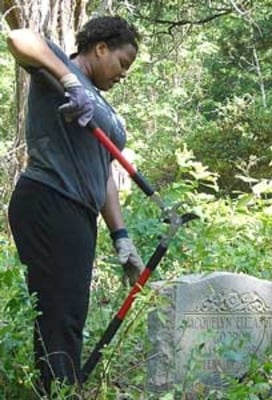 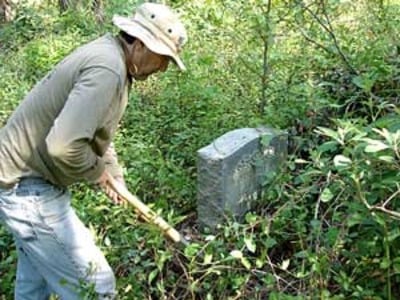 Gravestones were tumbled over and covered in vines, but history lovers, volunteers and some family members gathered Saturday at the Zuber Cemetery to set things back in place.

Ann Chambliss drove all the way from metro Atlanta to lend a hand and see if she could find out more about her family, many of whom are buried in the overgrown cemetery located north of Dillards Music Park on Calhoun Road.

My great-grandmother on my fathers side was buried over there, said Chambliss. She was born about 20 years into slavery. Im so glad to see this. Thats our history and I like to see it preserved.

Family members had been denied access to the cemetery until recently, and volunteers were drawn to the site with a desire to help.

Since Ive been aware of the cemetery and know the family, Ive said that Id love to come in and help them clear it out, said Sue Hiller, planning director for Rome and Floyd county.

According to the Rome Historic Preservation Commission, the 3-acre cemetery was purchased in 1903 by the Zuber, Dozier, Bell and Watters families to be used for a burial ground. In addition, family names such as Kennebrew, Phelps and Ware also adorn the headstones.

It amazes me that as old as some of these headstones are that the family members paid that much money to mark their loved ones back then, said County Commissioner John Mayes. I really just came to volunteer, but my mom was a Zuber, and my grandparents name was Kennebrew.

It saddens me that there are so many depressions in the ground without headstones, said Mayes.

For some, cleaning up older neglected gravesites has become a pastime.

Were here because its gotta be done, said Pat Millican, president of the Floyd County Cemetery Preservation Committee. I started at the Antioch Cemetery because my husbands family was buried over there. We started and then more and more people showed up.

UK urges people to get healthier after lockdown weight gains

Man, 75, killed when car stopped on I-95 in Broward County triggers multi-vehicle crash