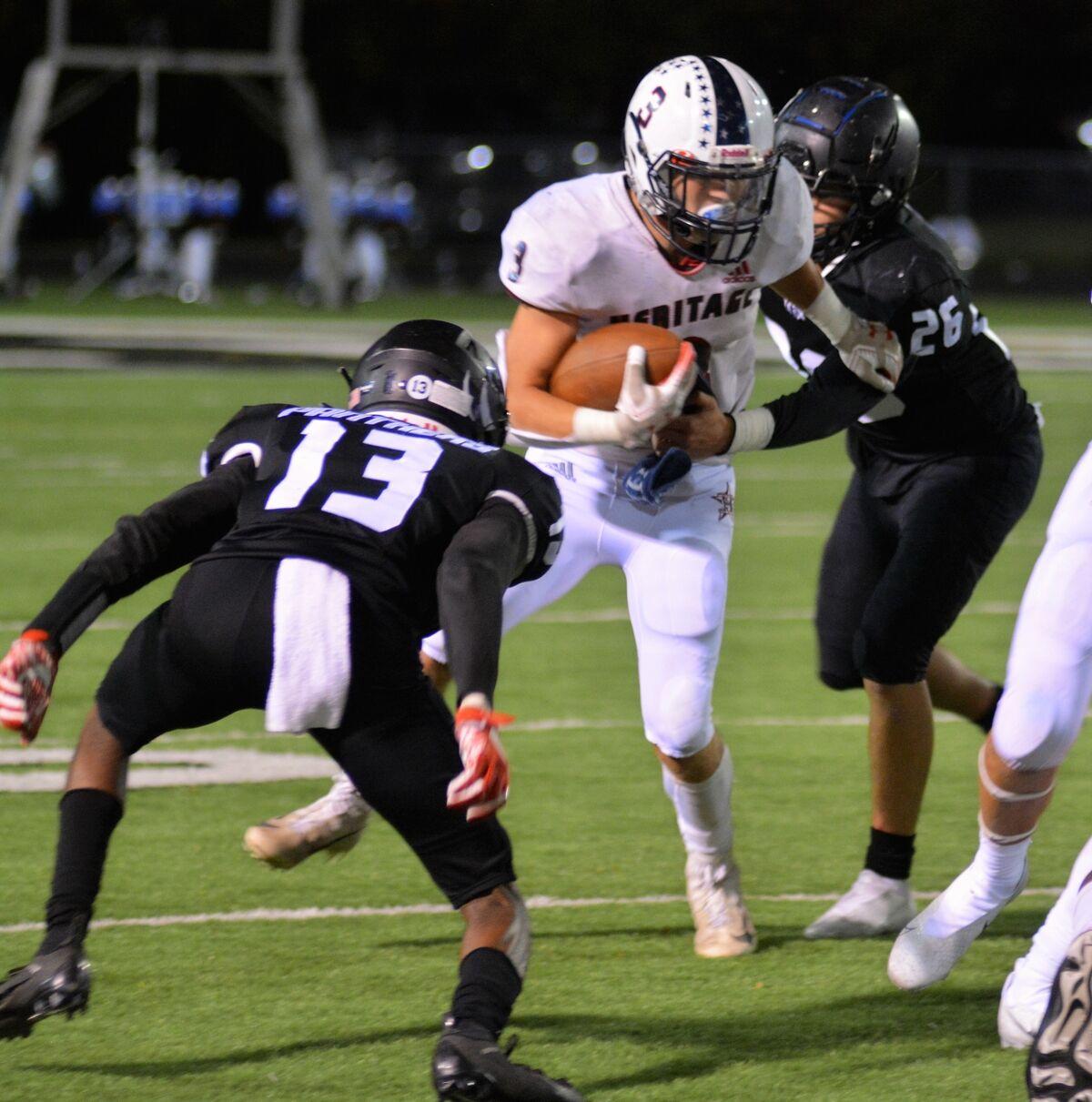 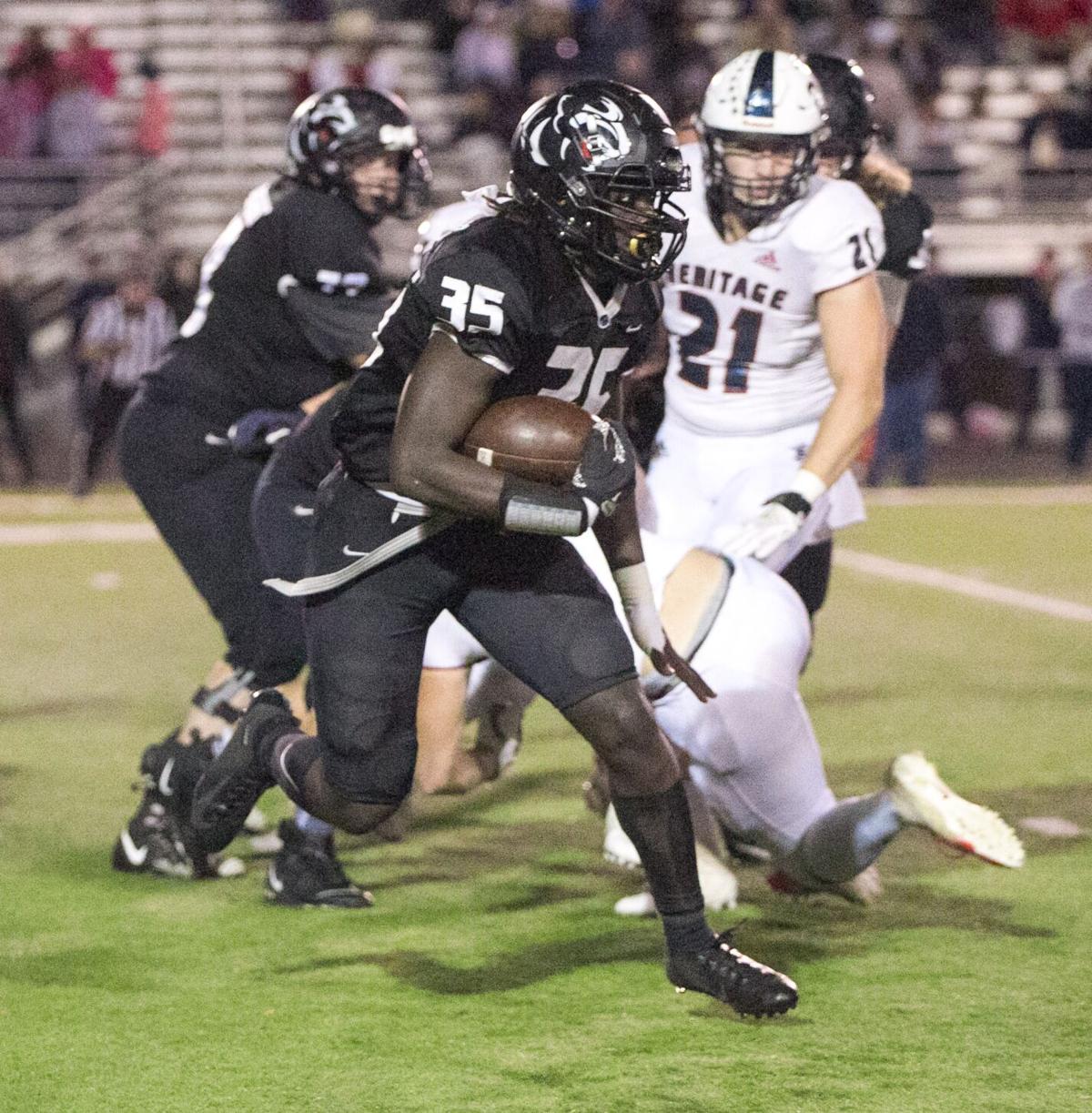 Ridgeland’s Jeremiah Turner rushed for 220 yards and a pair of long touchdown runs before sealing the Panthers’ 21-14 win over Heritage with a late fourth-quarter interception. Turner also had a sack and finished with six tackles.

Ridgeland’s Jeremiah Turner rushed for 220 yards and a pair of long touchdown runs before sealing the Panthers’ 21-14 win over Heritage with a late fourth-quarter interception. Turner also had a sack and finished with six tackles.

Bolstered by a huge night on both sides of the ball by Jeremiah Turner, the Ridgeland Panthers snapped a season-opening five-game losing streak with a 21-14 victory over Heritage at Bowers and Painter Field on Friday night.

With the victory, Ridgeland (1-5, 1-0) finds itself in a tie atop the Region 7-AAAA standings with Central-Carroll and Cedartown as they look to make it back-to-back region titles.

“I’ve said it since before the season started, there’s something special about this bunch,” said head coach Kip Klein, who praised his team postgame for ‘staying the course’ despite an 0-5 start against a quintet of teams with a combined 17-7 coming into last Friday’s games. “We played those guys at the beginning of the year because we want to get better for the playoffs. We hadn’t shown too well this year, but we’ve seen good things each week.

“(Friday) was a testament to my assistant coaches and our players just following the gameplan we put together.”

The only points of the first half came on a 44-yard touchdown run by Turner on the Panthers’ first possession of the game, one of a number of big plays the senior made during the night, while the rest of the half would be a battle of field possession and punts.

Heritage (3-3, 0-1) had a chance to put up points at the end of the half on a 42-yard field goal attempt, but a bobbled snap would result in Anderson Britton’s attempt being blocked and Ridgeland would sprint to the locker room still nursing a 7-0 lead.

The second half began with an incredible, tackle-breaking, 57-yard run by Turner and 10 yards were tacked on after the play following a penalty on the Generals. However, the Panthers would cough up the ball on the very next play, thwarting a golden scoring opportunity.

But after picking up two first downs, Heritage was forced to punt from its own 40-yard line. Three plays later, Chase Watkins hit Ke’Sean Eubanks down the sideline for a 68-yard scoring strike. The Panthers opted for a conversion try, following an illegal substitution penalty the Generals, and Turner plowed his way in to increase the lead to 15-0 with 5:53 left in the third quarter.

“We opened the second half with that big run and then we fumbled it,” Klein said. “That could have been a place where our guys hung their heads, but they didn’t and that’s a true testament to them and to our coaches. We’ve had great practices the last two weeks. The kids haven’t been pointing fingers. They’re all looking to help each other and be there for each other and that helps a lot.”

Heritage answered with a 47-yard touchdown drive, all on the legs of Paxton McCrary, who covered the distance in seven plays, including the final three that cut the lead to 15-7 with 2:05 left in the quarter. But just two plays into Ridgeland’s ensuing possession, Turner took a handoff, broke through a wave of would-be tacklers, and sprinted 85 yards for his second big-play touchdown of the night to make it 21-7, with a little more than a minute left to play in the third period.

The Ridgeland defense held on fourth down at its own 27, but after having to punt it back to the Generals early in the fourth, Heritage used catches by Cade Kiniry and Logan Lowe to help set up a 1-yard sneak by quarterback Nick Hanson. Britton’s kick cut the lead down seven points with 6:38 to play.

A 15-yard Ridgeland penalty during the extra point would allow the Generals to kick off from the 50 and Kaden Swope would recover an onside kick after the Panthers were unable to field the ball cleanly. But Cade Dunn would make a big tackle for loss on third down and an incomplete pass on fourth down gave the ball back to Ridgeland at its own 33-yard line with exactly four minutes left to go.

Another 15-yard personal foul penalty on the Panthers would bog down the drive and they were forced to punt it away with 2:45 still on the clock. Hanson’s first two passes of the ensuing drive fell incomplete, but looking to set up a screen pass on third-and-10 at the Ridgeland 46, Turner came up with one final huge play as he jumped the route for an interception to effectively seal the victory with 2:20 to play.

Turner had 11 carries for a career-high 230 yards. Watkins completed 3 of 7 passes for 94 yards, while Eubanks picked up 75 yards on two receptions. Sam Dickson booted a pair of extra points.

Hanson completed 10 of 22 passes for 110 yards on the night for the Generals, while McCrary was the workhorse with 27 carries for 112 yards, 98 coming on 19 second-half carries. Lowe led Heritage with three catches for 59 yards, while Travillian, Eli Owens and Jonathan Washburn all recorded sacks for the Generals.

The other big story of the night was penalties. Heritage was flagged eight times for 76 yards, but only twice after halftime, while Ridgeland was whistled 15 times on the night for 190 penalty yards.

Ridgeland will travel to Jasper this Friday for a region clash with the Pickens Dragons (2-4, 0-1), while Heritage will be back at home and will have its hands full against a solid Central-Carroll squad at 4-1 overall, 1-0 in the region, and sporting a four-game winning streak.

In pitch for Biden, Obama urges voters to cast Trump out

How to watch the final presidential debate between Trump and Biden