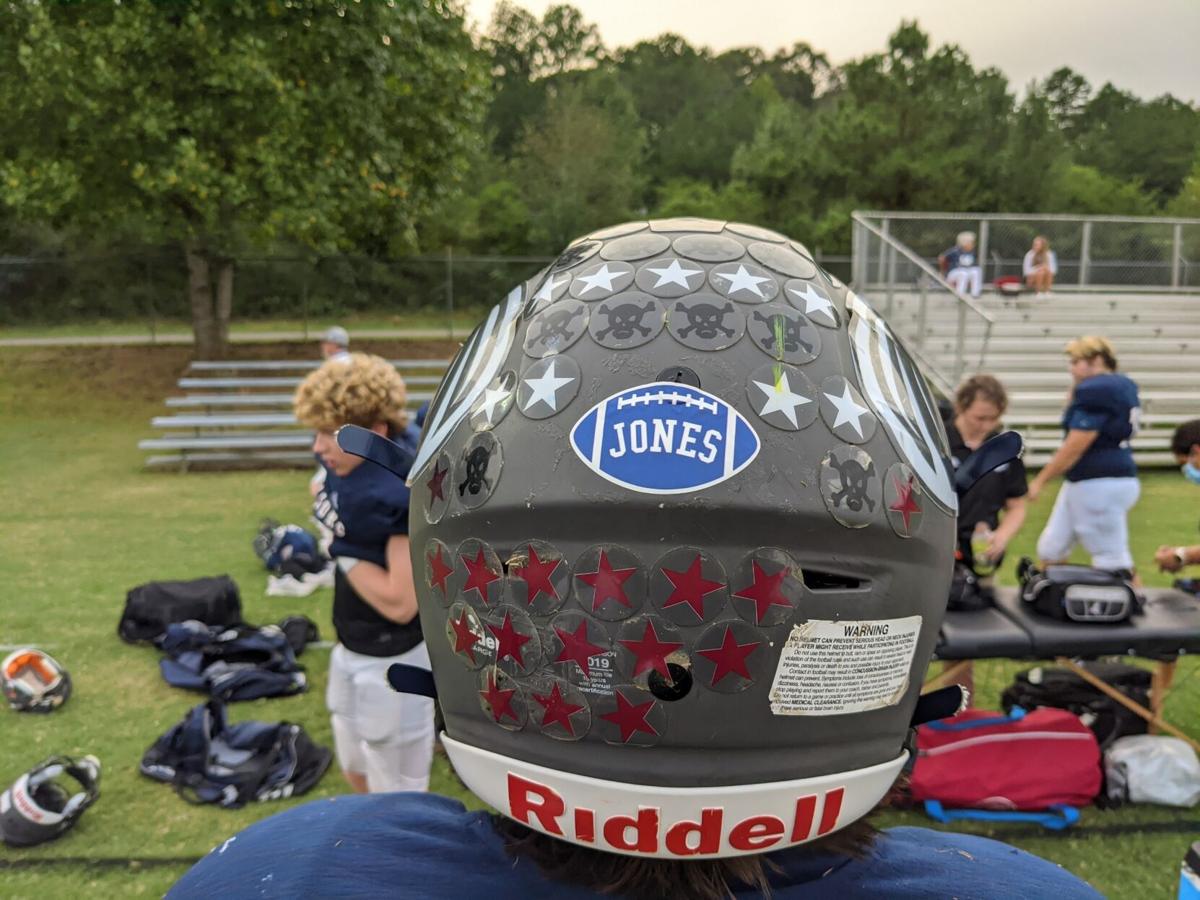 The “Jones” decal on the back of a Unity Christian helmet. The Lions will wear the decal for the remainder of the 2020 season.

Unity football Defensive Coordinator Samuel Mumpower speaks with the team prior to the Lions’ game against Fideles at Grizzard Park on Friday.

The “Jones” decal on the back of a Unity Christian helmet. The Lions will wear the decal for the remainder of the 2020 season.

Unity football Defensive Coordinator Samuel Mumpower speaks with the team prior to the Lions’ game against Fideles at Grizzard Park on Friday.

The Unity Christian Lions had every intention of playing Friday’s game for their head coach, Nick Jones.

They did just that and more.

Unity Christian (3-0) picked up their first home win of 2020 with a 74-6 showcase over the visiting Fideles Christian Rangers (1-2) at Grizzard Park.

“Really proud of the guys to maintain focus in the face of adversity,” Lions Defensive Coordinator Samuel Mumpower said in a phone interview. “We’ve got a lot of talented kids.”

“Had a really good night and he’s only a sophomore,” Mumpower said. “He’s one of our more athletic guys on our team.”

This past week as been a trying one for Unity Christian School and its football program.

Earlier in the week, Jones lost his mother in a high-speed auto collision in south Alabama. His father, also in the vehicle, was transported to a hospital in Pensacola, Florida, and is still undergoing treatment and recovery.

A moment of silence for the Jones family was held prior to kickoff.

The team decided to pay tribute to their head coach with a “Jones” decal, proudly displaying the family’s name on their helmets beginning with the Fideles game.

The decals are to remain a fixture to Unity’s helmets for the remainder of the 2020 season.

When asked about the emotion of the day prior to kickoff, Mumpower said there was a 100% increase.

“Just the bus ride down here, ... we will always say 123, win, they broke it down 123, Coach Jones,” Mumpower said before the game. “I hope our play reflects the way that we feel.”

UC totaled 310 yards of offense. Defensively, the Lions surrendered 57 yards to the Rangers. Tahari Tolbert snagged an interception he returned 35 yards for a pick six while Hudson Hill notched a scoop-n-score.

Unity Christian hosts Dominion Christian in the homecoming game this Friday, Sept. 25, at Grizzard Park. The Lions are hosting five of their currently-scheduled six remaining contests in Rome.

ATLANTA (AP) — Georgia Sen. Kelly Loeffler and Rep. Doug Collins both accused the other of lying and touted their own conservative credentials in their first debate, while Democrat Raphael Warnock assailed Loeffler for associating herself with a congressional candidate who has embraced basel…

ATLANTA (AP) — At 90 years old and living through a global pandemic, Hannah Carson knows time may be short. She wasted no time returning her absentee ballot for this year’s election.

Trump voted by mail in Florida's primary. Will he do it again in November?

Trump says Sudan to be removed from terrorism list

The Latest: Trump plans to debate Biden despite rule changes

Deadline looms, but COVID relief deal may be far off