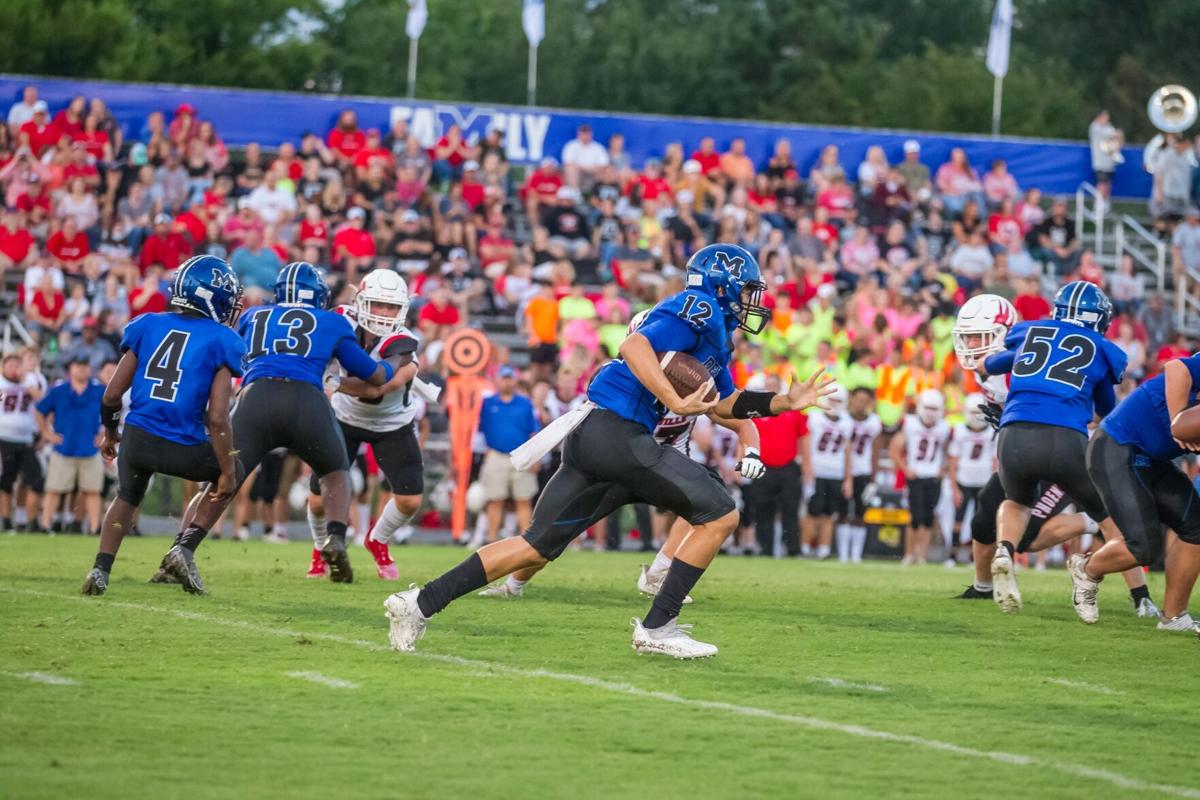 Model quarterback Landon Cantrell runs with the football against the Sonoraville Phoenix last week at Woodard-Tuggle Stadium. Model will face LaFayette on Friday in Shannon. 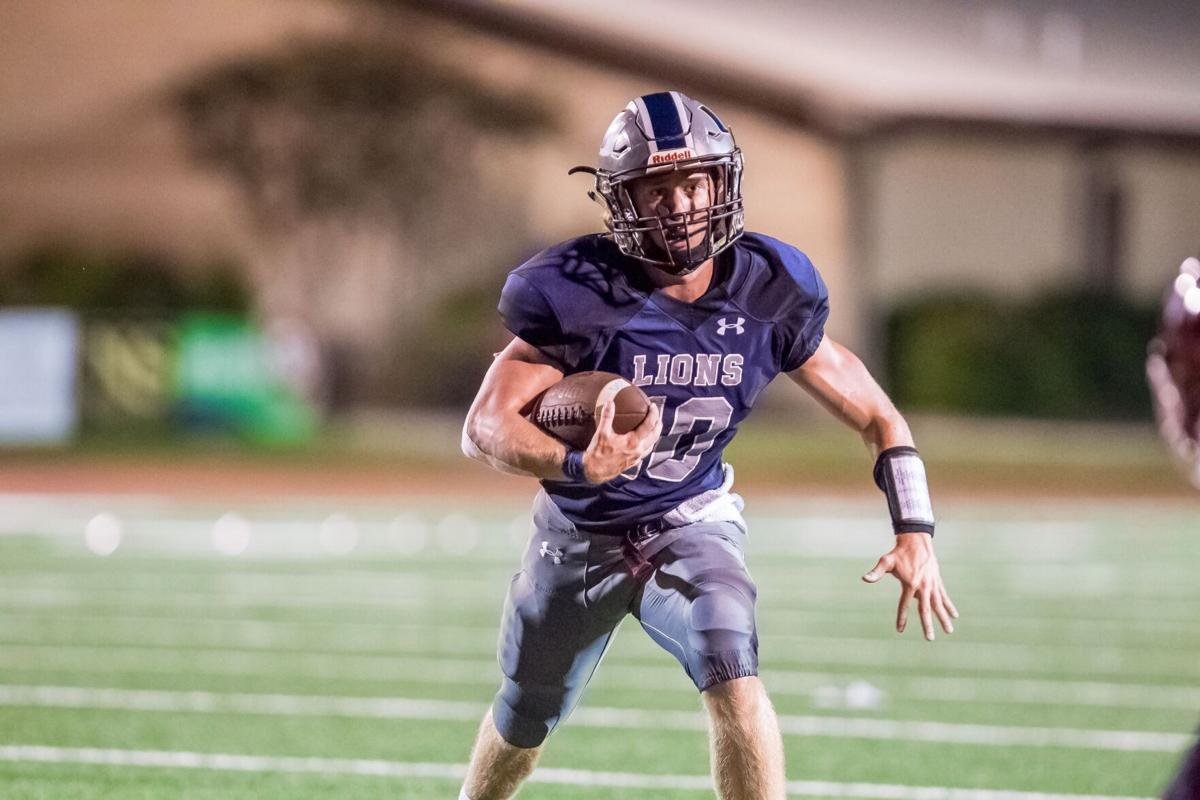 Model quarterback Landon Cantrell runs with the football against the Sonoraville Phoenix last week at Woodard-Tuggle Stadium. Model will face LaFayette on Friday in Shannon.

The second week of the 2021 football season is here and there are several teams preparing to do battle on the final Friday in August.

Here are the matchups involving Floyd County-based teams this week. All games begin Friday at 7:30 p.m. unless otherwise noted.

After a one-week delay, the Armuchee Indians are set to begin their 2021 campaign Friday on home turf against Towns County. Armuchee was scheduled to open its 2021 season against The King’s Academy last Friday in Marietta, but the game was called off due to COVID concerns.

Instead, Towns County played The King’s Academy, defeating the Knights 29-7 to start the year 1-0.

Armuchee head coach Jeremy Green enters his fourth season at the helm of the program, as the team aims for its first winning record since 2009.

Armuchee has a senior-led receiving core in Will Daniel, JJ House and Kameron Parker. Juniors Chandler DeSanto and Marty Seagraves could create a formidable duo at quarterback and running back, respectively.

Armuchee is looking to snap a four-game losing streak, stretching back to last October.

The Coosa Eagles are also set to kick off their 2021 schedule with a road trip north of the county line to Trion High School. This is part II of a home-and-home scheduled with the Bulldogs, dating back to the 2018 season when the teams met for the first time in 11 years.

Last season, Coosa came away with a 51-45 overtime victory over Trion. Coosa is 8-9-1 against Trion all time.

Expect senior offensive/defensive lineman Deolis Millsap to embrace a leading role with the Eagles as they go for their first winning record since 2017.

Hayden McBurnett, who started majority of last year at quarterback, is in line for another season under center for Coosa.

After a mid-week cancellation put the Darlington Tigers’ 2021 season opener in doubt, Darlington School found a new opponent for Friday in the Whitefield Academy WolfPack.

The WolfPack, coming off a 13-0 victory over Mount Vernon, will now travel to Chris Hunter Stadium to face the Tigers.

Whitefield Academy senior quarterback Cole Peterson led the way offensively, throwing 13-for-25 for 116 yards, one touchdown and one interception.

The WolfPack used three tailbacks during the contest. Howard Allen III garnered the most yards with 109 on nine carries with one TD.

The Tigers and WolfPack have only faced each other twice all time. Each school has one victory. The most recent meeting was a 6-0 Darlington loss on Nov. 3, 2017.

The Model Blue Devils aim to get back on track when they host the Class AAA LaFayette Ramblers Friday at Woodard-Tuggle Stadium. The Blue Devils are coming off a 21-0 shutout loss to the Sonoraville Phoenix last week.

Model struggled against Sonoraville, unable to finish off drives and garner much traction in consistently moving the sticks. Model’s defense, though, held Sonoraville in check for a good part of the evening.

Model is 5-10 all time against LaFayette. Last season, the Blue Devils escaped Walker County with a 21-20 triumph, but this season, the Ramblers enter Shannon facing a younger Model team.

LaFayette completed 2020 with a 4-7 record, losing to Cherokee Bluff in the first round of the Class AAA state playoffs.

After dropping their season opener to the Haralson County Rebels 43-24, the Pepperell Dragons now take their talents on the road to Heard County to battle the Braves. Heard County is coming off a 16-12 home win over South Atlanta last week.

This is the second year of a home-and-home between the Dragons and the Braves.

In a closely-contested battle last season, Heard County edged out Pepperell 36-29. Dragons quarterback Matthew Waddell went 9-for-14 for 147 yards, two touchdowns (one passing, one rushing) and one interception.

Expect Pepperell to feature Waddell and star running back DJ Rogers on offense. Coming off a near 1,500-yard 2020 campaign, Rogers started 2021 with two touchdowns on two carries before finishing the Haralson County game with 155 rushing yards.

Defensively, it’s a big adjustment for the Dragons, going from a rushing/option attack-minded Haralson County squad to a Heard County spread offense.

The Dragons are 1-3 against the Braves all time, with the lone Pepperell win a 27-7 drubbing in the 2019 opening round of the Class AA state playoffs.

“It’s going to be a test for us,” Hurst said when looking ahead to Heard County last Friday. “It’s a great place to play (at) down there. I think our kids will be up to the challenge.”

After a 60-20 season-opening win over Victory Baptist, the Unity Christian Lions look to run their win streak to 14 games as they welcome Hearts Academy to Rome.

Unity Christian’s offense did not seem to lose much in the quarterback transition from Drew King to John Nance, as the Lions overpowered the Warriors in game one.

Unity Christian remains a force to be reckoned with within the Georgia Association of Private and Parochial Schools (GAPPS) as the defending state champions.

The Hearts Academy Panthers will play their first game of the season when they meet the Lions Friday at Grizzard Park. Hearts Academy went 1-8 last season.