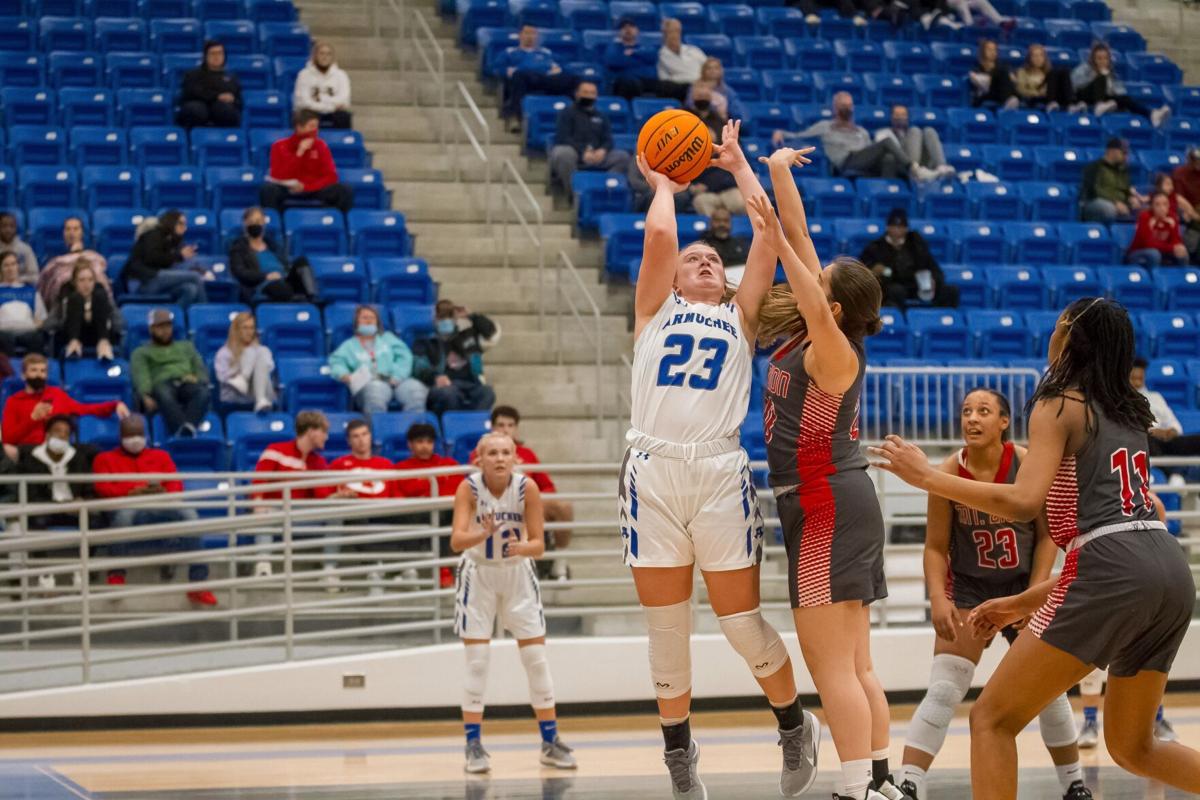 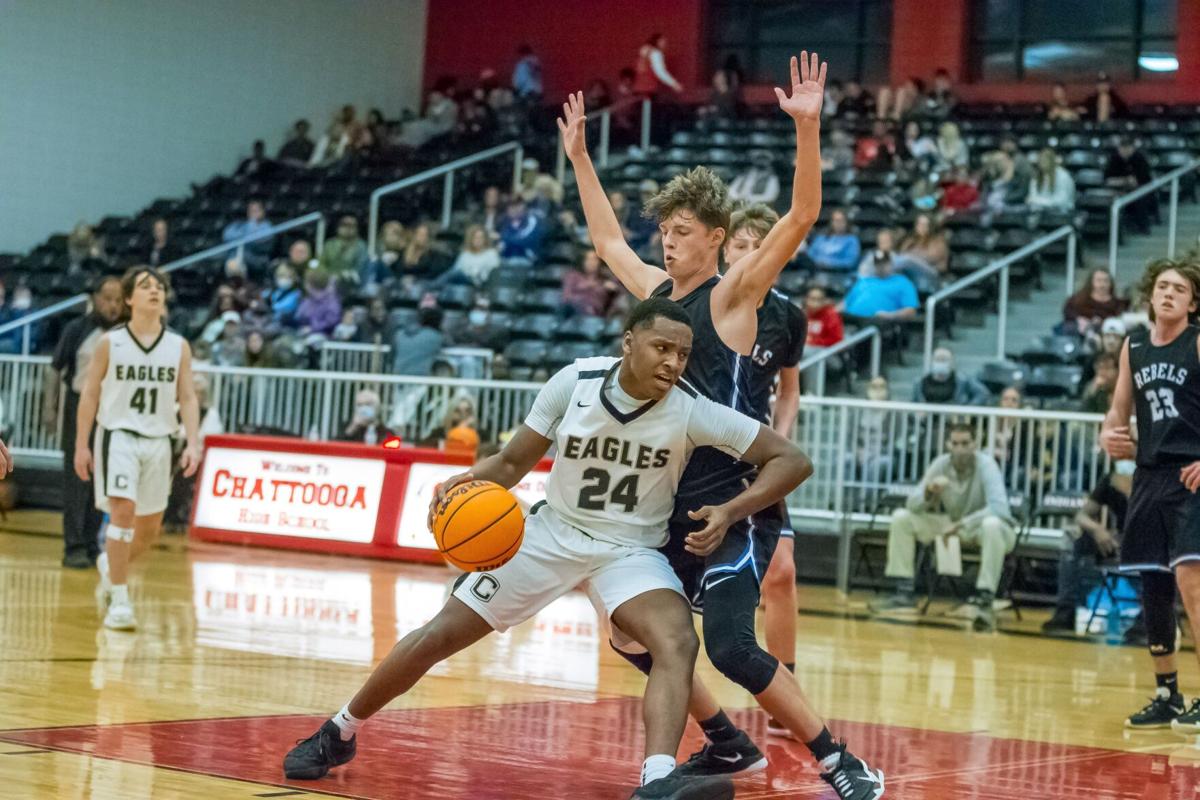 Coosa’s Jaquze Morgan battles inside the paint during a region tournament game against Fannin County at Chattooga High School on Friday, Feb. 12.

Coosa’s Jaquze Morgan battles inside the paint during a region tournament game against Fannin County at Chattooga High School on Friday, Feb. 12.

The victories and defeats, who’s still fighting and who’s been eliminated, plus where teams could end up in the state playoff brackets. We have that and more here in this varsity basketball region tournament roundup, organized by school name.

The Armuchee Lady Indians entered the Region 6 Class A-Public region tournament as the No. 2 seed. That earned them a first-round bye, setting up a battle with No. 3-seed Mt. Zion in the semifinals.

The Lady Indians took care of business on home court 46-27. The win clinched a first-round home playoff game. Armuchee now prepares for a duel with Region 6-A Public’s No. 1 seed Trion with the region championship up for grabs Tuesday night.

The Armuchee Indians have been eliminated from state playoff contention after falling to B.E.S.T. Academy in the second round of their region tournament. Armuchee entered the region tournament as the No. 6 seed, fending off No. 7-seed Trion 57-52 the day prior to the meeting with B.E.S.T.

The Chattooga Lady Indians (11-6, 8-4 Region 7-AA) entered the Region 7-AA Girls Basketball Tournament as the No. 3 seed. The Lady Indians secured a 60-26 victory over the Pepperell Lady Dragons to secure a state playoff spot. They battle No. 2-seed Dade County on Tuesday at Chattooga High School with a spot in the region championship at stake.

The Chattooga Indians (16-2, 12-0 Region 7-AA) are the hosts of the Region 7-AA basketball tournament after going a perfect 12-0 during regular-season region competition.

The Indians earned a bye to the region semis and will battle No. 4-seed Coosa for a spot in the region title game, looking to extend their win streak to a baker’s dozen.

The Coosa Lady Eagles, as the No. 7 seed, were eliminated from the first round of the Region 7-AA Girls Basketball tournament by the Pepperell Lady Dragons.

The victory saw Coosa clinch a state playoff berth and set up a meeting with the Chattooga Indians on Tuesday at Chattooga High School. A trip to the region championship will be on the line.

Both of Darlington’s basketball teams know their respective seeding for the Class A-Private state playoffs.

The Model Lady Devils were eliminated in their first game at the Region 7-AA Girls Basketball Tournament by the score of 51-48 at the hands of the Gordon Central Lady Warriors. Model’s season closes at 10-11 overall and 5-7 in Region 7-AA.

The Model Blue Devils, as the No. 2 seed of Region 7-AA, earned a bye to the region semifinals and clinched a state playoff berth after finishing the regular season 19-5, including 10-2 in region competition.

Their opponent will be the No. 3-seed Dade County Wolverines, fresh off a buzzer-beating 68-65 finish over the Pepperell Dragons last Friday.

Dade County and Model will tip off at 5:30 p.m. at Chattooga High School.

The Pepperell Lady Dragons’ 2020-21 season came to a close in the second round of the Region 7-AA tournament after falling to the Chattooga Lady Indians 60-26 last Friday.

Pepperell (7-15, 3-9 Region 7-AA) defeated Coosa to reach the second round, but could not muster much offense against host Chattooga. Morgan Willingham led the way with 11 points in the Lady Dragons loss.

The Pepperell Dragons, as the No. 6 seed, were on the verge of clinching a berth in the 2021 Class AA state playoffs, looking to pull the upset on No. 3-seed Dade County Wolverines.

However, up 63-53, the Dragons could not close out the Wolverines, falling on a 3-point buzzer beater by Dade County’s Brody Cooper, 68-65, last Friday. Dade County closed the game on a 15-2 run.

The Rome Lady Wolves (19-6,10-4 Region 5-6A) tip off their Region 5-AAAAAA tournament play Tuesday against the Dalton Lady Catamounts at Rome High School.

Rome, as the No. 3 seed, earned a bye to the second round. Meanwhile, Dalton cruised past Paulding County 72-33 in Whitfield County Saturday in their first-round matchup.

The Lady Wolves defeated the Lady Catamounts in both meetings during the regular season. The teams will tip off at 7 p.m. with a trip to the semifinals and a state playoff berth on the line.

The Rome Wolves (13-8, 8-6 Region 5-6A) will also be a No. 3 seed in the Region 5-AAAAAA Boys Basketball Tournament. Like the Lady Wolves, they welcome the Catamounts of Dalton to Rome High School Tuesday.

Rome defeated Dalton in both regular season meetings, but this time around, the stakes are much higher as the two will battle for a trip to the region semis and a state playoff berth.

The Wolves and Catamounts tip off immediately following the Rome/Dalton girls’ game.

The Trion Lady Bulldogs, as the No. 1 seed from Region 6-A Public, have already qualified for the state playoffs.

Now, they have their sights set on a region championship. But standing in their way are the Armuchee Lady Indians.

Trion booked a ticket straight to the semifinals as part of finishing Region 6-A Public at an undefeated 10-0.

The Lady Bulldogs and Lady Indians tip off at 7 p.m. at Armuchee High School.

Unity Christian’s basketball tournament has already wrapped up. The Lady Lions and Lions both earned No. 3 seeds from the Georgia Association of Private and Parochial Schools’ Division I-AA Region 1.

The Unity Lady Lions head out on the road and battle Harvester Christian Academy on Monday, Feb. 15.

The Lions face Central Christian School on the road Tuesday at 7 p.m.

AP PHOTOS: A week of rage over Spanish rapper's imprisonment