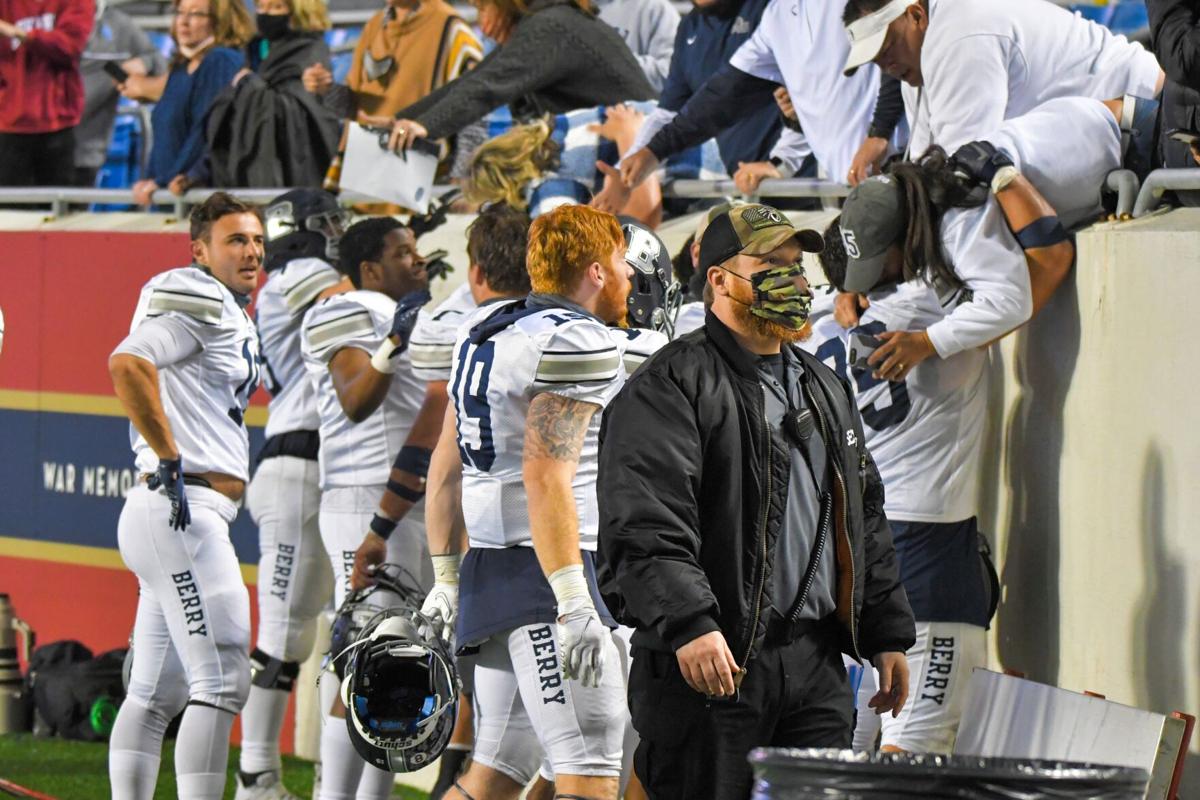 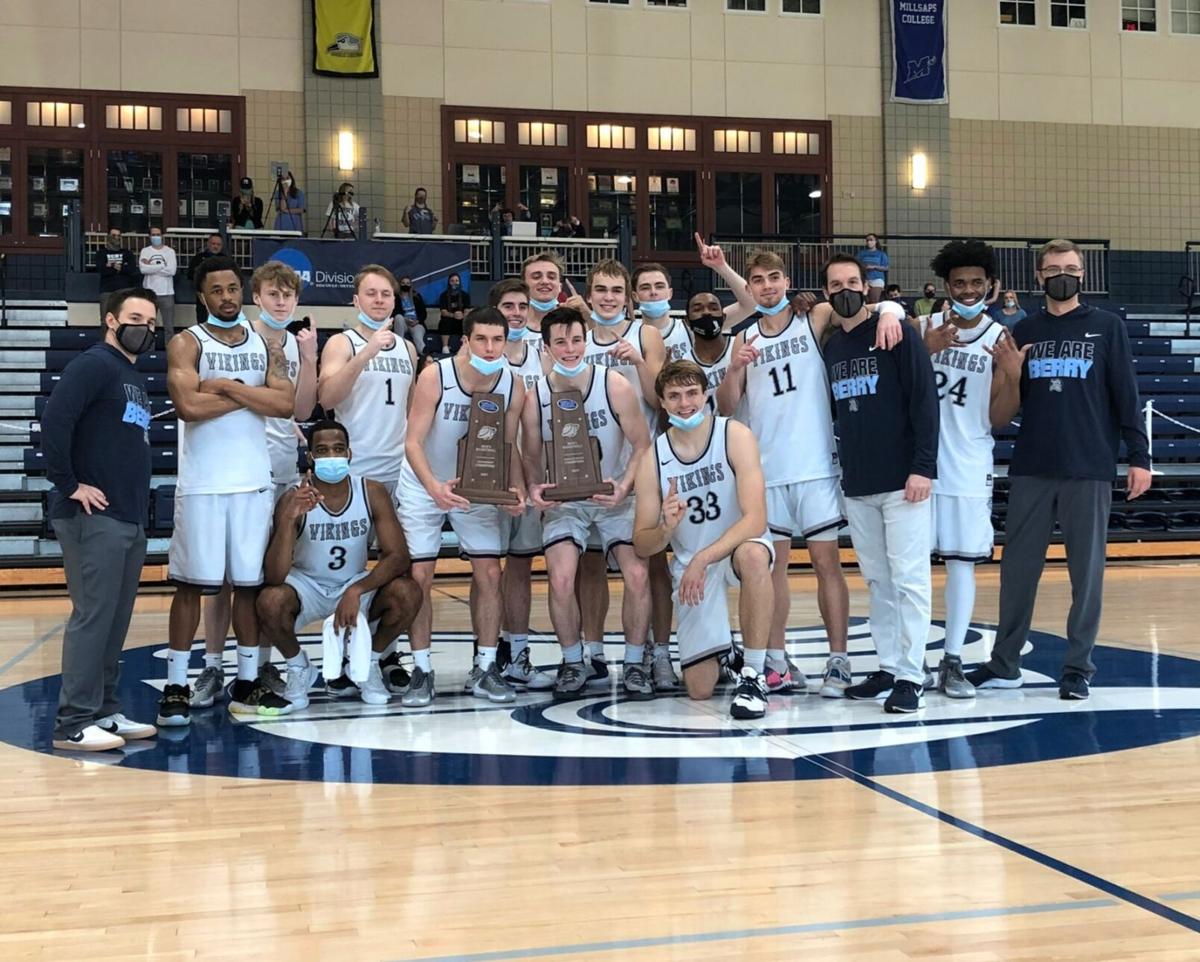 The Berry Vikings men’s basketball team poses for a photo after winning the 2021 SAA Championship at The Cage Center in Rome on Saturday, March 13. 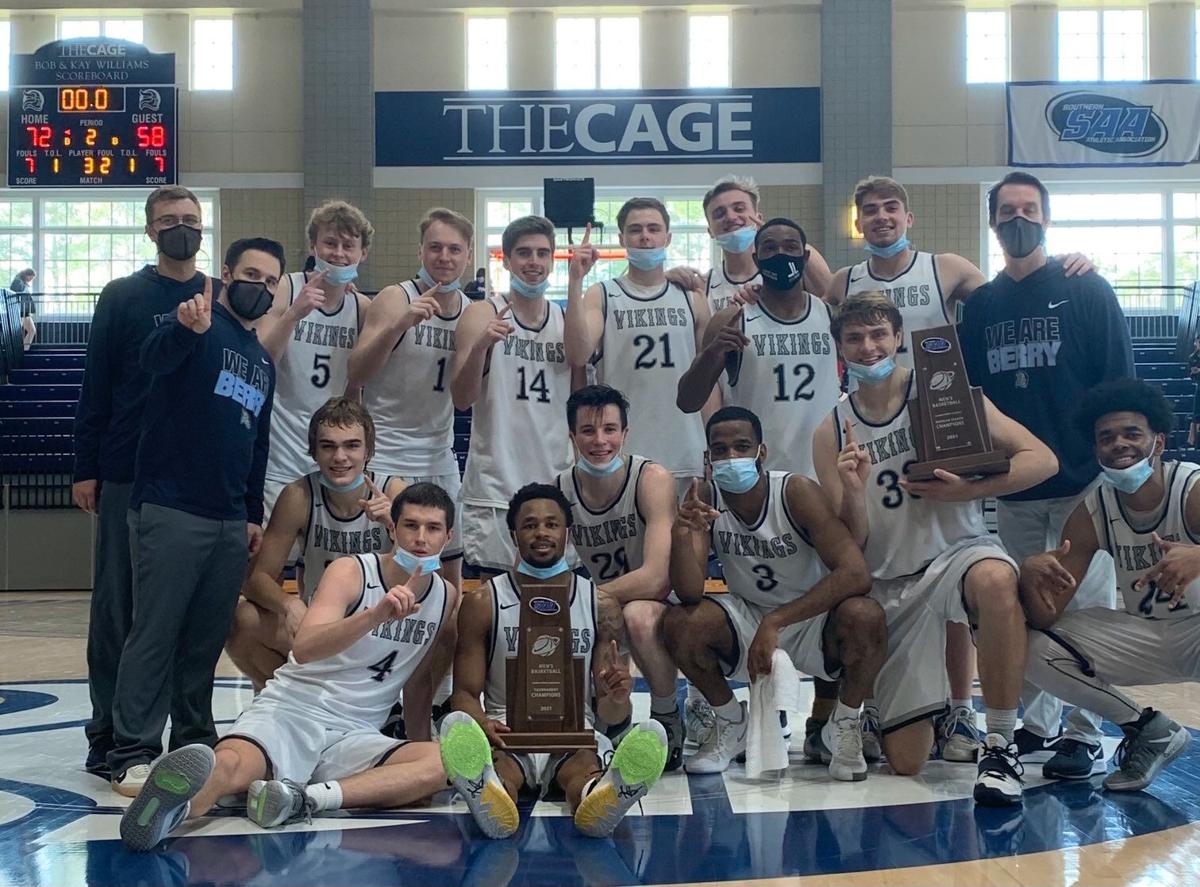 The Berry Vikings men’s basketball team poses for a picture after claiming the 2021 SAA Championship at The Cage Center in Rome on Saturday, March 13.

The Berry Vikings men’s basketball team poses for a photo after winning the 2021 SAA Championship at The Cage Center in Rome on Saturday, March 13.

The Berry Vikings men’s basketball team poses for a picture after claiming the 2021 SAA Championship at The Cage Center in Rome on Saturday, March 13.

It’s possible, and the possibility became a reality for Berry College football and men’s basketball, which both won Southern Athletic Association championships mere hours apart from each other two weeks ago.

Due to the COVID-19 pandemic, the SAA delayed the start of its college sports seasons, and as it turned out, both basketball and football would have championship games on the same day.

But with the pandemic came the uncertainty of whether there would even be a basketball or football season, and if so, what form it would manifest.

While the continuous uncertainty played out away from the court, Cole said it was not difficult to keep his team motivated, as just the competition against one another in practice kept the appetite for action satisfied.

Cole added he and his staff put together intra-squad games and had music on in the gymnasium, simulating what a real game would be like, despite the lack of fans in the stands.

“We knew we had a chance to be really good based on last year’s success,” Cole said. “When the opportunity presents itself, let’s be ready. Let’s go as if there will be some kind of championship or something to play for. When that opportunity came, we were ready. Once we started playing against other people, you could just see the light come on for our guys.”

“One of our core values is resilience,” Cole said. “There was always the thought of could our next two weeks be canceled, could the whole thing be canceled? I think just the mental obstacle of that, being able to overcome that, was big.”

Last winter, just days before the wave of COVID shutdowns began, Berry lost to Centre in the conference championship game 72-69.

This year, the conference title game almost did not feature the Vikings. After trailing by 12 at halftime, Berry needed a last-minute bucket to sneak past Hendrix College in the SAA semifinal 64-63.

Cole said the word that continually comes to mind about the game was resiliency.

“We’ve talked about that idea of ‘Hey, it doesn’t matter what the score is. It’s about the next possession, it’s about the next play, the next few minutes,’” Cole said. “We had some guys come off the bench and really step up. Chase Ellis ended up having a career high that day and scored the game-winning basket.”

Less than 24 hours later, the Vikings were 2021 SAA champions with a 72-58 win over Oglethorpe University to close the season 13-1 overall.

“They all just sacrificed and bought in and finished the job,” Cole said. “It was cool to see some of these seniors got out like that, even with a difficult years with lots of ups and downs, just to see the joy on their faces as they cut down the nets.”

From the court to the gridiron

Just as the nets were coming down in Rome, Berry’s football team was gearing up for a championship battle of its own 400 miles away in Little Rock, Ark. The Vikings were set to face Hendrix College with a fifth consecutive SAA championship on the line.

Berry took a 21-7 lead at halftime and held off a furious comeback to claim five trophies in a row, 21-20. The victory also gave Berry its first-ever undefeated season at 4-0.

“The thoughts going through my head immediately went to our senior class and I was like ‘Man, what a great way to go out for them,’” Kunczewski said. “This has been a challenging year for everybody, but to even get a chance to get out on the field and compete was one thing, but I thought our conference did a good job in making this last game special.”

Three of those four games were decided by a combined five points.

The first was a 26-23 come-from-behind thriller capped off by a Berry touchdown with 11 seconds left, the second a 2-point conversion in overtime for a 1-point win and the final one a defensive stand to keep the crown of SAA football in the Seven Hills.

“I think the way we did it showed a lot of resiliency,” Kunczewski said. “We’ve established a certain expectation here. Our guys are winners and they prepare a certain way. They don’t let the moment get too big for them. We have a saying here that we kind of learned this offseason ‘Chaos breeds chaos and calm breeds calm,’ so in those high-pressure situations at the end of the game, we want to remain calm and rely on what we practiced.”

Kunczewski said there were many challenges to begin with, from working toward an uncharted-territories spring season to recruiting to winter weather and, of course, the constant battle with COVID-19. Kunczewski said Berry football was testing for COVID three times a week.

“It was challenging in so many ways, but a lot of credit goes to our administration ... for giving us this opportunity and our athletic training staff,” Kunczewski said. “We never even got together as a whole team in the fall because of the COVID restrictions in place. The first time we met as a team was Jan. 11 when we reported to camp for preseason practice.”

The spring campaign was here and gone in just four weeks. Even prior to those four weeks, all the blood, sweat and COVID tests made it that much more worth it when the clock hit 0:00 in Little Rock as Berry officially its fifth consecutive crown.

For those seniors departing the program (the NCAA granted an extra year of eligibility), they go out with a 34-5 record overall.

Kunczewski said the spring 2021 team epitomized the toughness and resiliency it takes to make it through a 12 months unlike any other we have ever experienced before.

“When you look at how we won, to win three games by a total of five points, it showed the heart and determination and ... resiliency that this team showed,” Kunczewski said. “A lot of people ask me ‘OK, how were the games this spring? You only played four (games). There was no national playoffs.’ I can tell you this was as competitive as any game we’d play during the fall season.”

“I’m hoping we can bottle this up and carry it with us into the fall.”