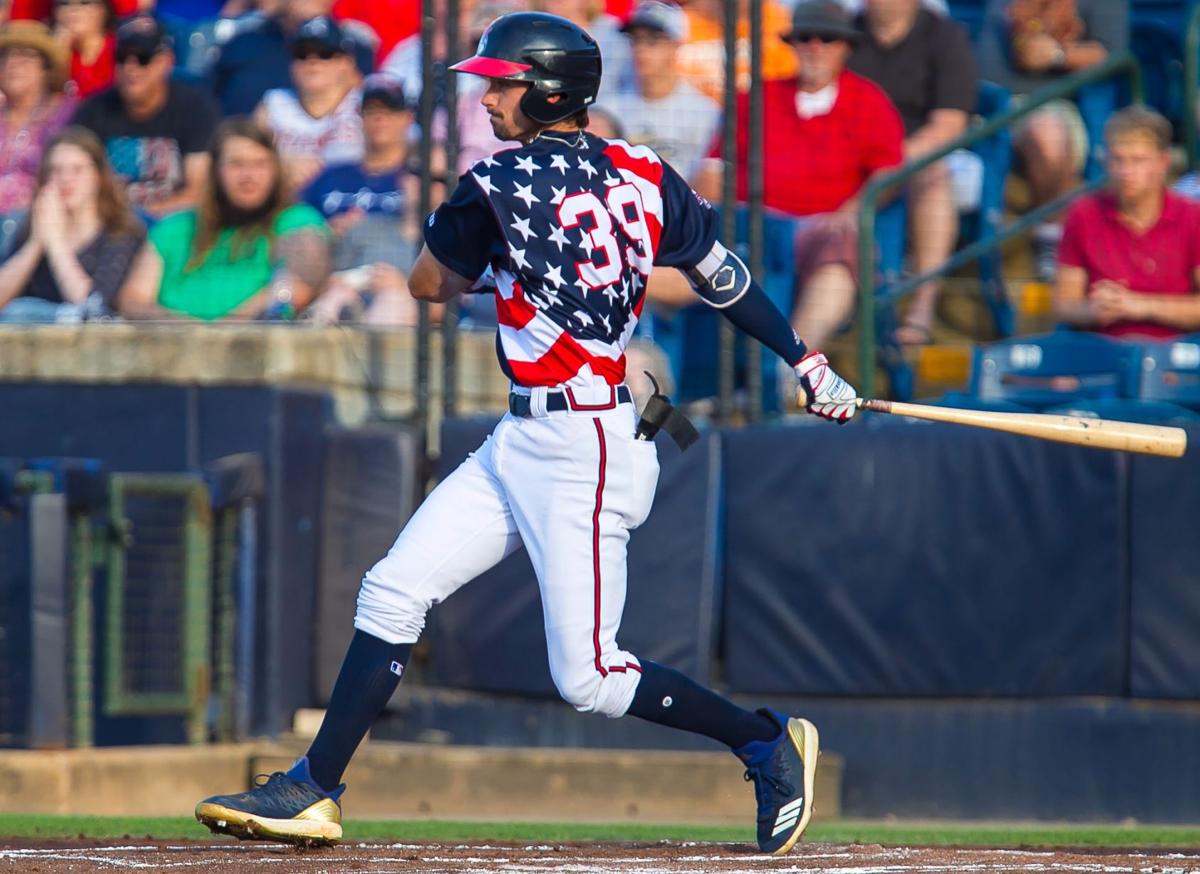 First-round pick Braden Shewmake has made a big impact at the plate in a short amount of time with the Rome Braves. 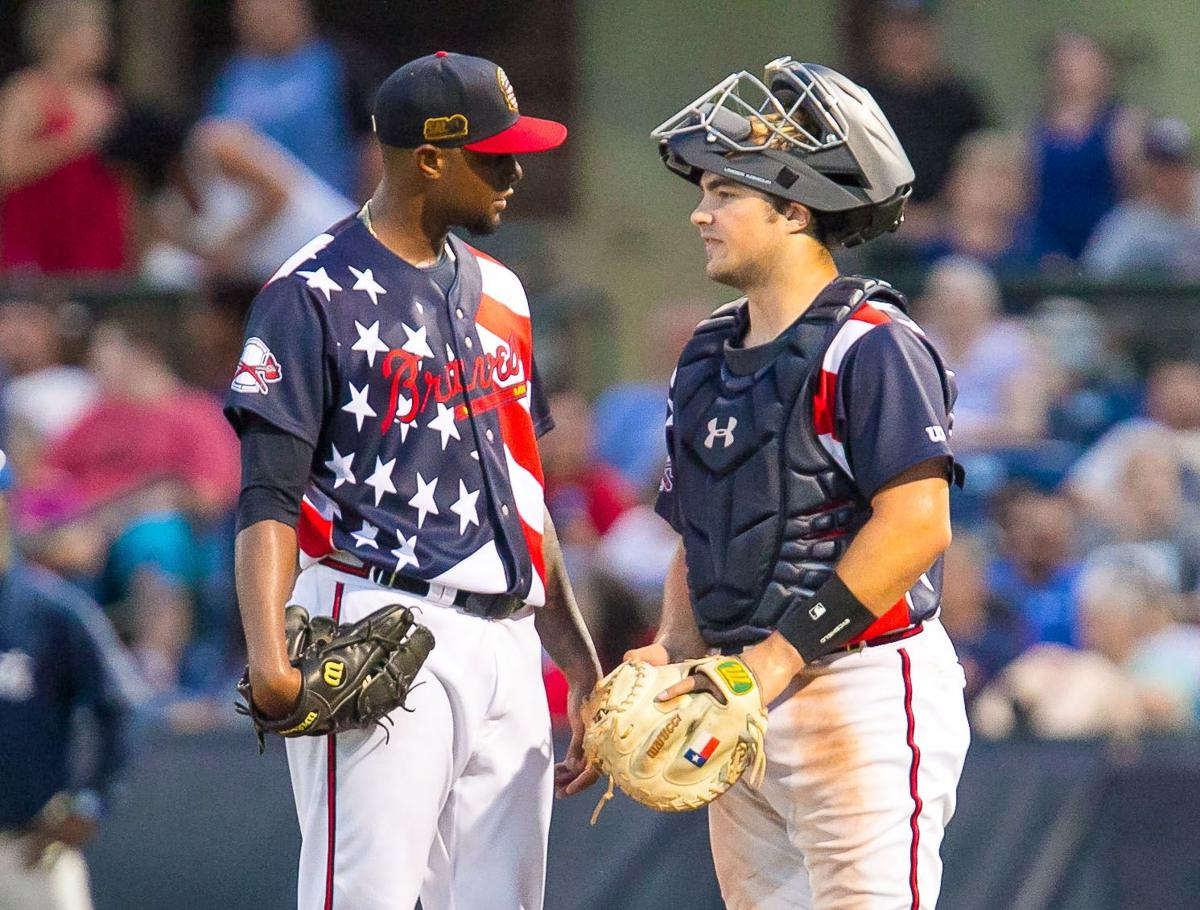 Rome Braves catcher Shea Langeliers (right) talks with pitcher Gabriel Noguera during the team’s Fourth of July game. Langeliers, the No. 9 pick in the MLB draft, is getting his first taste of professional baseball with the Rome Braves.

First-round pick Braden Shewmake has made a big impact at the plate in a short amount of time with the Rome Braves.

Rome Braves catcher Shea Langeliers (right) talks with pitcher Gabriel Noguera during the team’s Fourth of July game. Langeliers, the No. 9 pick in the MLB draft, is getting his first taste of professional baseball with the Rome Braves.

It’s more than a thousand miles from Texas to Georgia, but the Lone Star State duo of Braden Shewmake and Shea Langeliers are making themselves right at home.

The 2019 first-round MLB draft picks are getting their first taste of professional baseball with the Rome Braves and already making an impact.

“Shewmake is swinging the bat really well, and for the most part he’s done a fantastic job at short,” Rome manager Matt Tuiasosopo said. “He’s definitely gotten off to a great start with the bat. Shea, he’s great behind the plate. He’s done some nice things with the bat. He’s had some really good moments.”

Shewmake played at Texas A&M while Langeliers was at Baylor, both having known of each other throughout their high school careers.

Shewmake has caught fire recently for Rome with three multiple-RBI games over a span of eight contests prior to Saturday’s game. That includes going 3-for-5 with a triple and two RBIs in Friday’s 5-1 win over Asheville.

In 15 games with the Single A squad, the No. 21 pick in the draft posted a batting average of .438 with 14 runs and seven doubles, with 12 RBIs and a home run. Included in that is the series closer on the road against Kannapolis this past Wednesday where he went 3-for-5 with two runs scored and two RBIs.

“I couldn’t ask for a better team to come in and play for,” Shewmake said. “The guys in the clubhouse are amazing. It’s a lot of fun coming to the yard every day. They make playing baseball easy.”

“You can’t try to do too much,” Shewmake said. “Some of the guys who have been here for a little bit let us know that early, so it was an easy adjustment for us from that standpoint. Bobby’s done a great job with my swing. He gives me little adjustments here and there. We’ve had a really great relationship. Bobby’s been a huge help.”

Langeliers, the No. 9 pick in the draft, agreed the team and coaches have helped make the jump from college to professional baseball an enjoyable process.

“It’s super exciting,” Langeliers said. “The biggest thing for me is calling my own game, because in college you don’t get to. Working with (pitching coach Kanekoa Texeira), I get to talk to him between innings and try to notice things that hitters are trying to do at an at-bat.”

Through 11 games, Langeliers has nine RBIs and five runs scored with a batting average of .209.

While Shewmake and Langeliers have been on the team since last month, a more recent addition is outfielder Drew Campbell.

While he hasn’t had as much time to get going with the Braves, Tuiasosopo is still impressed with the 23rd round pick out of Louisville.

“Drew is an athlete. He’s a very athletic kid,” Tuiasosopo said, adding that it’s important to be patient with players just getting into pro ball.

“Let them play. Let them go. Go show your tools. Play your game,” he said. “They’re working hard and getting adjusted to the professional lifestyle. They’re doing a good job. They just got right into the mix of things really well with the guys. They just jumped right in and it’s been like they’ve been here all year.”