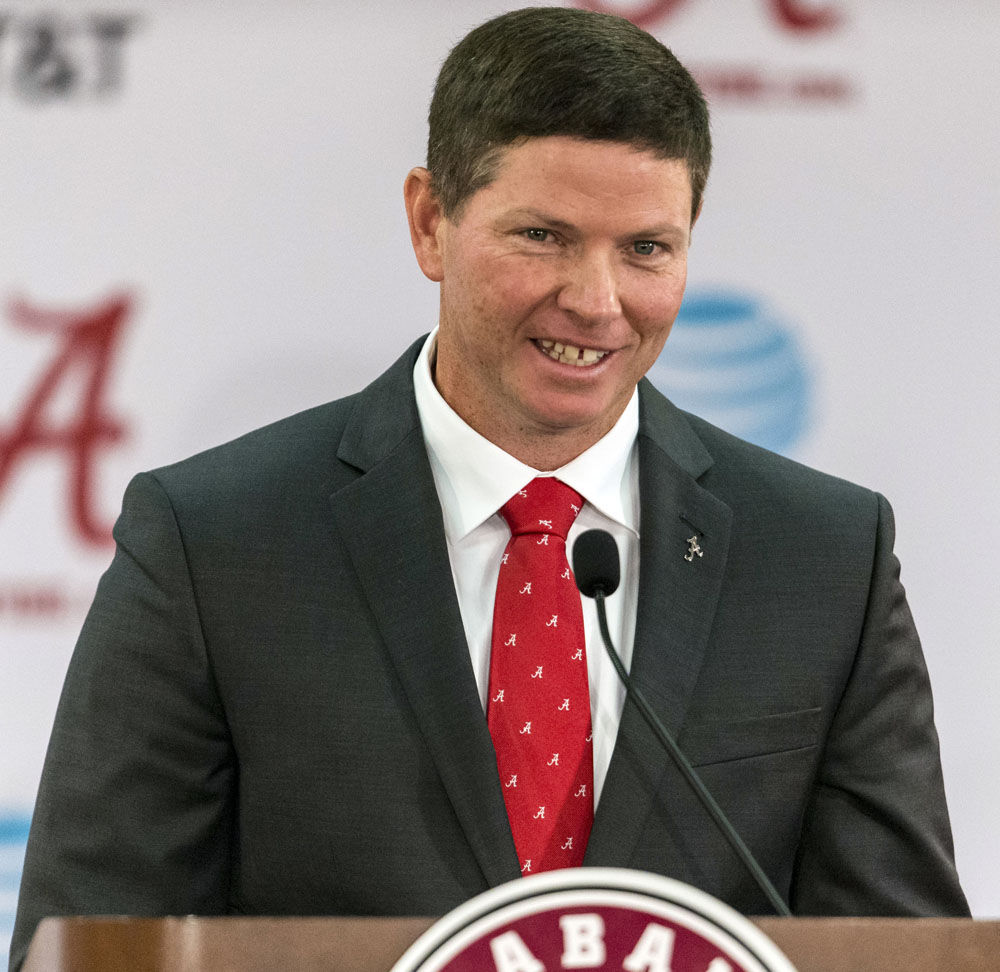 Brad Bohannon speaks during a press conference where he was introduced as the new head coach of Alabama's NCAA college baseball team, in Tuscaloosa, Ala., Monday, June 5, 2017. (Vasha Hunt/AL.com via AP) 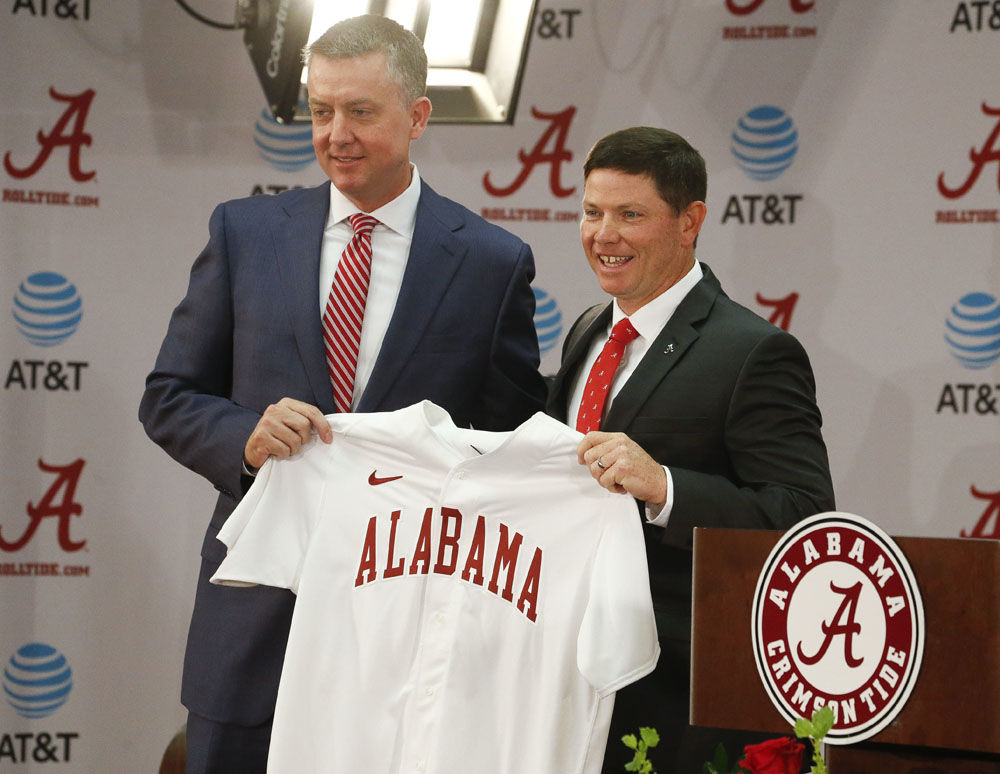 Brad Bohannon speaks during a press conference where he was introduced as the new head coach of Alabama's NCAA college baseball team, in Tuscaloosa, Ala., Monday, June 5, 2017. (Vasha Hunt/AL.com via AP)

Brad Bohannon’s had quite the week.

Between being an assistant with Auburn in the NCAA Tallahassee Regional to being introduced as the new head baseball coach at Alabama, the Floyd County native admits he hasn’t had a chance to simply take in the moment.

Still in Tuscaloosa, he hasn’t even begun to think about moving his home and family from Auburn.

But whether playing in his backyard as a kid in Lindale, playing his prep career for Darlington or serving as an SEC assistant coach, Bohannon’s been ready to work when it comes to baseball. It is a sport he’s loved his entire life, and that passion has taken him to the national stage of college baseball.

“I think any athlete would want to be described as confident and intense and gritty, and that was certainly me,” Bohannon said this week. “I’m glad my mom and dad instilled those qualities in me, and those are things I try to still emphasize every day in my career going forward.”

Last week, Alabama announced Bohannon as the 32nd head coach in program history, followed by an introductory press conference on Monday. The move comes after 16 seasons as an assistant for programs at Wake Forest, Kentucky and Auburn.

But Bohannon’s baseball roots originate in Floyd County, where he started playing as soon as he could stand. Growing up during a time when travel teams either didn’t exist or were in their early stages, he never left Floyd County to play baseball.

There was little escaping the sport, however, with Bohannon’s father, Dan, and his older brother, Chad, both playing the game as well.

“Parents always say it’s amazing what you pick up on when you are younger,” Bohannon said. “And when you’re playing in the yard with your brother all day, then playing with your dad when he gets off work, those are things you keep with yourself going forward.”

Gus Bell, the Darlington head coach who would go on to win more than 400 games at the school, could see Bohannon’s intensity from the start. Bell calls Bohannon one of the two best players he’s ever seen in 45 years of coaching, the other being current major leaguer Byron Buxton. Playing both shortstop and pitcher for the Tigers, Bohannon was the kind of athlete who thrived when the moments got big.

“It wasn’t just about all the home runs and RBIs he had. Whenever we needed anything, we could go to him,” Bell said. “There are some pitchers who want to be on the mound in the big moments. Well Brad was the guy who wanted the bat in those situations.”

Alongside fellow talented seniors like Jason Dillon and Bill Bell, Bohannon played an integral part on a Darlington team that won a Region 6-A title in 1993, including hitting three home runs against Trion in a decisive Game 3 against Trion in a regional playoff series.

After one season at Vanderbilt, the shortstop got a chance to play for Georgia Tech, the school he rooted for growing up. But as younger players began to play ahead of him in Atlanta, his competitive side pushed him to find another school where he could be an everyday starter.

He ended his collegiate career back in Rome, playing for Berry College in 1996 and 1997. He tallied 67 and 58 RBIs, respectively, in his two seasons at Berry, both of those marks among the 10 best individual seasons in program history.

“I am really thankful of all three chances I had,” Bohannon said. “Going from playing the SEC as a freshman, to being a role player to being one of the better players on the team, each experience helped me in being a coach.”

As he began his coaching career, Bohannon made it a top priority to recruit kids who loved and respected the game, like he did as a player. The technique worked, and he became one of the most well-known recruiters in the country.

At Kentucky, he was responsible for signing 13 players who went on to play professional baseball. That includes A.J. Reed, a first baseman and pitcher who won the Golden Spikes Award at Kentucky in 2014 and spent time last season with the Houston Astros.

Getting players like Reed and assisting in the turnaround of Kentucky’s program helped Bohannon win the 2015 ABCA and Baseball America National Assistant Coach of the Year.

“You better recruit those competitive kids from the start,” Bohannon said. “You want the opportunity to make the big hit or make the big pitch because that’s not an instinct you can develop. It is an instinct that you’re born with.”

Perhaps Bell’s favorite story about Bohannon is one the new Alabama coach would like to forget. It came right after the series against Trion, during the three-game 1993 region championship series against Bowdon.

After notching two hits to help his team win Game 1, Bohannon popped out early in Game 2 and ended a potential rally. Just as Bell began to prepare for the bottom half of the inning, an umpire approached and informed him that Bohannon had been thrown out of the game.

Initially confused, Bell then saw a bat lying down the first base line. Bohannon’s passion had got the best of him, and he had sent the bat flying down the base line. Darlington went on to win the series, but it was a moment Bohannon has held onto throughout his career.

“I think it was a display of passion and immaturity, and I feel I have matured in every way, shape and form since then,” Bohannon said. “But that passion is still there, I still love what I do and I’m going to do what I can to win. That’s why the scoreboard is there.”

Bohannon’s passion was on display as he took questions from reporters in his introductory press conference and as he begins to form a coaching staff at Alabama. His final game at Auburn came Monday night — a few hours after being introduced at Alabama — when the Tigers fell to Florida State 8-7 in 10 innings.

Fall practice is months away, but that does not mean the work has stopped. At some point, Bohannon is going to get a chance to move his stuff to Tuscaloosa and settle in to the new job. But even in the thick of such a busy week, the kid from Floyd County can’t complain about the sport that’s been with him his whole life.

“I love baseball, but even more than that, I love the relationship with the players and I love to compete,” Bohannon said. “If I had a different job, I would really miss those wins and losses.”