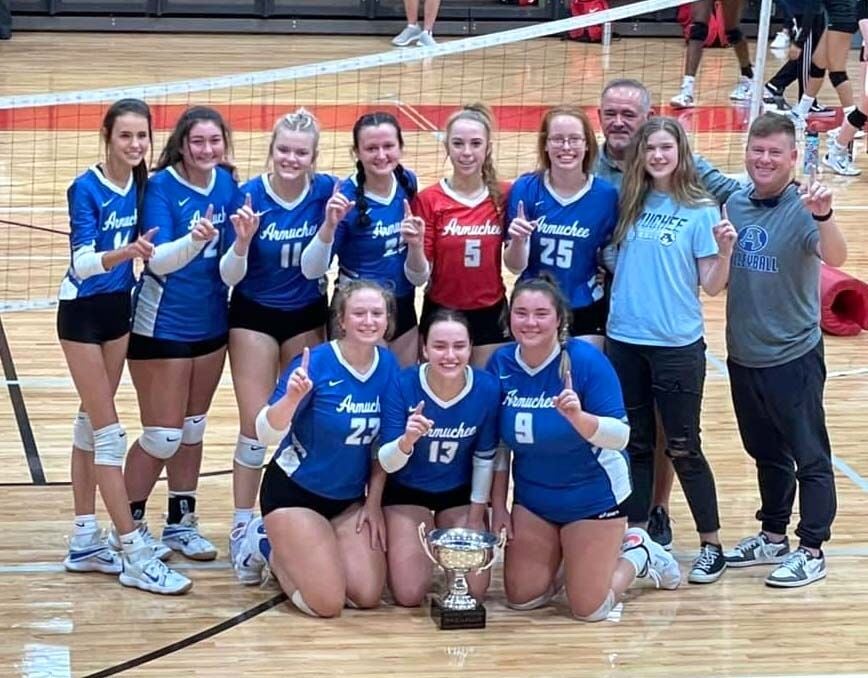 The Armuchee Lady Indians pose for a photo with the first-place trophy after winning the Battle of the Counties Tournament at Rome High on Saturday.

The Armuchee Lady Indians pose for a photo with the first-place trophy after winning the Battle of the Counties Tournament at Rome High on Saturday.

It was an impressive and historic Saturday for the Armuchee Lady Indians volleyball team as they not only went undefeated in four matches but also claimed their first-ever tournament title in program history.

The Lady Indians (15-2) were solid from start to finish as they ran off a 4-0 mark to be crowned champions of the Battle of the Counties Tournament at Rome High.

“I was also very proud of our girls. It was a long day. We played our first game at 9 a.m., and when we finished the championship game, it was almost 6 p.m. I was proud of their focus and resilience and being able to pull out a big win. This was a good test before we begin region play on Tuesday.”

The first two wins pushed the Lady Indians into the semifinals where they faced off with tournament host Rome, and it took three sets in a back-and-forth match to defeat the Lady Wolves. Rome took the first set 25-21, but Armuchee bounced back in the second set for a 30-28 advantage. It all came down to the third set, which the Lady Indians gutted out for a 17-15 win to take the match.

After Rome battled back from the loser’s bracket, the two teams squared off once again in the best 3-of-5 championship match. It was once again a very competitive contest as Armuchee won the first set 25-21, lost the second set 25-15, won the third set 25-21, lost the fourth set 25-23 and clinched the match and the tournament title with a 15-13 advantage in the fifth and final set.

“Both times we faced off with Rome it was a battle to the very end,” said Decker. “They are a very solid team, and are coached well.”

Leaders in stats during the successful tournament run for Armuchee were Carlee Poole with 87 assists, 15 kills, 43 digs and 15 aces, Emily Tomlin with 27 kills, 14 aces and 30 digs and Bailey Tomlin with 36 kills, seven blocks and five aces.

The Lady Indians were back on their home court on Monday to try to keep the momentum going when they host a tri-match against Oakwood Christian and Cass starting at 5 p.m. They will open Region 6-AA/A Public play on Tuesday when they travel to Callaway to take on the host Lady Cavaliers and Bremen in a tri-match starting at 5 p.m.

“Last year Bremen defeated us in the region championship so we are looking forward to this match on Tuesday night,” said Decker.

In a pitcher’s duel on Saturday, it was the Lady Eagles that were able to push across the one and deciding run in the bottom of the seventh inning for a walk-off win over non-region, county rival Armuchee.

The winning run came in the final inning as Emma Payne came home to score on a fly ball to the outfield by Macy Nichols.

Coosa’s Abby Jacobs and Armuchee’s Kelsie Burkett kept the opposing offenses’ bats quiet for most of the day with impressive outings in the circle. Jacobs earned the win for the Lady Eagles (8-4) thanks to her team’s late run as she went all seven innings for the shutout, allowing just three hits and striking out five.

Burkett took the tough-luck loss for Armuchee (4-12-1) as she gave up one unearned run on five hits while striking out three.

Payne finished with a hit and a run scored for Coosa, and Jacobs, Madison Ingram, Emily Lucas and Lexy Terry also had hits in the win.

Armuchee’s lineup was led by Kenzie Osborn with two hits, and Kelsey Wooten added a hit as well.

Coosa is back in action on Monday when the travel to Trion for another non-region test at 5:30 p.m. and then return home for a big Region 7-AA matchup against Dade County at 5 p.m.

Armuchee will look to get back on track on Monday when they host Gordon Central at 5 p.m. in a non-region affair and follow that up with a visit to Bowdon on Tuesday at 5:30 p.m. for a Region 6-A Public contest.

The Lady Indians battled to within a run on Friday in a non-region contest at Dade County but couldn’t complete the comeback to suffer a loss on the road.

Leading the offense for Armuchee was Izzy Espy and Delaney Steen with two hits apiece with Steen also scoring a run. Kelsey Wooten had a hit and an RBI, and Kelsie Burkett added a hit and a run scored as well. Ally Hawkins also had a hit.

Sara Harris took the loss in the circle, giving up five runs (one earned) on four hits while striking out one, and Burkett pitched 1 1-3 innings of scoreless relief as she didn’t allow a hit and struck out one.

The Lady Dragons took the trip to Carrollton on Friday and came away with a split in a pair of games in the Trojan Slam Tournament.

Pepperell (5-5) opened play against Carrollton and suffered an 8-3 defeat. Chloe Jones drove in all three runs in the contest for the Lady Dragons as she finished 1-for-3 with a homer, three RBIs and a run scored. Jolie Splendore added two hits, including a double, with a run scored, and Morgan Willingham also had two hits. Ansley Farmer contributed a hit and a run scored as well.

Jones also pitched all seven innings and gave up eight runs (five earned) on six hits while striking out two.

Pepperell bounced back in their second game of the evening with a 4-3 victory over Hillgrove in extra innings. Morgan Willingham came up with the deciding play as she drove a fly ball to the outfield in the eighth that brought home Farmer for the winning run on a sac fly.

Along with Willingham’s clutch hit, the Lady Dragons’ lineup was boosted by a two-hit, one-RBI effort from Jones, another solid game from leadoff hitter Splendore with a hit, an RBI and two runs scored and Farmer and Sam Jones with a hit and a run scored apiece.

Caroline Morgan picked up the win for Pepperell as she pitched seven innings and allowed three runs on nine hits while striking out three.

Pepperell was back at it on Monday as they visited Model at 5 p.m. for a Region 7-AA matchup. They are back home on Tuesday for another 7-AA showdown against Gordon Central at 5 p.m.