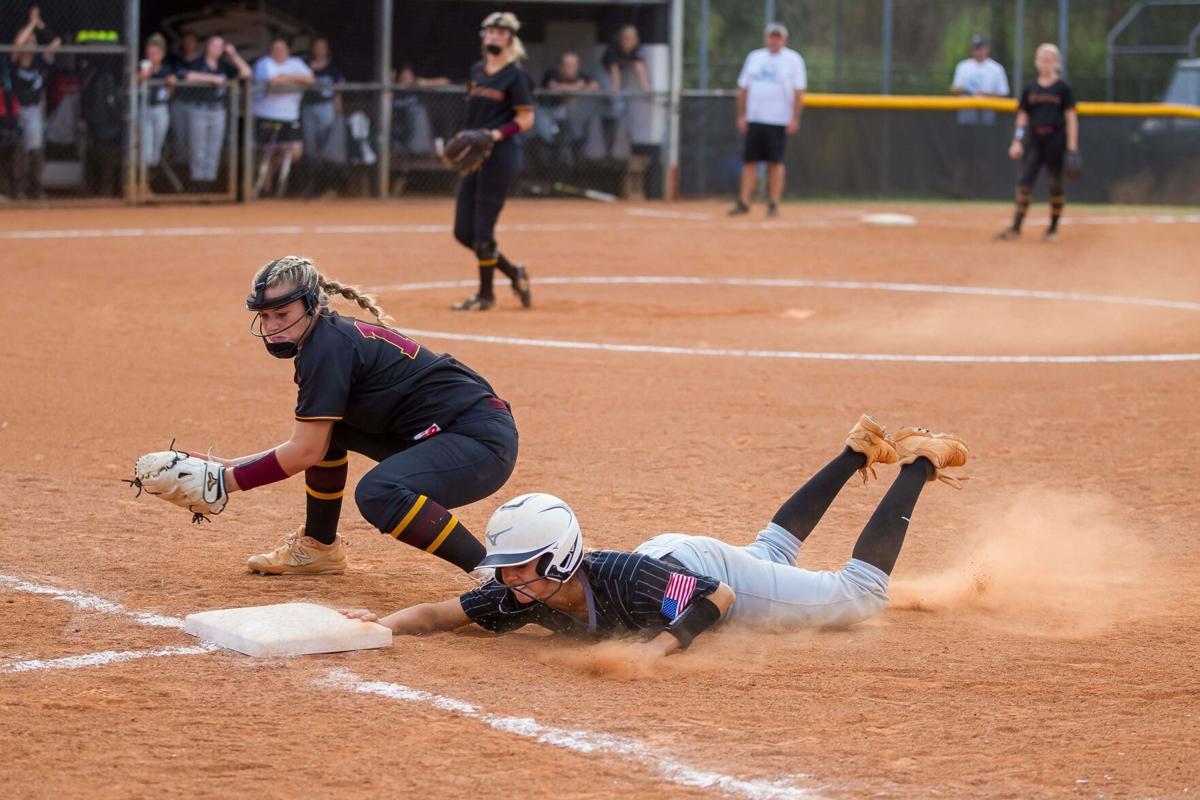 Coosa’s Shelby Nutter dives back into first base after a throw down from the catcher as Dade County’s Karlee Welch attempts the tag. 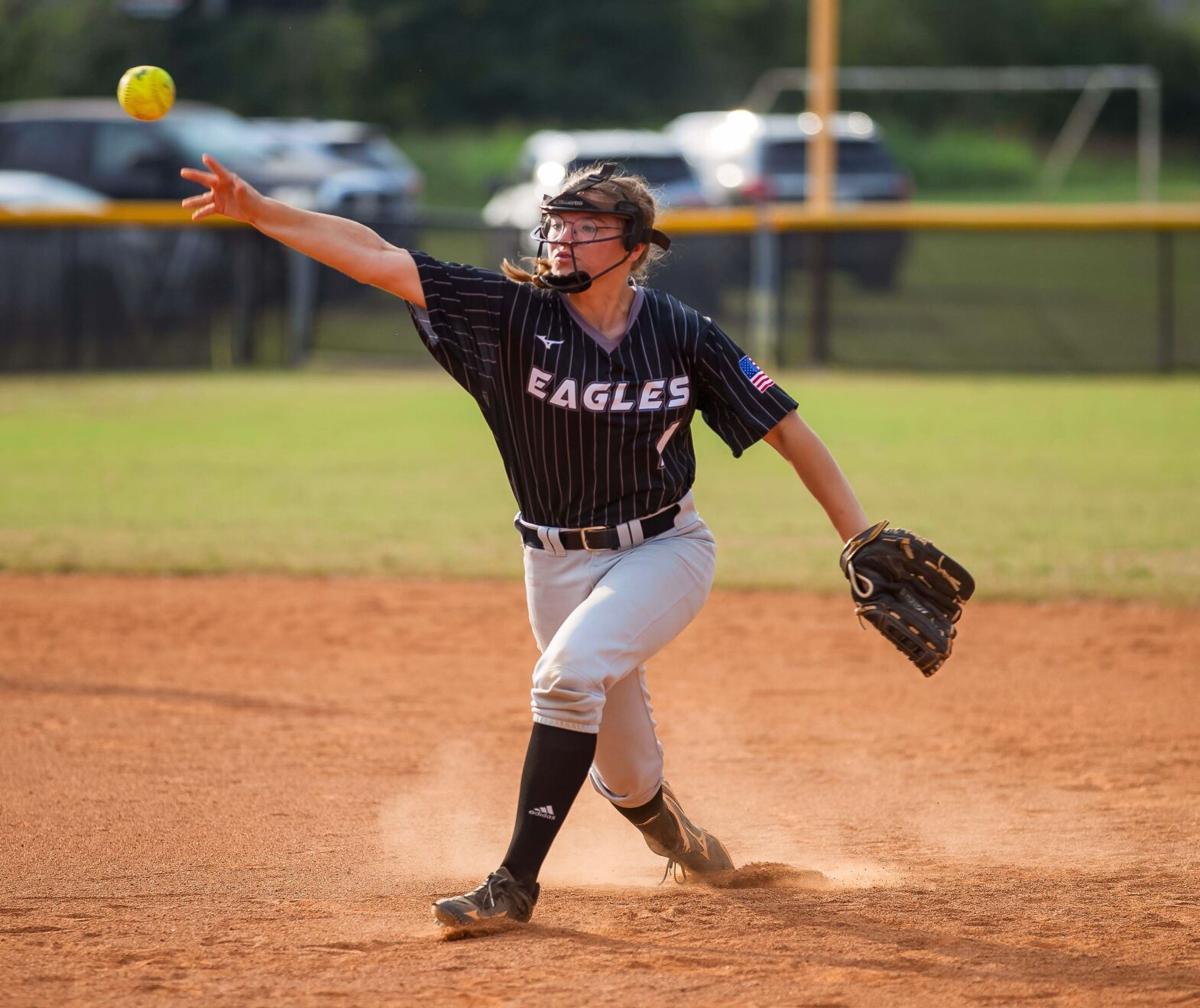 Coosa’s Emily Lucas makes a throw to first base during the third inning of Tuesday’s game vs. Dade County. 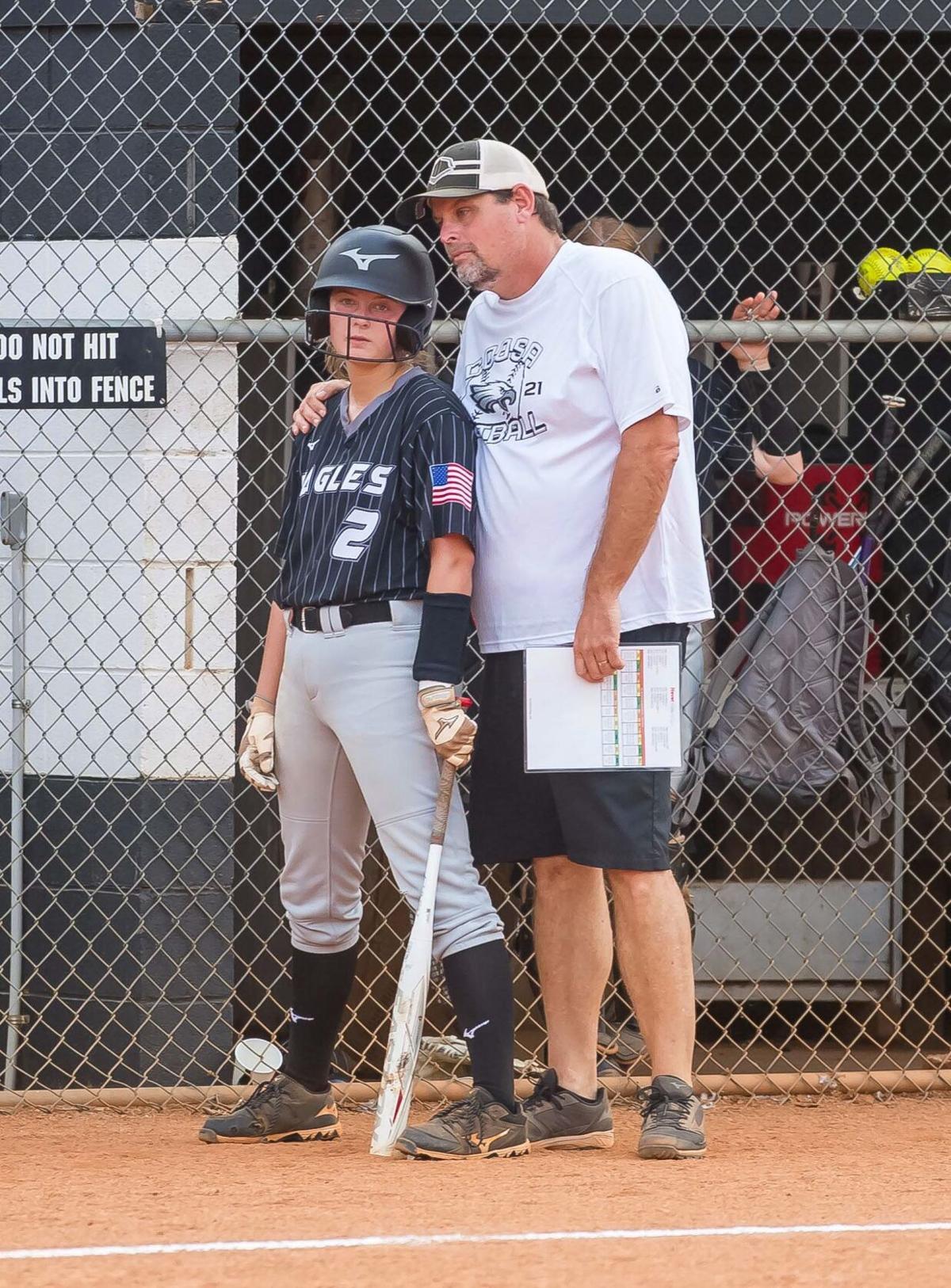 Coosa’s Shelby Nutter dives back into first base after a throw down from the catcher as Dade County’s Karlee Welch attempts the tag.

Coosa’s Emily Lucas makes a throw to first base during the third inning of Tuesday’s game vs. Dade County.

Coosa was looking to earn an improbable region win on their home field on Tuesday against 7-AA leader Dade County. Unfortunately, solid play offensively and defensively by the Lady Wolverines and some self-inflicted wounds by the Lady Eagles equaled out to a convincing victory for the visitors.

Dade County used a combination of timely hitting, shutdown pitching and a few Coosa defensive errors to build an early lead and cruise from there for an 8-0 win in five innings to keep the Lady Wolverines unbeaten in 7-AA play.

Coosa (8-5, 3-3 in Region 7-AA) fell behind early as the Lady Wolverines’ offense put together a three-run top of the first to immediately snatch the momentum from the home team. Dade County then turned to their impressive starting pitcher Kami Counts who held the Lady Eagles without a hit until fourth inning while her teammates provided her with even more run support thanks to another tally in the second, two more in the fourth and two more in the fifth to force the mercy rule.

“That’s a great team over there,” said Coosa head coach Chris Jacobs. “I don’t want to take anything away from them. They played very well today which is what we expected. You definitely can’t give them anything to help them even more. We had some errors and mental mistakes that you just can’t have against a team like that. We have to take care of ourselves and have a good mental approach, good defense and be able to hit the ball better. You’re not going to win many games with two hits, especially against a team like Dade County.”

Counts pitched five innings to earn the shortened complete-game win for Dade County (12-2, 6-0 in 7-AA). She allowed just two hits in the shutout and struck out five while walking one.

Offensively for the Lady Wolverines, the top two batters in the lineup, Stella Henry and Ali Thompson, led the charge with a combined 5-for-5 effort with four RBIs, three runs scored and four stolen bases. Henry had three hits, two RBIs, three stolen bases and two runs scored, and Thompson added two hits with two RBIs and a run scored.

Also contributing offensively for Dade County was Alyssa Wilson with a hit and an RBI, Kaitlyn Stinnett with a hit, two stolen bases and a run scored, Olivia Tierce with an RBI and Kristen Fowler, KK Castleberry, Raegan Page and Emma Heard all with a stolen base and a run scored.

The Lady Eagles’ lineup struggled to produce much of a threat against Counts as Shelby Nutter and Maddie Carter were the lone Coosa players to get a hit in the loss. MJ Nichols also reached base on a walk.

Despite the loss on Tuesday, Jacobs said he is still confident his team can achieve what they want to as the season moves toward the final stretch.

“If we take care of business our goal is still intact,” said Jacobs. “Our goal is to make the playoffs, and we can still do that. We’ve got to focus on one game at a time, play better defense and hit the ball a little bit. We’ve just got to go back to work and get better. We’ve still got some good teams ahead of us to play so we’ve got to go back to the team we were earlier in the year. We’re not where we want to be right now, but I still believe we can do what we set out to do at the start of the season, which is get one of those four playoff spots from our region.”

Coosa will look to bounce back on Thursday when they travel to Gordon Central for another Region 7-AA contest at 5 p.m.

The Lady Dragons continued their recent offensive surge on Tuesday with a dominant, run-rule shortened win in region play that included an 11-run third inning as well as a shortened perfect game effort by pitcher Chloe Jones.

Pepperell (7-5, 2-3 in Region 7-AA) started things off quickly at the plate with three runs in the bottom of the first but exploded in the third for an 11-run inning to force the mercy rule after they got Gordon Central out in the top of the fourth.

The Lady Dragons got contributions from up and down the lineup with Cloe Mitchell leading the way with two hits, including a double, to go with two RBIs and two runs scored. Morgan Willingham also had two hits with a double, an RBI and three runs scored, and Chloe Jones was the third Pepperell player with a multi-hit effort with two hits and an RBI.

Also pitching in was Riley Nelson, Chloe Stroud and Trista Ely with a hit and two RBIs apiece with Nelson and Stroud each having a double. Caroline Morgan drove in two runs, and Jolie Splendore had a triple and two runs scored.

Jones completely shut down the Gordon Central offense for a four-inning perfect game to earn the win in the circle. She went the distance and didn’t allow a run or a hit while striking out eight.

Pepperell is on the road on Thursday for their next contest as they travel to Murray County for a non-region affair at 5 p.m.

The Lady Devils got a stellar outing from starting pitcher Madison Reaves and a steady offensive day from their lineup to earn a 7-AA home win on Tuesday.

Reaves pitched a complete game to earn the win for Model (2-6, 1-4 in Region 7-AA), going seven innings and allowing two unearned runs on three hits while striking out 14.

Offensively for the Lady Devils, Courtney McCord had a double and two RBIs, and Julia Shinholster had two hits, including a double, with a run scored to lead the effort. Caitlyn O’Guinn added two hits with an RBI, Katie Johnston had a double among two hits, Sadie Raughton added a hit and two runs scored, Claire Chamberlain had a hit and a run scored and Shaylin Momon also drove in a run.

Model will try to keep the momentum going in region play on Thursday when they host Chattooga at 5 p.m.