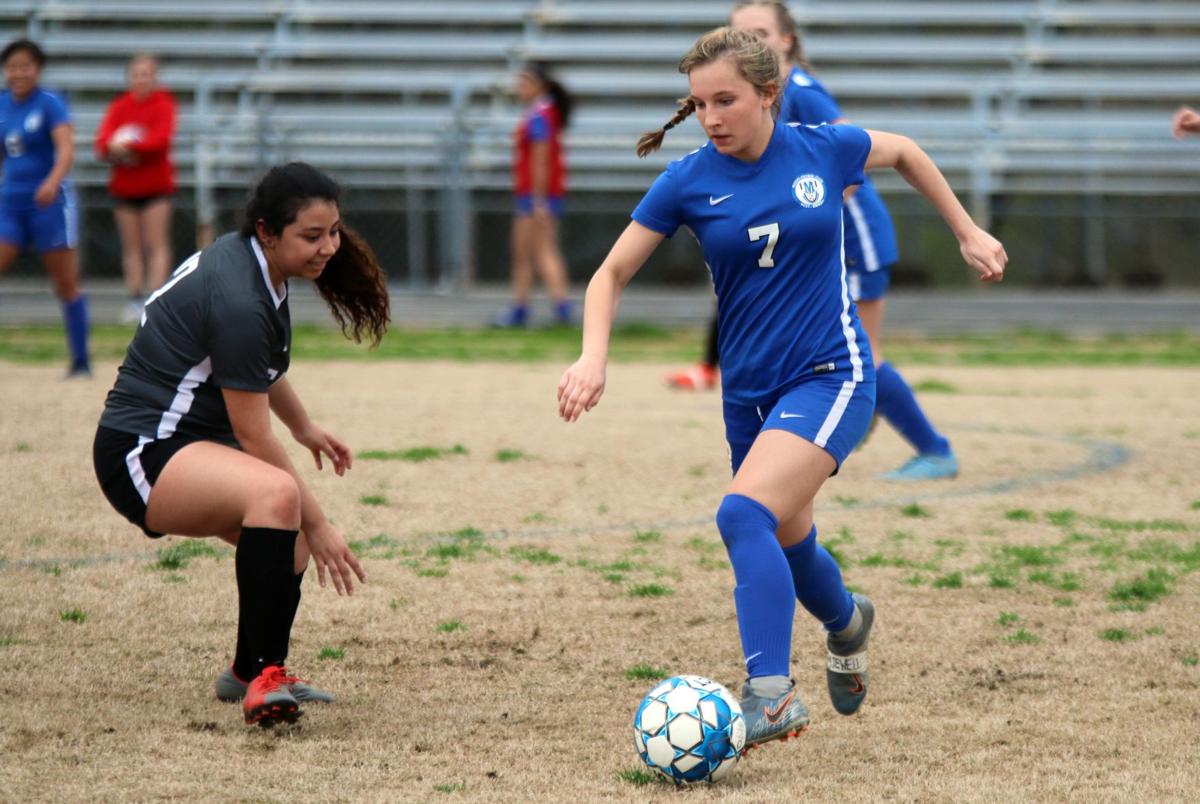 Model’s Lauren Akemon (right) moves the ball around Coosa’s Itzhel Reyes Cruz during the first half of Thursday’s Region 7-AA match in Shannon. Akemon scored five goals as the Lady Blue Devils romped to an 8-1 win. 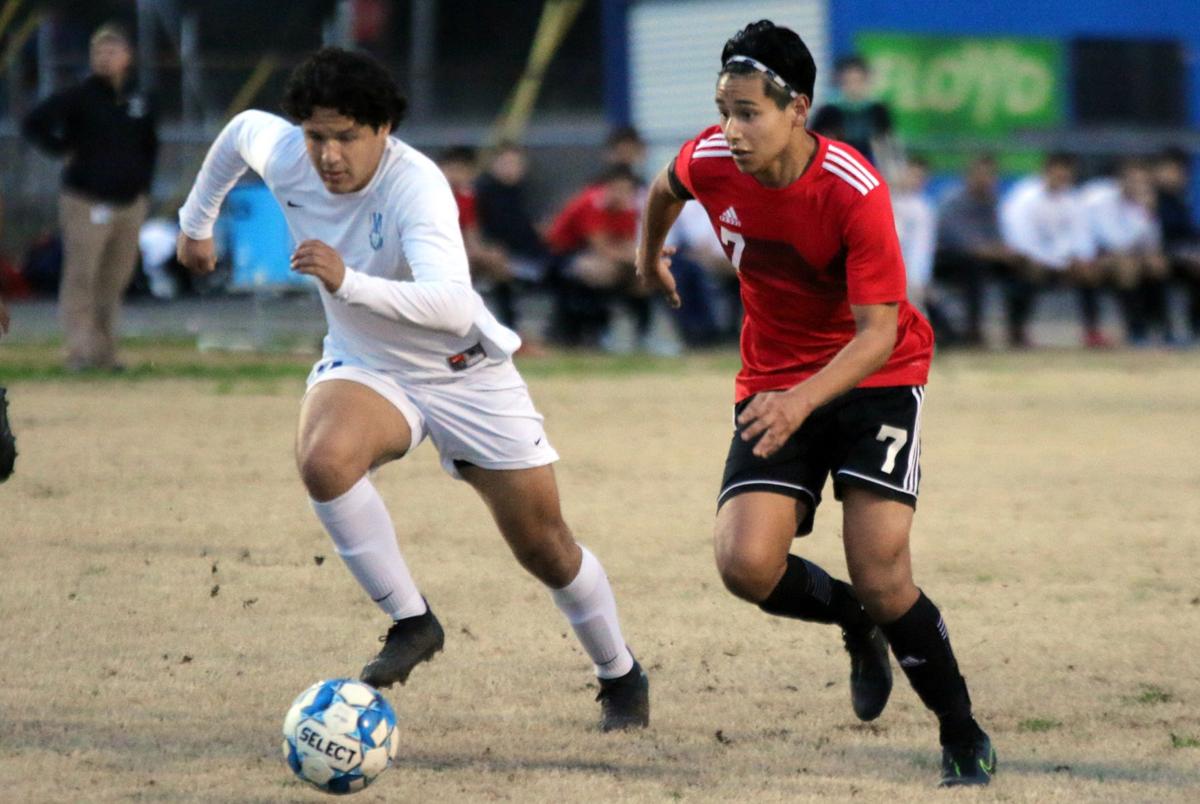 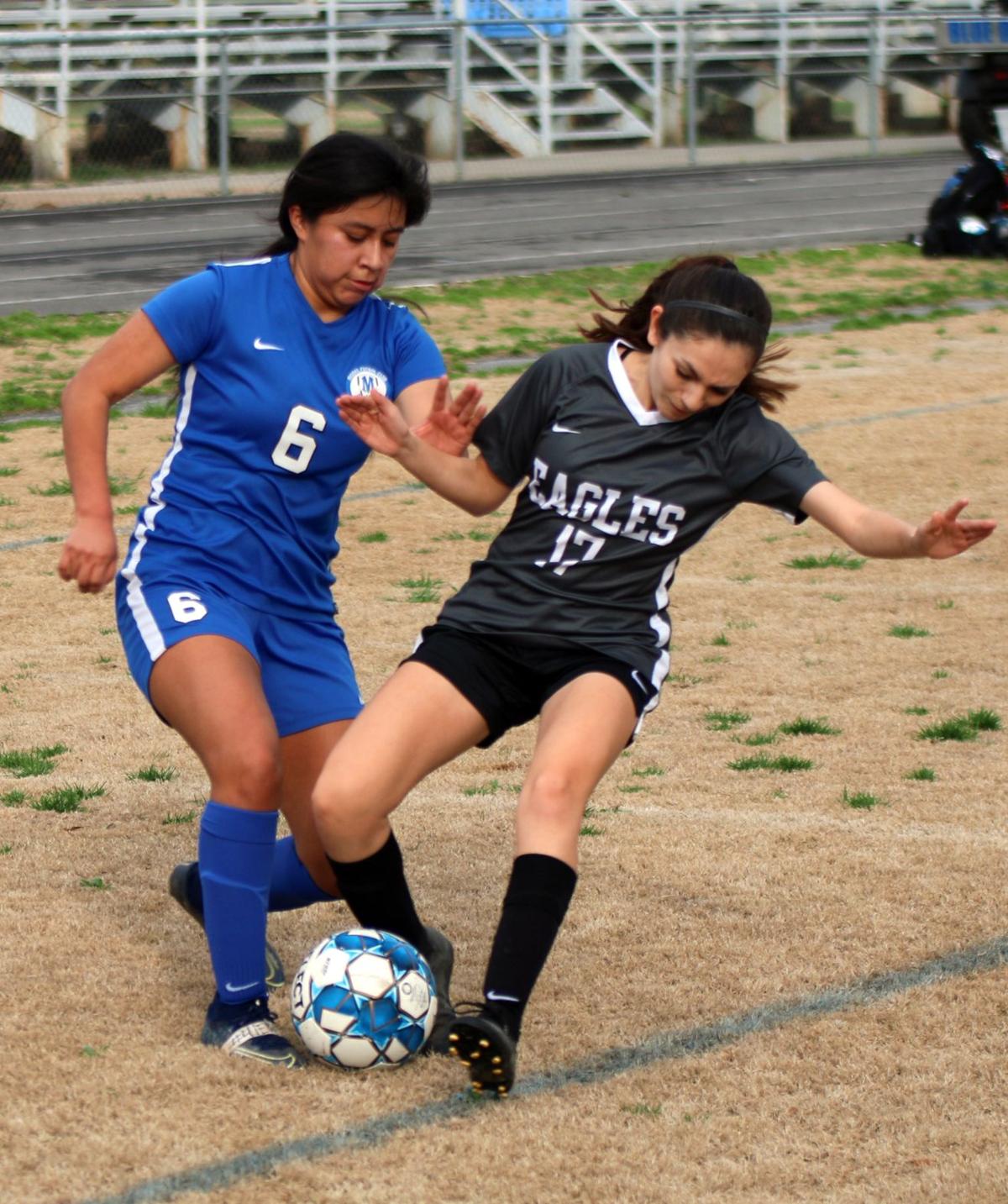 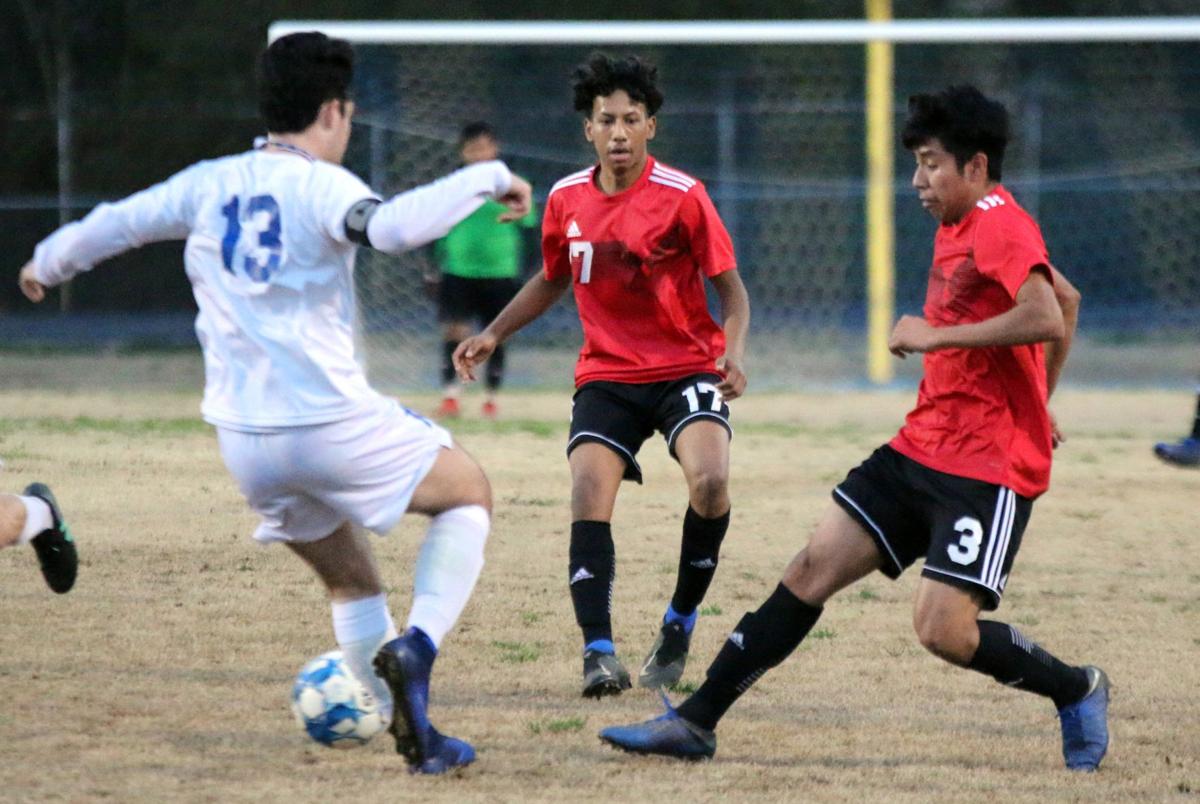 Coosa's Bayron Mendez (3) moves toward the ball in front of Model's Landon Hays (13) during Thursday's match. 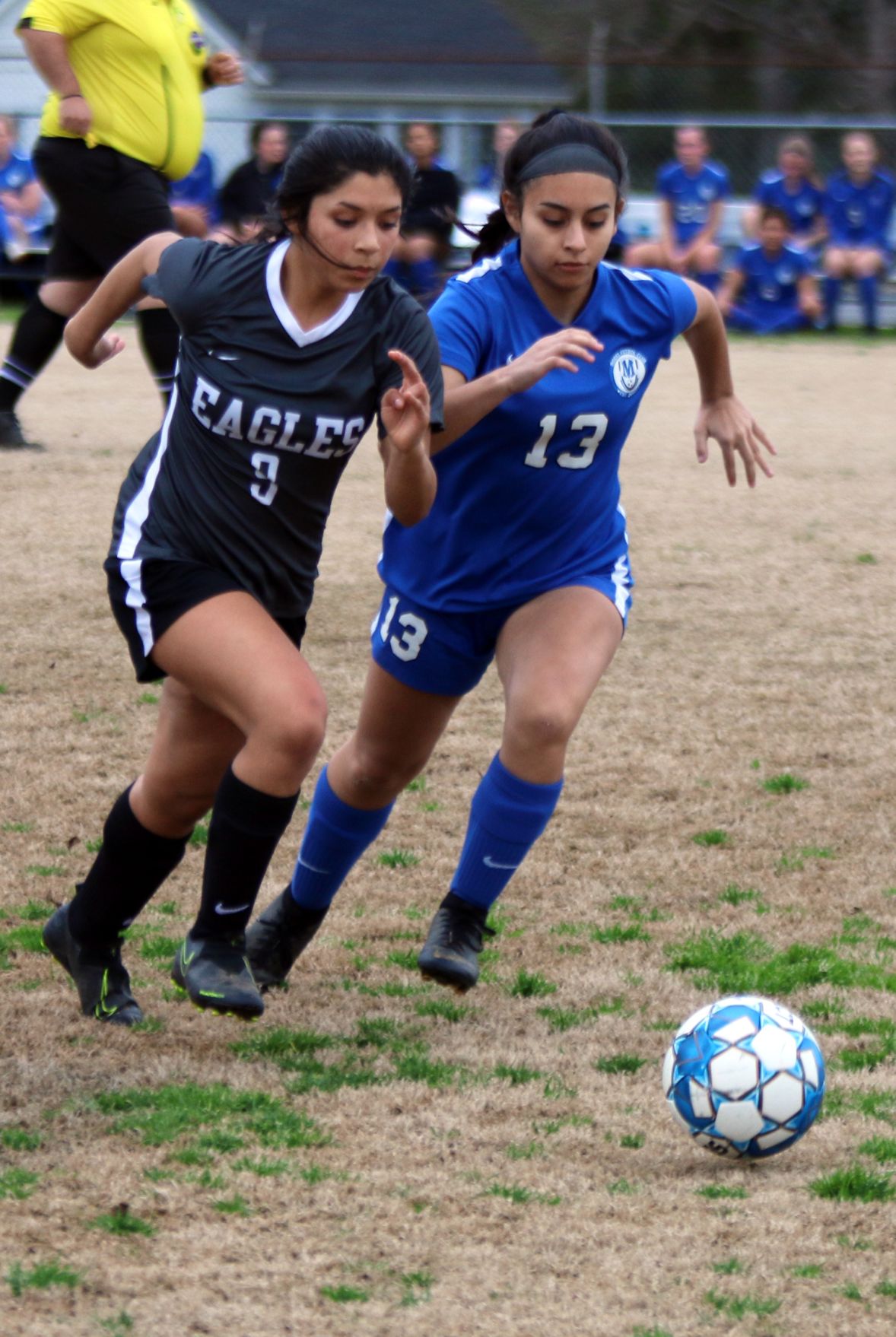 Model’s Lauren Akemon (right) moves the ball around Coosa’s Itzhel Reyes Cruz during the first half of Thursday’s Region 7-AA match in Shannon. Akemon scored five goals as the Lady Blue Devils romped to an 8-1 win.

Coosa's Bayron Mendez (3) moves toward the ball in front of Model's Landon Hays (13) during Thursday's match.

Some teamwork and another big night from Lauren Akemon propelled the Model girls’ soccer team past Coosa to kick off Tuesday evening’s contests.

The Model boys made sure they capped the night with a win of their own.

Akemon scored five goals, including a hat trick in the first half alone, as the Lady Blue Devils defeated Coosa 8-1 at Woodard-Tuggle Stadium. The Blue Devils, meanwhile, got on the board early and went on to defeat the Eagles 3-1.

Both Region 7-AA matches provided key victories for the Model teams, who have battled with Coosa in recent years for the region crown.

“We came out with a good attitude, moved to ball well, defense came large. We got lucky up top a few times that kind of broke open the game,” first-year Model girls’ coach Ian Crawley said. “All the kids played, all the kids contributed. I don’t know what else I can say.”

The Lady Devils’ junior striker wasted little time putting her team on the board as she set up and took a arcing shot in the fourth minute that went over the head of Coosa keeper Emily Lucas and into the net.

Coosa was quick to respond, however, as Ashley Medrano scored in the ninth minute as she beat out a Model player on the outside and made a cross into the goal to tie the game at 1-1.

While the Lady Eagles would challenge Model’s back line off and on throughout the remainder of the match they would not find the back of the goal again as Akemon scored twice more in the next 11 minutes to put the Lady Devils back ahead for good.

Model (5-1, 5-0 7-AA) also got goals from Jayde Brewer, Ashley Vicente-Perez and Anna Ruth Parker. Abigail Henderson finished with a pair of assists, while Vicente-Perez, Perry Durden, Deyvis Reader and Payton Brown had one each.

Keeper Emily Couch had three saves in goal, relying mostly on the Lady Devil defense, including Lizzie Ely, to keep Coosa away from Model’s goal.

Crawley said the mix of younger and older players they have has provided some obstacles in coming together as a team but they seem to be putting those issues aside.

“We’ve got a lot of new players. We’ve got a lot of kids that came up from the ninth grade. We have a lot of veteran players too. But we’re trying to figure out how to work as a team. So we’ve had kids play positions that they’re uncomfortable with from time to time, but it’s starting to gel. And it looks like we might be kind of finding the recipe for success. So we’ll see if we can keep the train continuing,” Crawley said.

Coosa (0-3, 0-3) cooled off after Medrano’s early goal, but coach Luke Myers said he was proud of how they started the game and he knows his players are still rough around the edges after the many postponements and cancellations they’ve had in the first month of the season because of rain.

“We’re into mid March and we’ve only played three games, which is rare,” Myers said. “I have three freshmen girls starting. I would love for them to have so many more games under their belt, but we play with what we’ve got. We can’t control the weather. And so that’s just kind of one of those things about spring sports. But we’ve been doing the best we can.”

One of Coosa’s top defenders, Stephanie Casteneda, was injured late in the first half and was forced to sit out the rest of the match with an injury. Freshman keeper Emily Lucas had 11 saves — 10 of which came in the second half — in just her third varsity game.

“She came out and kept a lot of goals out of the net. She got out on some balls that maybe could have been dangerous, talked to the defenders and did things that you would see out of a senior experienced keeper,” Myers said.

In the boys’ game, Model’s David Veillon found himself with the ball ahead of the Coosa defense to score the first of three goals to kick off the Blue Devils’ win.

Model’s teams will be at Dade County on Thursday, while Coosa’s teams travel to Chattooga.