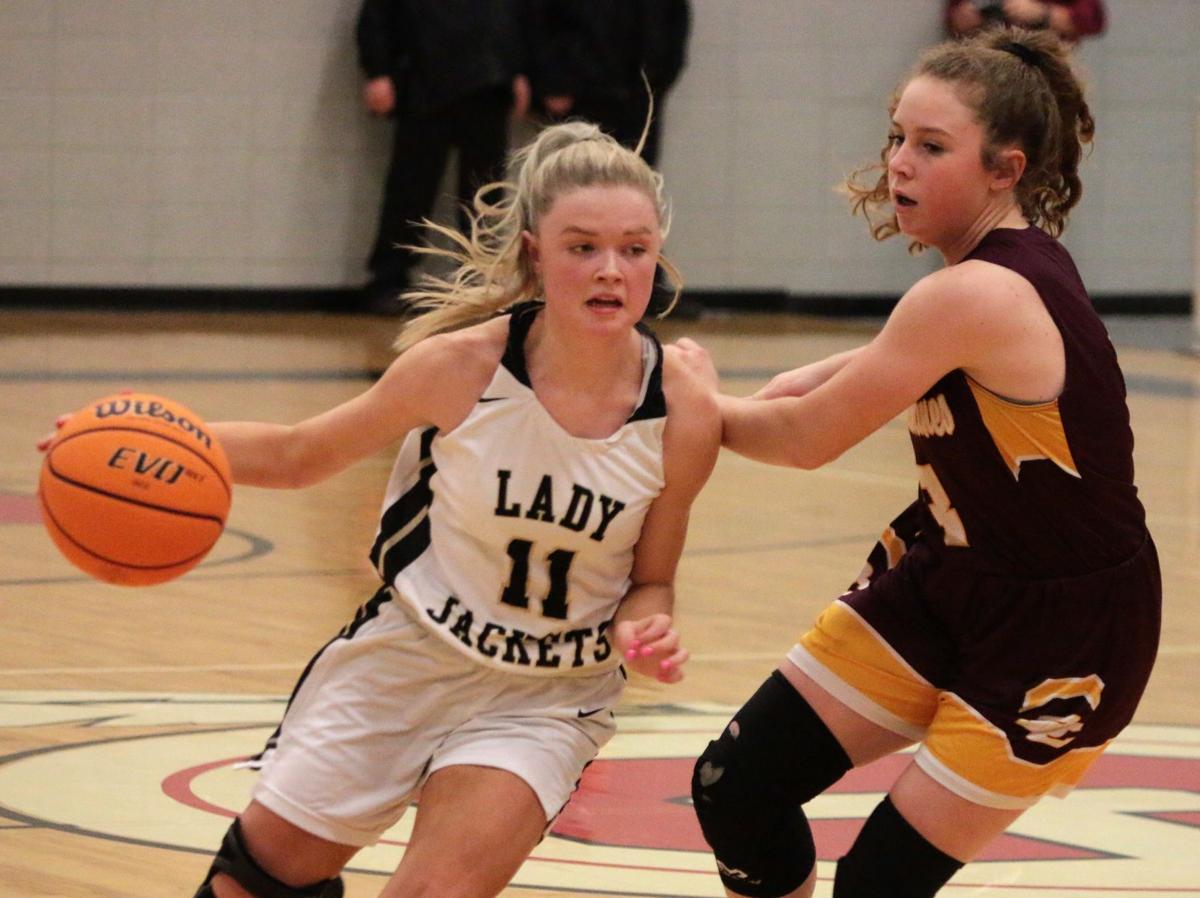 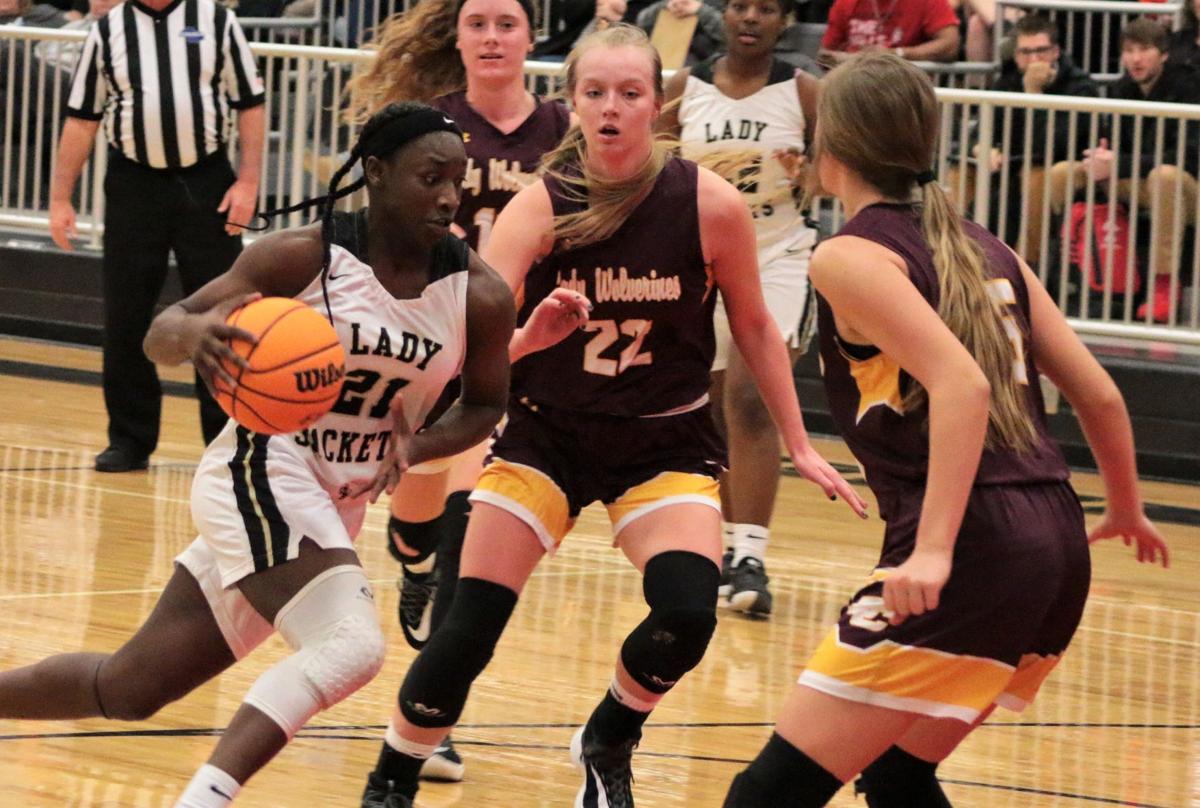 Rockmart’s Keyarah Berry (21) drives to the inside against Dade County during Friday’s girls’ semifinal game at Chattooga.

Rockmart’s Keyarah Berry (21) drives to the inside against Dade County during Friday’s girls’ semifinal game at Chattooga.

SUMMERVILLE — There was no time to rest for either of the top-seeded Region 7-AA girls’ teams Friday playing in the semifinals of the region tournament.

Both No. 1 seed Chattooga and No. 2 seed Rockmart were pushed to the brink in their opening games of the tournament at Chattooga High School, with Chattooga defeating Gordon Central 58-55 and Rockmart pulling out a 47-44 win over Dade County.

The Lady Indians and Lady Jackets will meet Saturday at 7 p.m. in the region championship game. Gordon Central and Dade County will play in the third-place game at 4 p.m.

Rockmart (19-6) and Dade County (18-9) were tied at 44 each when the Lady Jackets’ leading scorer, Keyarah Berry, went to the line and hit 3-of-6 free throws down the stretch.

Dade County’s Emma Heard got the ball near the corner with less than 3 seconds left and shot a 3-pointer that hit inside of the rim and rolled around before going out as the final buzzer sounded.

Rockmart coach Andre Clark said he had warned his team about the pressure that Dade County would put on them.

“I told them coming in that if we didn’t come in ready that they were going to push us to the limit, and they did exactly what I thought they were going to do because they are a team that plays hard,” Clark said. “They don’t quit. They ain’t a bad basketball team.”

Berry finished with a game-high 33 points, 14 of which came in a critical third quarter that helped Rockmart reestablish its defense and turn it into points on the scoreboard.

“It was everything,” Clark said. “And that’s what I told them before the game that defense is going to be our offense, and if we just play solid defense we’ll have a chance to win the game.”

Rockmart trailed Dade County 28-22 at halftime, with Berry responsible for 15 of the Lady Jackets’ first half points.

Berry was able to take advantage of some Dade turnovers early in the third quarter and helped Rockmart go on a 7-3 run and get within two, 31-29. The junior then had a personal 8-0 run over the last 2:40 of the period as the Lady Jackets went ahead 37-34.

Dade County’s Jayda Wood sank a long 3-pointer with a second to go and tied it at 37 apiece leaving the game to be decided in the final period.

The game was the first in a week for Rockmart after getting the No. 2 seed and then having to wait an extra day after weather forced the postponement of the semifinals from Thursday to Friday.

“We had that whole week off pretty much and I was concerned about that, not because you can practice all you want, but there’s nothing like running up and down the court,” Clark said. “I thought that we just didn’t have the energy like we normally do to finish games and even kind of start the game the way I like it, so it was tough game and I’m just glad we pulled it out.”

Chattooga and Gordon Central battled from start to finish of their semifinals matchup, with a third quarter resurgence by the Lady Indians providing the boost needed for a 58-55 victory.

Gordon Central (17-8) outscored Chattooga (20-5) in the second quarter of Friday’s first game and went into halftime holding a close 27-25 lead.

The host Lady Indians recovered in the third period, using a balanced attack to build a 42-39 lead and hold on through the final buzzer as both teams scored 16 points in the fourth.

“I think we play our most successful games when we’re balanced (on offense). But our catalyst is our rebounding,” Chattooga coach Alvah Beasley said. “If we stop the other team from offensive rebounding that can allow us to get out in transition, but also our bigs tonight rebounded the ball really well.”

Makiya Parrish and Naveah Morgan both finished with nine points for the Lady Indians.

Mercedes Coleman had 23 points to pace Gordon Central, including 11 in the fourth quarter, while Brook Wilson added 13. Coleman, the 7-AA girls co-player of the year, had four 3-pointers and Wilson had three.

“I think that Gordon Central did a really good job of highlighting their other players, outside of number 23 (Coleman),” Beasley said. “I think they had very balanced scoring tonight. And that kind of threw us off.”