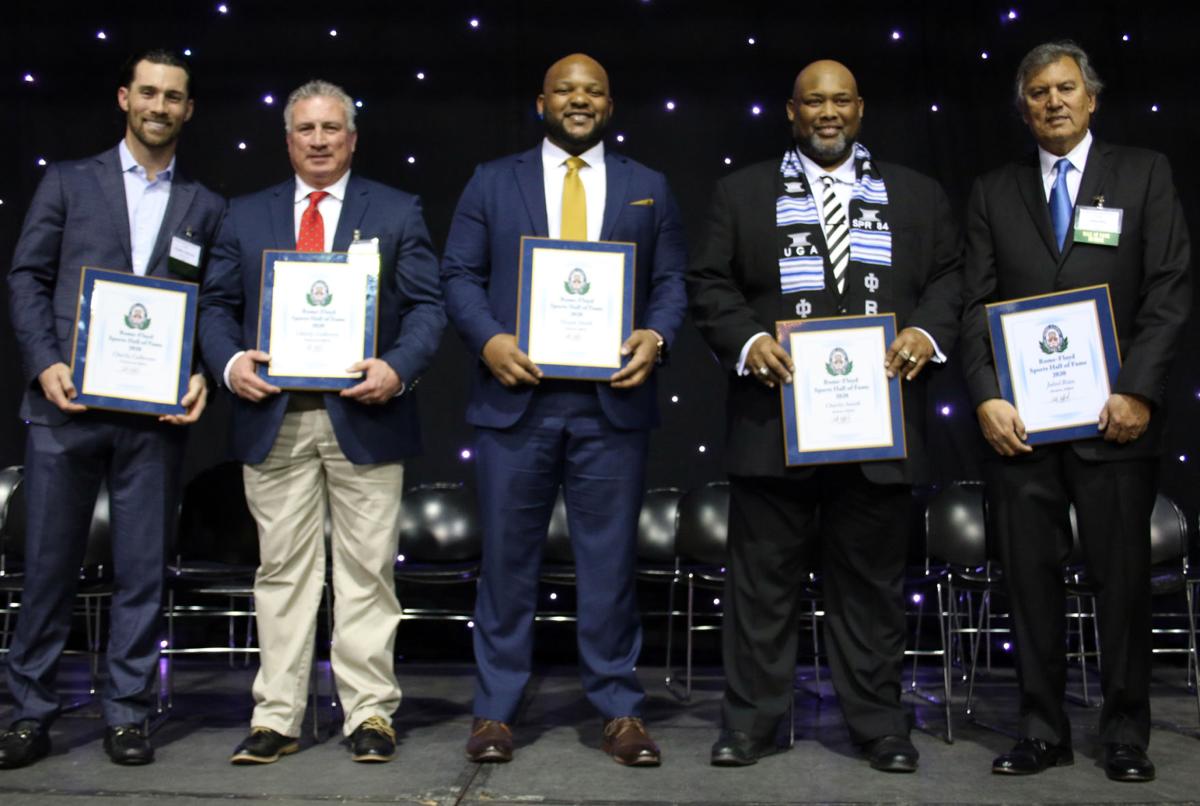 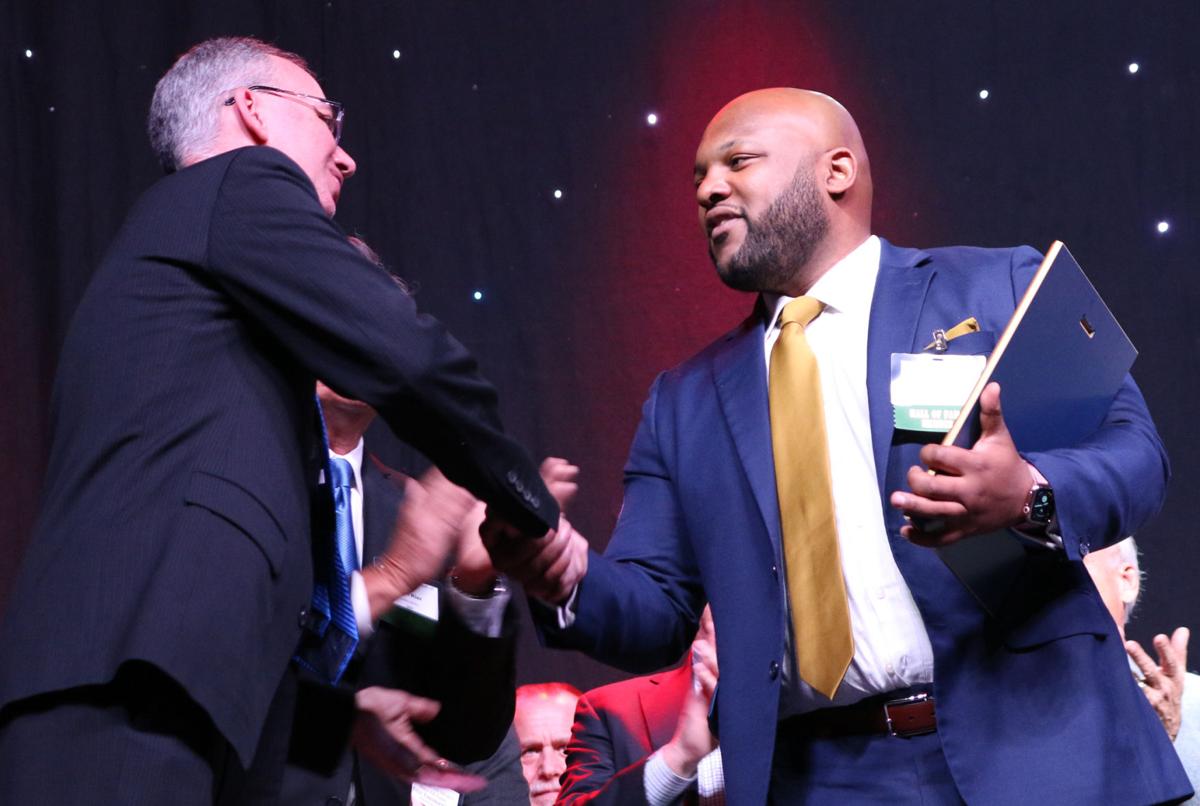 Toryan Smith (right) is congratulated by Rome-Floyd Parks and Recreation's Jim Alred after being inducted into the Rome-Floyd Sports Hall of Fame on Monday at the Forum River Center. 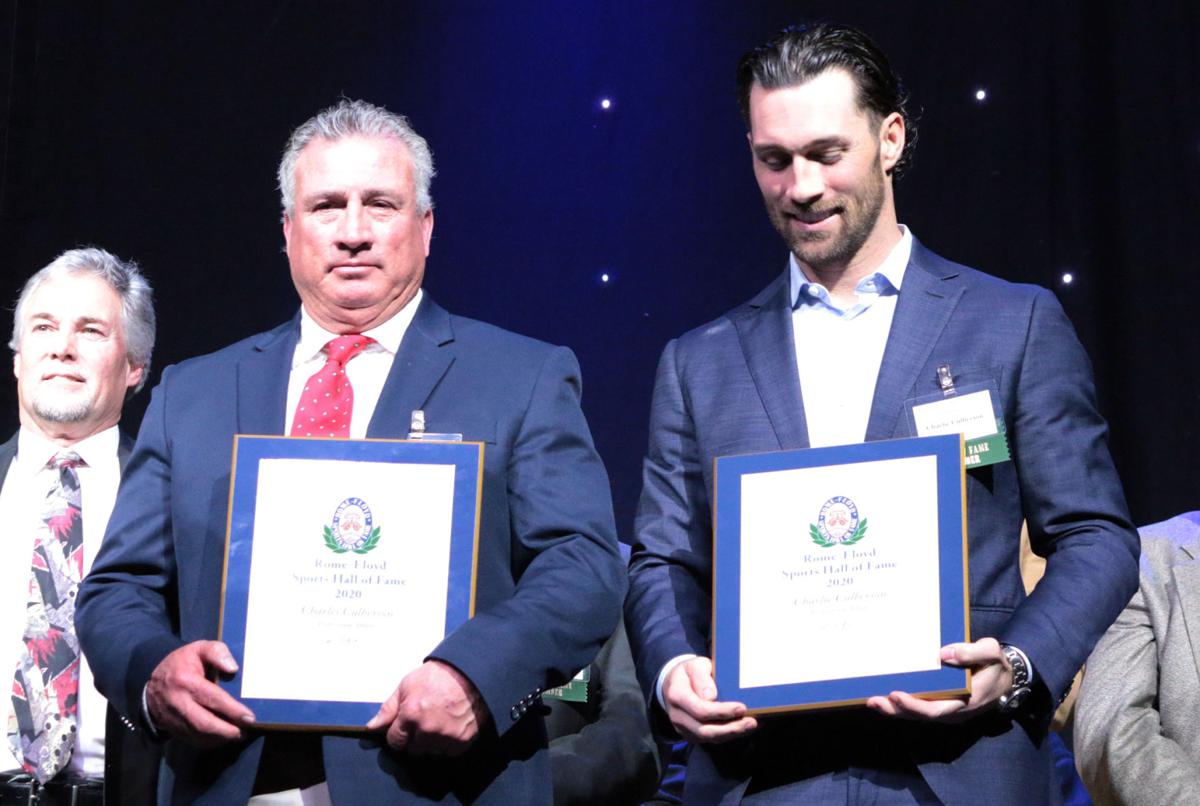 Charles Culberson (left) and his son, Charlie Culberson, stand on stage at the Forum River Center after being inducted in the Rome-Floyd Sports Hall of Fame. The pair were one of two father-son duos to be honored Monday night along with Charles Smith and Toryan Smith.

Toryan Smith (right) is congratulated by Rome-Floyd Parks and Recreation's Jim Alred after being inducted into the Rome-Floyd Sports Hall of Fame on Monday at the Forum River Center.

Charles Culberson (left) and his son, Charlie Culberson, stand on stage at the Forum River Center after being inducted in the Rome-Floyd Sports Hall of Fame. The pair were one of two father-son duos to be honored Monday night along with Charles Smith and Toryan Smith.

Five local sports legends and 14 local high school seniors along with more than 35 members of the Rome-Floyd Sports Hall of Fame were honored on Monday night at the Forum River Center for the 2020 hall of fame induction ceremony and banquet.

Jaleel Riaz, Toryan Smith, Charles Smith, Charles Culberson and Charlie Culberson became the newest additions to the hall of fame, giving the night a big touch of family as for the first time in hall history father-son combinations were enshrined on the same night.

“It means more to me that I get to go into the hall with my dad,” Charlie Culberson said before the event. “I think it’s been a long time coming for him, because he’s done so much for the community. I followed in his footsteps. I’m just a tag along with him.”

Both Culberson’s entered the hall in the Professional Athlete category. Charles played several years of minor league baseball after being an All-America selection at Jacksonville State University. The Coosa High School graduate even led the Florida State League in batting one season. Since retiring from baseball, he has been teaching hitting and baseball to hundreds of youth throughout the area.

Not to mention, he helped raise a son who turned out to be a good baseball player himself.

“I did what any father would do for their kid. This is amazing to get to see Charlie have a chance to live his dream,” Charles Culberson said. “I think every dad out there wants that for his children, and we were lucky that it all worked out for us.”

Charlie Culberson also entered the hall in the professional athlete category. Charlie grew up in Rome and starred at Calhoun High School before being drafted by the San Francisco Giants. He’s played for four major league teams and will be leaving for spring training with the Atlanta Braves in just a few days.

“I have a ton of great memories from Rome. Playing ball behind the levee, playing little league baseball and travelling with some of my friends from around Rome,” he said. “Everything comes back to Rome for me, and Rome has done so much for me.”

Charlie Culberson is also well known for his volunteer work and charity work and is a fan favorite for the Atlanta Braves. True to fashion, he stayed around long after the ceremony was over taking pictures and signing autographs for fans.

While the Culberson’s shone on the baseball diamond, the Smith’s gravitated to the gridiron during their high school and collegiate days and beyond.

“It’s an outstanding honor to go in with this class. Just flipping through the program to see the legends that are in the hall and my name being mentioned among them is an honor,” Toryan Smith said. “Like my dad said, it’s the cherry on top. It’s great going into the hall, but it’s even better going in with my dad. We were able to get all of our friends and family together and get the community together. It’s a village-type award, and it’s been special to be here today.”

“Going into the hall of fame is special, because it’s almost like it’s a new hall of fame. Everyone did a tremendous job having it at the Forum. Then being with all of these great athletes and having someone like Charlie (Culberson) here too is awesome,” Charles Smith said. “Going in with my son is what made it. It’s special to be able to have this legacy with him.”

Riaz, renowned throughout Rome and Northwest Georgia as a tennis player, coach and instructor, entered the hall as an amateur athlete. The All-America tennis player at both Wingate and Shorter Colleges also coached, taught as a pro and even coached and played on the Pakistani Davis Cup Teams.

He’s also given lessons to hundreds of Romans for more than 40 years.

“It’s a great honor to be inducted into the Hall of Fame. It gives me so much pleasure to meet the great inductees and now to be one of them is amazing,” Riaz said. “I love what I do, and I’d like to thank everyone who nominated me.”

Hall of fame member Randy Davis again served as the event’s master of ceremonies and made note of the special family connection of four of the inductees.

“We’ve had family members go into the hall before, but we’ve never had fathers and sons inducted into the hall of fame at the same time,” Davis said. “I think it’s a great thing and these candidates are great additions to the hall.”

The night also served to honor 14 high school seniors from local schools with John Pinson Jr. Scholarships. One male and female student-athlete was selected by each local school to receive the $500 scholarship. Bill Pinson announced all 14 winners.

More than 450 people attended the banquet making it one of the largest in the hall of fame’s history. After the students received their awards, all hall of fame members in the audience were brought on stage to sit and celebrate the five newest inductees.

“I was just overwhelmed with the atmosphere, the facility and the organization putting this thing together. It was almost impeccable. It was head and shoulders over anything we’ve had before,” Hall of fame and committee member Larry Bing said. “I know all of the other former hall of fame members were so tickled with the opportunity to come back. I hope we have even more come back in the future when word spreads about how great this event was.”

Nominations for the Rome-Floyd Sports Hall of Fame are accepted on a rolling basis with guidelines available online at www.rfpra.com. The Hall of Fame Committee is responsible for selecting the inductees each year.

The 2021 Hall of Fame class will be announced at a press conference in early October.