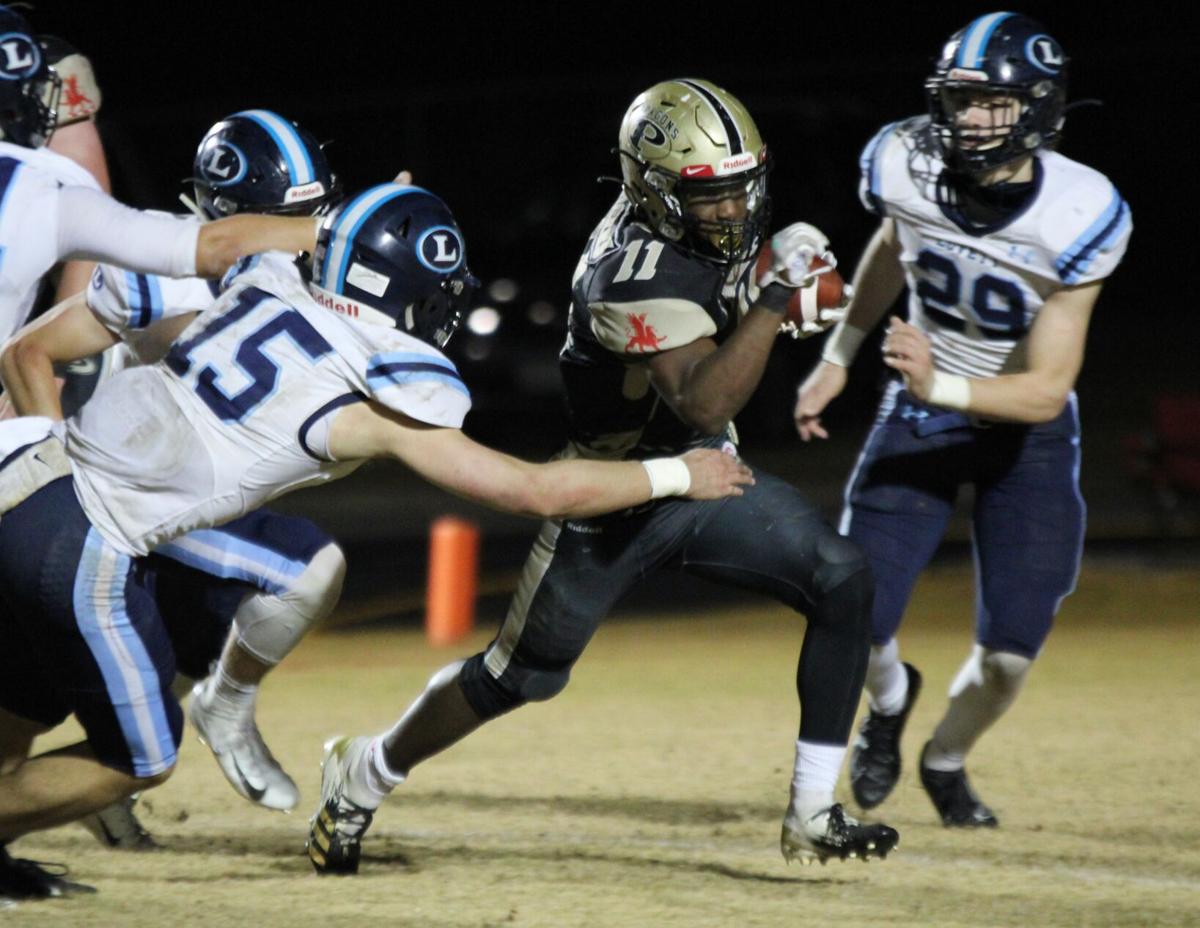 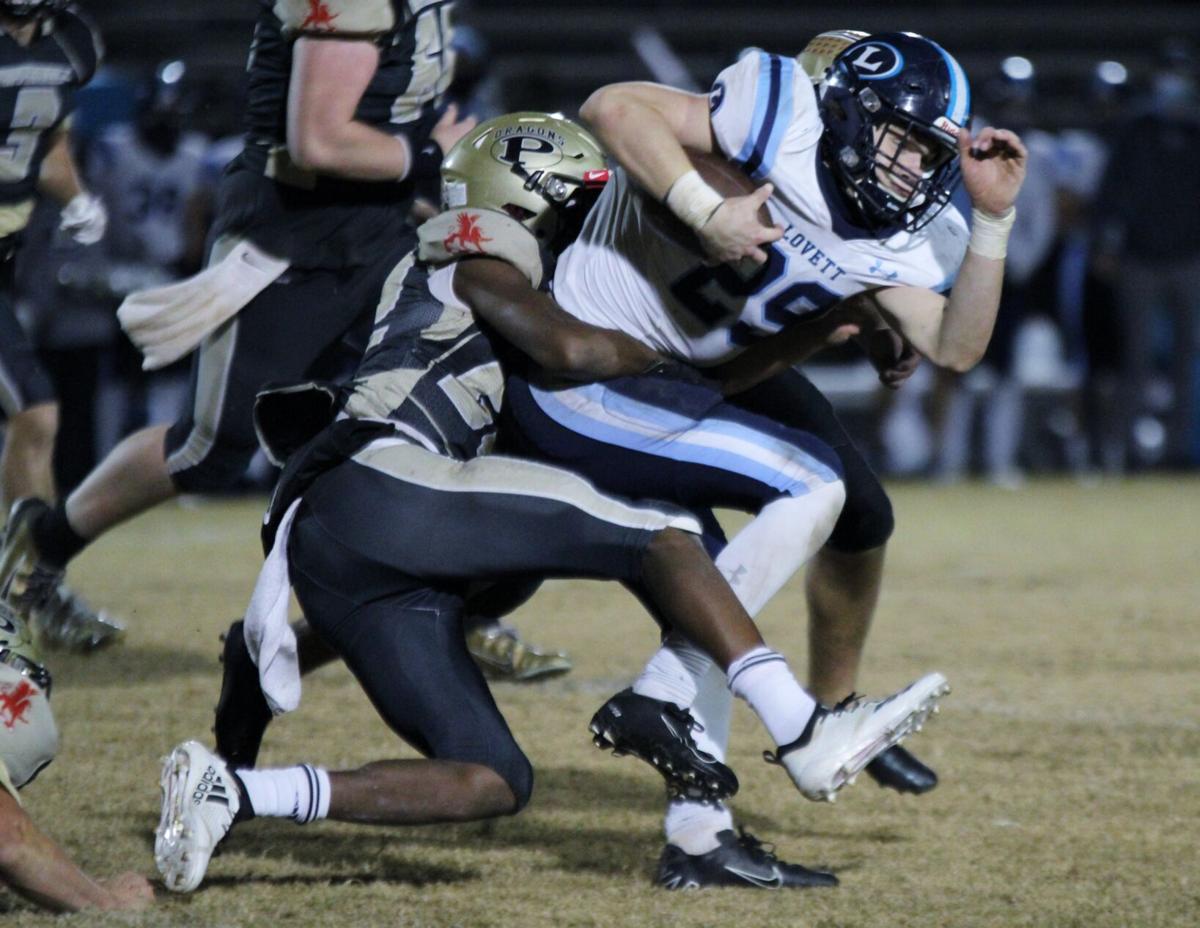 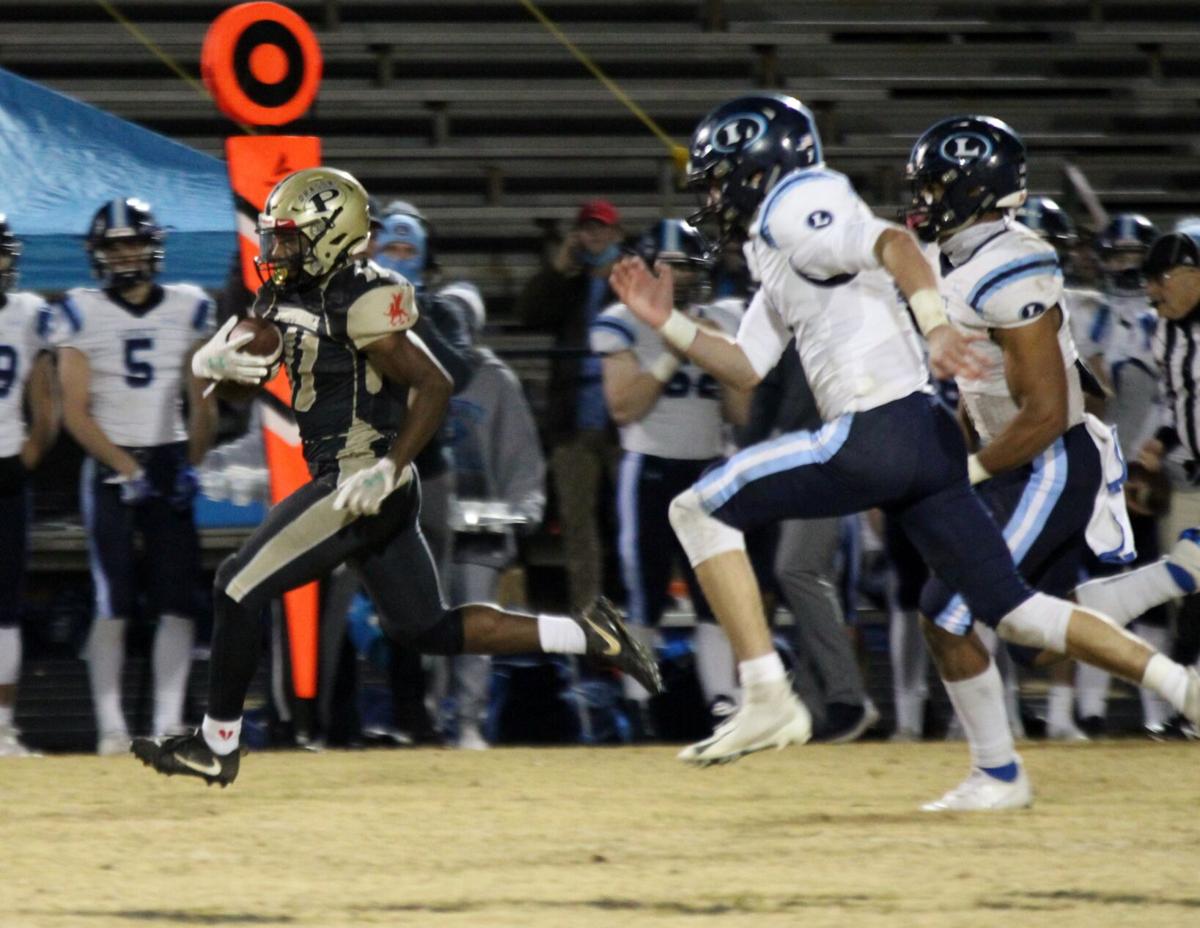 Pepperell's D.J. Lovett (left) leads Lovett's defenders on a 67-yard touchdown run down the field during Saturday's game at Dragon Stadium in Lindale.

Pepperell's D.J. Lovett (left) leads Lovett's defenders on a 67-yard touchdown run down the field during Saturday's game at Dragon Stadium in Lindale.

With the extension of a season filled with adversity and, in turn, resiliency riding on the outcome of Saturday’s game at Dragon Stadium, the Pepperell football team challenged the visiting Lovett Lions as much as it could.

But a pair of failed fourth-and-short conversions and a Lovett interception in the second half provided no favors for the host Dragons in the first round of the Class AA state playoffs as they fell 38-17.

The loss ends Pepperell’s season after they finished second in Region 7-AA and battled back through injuries, COVID-19 protocol and tough defeats.

“Six months ago we didn’t know we’d ever be here,” Dragons head coach Rick Hurst said. “I’ve seen what our kids have been through. And, you know, every day in the summer was not knowing when we were going to start, pushing this back, pushing that back, and they never flinched. They were disappointed a few times, but they never flinched.”

“I want to commend our staff for making them feel like we were going to get here. I know they’ve done what they’re supposed to. They sacrificed a lot to get to this point.”

Pepperell (5-5) went into halftime down 21-3 and got a momentum boost early in the third quarter.

Jon Sheilds recovered a Lovett fumble in Dragons territory and D.J. Rogers raced 67 yards down the field two plays later for Pepperell’s first touchdown of the night. Will Helton attached his first of two extra points to make it 21-10.

Lovett (7-2) was forced to punt on the ensuing possession, and Pepperell went for it on fourth-and-2, only to have Rogers stopped a yard short going up the middle.

Taking over on the Dragons’ 37-yard line, the No. 4-ranked Lions edged their way toward the end zone, converting on fourth-and-8 with a 17-yard pass from Preston Lusink to Stevie Bracey to get down to the 6.

Pepperell kept Lovett out of the end zone for three plays until Lusink skirted to the outside and got in from the 1-yard line early in the fourth quarter.

Facing third-and-13 on the next drive, Pepperell got a 12-yard pass from Matthew Waddell to Chase Gresham. A heated short Waddell pass on the next play bounced off Helton’s chest, turning possession over to Lovett on downs for the second Dragon drive in a row.

Waddell was intercepted by Lovett’s Charlie Hoke two plays into the ensuing drive, leading to the Lions kicking a short field goal with 4:20 on the clock.

“It seemed like we were right there a few times defensively. We just couldn’t make a play. And it seems like it’s been that way all year,” Hurst said. “I think a couple of times we kind of got away from what we were taught to do and what we should have done and kind of started doing our own thing. And when you do that against a team like this you’re not going to be successful.”

Helton recovered his own onside kick on the kickoff, and Pepperell attempted a reverse pass on the last play of the game but it was broken up by Lovett.

“I hate it for our seniors,” Hurst said. “But I just told them they’re always welcome here. And I want to see them come back in a couple of years being successful, because that’s what matters.”

Rogers, one of the top running backs in the state as a sophomore, finished with 166 yards rushing, bringing his season total to 1,421 yards and 19 touchdowns. Waddell was 11-of-19 passing for 125 yards.

Lusink finished 13-of-22 for 140 yards passing and three touchdowns, while running for another. The Lions had 288 total yards of offense to Pepperell’s 299.

Lovett moves on to play Callaway next week in Hogansville in the Class AA Sweet 16. Callway’s first-round opponent, Banks County, forfeited their playoff game due to COVID.