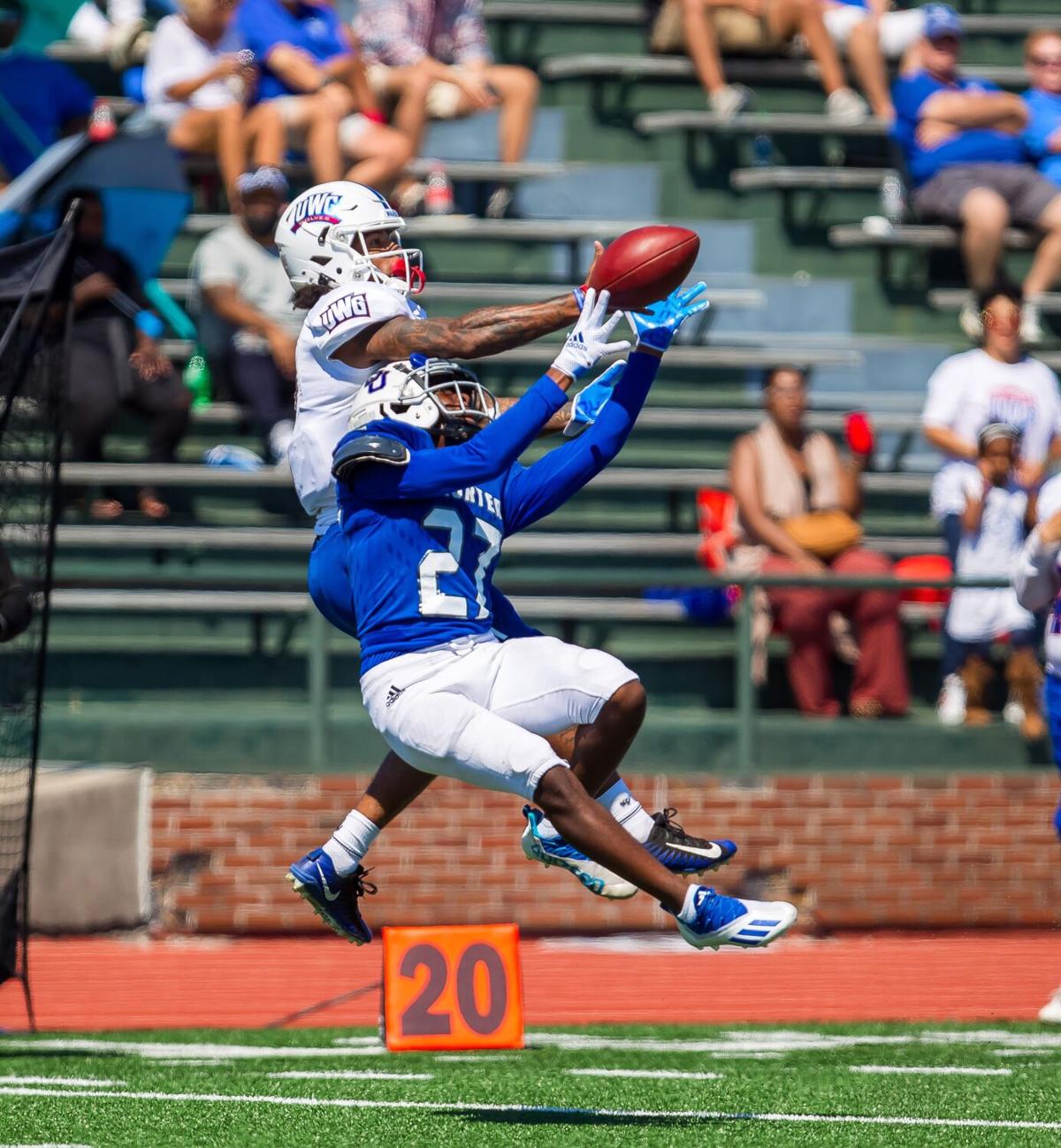 Shorter’s Corey Duffey II (27) breaks up a pass intended for West Georgia’s Mechane Slade during the first half of Saturday’s game at Barron Stadium. 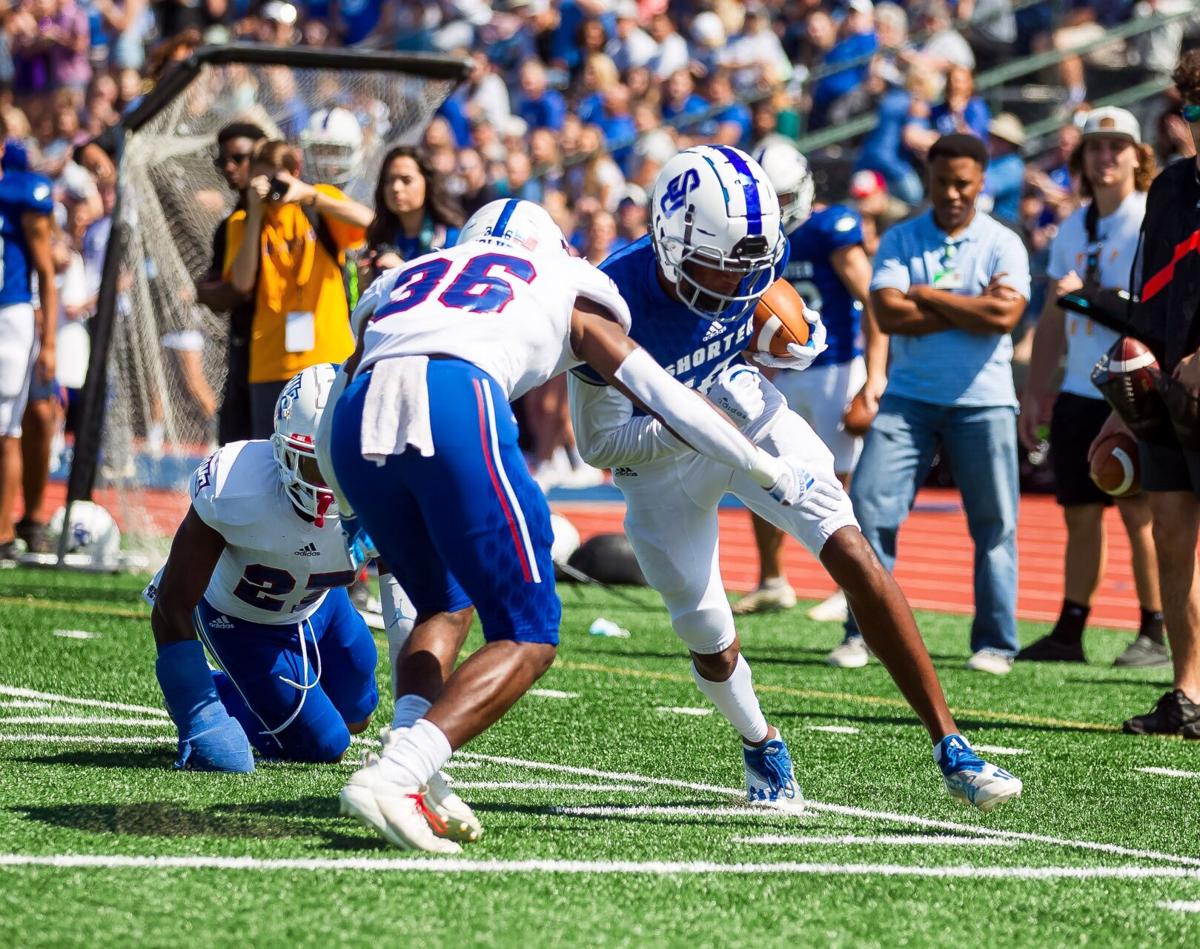 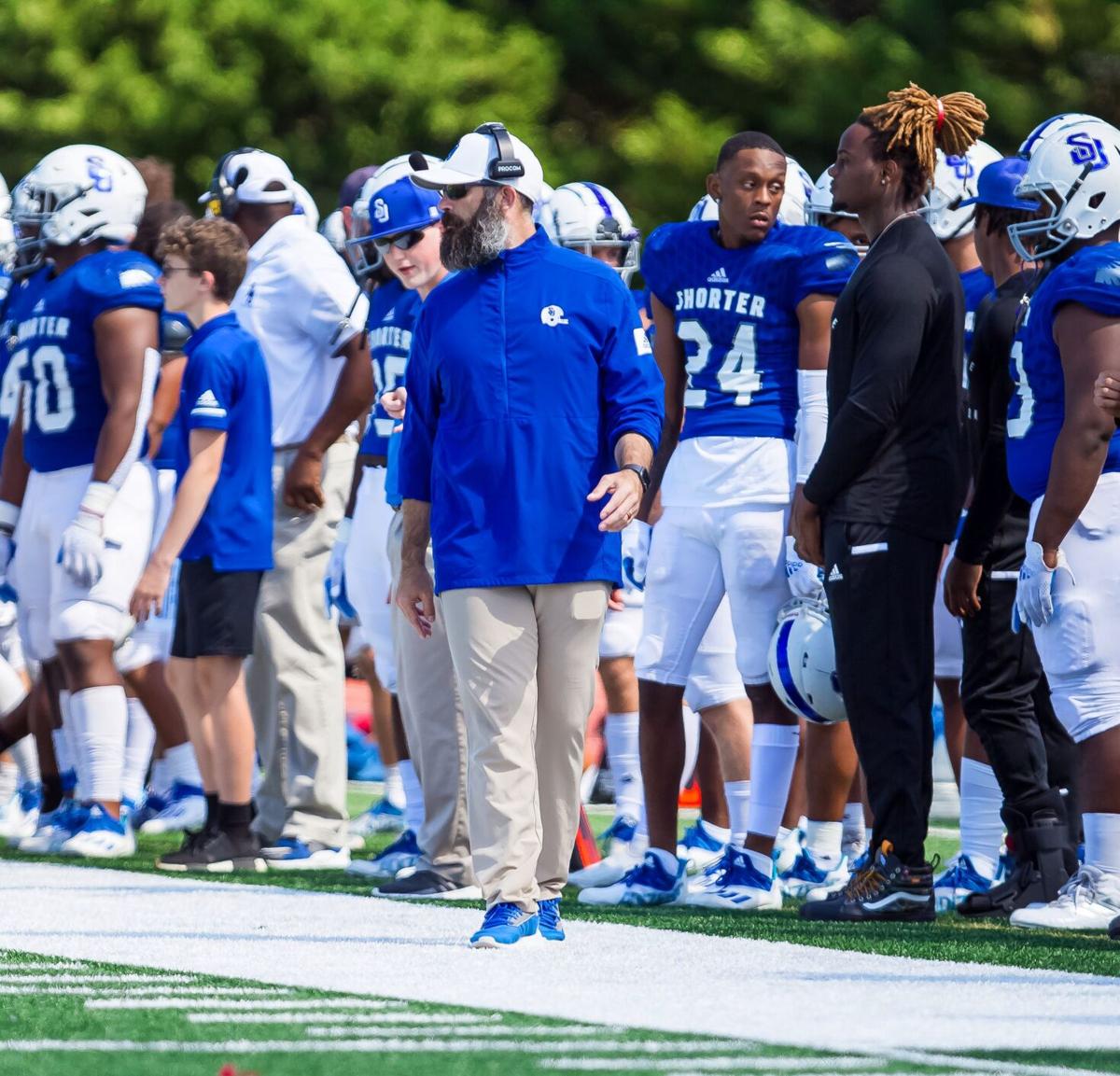 Shorter head coach Zach Morrison looks on from the sideline during Saturday’s game vs. West Georgia.

Shorter’s Corey Duffey II (27) breaks up a pass intended for West Georgia’s Mechane Slade during the first half of Saturday’s game at Barron Stadium.

Shorter head coach Zach Morrison looks on from the sideline during Saturday’s game vs. West Georgia.

Shorter was looking to carry the momentum they had built in the early season into their Gulf South Conference schedule on Saturday when they hosted West Georgia for the Hawks’ conference opener. Unfortunately for the home team, the Wolves were the team that were able to come into the game with momentum and also leave with it as they got up early on the home team and never looked back in a dominant 56-0 victory over Shorter at Barron Stadium.

West Georgia (4-0, 2-0 in GSC) scored 14 first-quarter points, doubled their lead with two more touchdowns in the second quarter and put the game away with a disastrous third quarter for Shorter (2-2, 0-1) as they scored four more unanswered TDs as they Hawks could never get anything positive going in front of their home fans.

Shorter head coach Zach Morrison said his team didn’t have an answer for the talented West Georgia team they squared off against on Saturday while also hurting themselves with self-inflicted mistakes.

“Penalties killed us, and we’ve got to play with more discipline,” said Morrison. “Both ways on the line of scrimmage are areas that need to be improved.

“It was a tough day. For a team full of upperclassmen, we’ve got to play like it. When adversity strikes, we’ve got to figure out how to respond.”

West Georgia opened the scoring on the first drive of the game when they drove deep into Shorter territory and fumbled into the end zone where Wolves’ receiver Phil Patterson recovered the ball for the score. They added another touchdown a few minutes later when they completed a drive with a four-yard TD run by Tyray Devezin.

Shorter had their best chance at scoring on the next drive when they put together several successful plays that took the ball inside the red zone, but they were turned away when quarterback Aeneas Dennis threw an interception that was hauled in by West Georgia’s Antoine Davis.

West Georgia’s offense continued to roll in the second quarter, adding touchdowns on a three-yard run by Rajaez Mosley and a 41-yard scamper by Devezin to push the lead to 28-0, which was the advantage at the break as the Hawks’ offense couldn’t seem to get out of first gear.

The third quarter featured much of the same with Shorter making mistakes on both sides of the ball, including several missed tackles that helped West Georgia add 28 more points. The Wolves got touchdowns on a 43-yard pass from Harrison Frost to Terrill Cole, a 58-yard run by Jace Jordan, an 87-yard pass from Garrett Bass to Za’Ta Anderson and a 30-yard run by Christian Royalston.

The fourth quarter was shortened to 10 minutes due to the Wolves’ 50-plus point lead.

Frost had a big day through the air as the junior QB threw for 315 yards on 16-of-22 attempts with a touchdown. Devezin led the rushing totals with 79 yards on six carries with his two touchdowns, and Jordan and Royalston both eclipsed the 40-yard mark in the rushing department. West Georgia finished with a 653 yards of total offense while Shorter only had 248 total yards.

Shorter’s offense was held in check by a swarming Wolves’ defense. Dennis threw for 127 yards on 15-of-26 attempts with an interception, and he was also the Hawks’ leading rusher with 37 yards on the ground. Noah Holland added 34 yards on the ground, and Tyrell Owens ran for 27 as Shorter was without starting running back Jaiden Dollard who missed the game due to injury.

The schedule doesn’t get any easier as Shorter travels to Valdosta State next Saturday night for a 7 p.m. kickoff.

“Expectations for next week are to prepare and practice a lot better than we did for today,” said Morrison. “We’re going to preach the little things…ball security, pad level, wrapping up. We’ve got to fix the details.”

West Georgia will be back at home next week to host West Alabama on Saturday at 6 p.m.