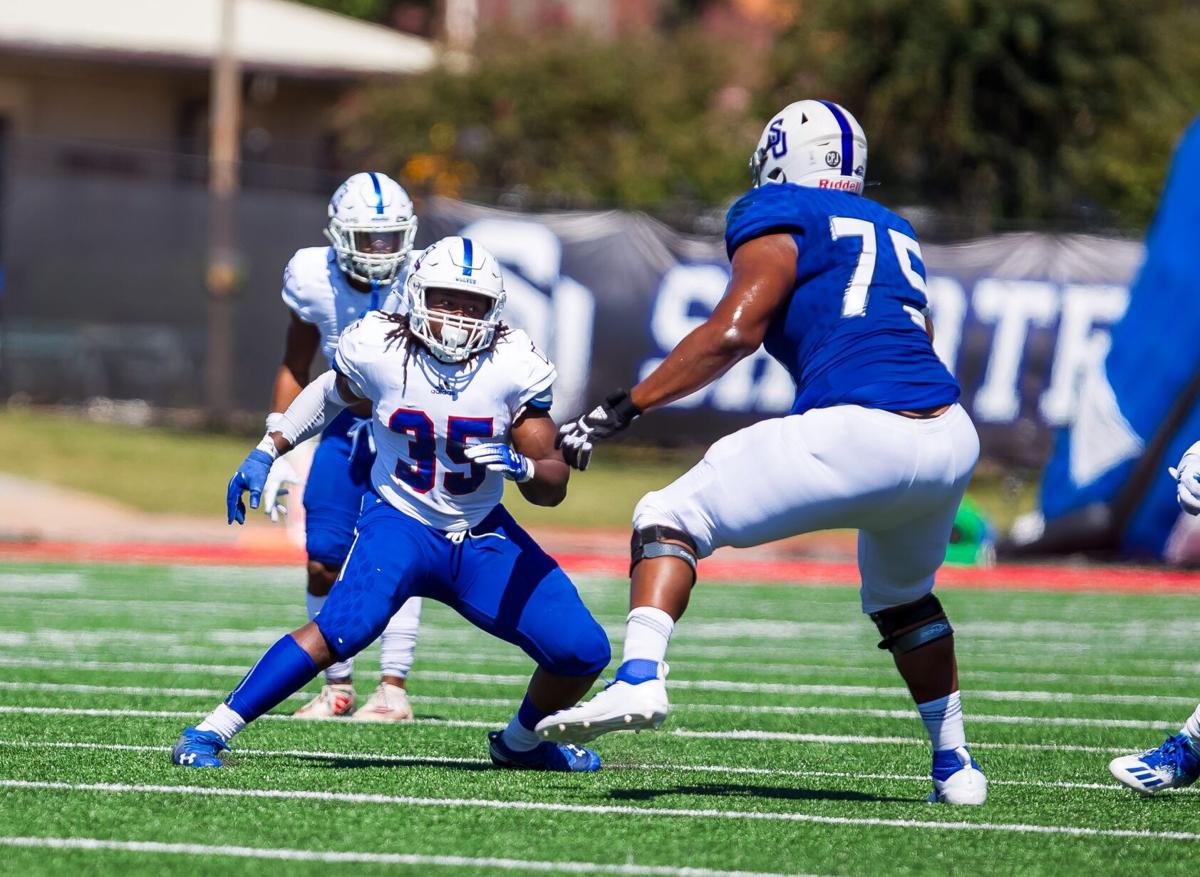 West Georgia’s TJ Arnold (35) makes a move to try to get around a Shorter offensive lineman during last Saturday’s game at Barron Stadium.

There has been a lot of great football talent developed locally from the youth ranks all the way up through high school in recent years, and that is nowhere more evident than on the fields across the country on any given Saturday in the Fall.

Close to 50 former standouts from that made their name playing for the local high school programs are currently playing on the college level and many of those are making a huge impact for their respective teams.

Here is a look at how those players did in their most recent games (players must appear in participation report for game to be included in this roundup):

Hammond, a linebacker, had three assisted tackles, including a half a tackle-for-loss, and a fumble recovery for a touchdown in the Patriots’ 63-14 win at home over Southeastern last Saturday. The junior also had one pass breakup.

Arnold got the start at defensive end for the Wolves, and the senior had one assisted tackle in the team’s 56-0 win over Shorter at Barron Stadium on Saturday.

Collins, a redshirt-sophomore, got the start at running back and ran for 104 yards on 22 carries with two touchdowns in the Eagles’ 34-33 loss at Bethel. He also played some on the defensive side of the ball and recorded two solo tackles, including a tackle-for-loss in the game.

Griffin, a redshirt-sophomore defensive lineman, had a sack in the Jackets’ 45-22 win over North Carolina on Saturday night at Mercedes-Benz Stadium.

Nadu started as a defensive back on Saturday for the Fighting Scots and had four total tackles (two solo, two assists) and a sack in a 34-30 home loss against Depauw.

Burge, a freshman running back, had 44 yards on seven carries with a long of 12 in the 19-7 Phoenix home win on Saturday.

Roberts, a sophomore free safety, had two solo tackles and one interception in the Patriots’ 63-14 home win over Southeastern on Saturday.

Lawrence, a graduate-senior, got the start at defensive end for the Paladins and recorded five total tackles (two solo, three assists) in a 24-3 home loss to Mercer last Saturday.

The redshirt-junior defensive lineman had one quarterback hurry in the Hokies’ 21-10 win at home over Richmond on Saturday.

Leslie, a freshman, got the start on the offensive line in the Hilltoppers’ 33-31 home loss to Indiana on Saturday.

The graduate-senior linebacker McKoy recorded three total tackles (two solo, one assist), including one and a half tackles-for-loss in the Paladins’ 24-3 home loss to Mercer on Saturday.

Griffin, a sophomore running back, participated but didn’t record any stats in the Jackets’ 45-22 win over North Carolina at Mercedes-Benz Stadium on Saturday.

The freshman wide receiver Sims had one kickoff return for 13 yards in the Knights’ 20-19 home win over Ave Maria on Saturday.

Anderson, a senior outside linebacker, participated but didn’t record any stats in the Bulldogs’ 62-0 win at Vanderbilt on Saturday.

Vilsaint, a freshman offensive lineman, started at right guard for the Hawks in their 21-14 win at Brevard on Saturday.

Chandler, a junior wide receiver, had two kickoff returns for a total of 57 yards and a long of 43 on Saturday in the Scots’ 47-10 loss at Averett.

The sophomore offensive lineman Langford got the start at left tackle in the Tigers’ 49-27 loss on the road at Hendrix on Saturday.

Thomas, a senior quarterback, threw for 49 yards on 3-of-6 passing in the Scots’ 47-10 road loss against Averett on Saturday. He also had one rushing attempt in the game.

O’Neal, a senior offensive lineman, got the start at right guard for the Hawks in their 56-0 loss to West Georgia on Saturday at Barron Stadium in the team’s Gulf South Conference opener.

Kadum, a redshirt-freshman quarterback, had one pass attempt in the Hokies’ 21-10 home victory over Richmond on Saturday.

The freshman running back Lackey had one carry for seven yards in the Hawks’ 21-14 win at Brevard last Saturday.

Wright, a sophomore wide receiver, had one catch for four yards in the Scots’ 47-10 loss at Averett on Saturday.

Brown, a redshirt-freshman tight end, participated but didn’t record any stats in the Gamecocks’ 34-31 home loss to UT-Martin last Saturday.

Ball, a senior defensive lineman, participated but didn’t record any stats in the Terriers’ 31-23 loss at Virginia Military Institute on Saturday.

Watson, a redshirt-sophomore tight end, participated but didn’t record any stats in the Blue Hose’s 63-43 loss at Dayton on Saturday.

NOTE: If there is a former local player making an impact in college football and we left them out, please let us know by emailing sports editor Alex Farrer at afarrer@rn-t.com.