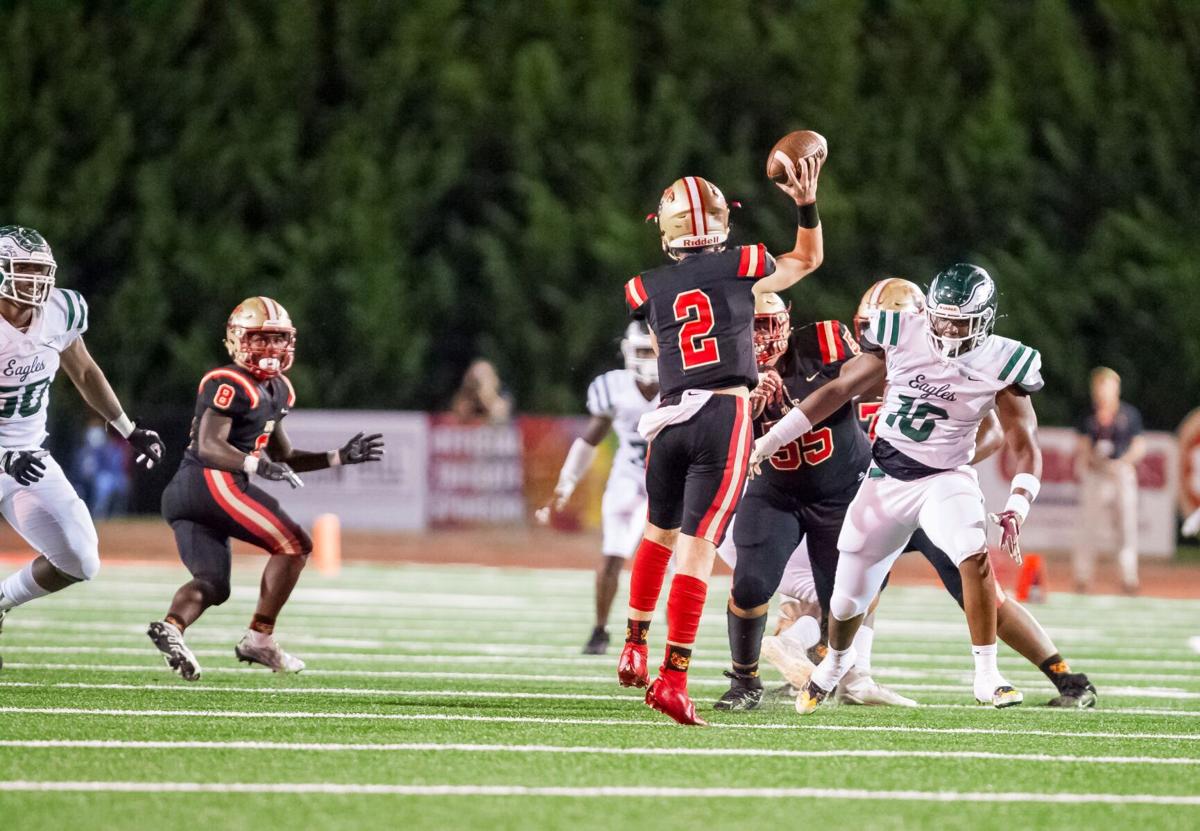 Rome’s Reece Fountain (2) attempts a throw to teammate CJ Flemister (8) during a game earlier this season against Collins Hill. 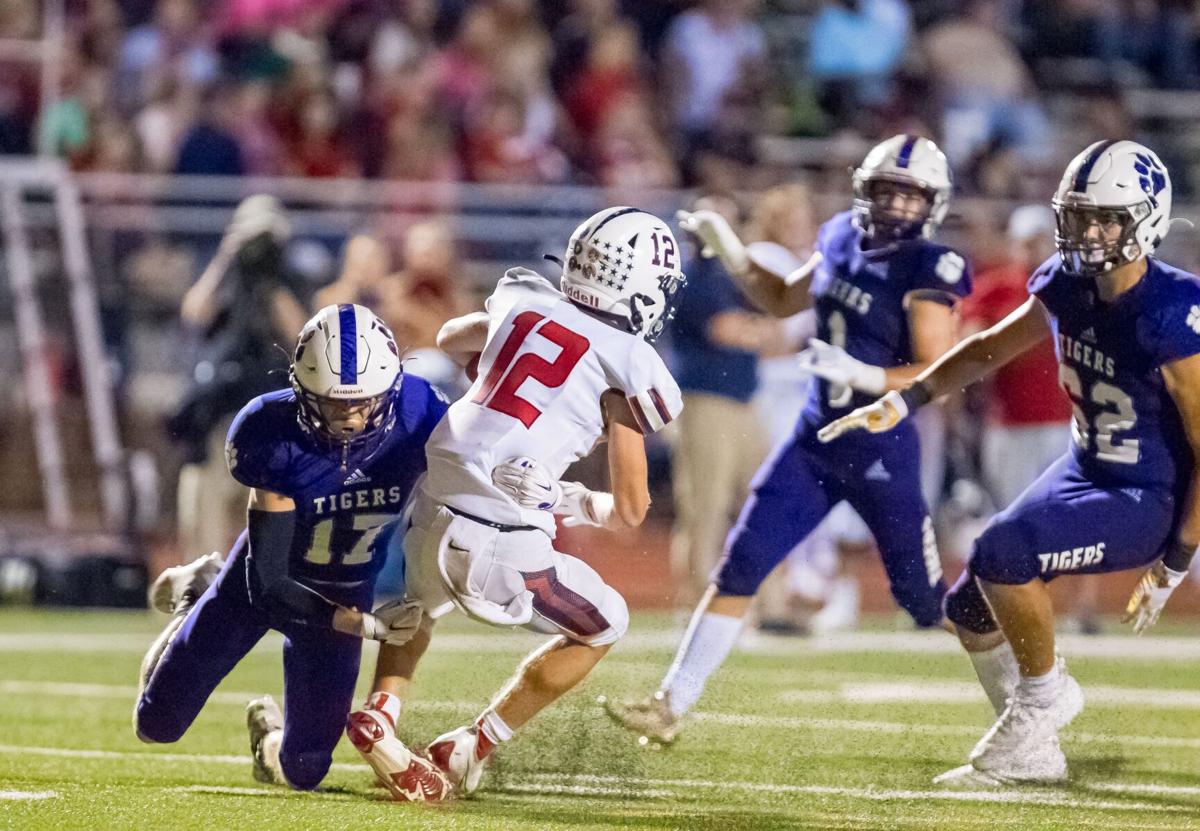 Darlington’s Slade Clevenger (17) makes a tackle against Heritage during a game earlier this season.

Rome’s Reece Fountain (2) attempts a throw to teammate CJ Flemister (8) during a game earlier this season against Collins Hill.

Darlington’s Slade Clevenger (17) makes a tackle against Heritage during a game earlier this season.

It’s Football Friday once again in Rome and Floyd County, and the schedule is packed with great matchups involving local teams.

It’s a full slate this week as every team within the county is in action, whether on their friendly home turf or making a road trip. There is some added intrigue as well with multiple teams playing region opponents with playoff implications even early in the season

Here is a look at the matchups for Friday night and what to expect from each of them:

Outlook: The Wolves dropped a tough one last week as they opened 5-AAAAAA play with a narrow loss at South Paulding so they will be looking to bounce back and get to .500 in the region. But the thing about this region is there are not very many “get-right” games on the schedule as every week poses a huge challenge. That’s the case this Friday for sure as Rome welcomes undefeated and state-ranked Carrollton to Barron Stadium. The Trojans are the defending region champs and look just as good, if not better, than last year’s team. Quarterback MJ Morris, who transferred back to Carrollton for his senior season after a year at Pace Academy, is off to an incredible start in 2021. The N.C. State commit has thrown for more than 1,000 yards and 16 touchdowns through four games so Rome’s pass rush and secondary have quite a task on their hands this week. Morris has plenty of speedy, explosive weapons at his disposal on offense as well that the Wolves will have to account for or a big play could happen at any moment. The Trojans’ defense is no slouch either as they have given up 15 or less points in three of their four games. Rome’s offense has to make the most of their possessions on Friday and put together some long, successful scoring drives as well as taking care of the ball. Turnovers against Carrollton would be a recipe for disaster. Expect the Wolves to rise to the challenge, but the Trojans get out of the city with a victory.

Outlook: Armuchee has all the momentum in the world as they are off to an undefeated start in 2021 and playing their most consistent, complete football since 2009 when the late, great John Mullinax led the Indians to a 4-0 start and eventually a home state playoff game. The confidence is building among the team and the fan base, and they should have another good chance to celebrate on Friday night as they welcome a struggling Weaver squad from the state immediately to the west. The Bearcats have a young team that is looking to develop some consistency itself. The Indians ground game has been strong so far led by senior back Alex Wright, and the passing game has shown improvement every week as well with quarterback Chandler Desanto coming into his own and distributing the ball to Armuchee’s multiple talented targets. The defense has done their part as well forcing turnovers in big spots, a trend that should continue this week. Get ready for a fun night in Armuchee, Indians fans.

Outlook: The Tigers’ non-region portion of the schedule continues this week with a trip to metro-Atlanta and a test against King’s Ridge Christian, whose only defeat so far in 2021 was a two-point loss at Christian Heritage. Darlington has built on each performance they’ve had over the last few weeks and seemed to improve on both sides of the ball each Friday, culminating with a huge second half last week when they ran away from a previously-undefeated Heritage-Catoosa team. The Tigers’ offense has shown the ability to put together impressive drives no matter which quarterback is leading the way with seniors Jack Payne and Patrick Shelley each contributing solid reps. The running back combo of Caleb Thompson and D’Marion Floyd has been stellar as well as they racked up a combined 200-plus yard game in last week’s win. Expect more of the same in this game against King’s Ridge Christian as Darlington and coach Tommy Atha keep things rolling as they prepare for the Region 7-A Private schedule to begin in a few weeks.

Outlook: Pepperell got exactly what they needed last Friday as they jumped out to an early lead and held off Temple in the second half to earn their first win of 2021 and go into Region 7-AA play with some mojo. Running back DJ Rogers continued his ridiculous pace last Friday, and he should keep on keeping on as he is one of, if not the, top player in 7-AA. Pepperell has been able to compliment the running game as well with an improving passing game led by quarterback Matthew Waddell, who seems to improve by the week. It’s a long road trip up to the northwestern part of the state, but the Dragons should have a fun trip back after a dominant win against a Dade County team that has improved in some areas but are still expected to finish toward the bottom of 7-AA.

Outlook: These two 7-AA playoff teams from last season are trying to find their footing in 2021 as they break in much younger teams with a lot of talent graduating at the end of last year’s successful campaigns. Model has had a tough go of it in the non-region portion of the schedule, losing to some tough opponents while the youthful roster gets a bit of a trial by fire. Chattooga is in a similar spot as they suffered some early losses to quality opponents while the Indians tried to find out what they could hang their hat on this season. Both teams’ defenses have struggled to stop opponents in the last few weeks so this could be a chance for each offense to have a breakout night. The Devils are coming off an idle week so they should be rested and improved after a week of working on themselves rather than game-planning for an opponent. Expect a bit of a shootout with Model making a few more plays in the final quarter to open the region schedule 1-0.

Outlook: The Eagles are coming out of an off week that was much needed after a tough start to the season and some injury issues that had piled up in their first three games. They should be well-rested and ready to turn things around, but a difficult task awaits them across the state line as they visit a Cherokee County (Ala.) team that has become a perennial playoff team in recent years under the direction of head coach Jacob Kelley, a former Cedartown standout and assistant coach. The Warriors have put up some big numbers offensively early this season, including a 40-point outburst last week in a win over White Plains. The Eagles need to play a lot cleaner football than they have early on this season with turnovers being a huge issue. Coosa should be better as they near the midpoint of the schedule, but Cherokee County is just too deep and talented and also playing in front of their loud home crowd.

Outlook: The Lions bounced back in a big way last Friday with a 66-6 win at home over Praise Academy. Coach David Humphreys has his team playing hard-nosed, consistent, aggressive football, and they should continue that same approach this week on the road against a Dominion Christian team that won’t be able to keep up.