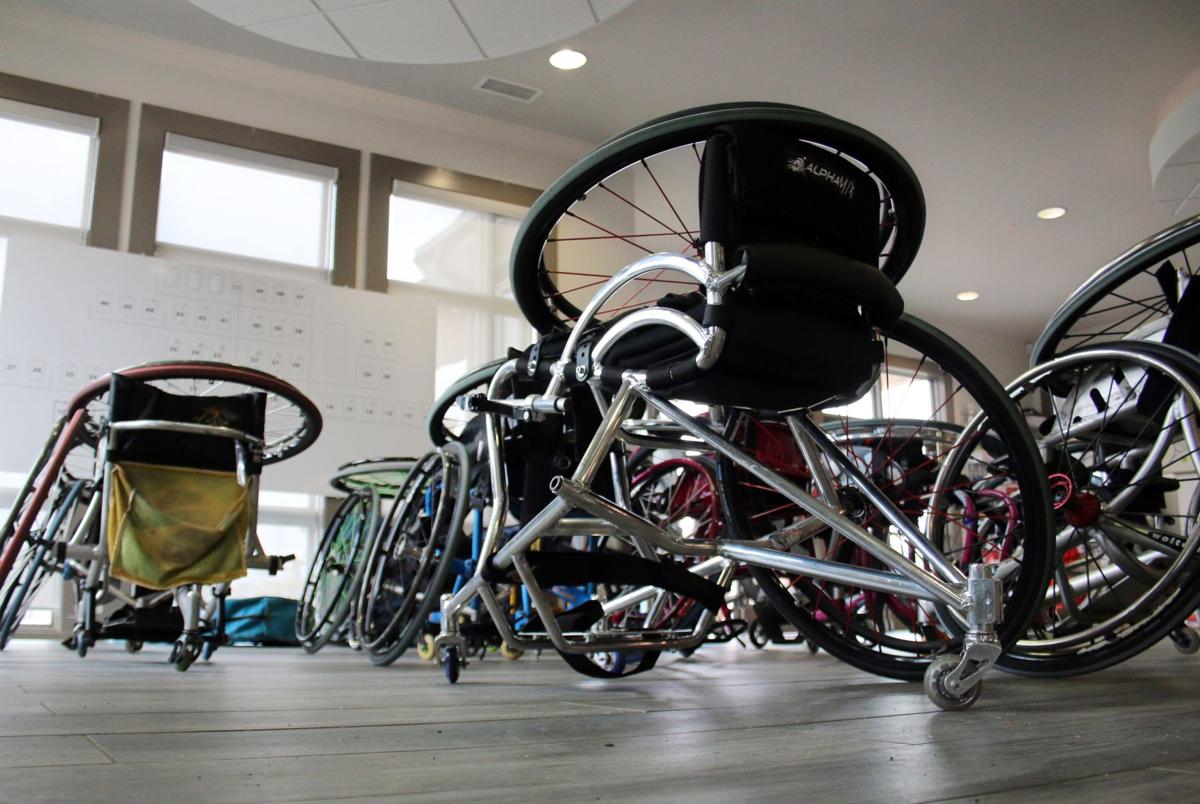 Sports wheelchairs of some of the players at the ITF Georgia Open Wheelchair Championships sit empty in the clubhouse at the Rome Tennis Center at Berry College on Thursday afternoon after the tournament was canceled following the impact of the COVID-19 virus. 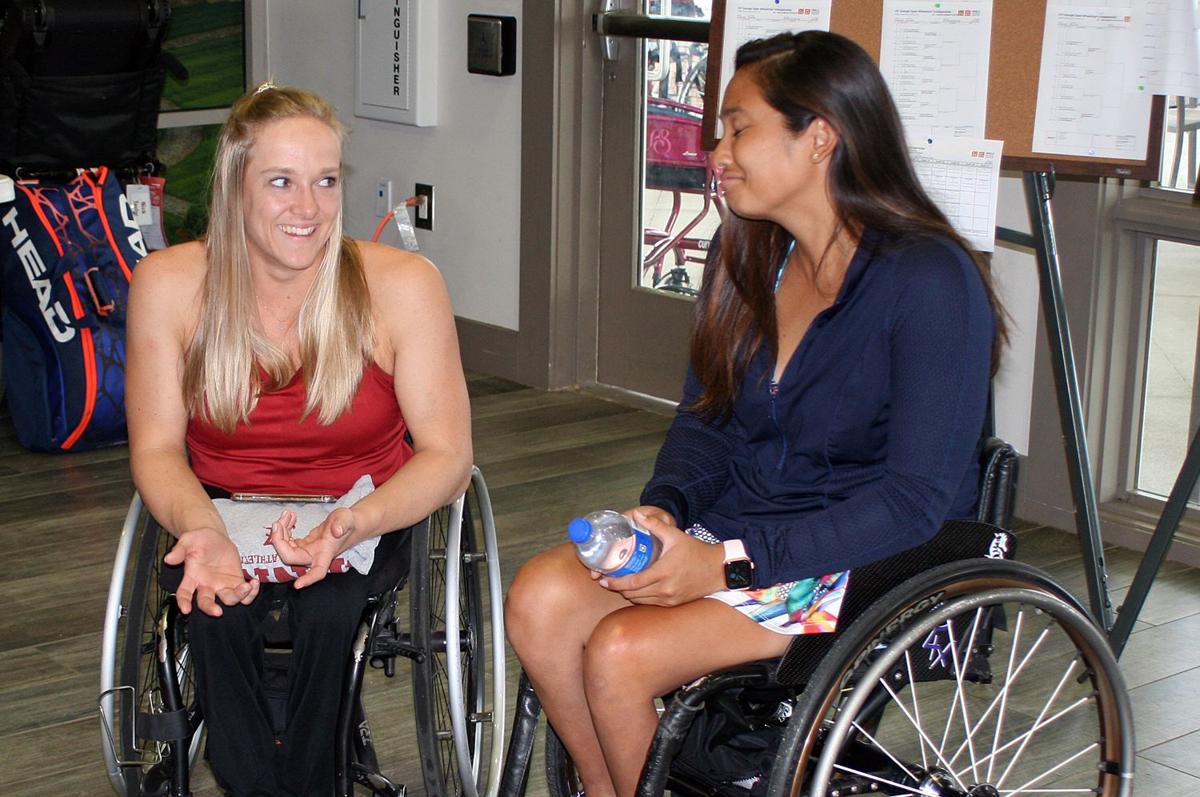 Lauren Haneke-Hopps (left) and Shelby Baron, both players on the Universty of Alabama wheelchair tennis team, were the last wheelchair tennis players at the Rome Tennis Center after the tournament was canceled Thursday.

Sports wheelchairs of some of the players at the ITF Georgia Open Wheelchair Championships sit empty in the clubhouse at the Rome Tennis Center at Berry College on Thursday afternoon after the tournament was canceled following the impact of the COVID-19 virus.

Lauren Haneke-Hopps (left) and Shelby Baron, both players on the Universty of Alabama wheelchair tennis team, were the last wheelchair tennis players at the Rome Tennis Center after the tournament was canceled Thursday.

The impact of what Armuchee girls’ tennis coach Mary Stuart Ratledge had just read was still ricocheting around her head as she tried to comprehend what it meant.

The short answer is her team was about to play their last match in two weeks. The long answer is that the response to the COVID-19 virus had brought Georgia high school sports into its sight and the future of any spring sports being played in the near future is now in doubt.

“It will be for the next two weeks at least,” Harris said. “We’ll play it by ear then and see where we’re at.”

FOR YOUNG AND UP

Local recreational and collegiate sports are also on the list of suspended activities.

Rome-Floyd Parks and Recreation released a statement Thursday announcing the suspension of all sponsored outdoor sports for two weeks, while gymnastics and other indoor activities, including senior citizen events, are canceled until further notice.

Shorter University is canceling all sports contests and practices through April 10, while Berry College has yet to make a full announcement regarding their athletic programs.

A release from the college on Thursday announcing it was closing its campus to visitors stated that the school’s conference — the Southern Athletic Association — has suspended all conference competition for the season.

Berry Sports Information Director Blake Childers said in an email that they are planning a release Friday with more information.

The International Tennis Federation canceled the Georgia Open Wheelchair Championships on Thursday, cutting short the tournament at the Rome Tennis Center at Berry College before a second round could begin.

Shelby Baron and Lauren Haneke-Hopps, University of Alabama wheelchair team players, were literally the last players to leave the facility Thursday. Baron expressed disappointment at the cancellation but said she fully understood the gravity of the health ramifications.

She is hoping to earn enough points to make the U.S. Paralympic team this year.

“We’re in the middle of paralympic qualifying and this was the first high-level tournament of the year where we could earn points and prize money,” she said, then quickly added, “We don’t even know if we’re going to have an Olympics. This is putting everybody in a panic health-wise and tournament-wise.”

Baron said she felt particularly bad about the cancellation for players who received wild card entries to the Rome event after a tournament in Malaysia was cancelled.

“They flew all the way here and then this cancels,” Baron said.

That means the Rome Braves’ April 9 season opener at State Mutual Stadium will not happen. Exactly when the team will report and the season will actually start remains to be seen.

A post on the Rome Braves’ official Twitter said the team has no additional information at this time and will provide updates as they receive guidance from the Atlanta Braves and MiLB. The team is set to host the 2020 South Atlantic League All-Star Game on June 23.

Another postponement affecting local sports fans is the decision by the Harlem Globetrotters to suspend all of their planned games on their tour from March 13-19, which includes the March 16 date at Darlington School’s Huffman Center.

A release by the Globetrotters stated that the team will reschedule any missed dates as soon as possible with tickets for postponed games honored for the new dates.

A TOUGH SEASON MADE TOUGHER

With many high school sports teams still trying to play rescheduled games postponed because of recent rain, having sports suspended for two weeks leaves little room to try and complete the games necessary for a regular season.

The decision to pause spring sports is left up to the individual school systems, not mandated by the GHSA. Although the GHSA recommended Thursday that all member schools suspend spring sports activities for two weeks following Georgia Gov. Brian Kemp’s request.

“The regular season belongs to the schools themselves,“ said Dr. Robin Hines, executive director of the GHSA in a statement. “We can only recommend that they suspend playing. The final decision will rest with the local school systems, but we hope they heed the Governor’s and the GHSA’s recommendations.”

Coosa High School Athletic Director Jeff Shiflett said he feels most everyone in the GHSA will follow the recommendation, although what happens after is still a mystery.

“Everybody is in the same boat,” Shiflett said in regards to the suspension. “Schools got something from the GHSA about a week ago noting that it’s the regions’ responsibility to decide their state playoffs representatives. There will be a lot of things to figure out once everybody comes back.”