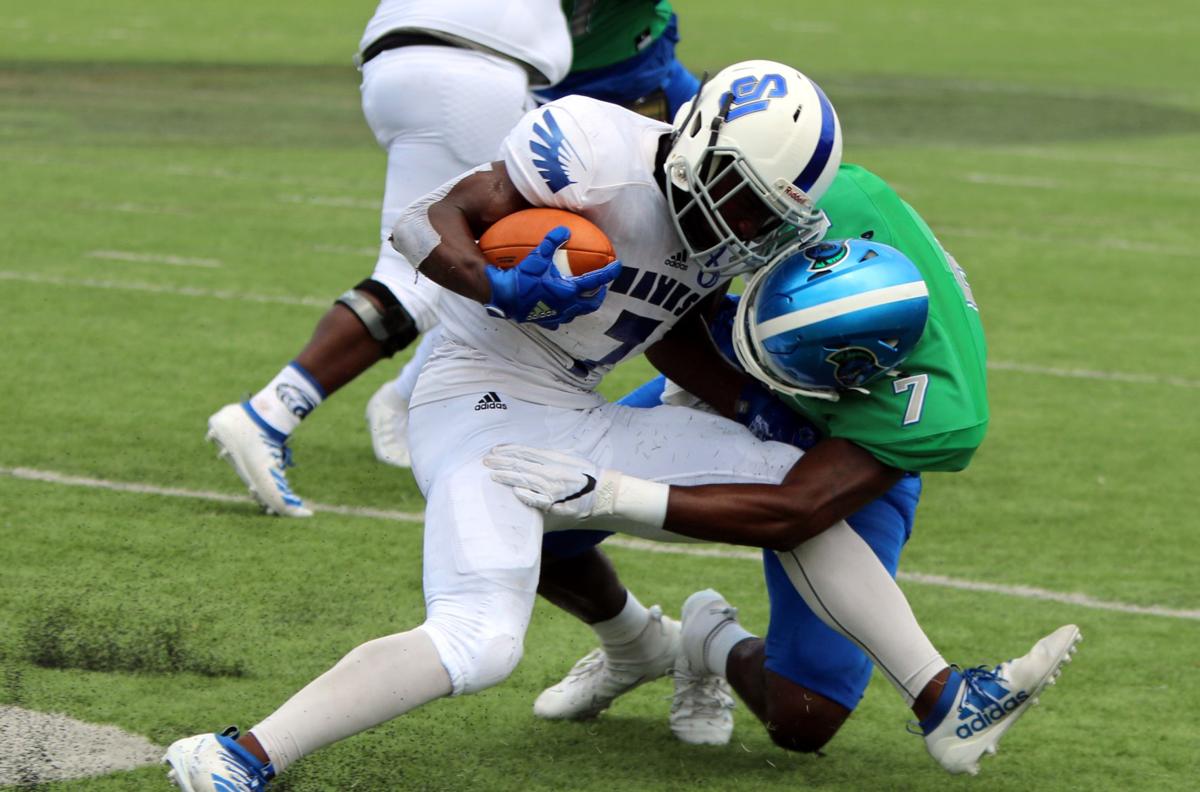 Shorter running back Gregory Fields Jr. (left) is tackled by West Florida’s D’Anthony Bell during the first quarter of Saturday’s game at Barron Stadium. The Hawks lost 42-14 after going into halftime tied 14-14 with the Argonauts. 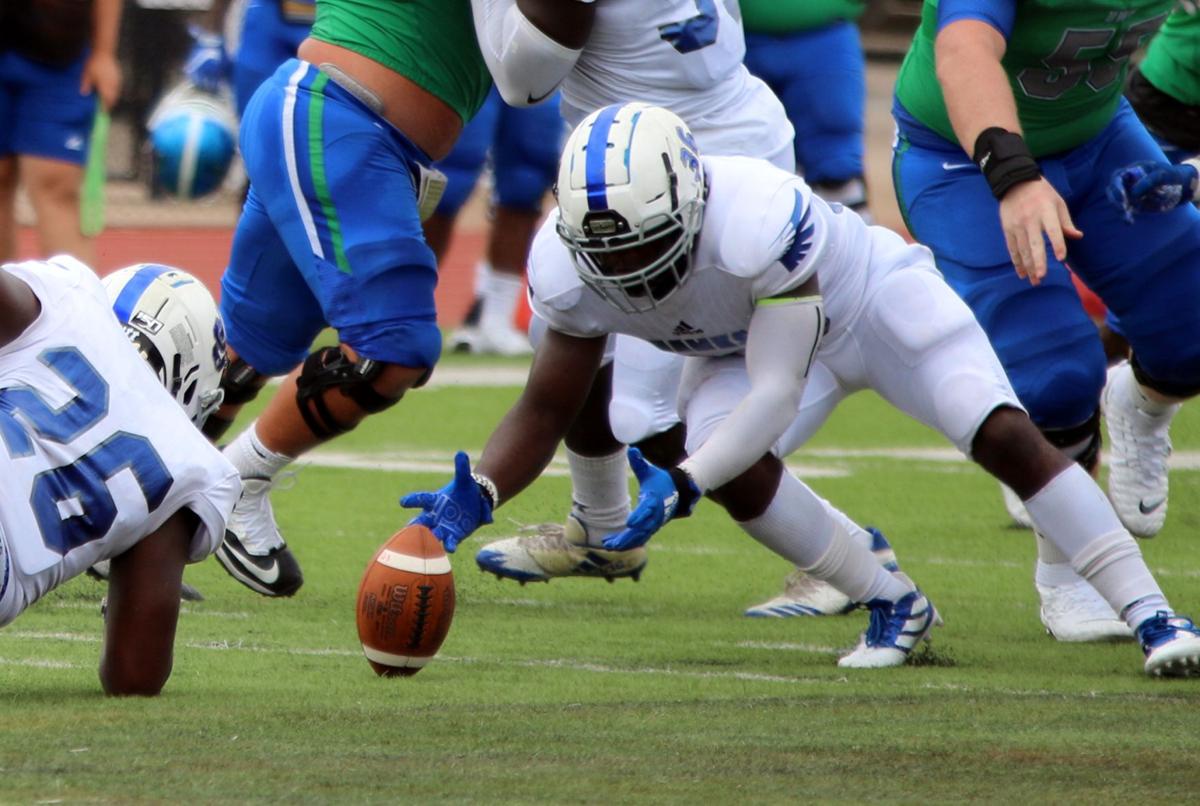 Shorter linebacker Drew Tossie dives onto a loose ball for a fumble recovery during the second quarter of Saturday’s game against West Florida. 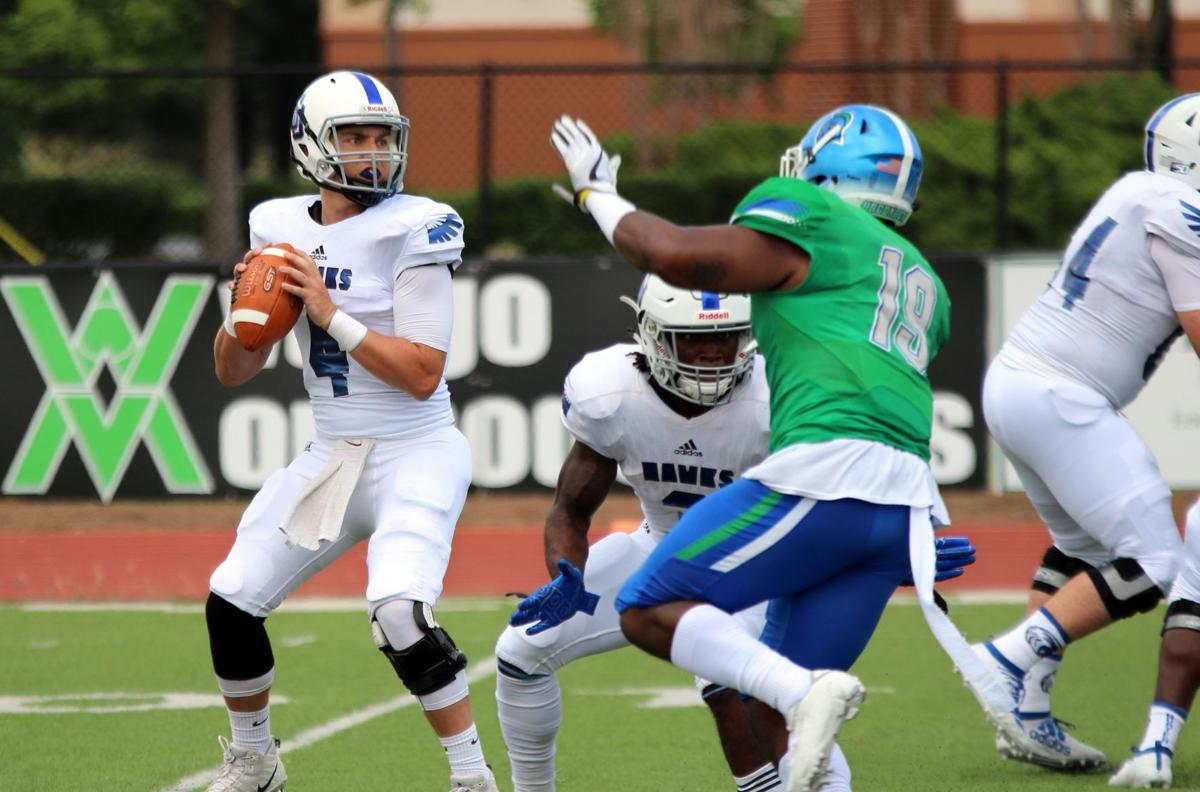 Shorter running back Gregory Fields Jr. (left) is tackled by West Florida’s D’Anthony Bell during the first quarter of Saturday’s game at Barron Stadium. The Hawks lost 42-14 after going into halftime tied 14-14 with the Argonauts.

Shorter linebacker Drew Tossie dives onto a loose ball for a fumble recovery during the second quarter of Saturday’s game against West Florida.

For two quarters Saturday the Shorter football team matched its opponent blow for blow in the Hawks’ home opener, providing a glimpse of what head coach Zach Morrison and his staff have been building since last year.

But as halftime came and went, that glimpse began to fade. And it left another tough loss for Shorter in its wake.

After clamping down on West Florida’s offense in the second quarter and ending the first half tied 14-14, Shorter failed to find that spark again as the visiting Argonauts scored four unanswered touchdowns in the second half in a 42-14 Gulf South Conference Hawks loss.

“We’re playing fast. We’re playing better. We’ve just got to be more consistent at what we do. That’s pretty much what it is,” Morrison said. “It shows you how close we are as a team of mostly freshmen and sophomores of being where we want to be. They’re committed, and I’m proud of them, but, man, it just hurts. It hurts to see how close we are.”

Shorter (0-2, 0-1 GSC) held West Florida to 58 yards of offense in the second quarter and ended one Argonaut drive when freshman linebacker Drew Tossie jumped on a forced fumble by senior lineman Terrance Snellings.

West Florida (1-1, 1-0) pulled even in the turnover battle three possessions later when Chanler Ferguson stepped in front of a pass by Shorter’s Tyler Pullum and picked off the senior quarterback. Both teams missed a field goal attempt on their last full drives of the first half to go into the locker room knotted up at 14 each.

“Tyler tried to throw a ball in a tight window and the kid made an awesome play,” Morrison said. “Defensively, recovering the fumble was huge. We talk about wanting to get more and getting the ball as one of the mindsets of the defense. It’s good for where we’re heading.”

Both of West Florida’s first-half touchdowns came on quarterback keeps from inside the 10 in the opening quarter by redshirt freshman Austin Reed, one ending a 78-yard drive and the other a 76-yard drive.

“We came out with a lot of energy, lots of excitement. Things we’ve been talking about — effort, attitude, toughness,” Morrison said. “Man, we are fighting our tails off in the first half. It’s about how we finish.”

The Argonauts took the second-half kickoff down the field 71 yards in five plays, ending with an 8-yard pass from Reed to Kevin Grant. Reed would cap the next four West Florida possessions with touchdown passes, while Shorter would punt to end its next three.

“We came out after halftime and made some adjustments. Those adjustments didn’t quite work on both sides of the ball,” Morrison said. “Their offense kind of picked our secondary apart a little bit, and offensively we wanted to run the ball in the second half, and that didn’t work.”

Pullum finished 16-of-26 for 172 yards passing, while Lanier led all rushers with 80 yards on seven carries. Bradley Kirk was the Hawks’ leading tackler with seven solo tackles and three assists. Nemo Reddish was next with four of each.

The game marked Shorter’s 41st straight loss, a streak that includes three winless seasons and dates back to 2015, three seasons before Morrison returned to his alma mater to take the reins of the team.

Shorter will be on the road Saturday as the Hawks travel out of conference for a contest with fellow Division II team Fort Valley State.