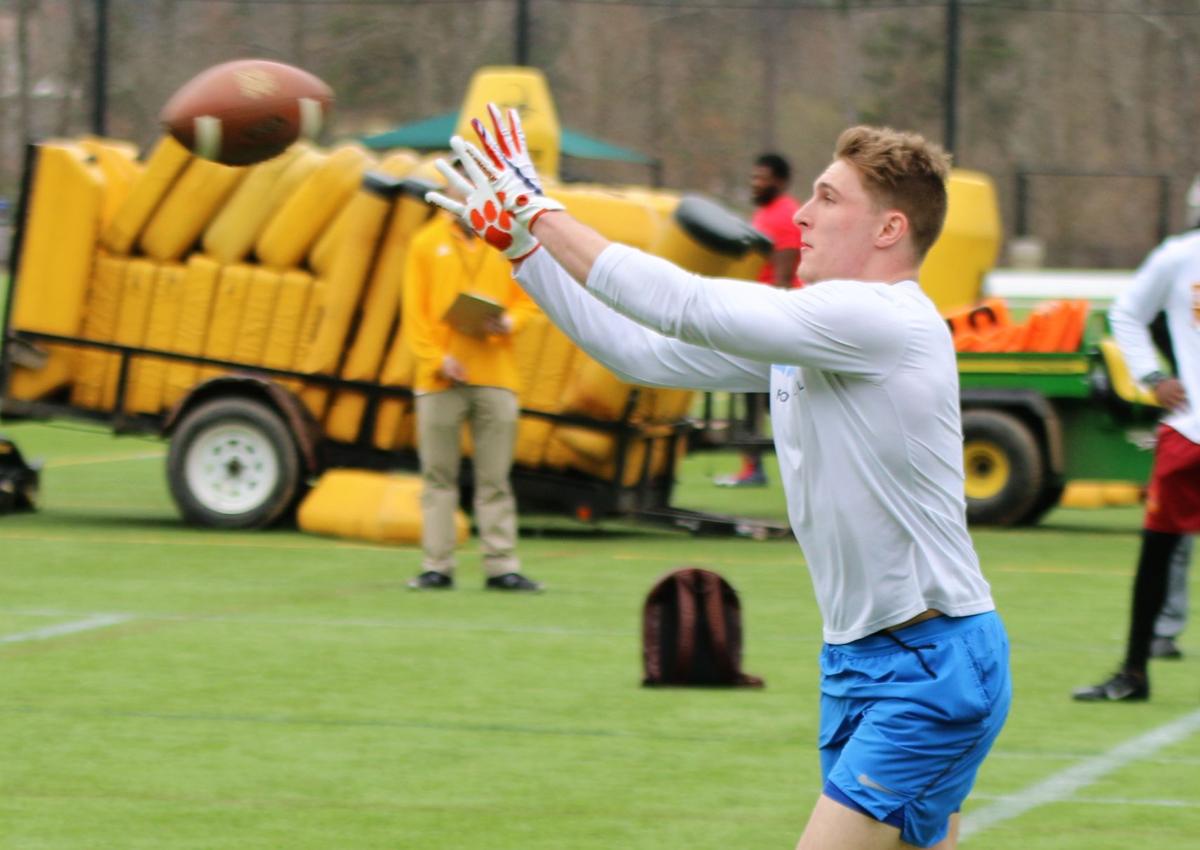 Mason Kinsey reaches out for a pass during a drill Wednesday as part of Kennesaw State’s Pro Day. The former Berry wide receiver was one of several football players working out for NFL scouts. 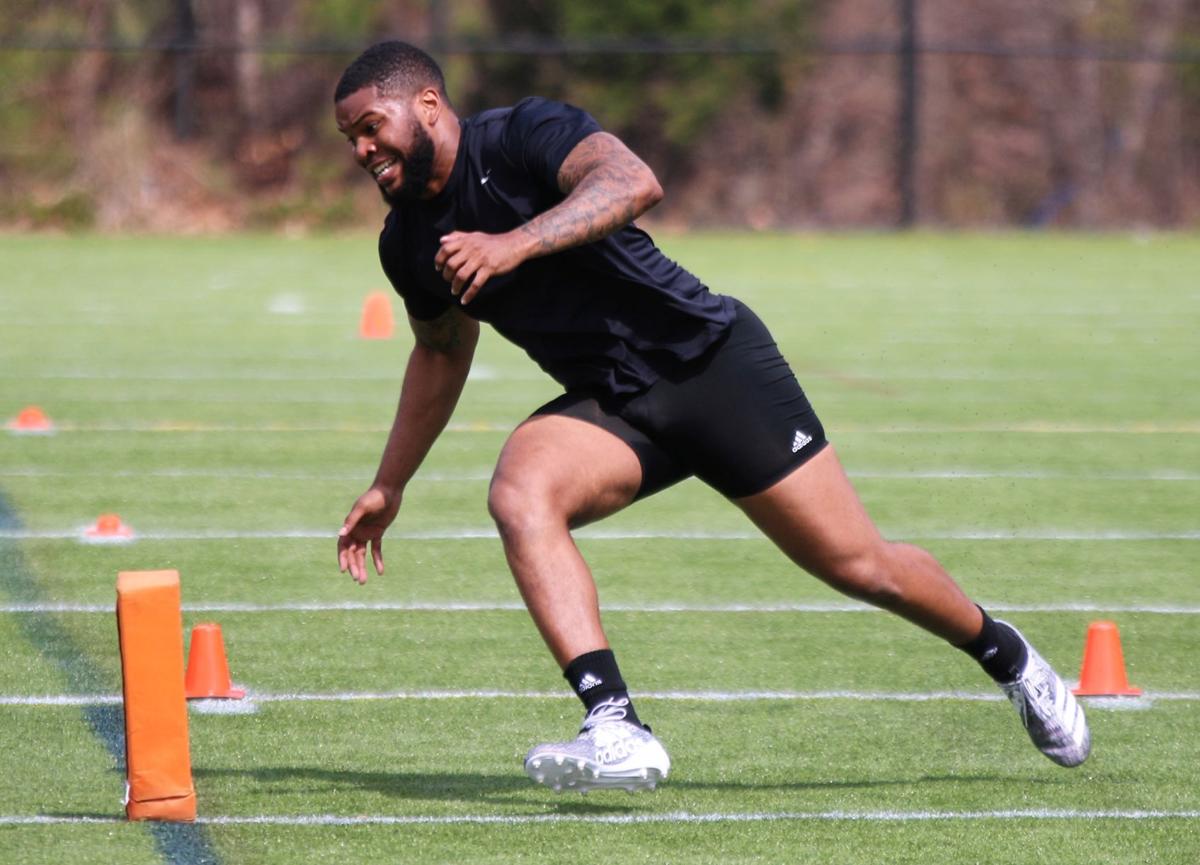 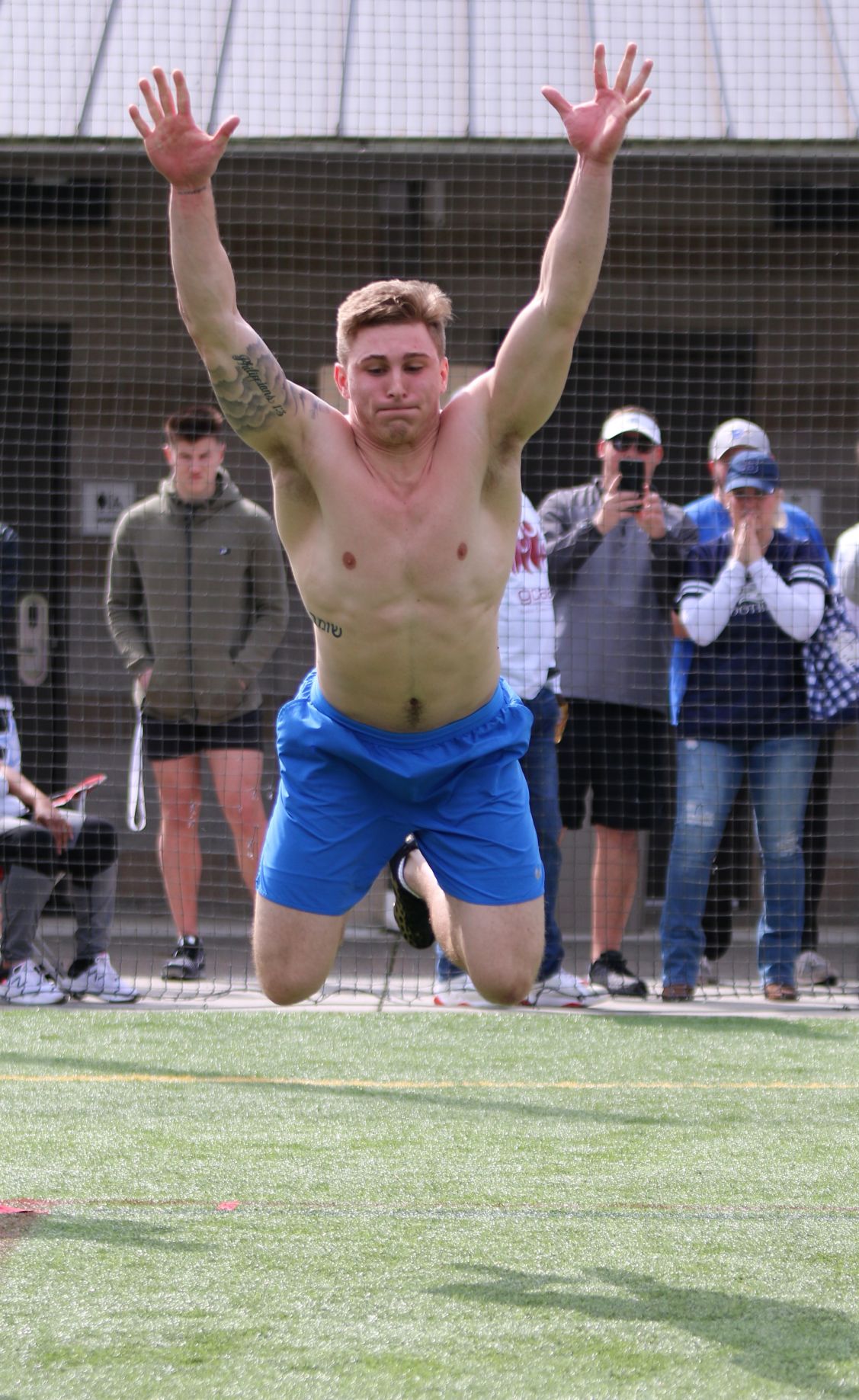 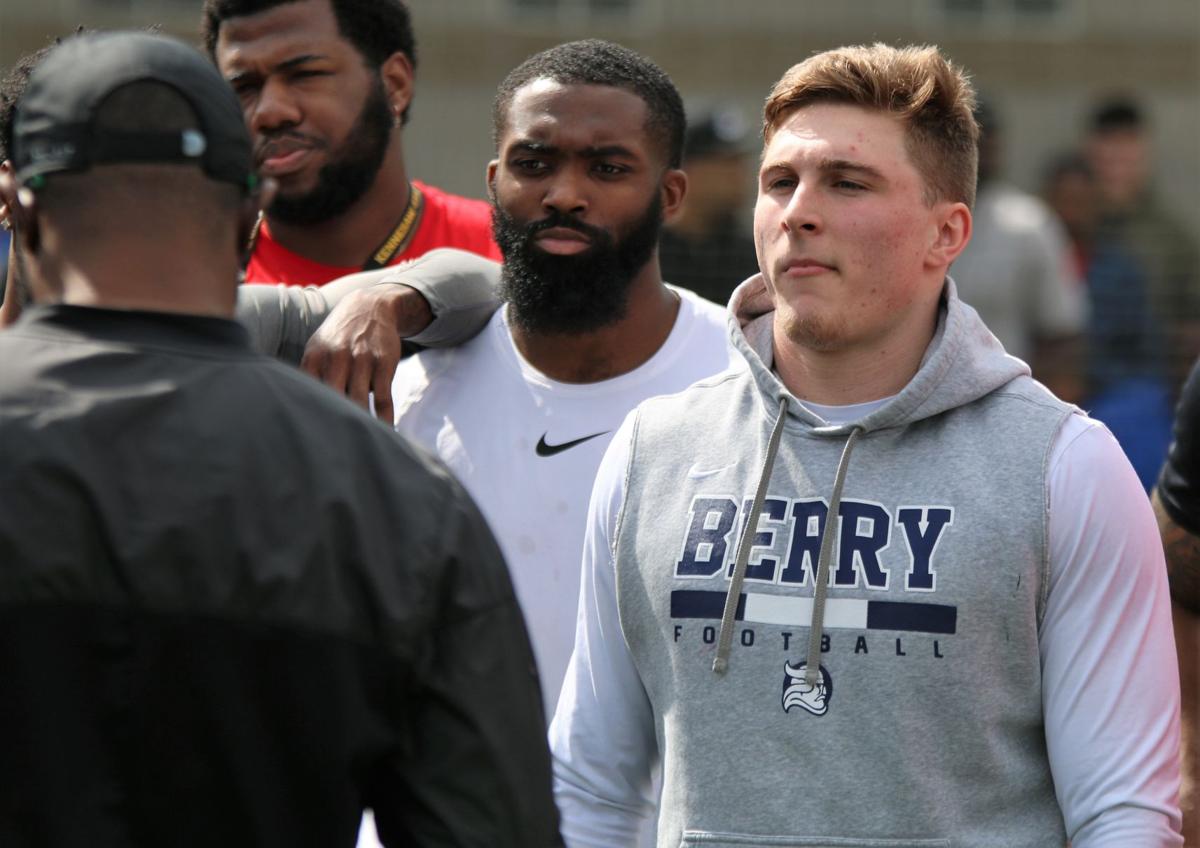 Former Berry wide receiver was one of more than 20 college football players who tried out in front of NFL scouts on Wednesday at Kennesaw State's Pro Day. 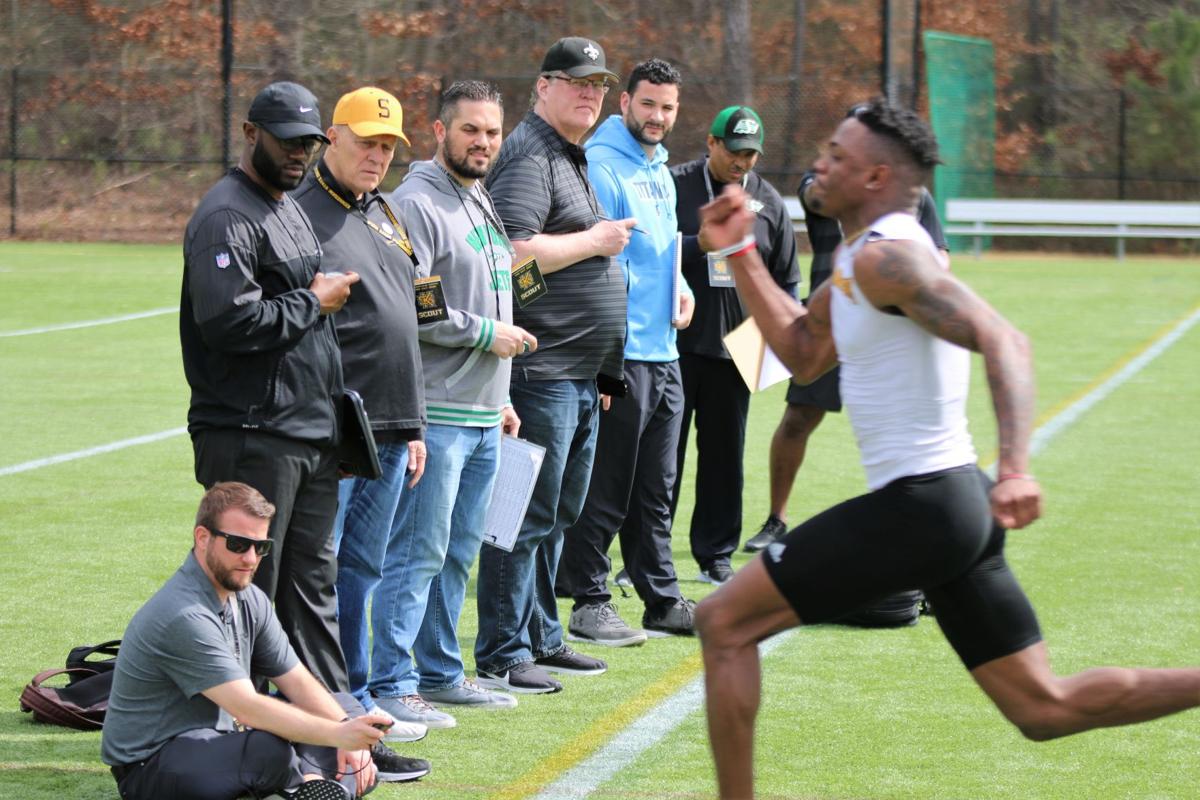 Mason Kinsey reaches out for a pass during a drill Wednesday as part of Kennesaw State’s Pro Day. The former Berry wide receiver was one of several football players working out for NFL scouts.

Former Berry wide receiver was one of more than 20 college football players who tried out in front of NFL scouts on Wednesday at Kennesaw State's Pro Day.

KENNESAW — Getting to play football in high school and college has given Desmond Johnson Jr. and Mason Kinsey plenty of good memories.

Their focus now is turning their experience and success on the field into a professional career, with Wednesday another step in getting to the next level.

More than 20 professional football teams, including some from the Canadian Football League, had scouts at Kennesaw State’s Pro Day on Wednesday as nearly 30 college football players were tested and drilled at the school’s intramural fields.

“It’s just a dream come true, man. I mean, I’ve been thinking about this since I was a kid,” Johnson said. “I just want to play football at the next level. What can I do to get better and reach my goal? And just for this day to come, it’s just an awesome feeling.”

Johnson, a former Rome High standout, was a key piece of Kennesaw State’s defensive line for four seasons. Kinsey, meanwhile, played his high school career at Demorest in Northeast Georgia, but found a home at Berry College, finishing as the Vikings’ most decorated wide receiver with 3,343 yards and 50 touchdowns.

Both men were kept after the initial workouts Wednesday and put through more specific drills as scouts ran them through their paces and touched base with them for the future.

“I feel like I came here and proved that I could check the boxes athletically. I didn’t run as fast of a 40 as I was used to, but that’s okay. The rest of my drills looked good,” Kinsey said. “The scouts didn’t seem too worried about my 40 time because they know when they turn on the tape that I play fast and I play quick. So that kind of answers itself because, at the end of the day, you’ve got to be able to play football.”

The 5-foot-11, 198-pound athlete proved his speed and agility during his four seasons at Berry where he was a three-time all-conference player and helped the Vikings win four straight Southern Athletic Association championships.

“It’s a blessing to be able to come out here and rep the ‘B’ on my chest and be in a place that a lot of people doubted that I would be at coming from where I come from, even in Habersham County and going to a Division-III school,” Kinsey said. “I enjoy being the underdog as far as that’s concerned. Pressure makes diamonds, and hopefully I get to shine a little bit later.”

Kennesaw State won back-to-back Big South championships in Johnson’s sophomore and junior seasons, with the 6-2, 230-pound lineman contributing to the Owls’ burst of success in its first four years of existence. Johnson had 41 tackles in his senior season, with 17 tackles for loss and seven sacks.

The pass rusher benched 13 reps and had a 4.95-second 40 in front of scouts from teams including the Saints, Steelers, Patriots, 49ers, Raiders and of course the hometown Falcons. He reached 27 inches on the vertical jump and had an 8.1-foot broad jump.

“I feel I did OK today. It’s not one of my best performances, but I feel like I got the job done,” Johnson said. “With the scouts, they just liked the way I dropped, liked my hands, liked how I broke down on the ball, stuff like that, just simple things.”

While Wednesday was a big part of both men’s journey to play professional football, it was not the end.

Kinsey said he has a local day with the Falcons coming up as well as a visit with the Jets and possibly the Colts. Johnson said his agent is working on getting him into the Falcons’ local day and a few more team tryouts in the coming weeks. The NFL Draft will be April 23-25 in Las Vegas, while the CFL Draft is set for April 30.

In the meantime, both are continuing to train and work on their football skills in hopes of getting their shot.

“I mean, the journey continues,” Johnson said. “I’m still gonna be training, trying to get everything I can get. Try to get better with my technique and perfect my craft.”