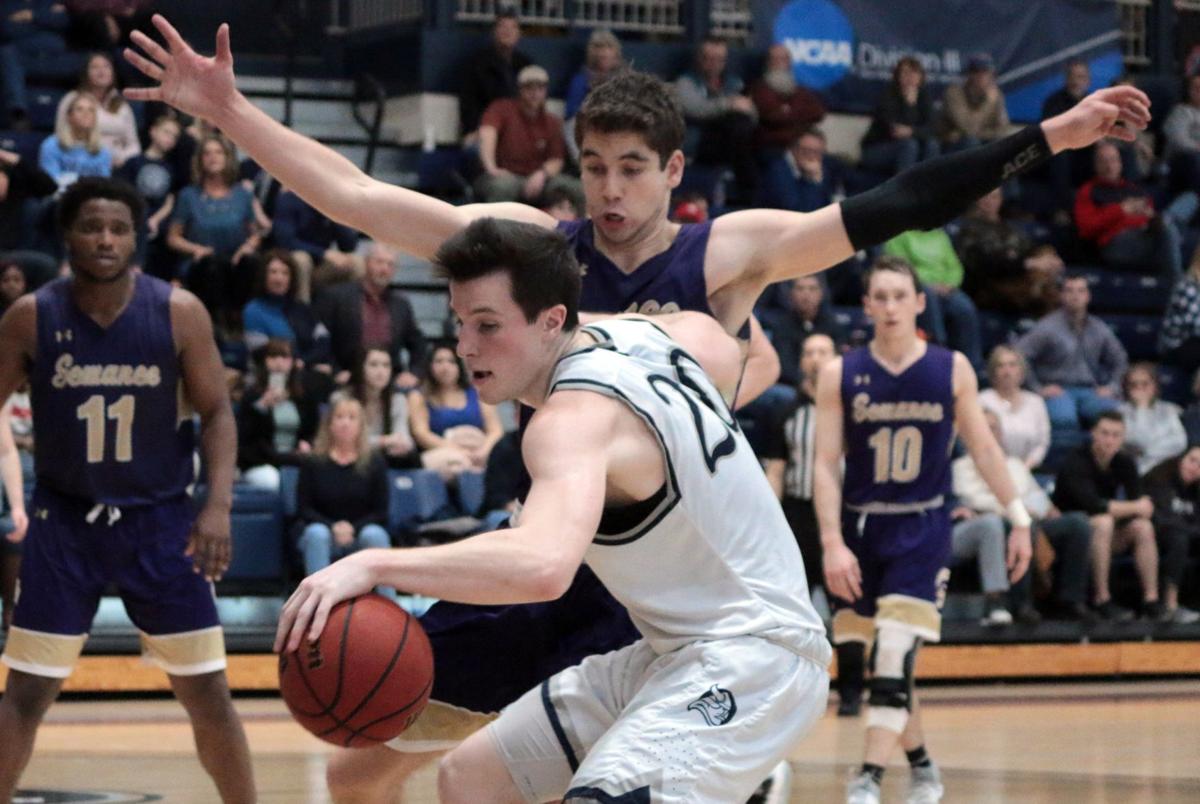 Berry’s Drew Jones (20) tries to maneuver around Sewanee’s Jordan Warlick during the second half of Sunday’s SAA quarterfinal game at the Cage Center. Berry won 77-50 to advance to the conference semifinals. 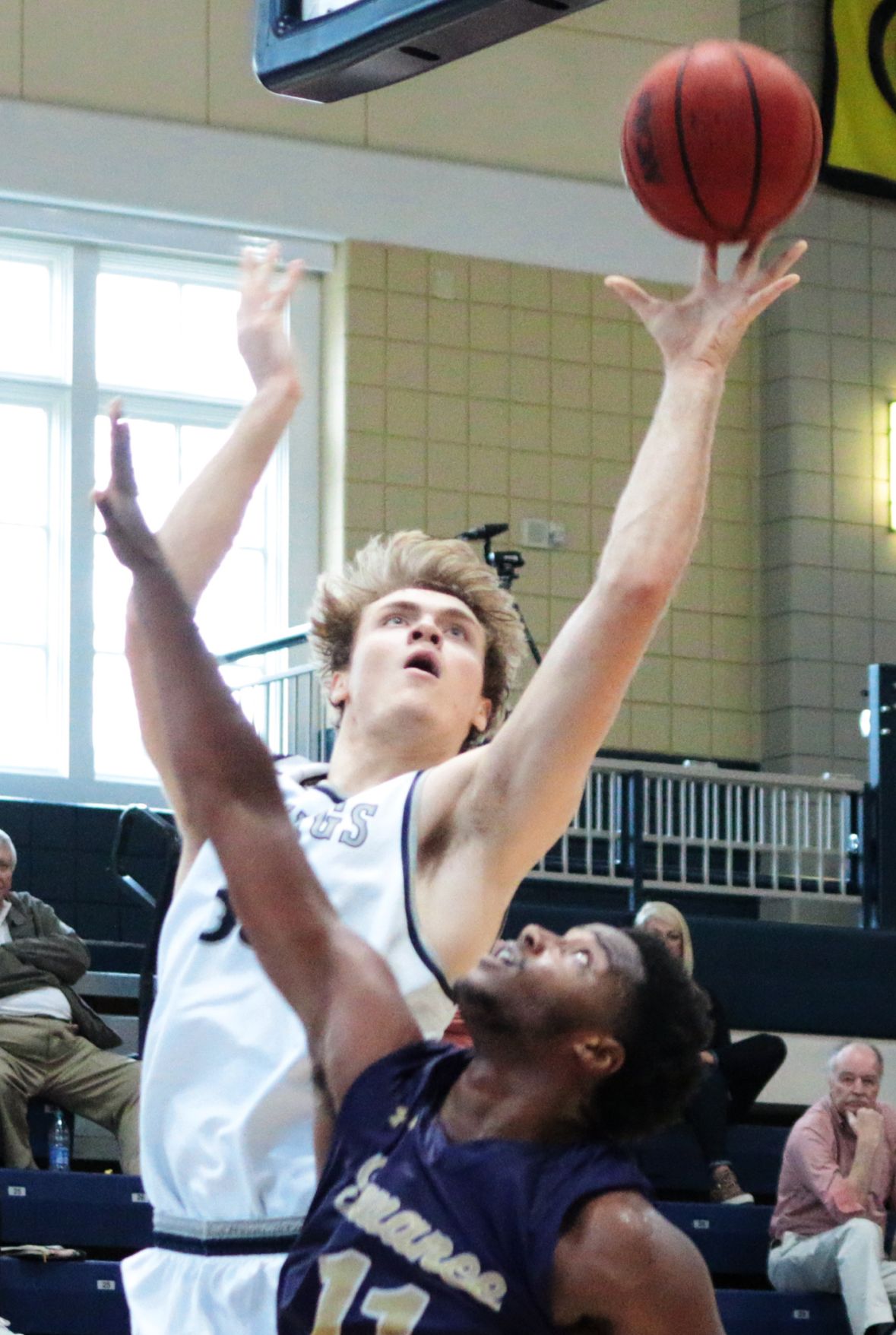 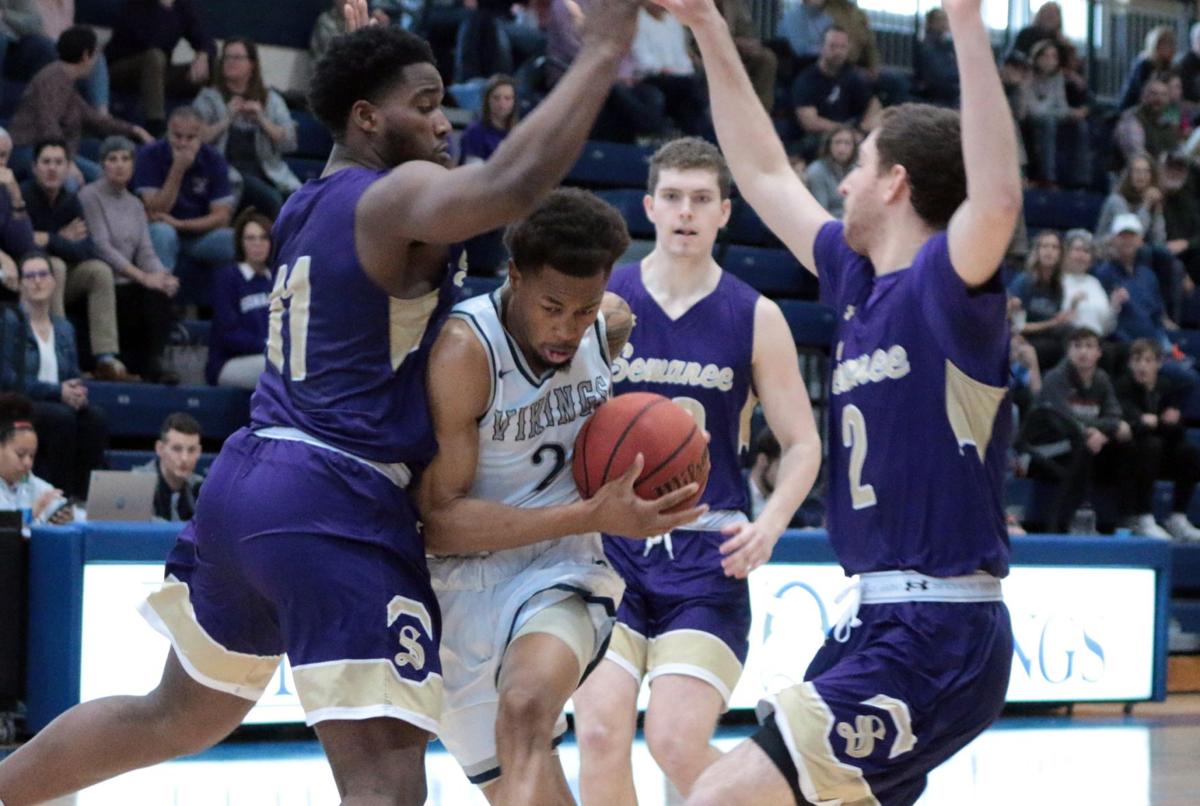 Berry’s Drew Jones (20) tries to maneuver around Sewanee’s Jordan Warlick during the second half of Sunday’s SAA quarterfinal game at the Cage Center. Berry won 77-50 to advance to the conference semifinals.

The tough losses suffered by the Berry men’s basketball team in the final two weeks of the regular season seemed like a distant memory on Sunday afternoon.

A dominant second half and a revenge win over a Southern Athletic Association rival in the first round of the conference tournament will tend to do that.

Junior forward Austin Brooks had his best performance as a Viking while shooting 11-of-11 from the field, and Berry stormed past Sewanee 77-50 in the quarterfinals of the SAA tournament at the Cage Center.

The game was the first SAA tournament game held in Berry’s home arena and puts the Vikings in the semifinals at Centre College in Danville, Kentucky, on Saturday against Hendrix.

“It’s really big for our program. I just told them when I envisioned coming here I envisioned hosting conference tournaments and having excited crowds for the postseason. And then with our team, just peaking in February, peaking at the right time. And I think you saw a group that’s really trending in the right direction and trying to become the best versions of themselves right now,” Cole said.

The Vikings took no chances of a repeat against the Tigers on Sunday as Berry took the lead with a 12-3 run in the first half and kept building from there. A 35-25 lead at halftime only got larger in the second half as Berry went on a 20-3 run over the span of 4:32 to go up 60-35 and cruise from there.

“I think they were just locked in all week at practice. We had some great practices, very competitive. We challenged them a couple of times to respond and they responded well,” Cole said. “We tried to put some pressure on them and make them have to deal with some difficult situations and so they accepted the challenge and then they kind of showed it tonight.”

Brooks, who transferred to Berry from Roane State prior to this season, finished with a game-high 24 points after coming off the bench to shoot 100% from the floor and go 2-for-3 at the line. He is the first player in the Vikings’ Division-III era to finish a game perfect from the field with a minimum of eight field goals.

“My teammates were looking for me. They were trying to get me open and they kept feeding me once I was hot. It’s all about the team, and how we do it. That’s the biggest part for me,” Brooks said.

DJ Estes was next for Berry with 17 points, including five 3-pointers, while Micah Johnson had 10 points. Rob Mbenoun came off the bench and hit three treys to help feed Berry’s momentum.

Sewanee (12-14) was plagued by missed shots and turnovers for much of the second half, and the Vikings took full advantage by shooting 64% in the final 20 minutes to Sewanee’s 35.7%.

“We knew we had to defend the three-point line, and they’re tough to guard because they’ve got shooters everywhere and then they’ve got a really good all-conference inside player. So we had to multitask a little bit and be able to deal with both three-pointers and attacking the rim,” Cole said. “We just knew our assignments and the guys really studied their scouting reports and did a great job.”

Berry’s women’s basketball team saw its season come to a close on Sunday afternoon, falling to Centre College 64-53 on the road in the SAA quarterfinals.

The Vikings (12-14) trailed by five at the break made it a one-possession game heading into the fourth quarter before Centre put up 20 points in the final period to secure its trip to the SAA semifinals.