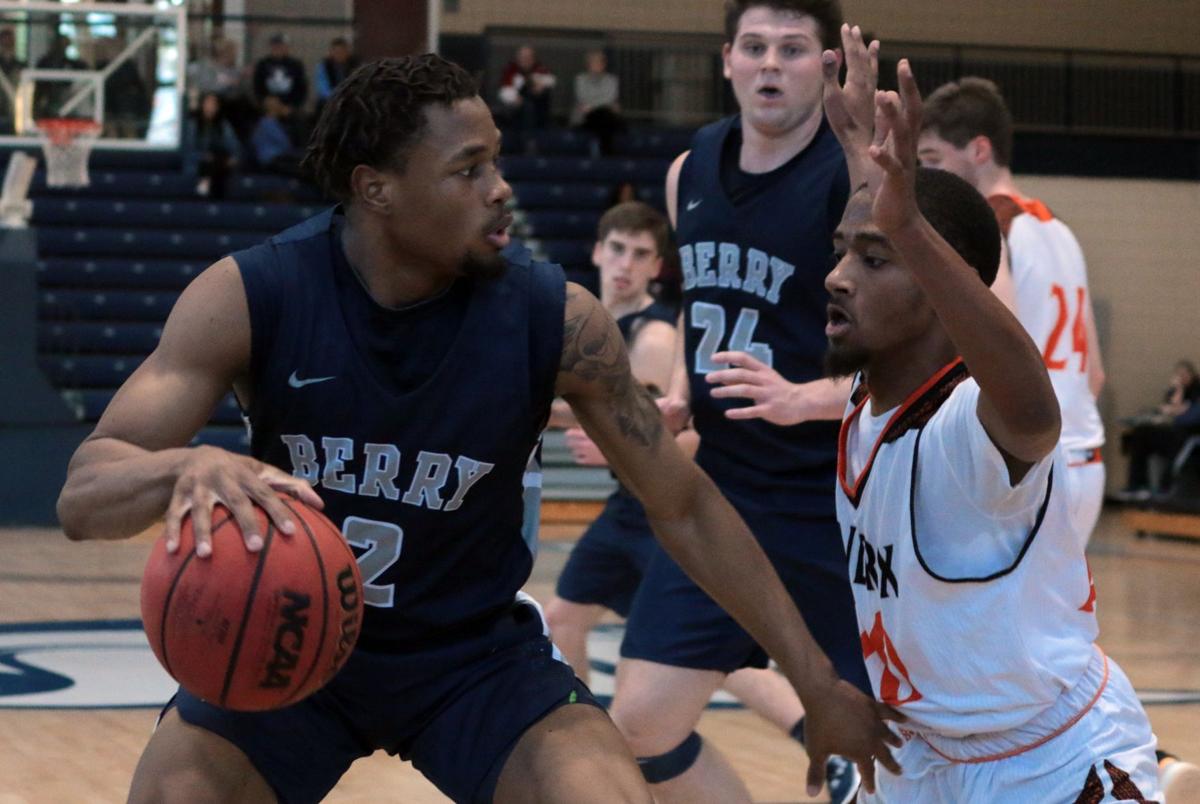 Berry’s Micah Johnson (left) tries to push inside against Hendrix’s Rod Cummings during the first half of Sunday’s Southern Athletic Association game at the Cage Center. Berry lost 60-59 in overtime. 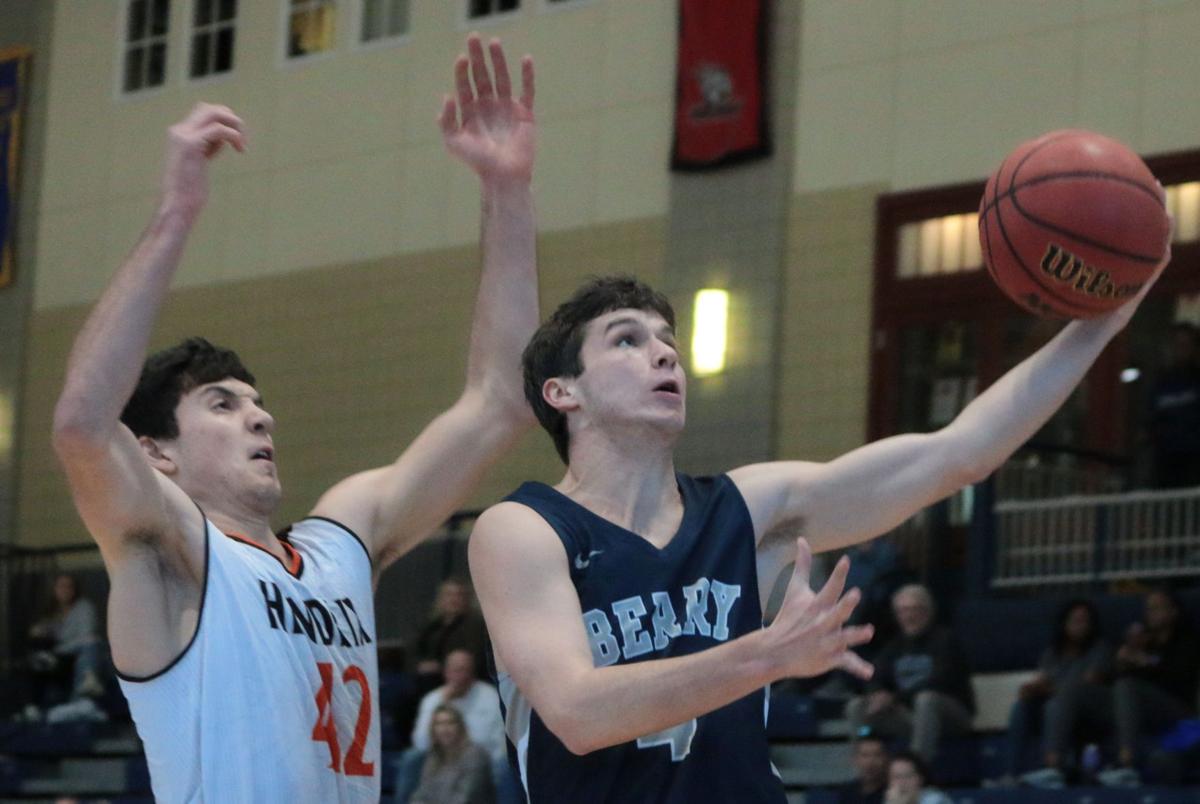 Berry’s Dawson Wehunt (right) lays up the ball for a shot ahead of Hendrix’s Carl Fitch during Sunday’s game at the Cage Center. 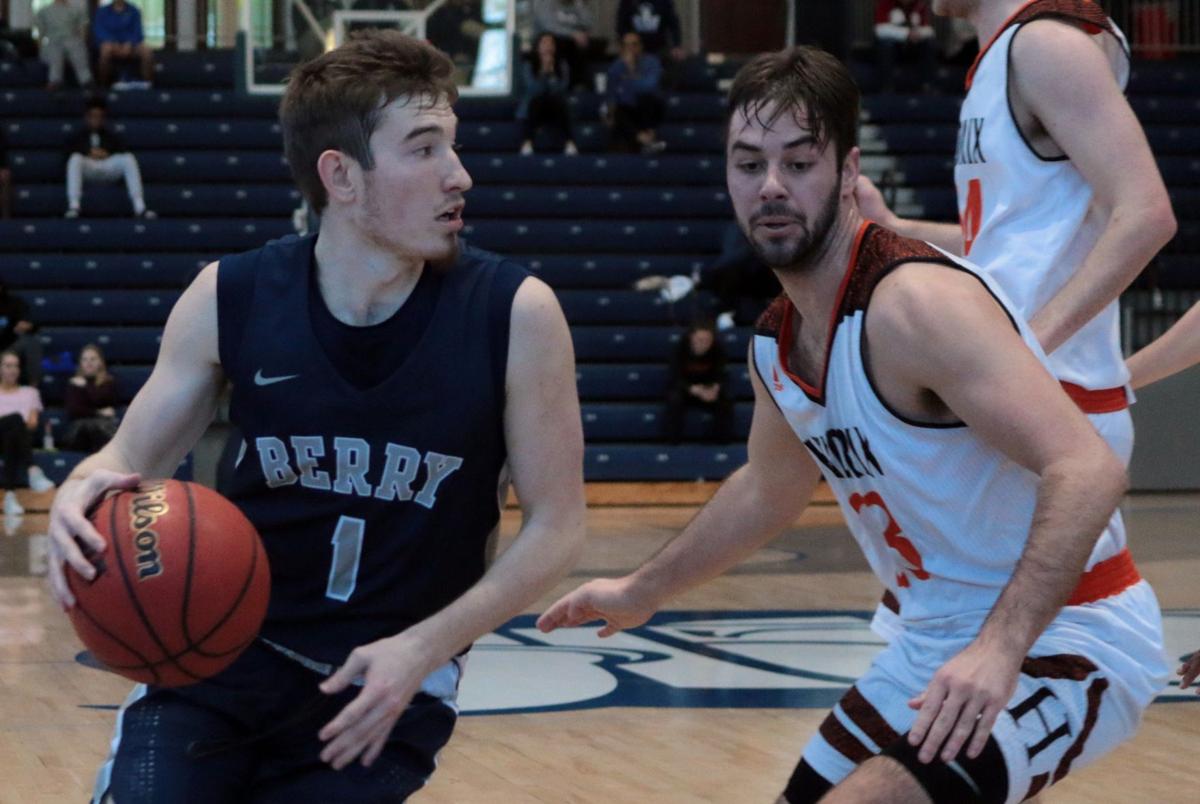 Berry’s Collin Sowada (1) dribbles to the inside against Hendrix’s Jacob Link during Sunday’s game at the Cage Center.

Berry’s Micah Johnson (left) tries to push inside against Hendrix’s Rod Cummings during the first half of Sunday’s Southern Athletic Association game at the Cage Center. Berry lost 60-59 in overtime.

Berry’s Dawson Wehunt (right) lays up the ball for a shot ahead of Hendrix’s Carl Fitch during Sunday’s game at the Cage Center.

Berry’s Collin Sowada (1) dribbles to the inside against Hendrix’s Jacob Link during Sunday’s game at the Cage Center.

Not knowing when a streak is going to begin or end is part of the intriguing mystery of sports.

It took two halves and overtime on Sunday, but the Berry College men saw their early season stretch of victories come to a close as Hendrix outlasted the Vikings 60-59 in a Southern Athletic Association tilt at the Cage Center.

Berry had won eight in a row prior to the loss, including earning a 2-0 mark in conference play, but were hampered by the visiting Warriors’ defense and early shooting struggles.

The Vikings went up 59-56 with 2:21 left in overtime after junior Micah Johnson made back-to-back shots. But Berry would be held scoreless the rest of the way, and Hendrix got a boost from completing a 3-point play with a free throw and hit the first of two foul shots with 1.6 seconds left to complete the win.

“It was a good defensive game,” Berry coach Mitch Cole said. “Both teams kind of knew each other’s tendencies pretty well. You know, we just came up short at the end. Didn’t quite make the plays we needed to make to close the game out after having the lead there late in the overtime. You’ve just got to learn from it and move on.”

Hendrix (8-6, 2-1) then made its biggest move of the second half by putting together an 8-0 stretch to retake the lead. Viking Drew Jones completed a layup with eight seconds left to make it 51-51 and neither team would make another shot before the buzzer.

“Well we talk about this every day that one of our weaknesses is communication, and our communication broke down late in the game a couple of times where we didn’t switch or we didn’t cover a play that we knew was coming,” Cole said. “So it’s important for our players to learn from a close game, where we made mistakes, not to let it happen again and to do it every day in practice.”

Johnson finished with a season-high 28 points and tagged that up with 12 rebounds for the double-double. His 18 second half points were key for the Vikings to push Hendrix into overtime, but the Tifton native had a pair of missed free throws late in the extra period.

“He’s good. He plays with emotion and plays hard. He really tried to battle back and make up for some mistakes in the first half,” Cole said. “I thought he brought us back in the game and really played well, just a couple of mistakes late. But for the most part he played his heart out, so we’re proud of him and the rest of the guys.”

Caleb Haynes was next in scoring for Berry with eight points and 11 rebounds.

The Vikings had few opportunities to try and make up ground from the free throw line in the first half, going 1-of-7 in the first half. They were 26.7% from the floor and 12.5% from behind the arc during that time. Berry finished the game 9-of-18 from the line while Hendrix was 20-of-28.

Berry will try to kick start another streak Friday as they play Center on the road in Danville, Kentucky.