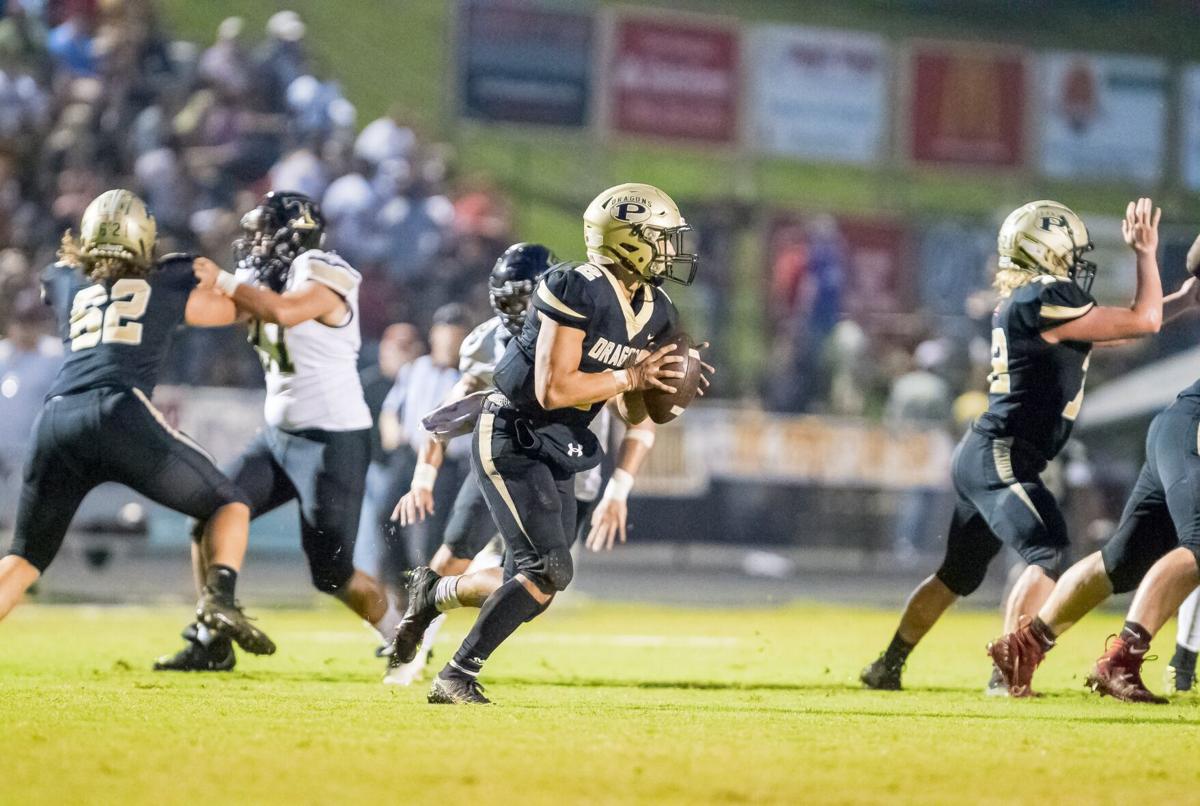 Pepperell quarterback Matthew Waddell rolls out behind his offensive line during a game against Temple earlier this season. 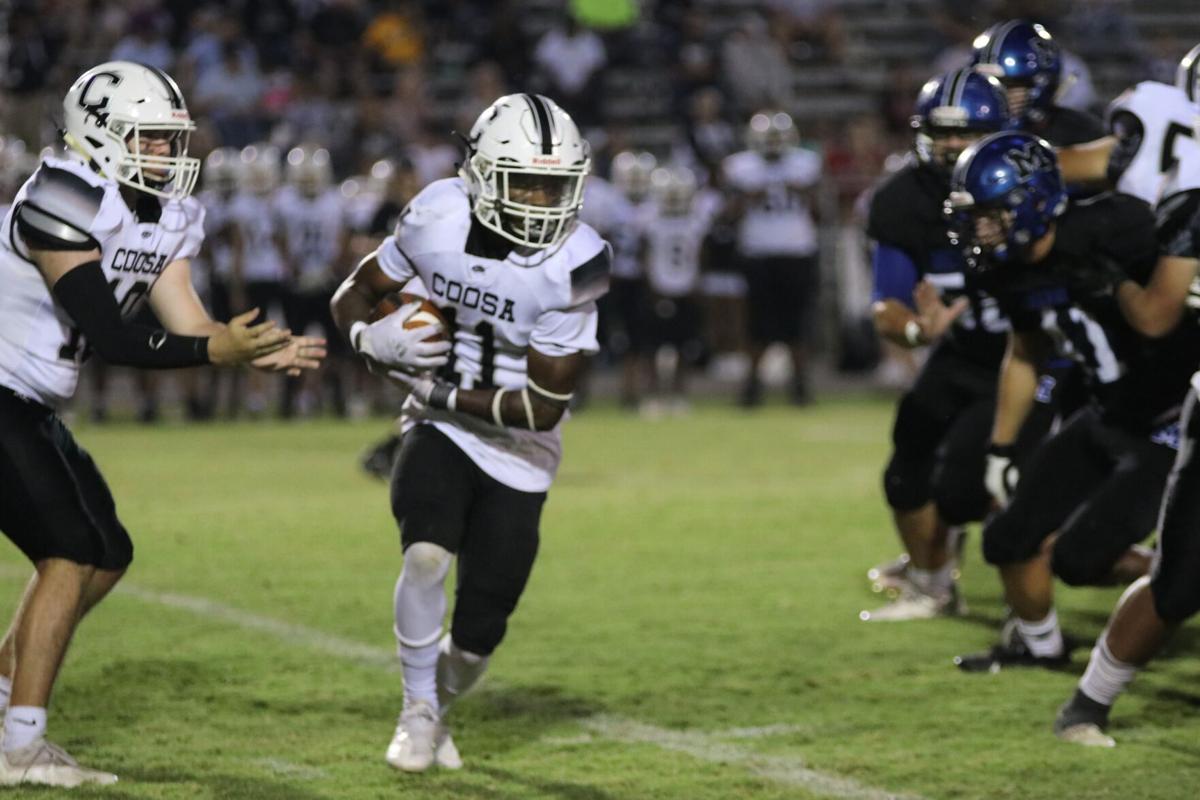 Pepperell quarterback Matthew Waddell rolls out behind his offensive line during a game against Temple earlier this season.

The season has passed the midway point, and that means that each game takes on more and more importance as the opportunities at wins become fewer for the local teams.

It will be a full schedule on the local front on Friday with teams from the area either trying to defend their home field or come away as road winners in crucial matchups.

Here is a look at each of the games on Friday night and what to expect:

Outlook: The Dragons haven’t gotten off to the start they wanted to in Region 7-AA play, but they will look to turn that around on Friday when they are back home at Dragon Stadium for the first time since Sept. 17. They need a win to get their State playoff hopes back up and running, and their opponent this week gives them a great chance to do that. Gordon Central comes to Lindale in the midst of a winless 2021 so far as they have struggled to get anything positive going on either side of the ball just past the midway point of the season. The Dragons have lost a heartbreaker to Dade County and a game at Fannin County last week that was closer than the score indicated so they are plenty ready and motivated to put on a complete performance in front of their home fans. Expect the impressive Pepperell running game to have a big night, which means a lot of points scored and a lot of cannon blasts. Dragons get back on track in a big way.

Outlook: It’s been a struggle for Coosa over the first couple months of the season as it seems that every break has gone against them. They’ve played some pretty good competition as well. That doesn’t change this week as they welcome a Chattooga squad that has made a complete turnaround following an 0-2 start to the schedule with three straight wins, including two convincing victories in 7-AA play. The Indians have some speedy, big-play capable players in their backfield in quarterback Nic Hester and running back Lashaun Lester that the Eagles must find a way to contain or it could be another impressive night for Chattooga’s offense that has scored a combined 145 points in the last three weeks. Coosa has been hampered by turnovers during their string of losses in the first half of the season. That is an area that has to turn around if they want to stack up a few wins on the back half of the schedule and have any chance of competing for a spot in the postseason. Unfortunately for the home team, it looks like Chattooga is showing any signs of slowing down this week.

Outlook: Rome has been rolling the past couple weeks as they have put together dominant home wins over Carrollton and Rome to get right back in the hunt in the Region 5-AAAAAA title race. The Wolves’ offense has been clicking with Bryson Hill becoming a touchdown machine in the running game, and quarterback Reece Fountain distributing the ball well to his many talented targets in the passing game. Many will look at the records of these two teams and assume it will be another easy night for Rome, but East Paulding is not a pushover. They have some good players led by running back Justin Williams, a West Virginia commit who has put up some big numbers and big plays to this point in 2021. He will be the Rome defense’s No. 1 priority on Friday, no doubt. This game might be a little closer than the Rome coaches and fans might want it to be, but eventually, the overall talent and depth of the Wolves will allow them to pull away in the second half and keep their momentum in the region going.

Outlook: Darlington will finally open their region schedule this week after a long and challenging non-region slate to open the season. The Tigers were tested over the past few weeks and have passed all those tests as they have now won five straight since their season-opening loss to Whitefield Academy. The importance of playing well increases from this point on, however, as Darlington has their sights set on a region title. That conquest begins this week when they travel to Mt. Paran Christian in a matchup of private schools that have had plenty of success in the past several years. The series between the two teams have featured some extremely tight ballgames over the past decade with the largest margin of victory by either team being three points. But the way the Tigers have been playing lately, that could change this Friday. Darlington’s best players are playing their best football right now, and that isn’t good news for Mt. Paran Christian.

Outlook: Model evened their region record last Friday with a win over Floyd County rival Coosa, but the opposition gets tougher and the trip gets longer this week as the Devils travel to far northwest Georgia to battle Dade County. The Wolverines are much-improved from last season and coming off big wins the last two weeks over Pepperell in their region opener and over traditionally-strong South Pittsburg (Tenn.) in non-region action. The Wolverines’ offense is led by Cayden Cooper, a senior running back, who has been able to gain yardage in chunks behind a strong offensive line. A young Model team has shown noticeable improvement as they have gained experience in the last few weeks, but they need an almost-perfect effort this Friday to pull off what almost everyone in the region would consider an upset. Devils battle to keep it close but fall just short.

Outlook: The start of the region schedule brought Armuchee their first loss of the season last Friday when they couldn’t quite keep up in the fourth quarter vs. Mt. Zion. The Indians will look to bounce back with a trip to Atlanta this Friday as they take on BEST Academy at Lakewood Stadium. A win would definitely keep the Indians’ State playoff hopes alive, and they should be considered the favorite against a struggling Eagles’ team. Armuchee’s offense continues to produce under the direction of quarterback Chandler Desanto, who has gotten more comfortable as a passer and rusher as his junior season rolls on. The opportunity for big plays will be there this week against a BEST Academy defense that has allowed 40 or more points three times so far in 2021. Expect the Indians to come away victorious on Friday and have a happy trip back home from Atlanta.

Outlook: The Lions are coming off a tough loss last week at Johnson Ferry Christian Academy so they will be more than ready to get back on the field and get that bad taste out of their mouths. These teams have similar records and similar results against common opponents. This game could come down to the final few minutes.