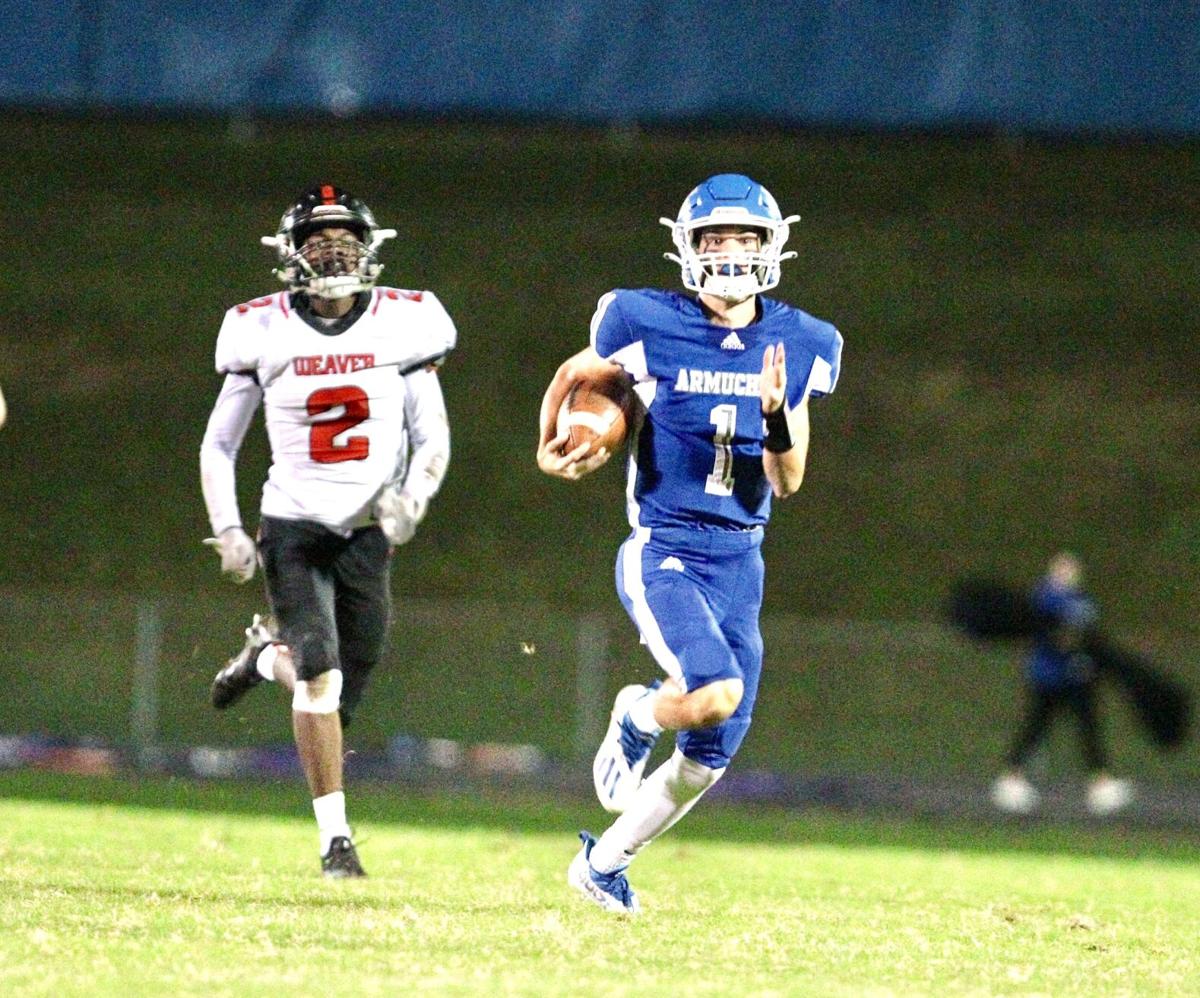 Armuchee’s Chandler Desanto (1) sprints past Weaver defender Kohl Perry on a touchdown run in the second quarter on Friday. 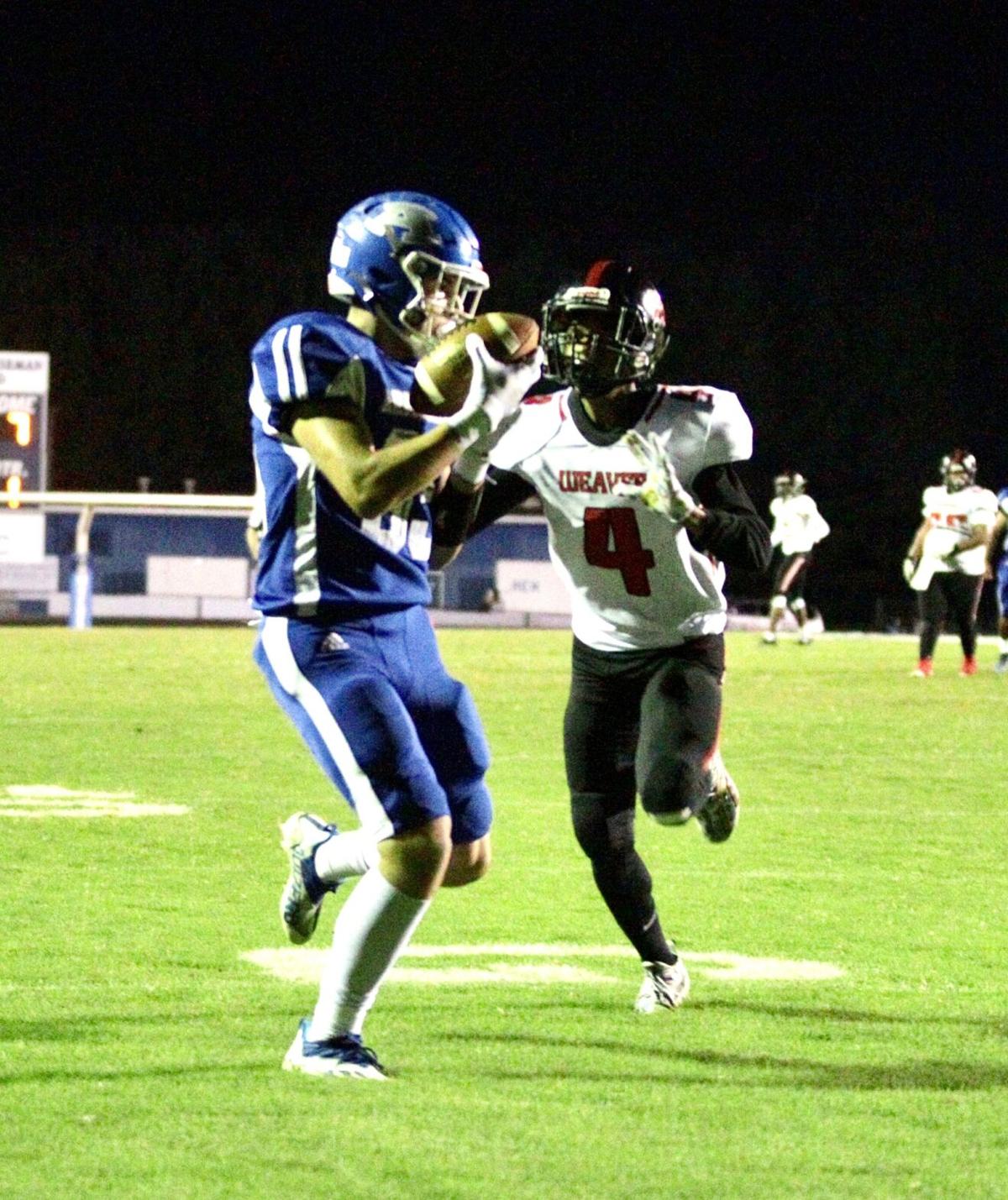 Armuchee’s Malik Drinik (left) pulls in a touchdown catch over Weaver’s Keshawn Allen in the first quarter on Friday. 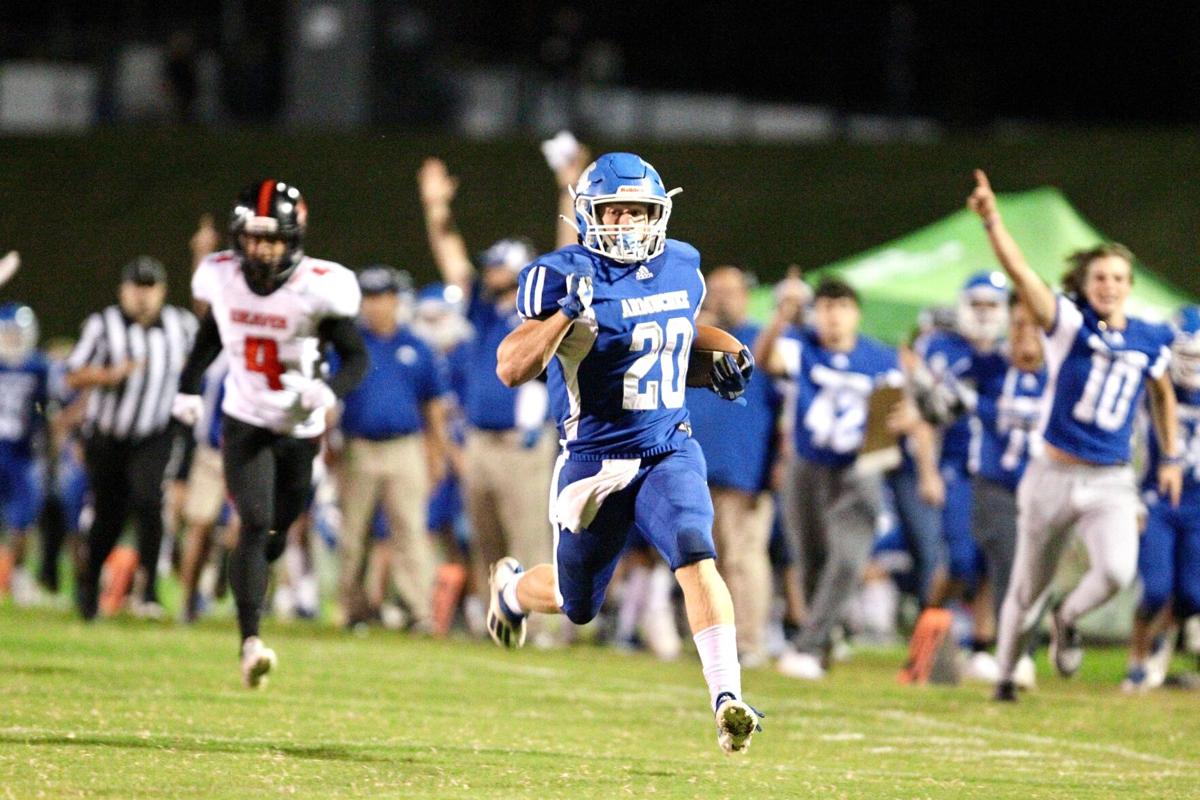 Armuchee’s Alex Wright (20) pulls away from the Weaver defense for a touchdown run while his teammates celebrate on the sideline.

Armuchee’s Chandler Desanto (1) sprints past Weaver defender Kohl Perry on a touchdown run in the second quarter on Friday.

Armuchee’s Malik Drinik (left) pulls in a touchdown catch over Weaver’s Keshawn Allen in the first quarter on Friday.

Armuchee’s Alex Wright (20) pulls away from the Weaver defense for a touchdown run while his teammates celebrate on the sideline.

A huge night from quarterback Chandler Desanto and five turnovers forced by their defense was the recipe for a great night at Armuchee as the Indians rolled past Weaver (Ala.) for a 45-7 victory and a 4-0 start to the season.

Desanto racked up 138 yard and two touchdowns on just four carries and added 126 yards on 6-of-11 throws and two touchdowns in the passing game to lead the Indians offense while the Armuchee defense continued its opportunistic streak in the early season with four interceptions and a fumble recovery to shut down the visiting Bearcats.

“I’m really proud of (Chandler),” said Armuchee head coach Jeremy Green. “He has really grown up as a player and a leader. He started half of his freshman year and his sophomore year so this is really his first season as a true upperclassman, experienced quarterback. We ask our quarterback to do a lot in our offense, and he has done a great job like he did tonight.

“With our defense, we’ve got some football smart, talented players. I’m so happy with the way they play and are able to be in the right place and force turnovers. We didn’t have any interceptions last year in eight games, and now I think we have nine in our first four this year.”

The Indians (4-0) got started early on offense with a long drive that culminated with a three-yard touchdown run by Ryland Steen with 4:32 left in the first quarter and then followed that up with another score on a 32-yard touchdown pass from Desanto to Malik Drinik a couple minutes later to make it 14-0.

After Weaver scored their lone touchdown of the game early in the second quarter on a 40-yard pass from Kaden Gooden to Jayden Sturkie, the Indians’ ground game showed up in a big way as Alex Wright took one around the corner and went 54 yards for a rushing touchdown at the 9:44 mark of the second quarter and Desanto took a snap and streaked 69 yards to the end zone in the final minutes of the half to put his team up 28-7.

Armuchee continued to add points in the third thanks to a 29-yard field goal by Grayson Perry, who also went 6-for-6 on extra points for the night, and that was followed by Desanto finding the end zone again on a 10-yard touchdown run in the final minute of the third to put the Indians up 38-7.

Armuchee wasn’t finished yet, however, as Desanto connected with JJ House on a 21-yard touchdown pass early in the fourth quarter to close out the scoring. House finished with three catches for 88 yards.

Along with Desanto’s big night on the ground, Wright added 62 yards on 13 carries with the touchdown.

Defensive standouts for the Indians were Steen who had an interception and a fumble recovery along with Jacob Seagraves, Riley Ross and Jackson Coonley who also pulled down interceptions in the dominant effort.

Armuchee will open their Region 6-A Public schedule next week when they host Mt. Zion at 7:30 p.m. Green said while his team should enjoy the 4-0 start, it’s time to turn their focus to what’s ahead of them rather than what they’ve done to this point.

“It’s big for us to be 4-0, but I told the kids that come Monday we are back to 0-0,” said Green. “They aren’t going to give out patches for your letterman’s jacket for 4-0. I told them I don’t care about how good a team we are right now, I care about how good we can be. This kind of start should make you love the game and want more, but it shouldn’t make you feel like you’ve accomplished everything yet. We need to come to work Monday because our region is really good and that starts with a very good Mt. Zion team next Friday.”