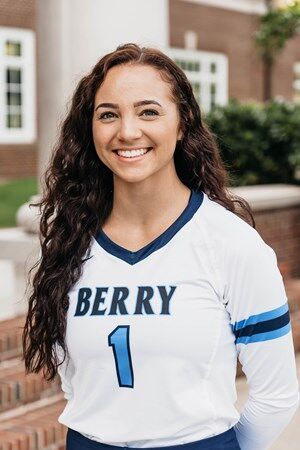 Senior Laura Beier continues to be Berry’s defensive anchor, keeping them in-system and leading the Vikings to three victories last weekend, which in turn has resulted in another Southern Athletic Association honor when for the second time this season the libero earned SAA Defensive Player of the Week recognition on Monday.

During the Vikings three straight road wins Friday, Saturday and Sunday over respective opponents Transylvania, Centre and Sewanee, Beier led all players in total digs. On the weekend she posted 63 total digs, 5.93 digs/set. Additionally she added six aces on the weekend.

The standout also surpassed the 1,000-career dig mark, and for the season had 224 digs, averaging 6.79 digs per set and added 15 aces on the season.

In 2019, Beier was an AVCA Third Team All-American after leading the SAA with 5.80 digs per set and 609 total digs during the regular season and set a program record with 701 total digs on the year, and as freshman in 2018, she was an AVCA All-America Honorable Mention pick.

The Vikings, now 10-1 overall and 4-1 in the SAA, are back home at the Cage this weekend when they host SAA foes Hendrix on Saturday at noon and Rhodes on Sunday at noon at the Cage.

The Vikings, who have won six of their last seven games, improved their overall record to 6-3 heading back into Southern Athletic Conference action this weekend when they visit Centre in Danville, Ky., on Saturday and Rhodes on Sunday.

Against Huntingdon, Berry and the host Hawks battled to a scoreless tie in the first half and remained deadlock until the 68:28 mark in the second half when freshman Haylee Stephens scored her first her first career goal on an unassisted shot.

That tally wound up as the difference as the Berry defense kept Huntingdon in check, with Viking goalkeeper Maggie Jones recording four saves.

For the second time in less than a month, Berry soccer player Nathan Carlson has earned his second Southern Athletic Association honor when the sophomore forward was named the SAA Offensive Player of the Week on Monday.

In the Vikings’ SAA opener on Saturday when Berry blanked Sewanee 3-0, Carlson tallied two goals and an assist. He scored them on just three total shots, putting both of them on target, and also earned the game-winning goal on his first.

An All-SAA First Team selection in the spring, Carlson – he was this season’s first Player of the Week pick on Sept.7 – is off to a torrid start this fall, having scored six goals and handed out four assists to help the Vikings break out to a 6-2 overall record.

The team is back in action this Saturday Oct. 2 when the Vikings travel to Danville, Ky., to face conference foe Centre.

The Berry men’s golf team closed out play in a stacked field of 31 NCAA Division III programs finishing in a tie for ninth place Monday at the Royal Lakes Invitational held at the Royal Lakes Golf and Country Club in Flowery Branch, Ga.

The Vikings ended the 36-hole tourney at 607. Babson College claimed the title with an impressive 13-under par 563.

Seth Jolly headed up Berry’s effort at the par72 course finishing 11th overall shooting rounds of 73 and 72 for a 1-over 145.

The Vikings are back in action Oct. 17-18 when they play in the Golfweek Fall Invitational in Sandestin, Fla.

The Lady Hawks struggled on the first nine of day one, but rallied and ended with three scores in the 70’s. Their total score for day one was 315(+27) led by Sophomore, Paola Rosario. The Hawks were strong on the second day of the Savannah Lakes Fall Invitational with all four scores below 80 and a total score of 303. The day 2 performance moved the team up to 11th on the leaderboard, which was four spots better than the first day. There were 19 teams competing at this event.

Women’s Golf competes next in Lincoln Memorial’s fall tournament at Jekyll Island on Oct 18 and 19.

ROME – The Shorter volleyball team (9-4) defeated Union University (8-6) 3-0 on Saturday at home. After their first three home matches this week, the Lady Hawks remain undefeated on their home court.

Emma Richardson led the way for the Lady Hawks offensively and had 11 kills. Jade Smith had nine kills while Emily Crocker had eight. Annie Smith had 24 assists for Shorter. Madison Sprosty added in 18 digs while Lacee Glover added in 16.

The Lady Hawks return to action on Friday, October 1 against Lee University. The match is slated to start at 6 p.m. in the Winthrop-King Centre.

The long weekend that included three bus rides to three different cities came to an end Sunday afternoon, and the last stop for the Berry volleyball team resulted in the same outcome – a victory.

After downing non-conference foe Transylvania in Lexington, Ky., on Friday night and securing a Southern Athletic Association victory in Danville, Ky., over Centre on Saturday, the Vikings’ last stop in Tennessee proved to just as successful when they downed the Sewanee Tigers 3-0 for another SAA win.

As was the case throughout the weekend, the Vikings came up with the offense and defense to earn the win.

Providing Berry with the attack at the net included Jazzy Innis, who led the team with 12 kills, while Molly Bergin added nine and setter Emily Rapach had five.

Laura Beier came up with 15 digs for the Vikings and Emily Rapach recorded 30 assists.

This weekend the team returns to their home court at the Cage when they take on Hendrix on Saturday and Rhodes on Sunday for a pair of SAA tests.