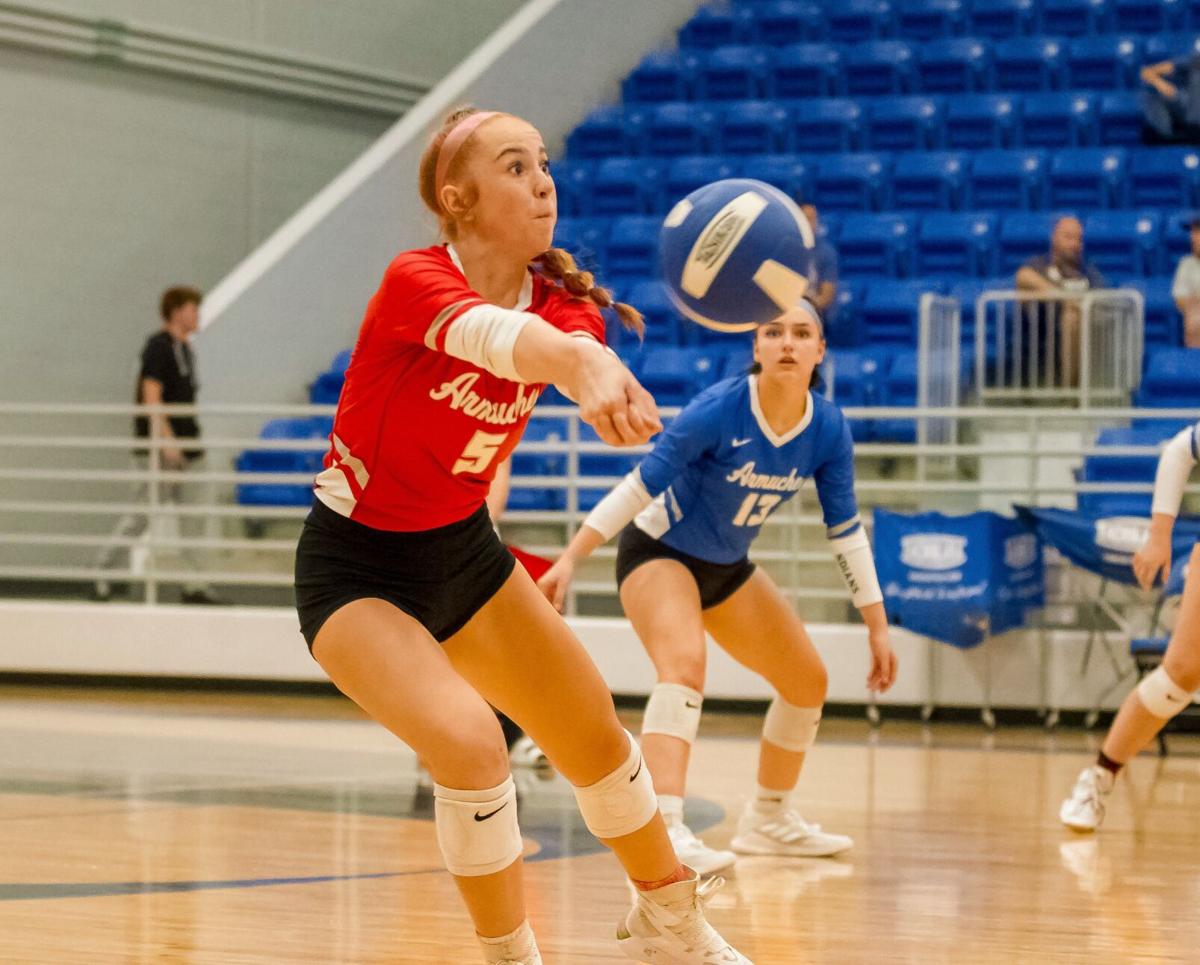 Armuchee’s Kyleigh Powell stretches for a dig during Thursday’s match against Cherokee County. 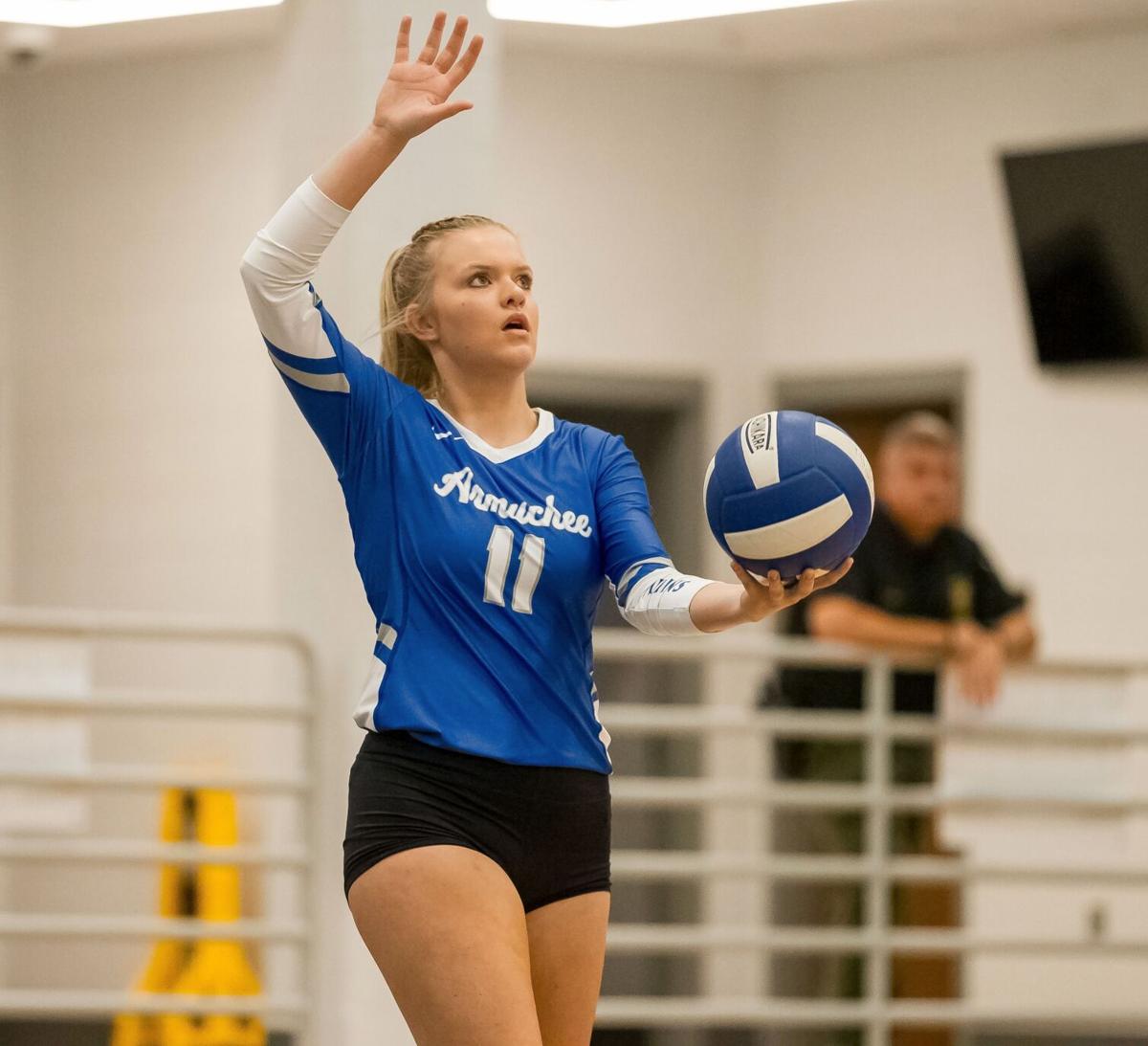 Armuchee's Bailey Tomlin prepares to serve during the second set of Thursday's match vs. Cherokee County.

Armuchee’s Kyleigh Powell stretches for a dig during Thursday’s match against Cherokee County.

Armuchee's Bailey Tomlin prepares to serve during the second set of Thursday's match vs. Cherokee County.

Armuchee faced some tough stretches during Thursday’s home match against Cherokee County (Ala.), but each time the Lady Indians faced adversity, they dug deep to put together a run that resulted in a three-set victory.

The Lady Indians (20-2) found themselves on the short end of the scoreboard both in the first set and the third set against the visiting Lady Warriors but bounced back to finish strong in each. Armuchee won the best-of-five match in three straight sets by 25-15, 25-8 and 25-13 scores.

In the third set, for example, the Lady Indians trailed 11-9 before reeling off a 16-2 run to clinch the match. Head coach Clint Decker said that kind of effort is just an extension of what the team has made their rallying cry this season.

“Our motto has been ‘this point,’” said Decker. “We are not playing based on the score or the crowd or anything else. It doesn’t matter if we are up or down, we’ve preached ‘this point.’ The girls played like that tonight. They fought through some times when we weren’t making the plays or getting the breaks. The girls are starting to develop that mindset to focus on one point at a time, and that is showing on the court.”

The victory kept Armuchee’s recent impressive surge going as they have now won 13 matches in a row and sit at 20 wins for the year with several more matches left on the schedule.

“We reached 20 wins today which is always big ... it’s five short of our single-season record, and we have 12 matches to go,” said Decker. “We feel confident that we can win a lot more this year. It was a bonus to be on our home floor tonight. It’s always exciting for the girls to play at home.”

The win on Thursday comes after a 4-0 slate earlier in the week as they defeated Oakwood Christian Academy and Cass on Monday at home and followed that up with two huge wins on Tuesday as they opened up Area 6-A/AA Public play with wins on the road over Callaway and Bremen.

“The Bremen match was a big victory,” said Decker. “We had beaten them twice last year and then lost to them in the region championship game. Our girls were determined to not lost that one on Tuesday. I was extremely proud of them for having to make such a long trip on a school night to Callaway, which is two-plus hours away, be focused enough and bringing high energy to allow us to come away 2-0 on the night in area play.”

Armuchee will continue area play on Tuesday when they travel to Model for a doubleheader against Coosa and Model starting at 5 p.m.

Even with the recent success and momentum, Decker said his team is still aiming to improve and play at a higher level.

“We are still working on serving and trying to get our serves in so we do not give away points,” said Decker. “High-level teams get their serves in. We’re also making a few tweaks to our defense as we look down the road at what we’re going to face. We put in a new defense tonight, not specifically for Cherokee, but for what we might need to use in a match in the future.”

In other recent prep volleyball action:

The Model Lady Devils got their Area 6 A/AA Public) schedule off to a great start on Tuesday went on the road to Temple and swept Pepperell and the host Lady Tigers to open area play 2-0.

“We’ve had a little bit of a rollercoaster season so far,” said Model head coach Kendall Roberts. “Lots of ups downs. After competing in the Battle of the Counties over the weekend, we had a long talk about the importance of limiting our errors on our side of the floor. We played Unity (on Monday), and we were able to work on those things. Tonight the girls came out and did the little things on our side of the court. With only one Senior, we have a young team with a lot of talent. We just have to all get in sync with one another and control our mistakes. I am proud of how the girls stepped on the floor and played tonight. All players were able to contribute to the wins.”

Leading the stats for the Lady Devils on Tuesday were Larsen Johnson with nine kills, Halle Williams with seven kills, Tinley Sprayberry with 10 assists and three aces, Rachel Burkhalter with seven assists and two aces and Morgan Wood with seven digs.

Model will be back at home on Tuesday when they host an area tri-match against Armuchee and Coosa starting at 5 p.m.