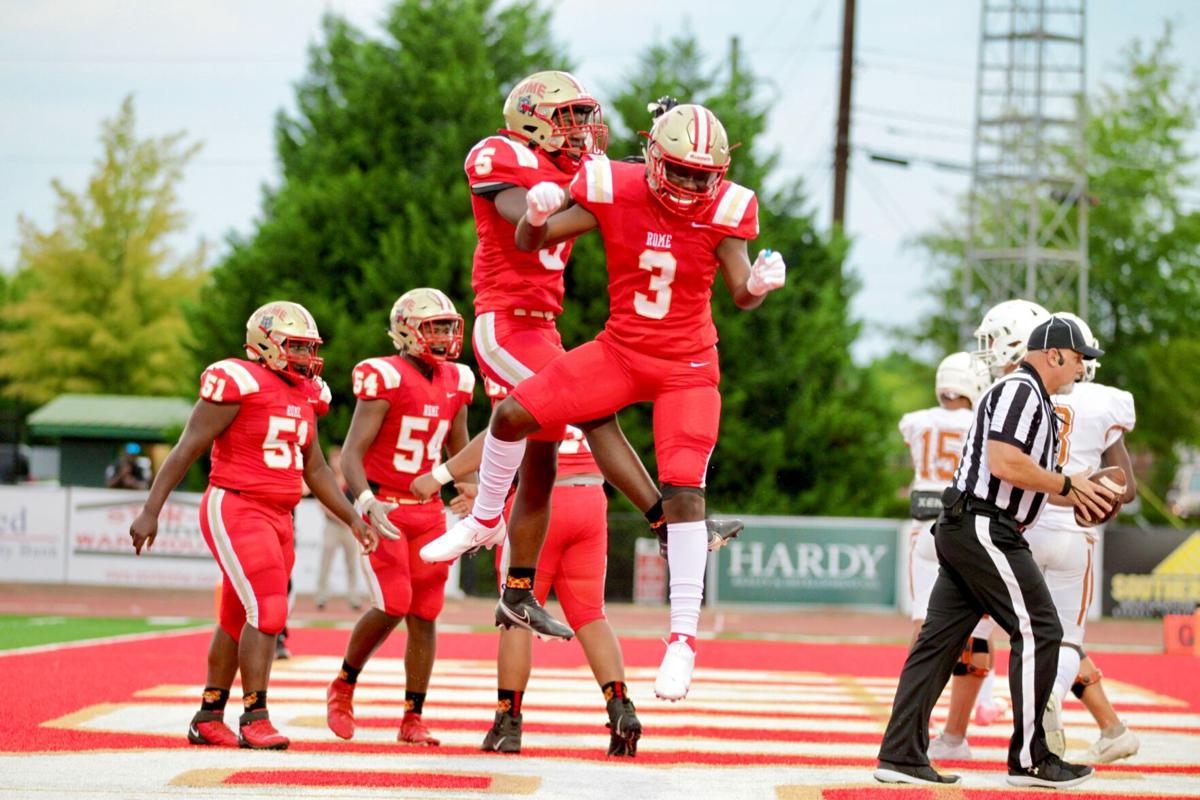 Rome’s Shaun Nelson (5) and DeKaylon Daniel celebrate a touchdown during the Wolves’ preseason scrimmage against the Kell Longhorns at Barron Stadium on Friday. 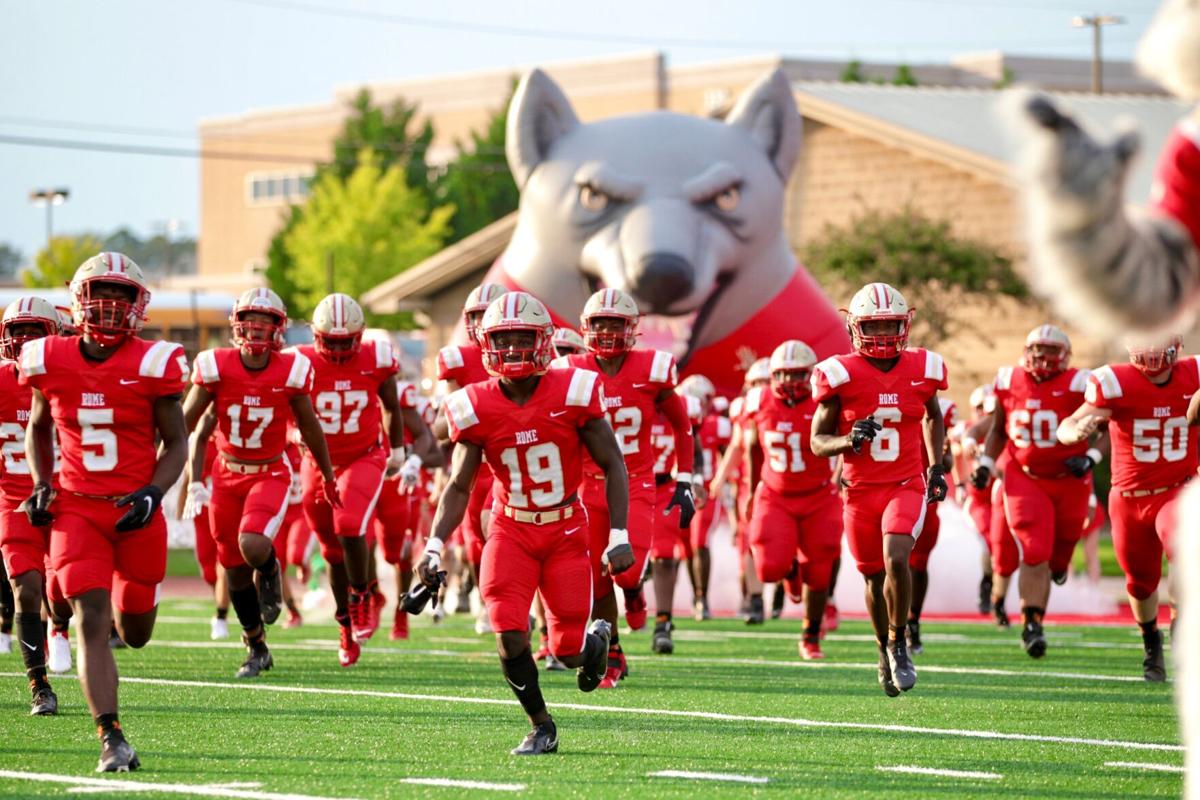 The Rome Wolves take the field for their preseason scrimmage against the Kell Longhorns on Friday at Barrom Stadium. 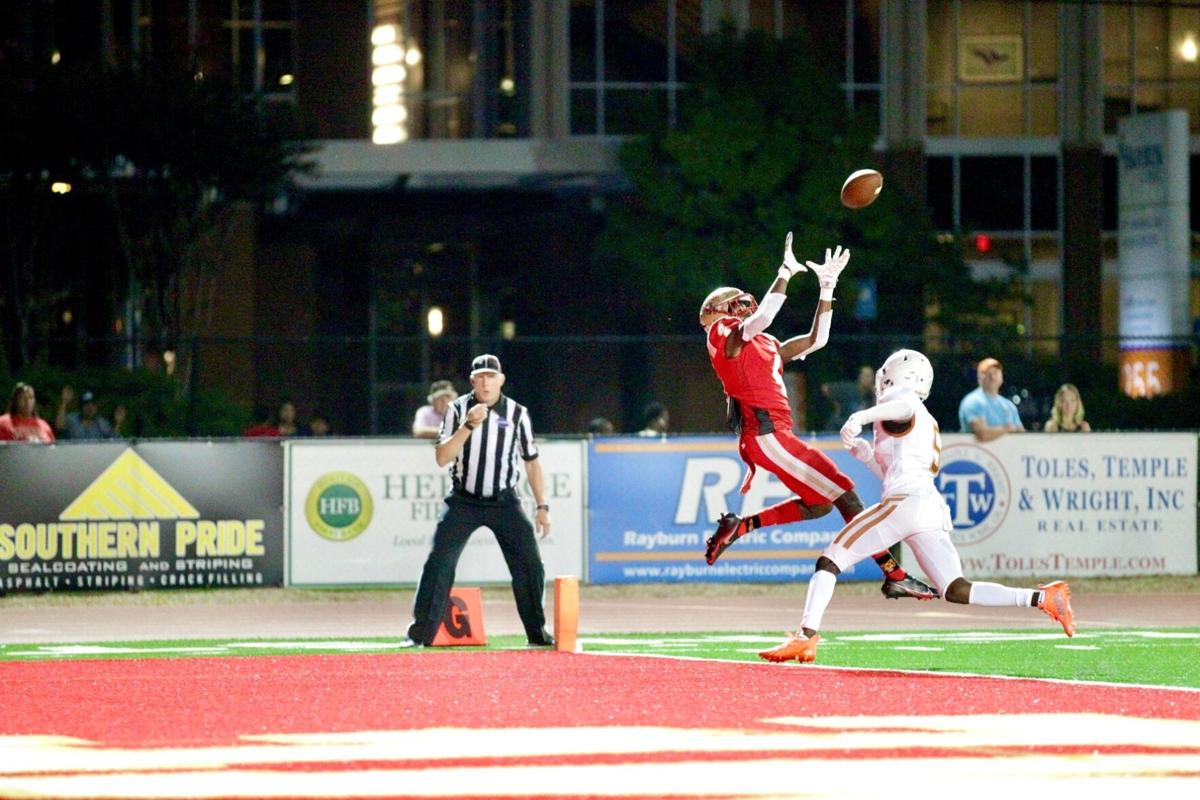 Rome’s Martel Hight catches a touchdown pass from Reece Fountain during the Wolves’ preseason scrimmage against the Kell Longhorns at Barron Stadium on Friday. 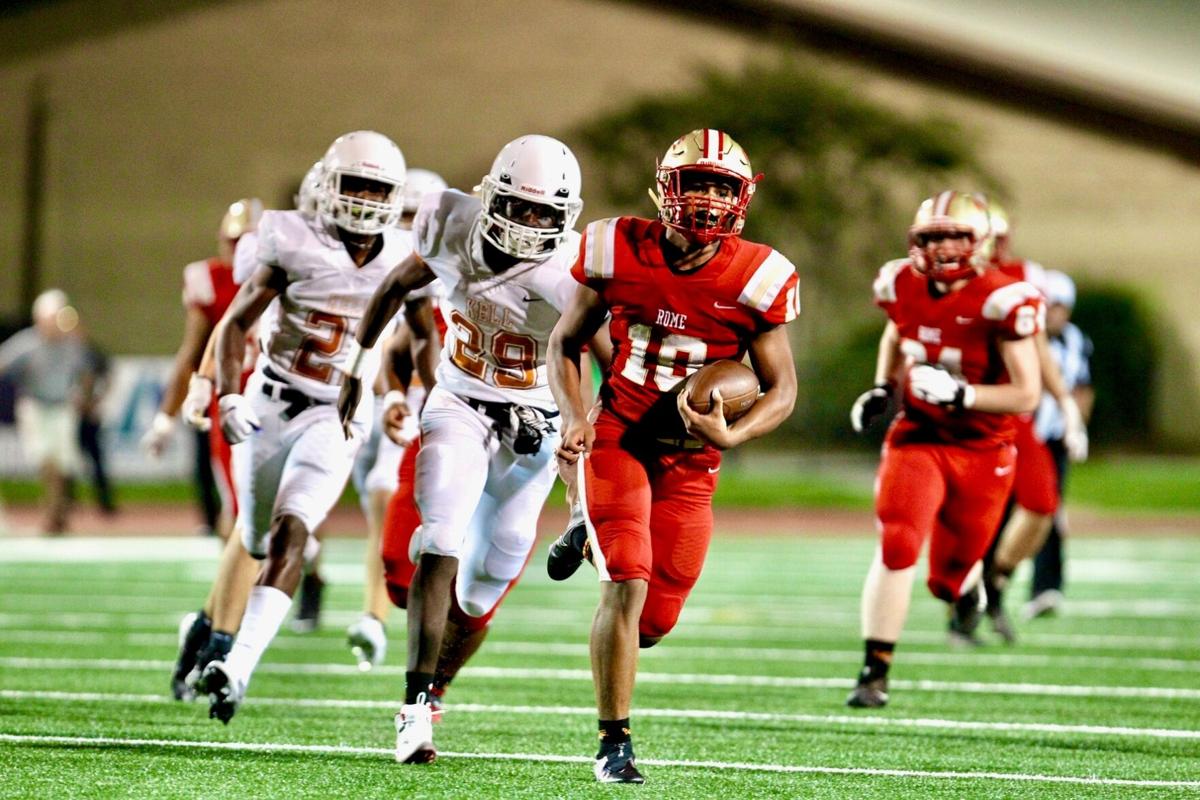 Rome freshman quarterback Jaeden Harmon takes off for the end zone during the Wolves' preseason scrimmage against the Kell Longhorns at Barron Stadium on Friday.

Rome’s Shaun Nelson (5) and DeKaylon Daniel celebrate a touchdown during the Wolves’ preseason scrimmage against the Kell Longhorns at Barron Stadium on Friday.

The Rome Wolves take the field for their preseason scrimmage against the Kell Longhorns on Friday at Barrom Stadium.

Rome’s Martel Hight catches a touchdown pass from Reece Fountain during the Wolves’ preseason scrimmage against the Kell Longhorns at Barron Stadium on Friday.

Rome freshman quarterback Jaeden Harmon takes off for the end zone during the Wolves' preseason scrimmage against the Kell Longhorns at Barron Stadium on Friday.

The preseason excitement surrounding Rome Wolves football rose a few more levels as a dominant defensive performance fueled a 35-0 shutout of the visiting Kell Longhorns Friday under the lights of Barron Stadium.

“Going into these (scrimmages), you don’t know what to expect,” Wolves head coach John Reid said. “Everybody’s coming out of the summer. I’m glad that we were a little bit tough to block up front. It’s always so fun to have the Rome community out. It gives them something to look forward to.”

Rome’s defensive front line proved tough for Kell to generate any kind of momentum, as the Wolves made 17 plays behind the line of scrimmage for a total loss of 76 yards and three sacks.

Offensively, Rome started slow, holding a 7-0 lead at halftime thanks to a 4-yard touchdown run from Shaun Nelson.

The second half saw the Wolves find their feet, as sophomore quarterback Reece Fountain found junior Martel Hight for two touchdowns in 2:16 to put the home side up 21-0 in the third quarter.

On Rome’s third touchdown drive, Fountain threw to Hight on three consecutive plays, the final a 12-yard over-the-shoulder grab to the left side of the end zone.

After subbing out the starting units, Rome continued to march on, as freshman quarterback Jaeden Harmon took off 38 yards to the house which had the Wolves up four scores after 36 minutes.

“We wanted to play a lot of guys,” Reid said. “You lift, you practice, and sometimes you win if you do it the right way. I like seeing happy kids.”

The final score of the night came courtesy of sophomore running back Chris Smith, who found space down the right side and turned on the afterburners 48 yards for a touchdown in the fourth quarter for the cherry on top.

“I think he’s a crowd favorite,” Reid said. “He’s certainly amongst our team. He’s quite a character in practice so it’s fun to have him out there.”

Rome now turns its attention to the Rockmart Yellow Jackets of Class AAA, as the two sides meet in the 2021 season opener on Friday, Aug. 20, in Polk County.

“We’ve still got two weeks to prepare for a really good team,” Reid said. “We’ve got some really great games coming up, so we’ve got to keep working and getting better, but I’m proud of these guys. They’ve worked really hard.”

CEDARTOWN -- Candidate qualifying was opened Wednesday for the second time in the last month in Polk County -- this time for a special election for a seat on the Cedartown City Commission.

Fleck to USC? As rumor mill churns, nothing is imminent.

Ken Jennings and Mayim Bialik to split ‘Jeopardy!’ hosting duties for rest of 2021

Hudson Valley to get at least $5.4 million from Johnson & Johnson opioid settlement

Swastikas reported in Lassiter bathrooms, less than a week after Pope incident