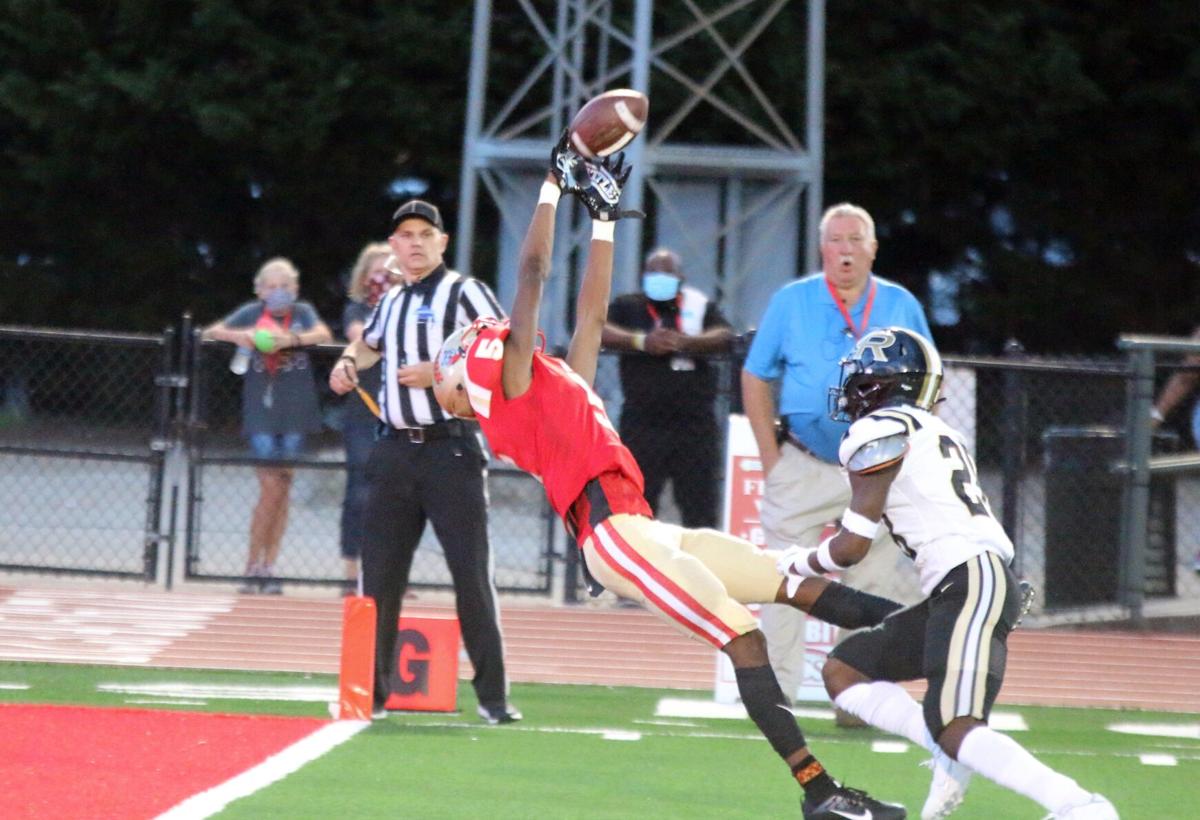 Rome High receiver Jay Wise (left) makes a catch as he falls backward into the end zone for a touchdown in front of Rockmart’s JoJo Haynes during the first quarter of Friday’s game at Barron Stadium. 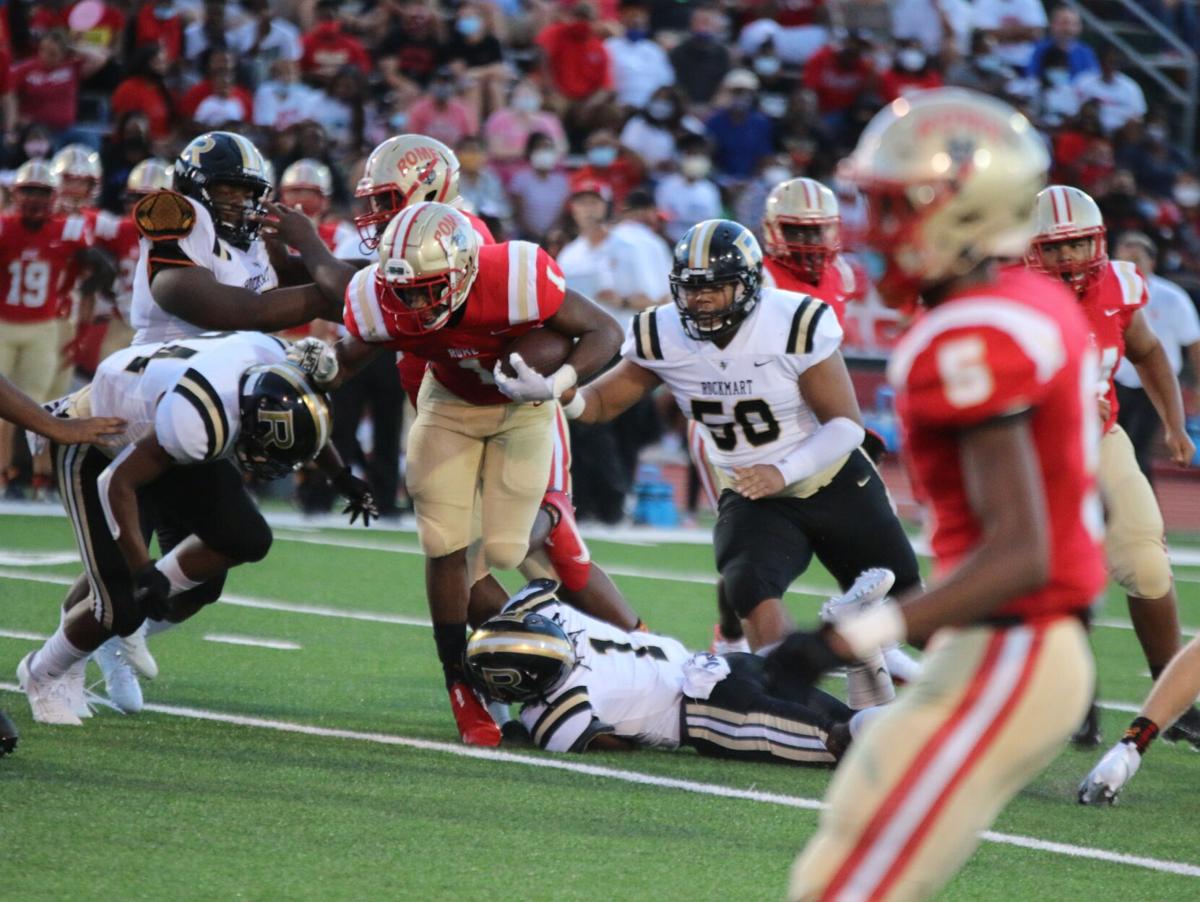 Rome High’s EJ Burks (center) works his way through the Rockmart defense, including Jai Penson (bottom), as he takes the ball up the field during the first quarter of their game Sept. 4 at Barron Stadium.

Rome High receiver Jay Wise (left) makes a catch as he falls backward into the end zone for a touchdown in front of Rockmart’s JoJo Haynes during the first quarter of Friday’s game at Barron Stadium.

Rome High’s EJ Burks (center) works his way through the Rockmart defense, including Jai Penson (bottom), as he takes the ball up the field during the first quarter of their game Sept. 4 at Barron Stadium.

Two teams whose resumes had placed them among the top in their respective classifications the last four years met to open the 2020 high school football season Friday night.

The result was a grudge match that came down to a few more mistakes by Rockmart as Rome High pulled away in the final quarter for a 28-21 win over the visiting Jackets at a lively Barron Stadium.

The Wolves had three interceptions and a significant fumble recovery in the final quarter that helped them get past a talented Class 3A squad looking to get a win over 6A Rome.

Rome quarterback Caleb Ellard threw a pair of acrobatic touchdown passes to receiver Jay Wise in the first quarter — both on one-play drives following interceptions. The senior then capped off a 97-yard drive with a 13-yard run for a score in the fourth that tied the game at 21 each with 11:13 left to play.

Rome head coach John Reid said going up against a tough opponent to open the season has been a common occurrence in recent years.

“It seems like we always get a short straw. They are a very, very difficult offense to play against. I mean, misdirection, a tremendous quarterback, no back offense, receivers all over the place, and then you’ve got to play them without ever seeing them on game film,” Reid said. “So that’s why it’s a great win because that is difficult to play against. They know what they’re doing.”

Rockmart had looked to its own senior quarterback, Javin Whatley, to help spark the Jackets’ offense most of the night, but he began having cramps in his right leg on the ensuing kickoff.

With Whatley’s time limited the rest of the game by the cramp, freshman JD Davis took over behind center, having scored on a 9-yard run in the second quarter to put Rockmart up 21-14 with just over a minute before halftime.

Rome’s defense, which had already been relentless throughout the evening, clamped down on the Jackets, and Davis was intercepted by the Wolves’ Martel Hight on a first-down throw.

Hight returned the pick 45 yards down to the Rockmart 11 before EJ Burks worked his way through the opposing defense and scored three plays later on a 4-yard scamper. Fernando Lopez-Romero’s fourth and final extra point kick put Rome on top, 28-21, with 6:07 left.

Whatley took his normal post on the Jackets’ kickoff return and took the kick 29 yards to the 40 before going 11 yards on a keeper to get into Rome territory. But the cramps returned and Davis came back in only to be hit by Rome’s Bryson Hill, which forced a fumble that was recovered by Wolves linebacker Brandon Smith.

With 3:16 left to play, Burks kept the ball moving on the following possession as Rockmart used its final two timeouts to try and conserve some clock. However, Ellard took a knee twice to run out the clock and seal the victory.

Whatley finished with 144 yards on 17 carries and a touchdown that came on a 12-yard marathon-style run off of a botched field goal attempt in the second quarter where he was the holder. He found Lanear McCrary on a 16-yard touchdown pass on fourth-and-4 to cap Rockmart’s opening drive.

Senior running back Burks had 97 yards rushing on 16 carries, while Rome teammates Wise and Jameion Leath both had interceptions in the first quarter.

Rome is off next week for its first bye of the season, while Rockmart hosts Polk County rival Cedartown.

WASHINGTON (AP) — A second Republican senator came out in opposition to filling a vacant Supreme Court seat before the Nov. 3 election while Speaker Nancy Pelosi asserted without details that the Democratic-led House has "options" for stalling or preventing President Donald Trump from quickl…

ATLANTA — For the last two decades, Georgia Republicans have cornered the market in U.S. Senate races.

Biden to focus on health care in Supreme Court debate