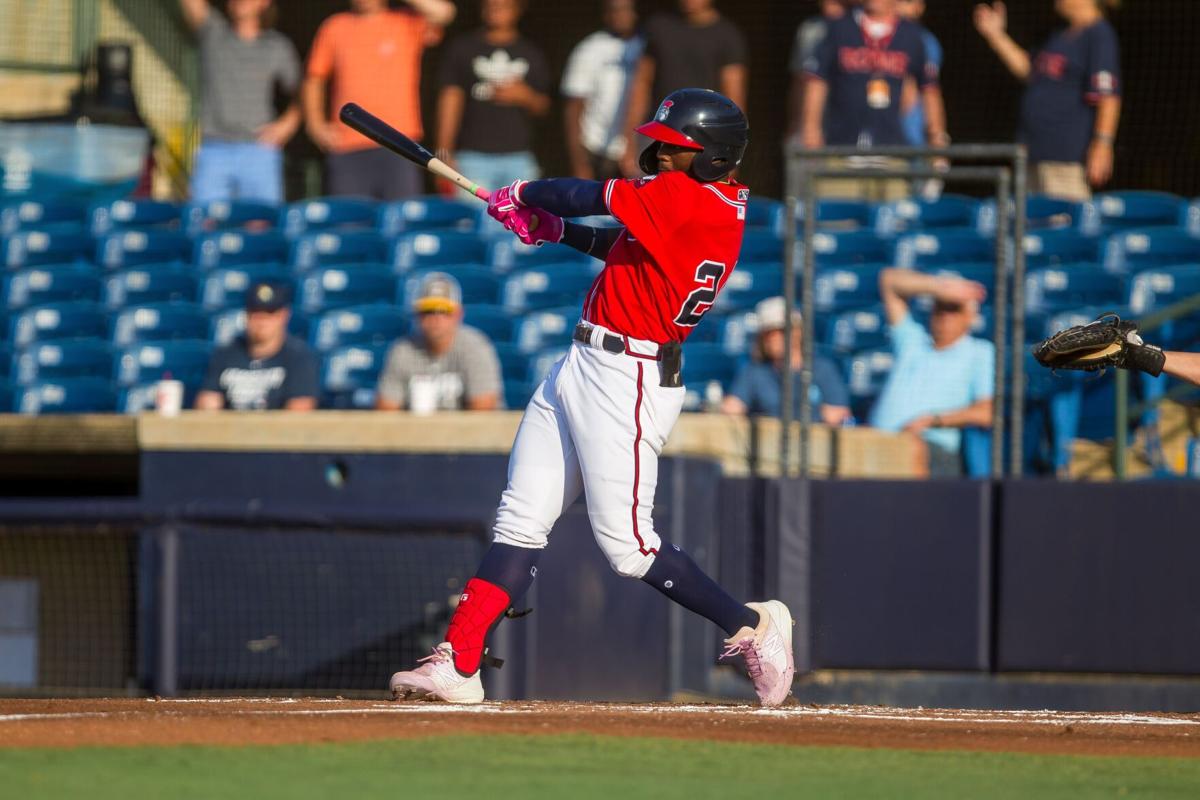 Rome’s Michael Harris II and the Rome Braves begin a six-game series against Greenville at State Mutual Stadium on Tuesday.

Rome’s Michael Harris II and the Rome Braves begin a six-game series against Greenville at State Mutual Stadium on Tuesday.

The Rome Braves look to turn around a rough road trip as the team travels to Hickory, North Carolina to battle the Crawdads in a six-game series beginning Tuesday. Rome has lost seven straight, including a sweep at the hands of the Greenville Drive last week in South Carolina.

Saturday’s contest in Greenville became a forgettable one for the road team. Despite jumping on the scoreboard first with Michael Harris II’s sixth home run of the year, the Drive scored four runs in the bottom half of the first inning.

Offensively, Stephen Scott and Joe Davis paced the Drive, going a combined 5-for-9 with two home runs and seven RBIs. Scott’s three-run blast in the bottom of the first would turn out to be the game-winning hit.

Andrew Moritz and Harris both hit RBI doubles to slice the Greenville edge down to 5-3, but the Drive restored their four-run edge when Davis hit a two-run homer over the wall in left center to make it 7-3.

Tyler Dearden’s RBI double in the bottom of the seventh inning to score Jake MacKenzie secured the game-winning hit and the series sweep in South Carolina.

Rome jumped on the board first in the top of the sixth inning when Michael Harris II smacked his 19th double of the year to left field, scoring Luke Waddell for a 1-0 lead. Stephen Scott’s sixth home run of the season tied the game in the bottom half of the inning.

ATLANTA - More Georgia families will be getting help from the state paying for child care under an initiative Gov. Brian Kemp announced Monday.

With six months to go before the primaries for Northwest Georgia’s congressional race, candidates are focused on fundraising.

President George W. Bush is remembering Colin Powell, who served as his secretary of state during his first term. Powell, 84, died Monday at Walter Reed National Medical Center due to COVID-19 related complications, his family said. They also noted he was fully vaccinated against the virus. In a statement from the George W. Bush Presidential Center, Bush said that he and his wife Laura were ...

Colin Powell, former U.S. secretary of state under President George W. Bush, died Monday morning from COVID-19 complications, his family wrote on Facebook. The 84-year-old was fully vaccinated against the virus, according to his family. Powell was the first the Black person to serve as secretary of state and as chairman of the Joint Chiefs of Staff. He also was awarded two Presidential Medals ...

The Rome Civic Center on Jackson Hill opens Monday as a second location where city residents can cast early votes in the municipal elections.

Over 160 people already voted in municipal elections, weekend voting on for Saturday

As the first week of early voting for Rome municipal elections wraps up, 168 people have cast their votes so far.

Georgia’s nationally watched U.S. Senate race – a contest that could decide the balance of power in the world’s greatest deliberative body – keeps raking in the big bucks.

In all his years of gridiron greatness, Herschel Walker never ran into anything like this.

This famous Italian singer is coming to Sacramento. Here's what he wants you to know

How much money did women lose in California due to gender pay gap? What a new study found