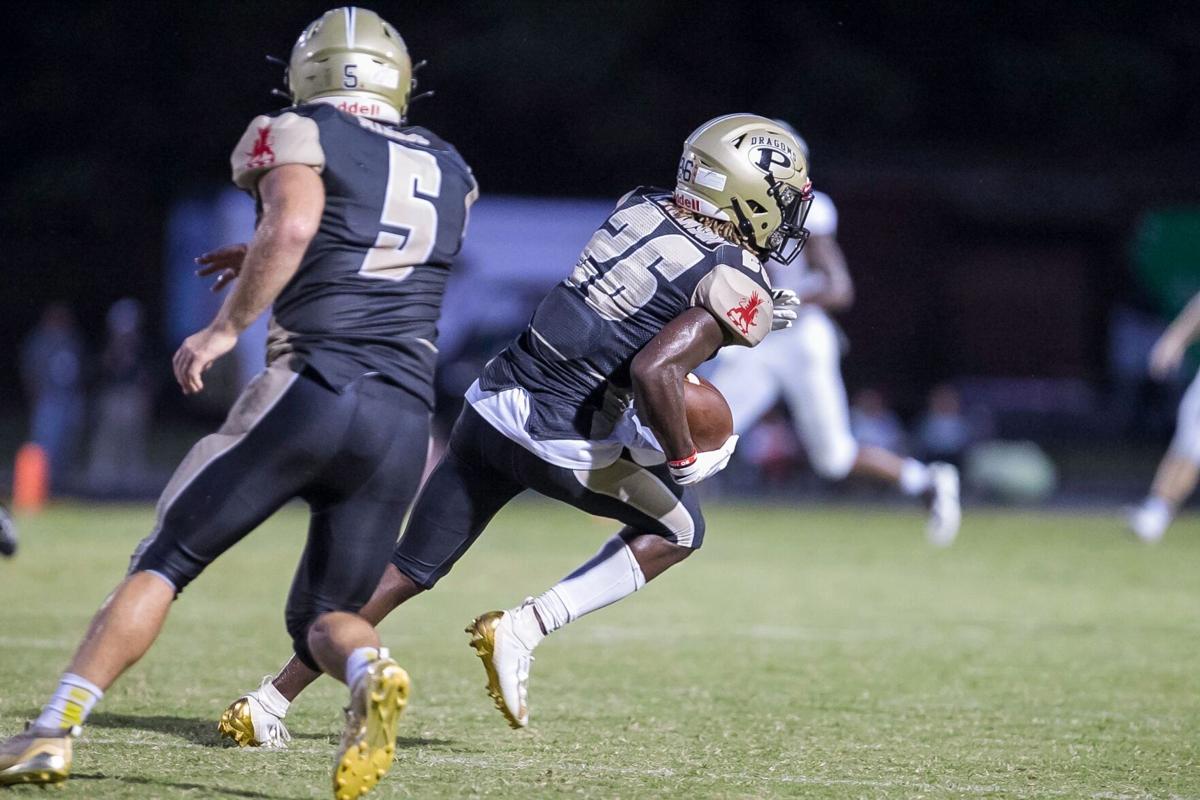 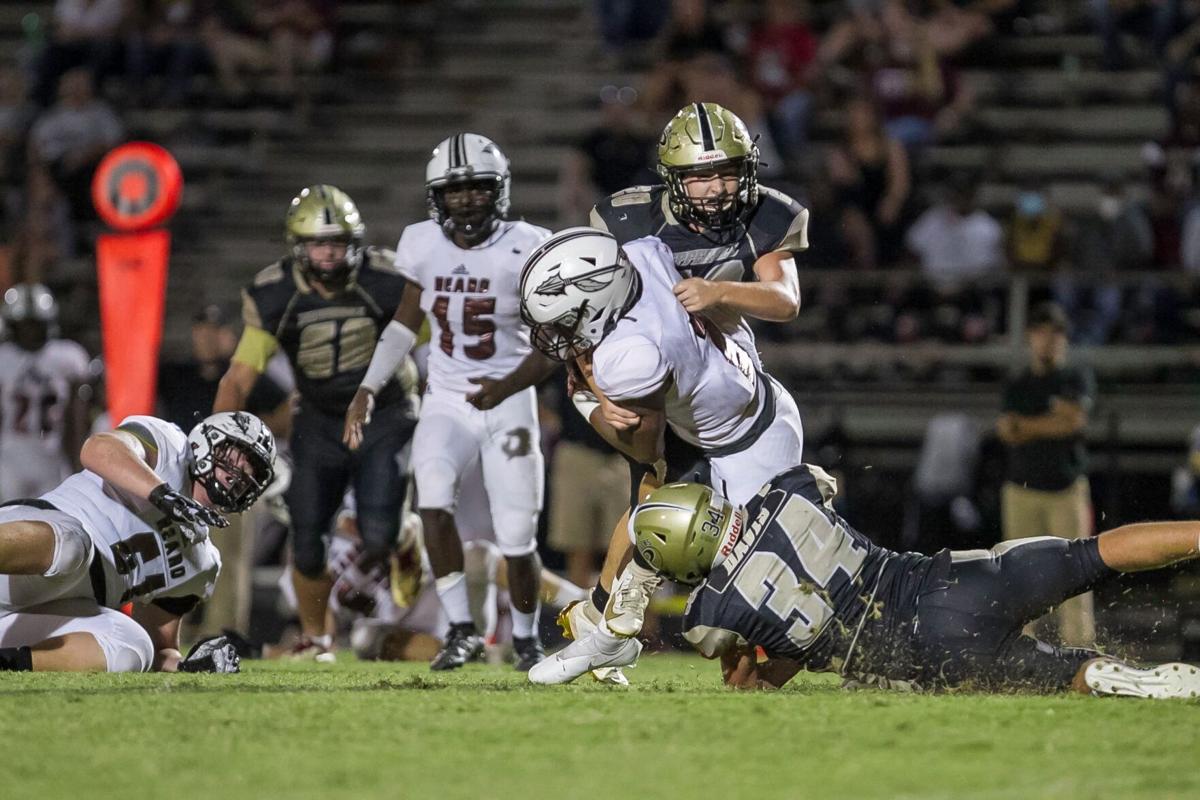 Pepperell’s Kolby Davis (34) and Brayden Giles (20) combine for a sack of Heard County quarterback Kesean Johnson during the Dragons’ game against Heard County at Dragon Stadium in Lindale.

Pepperell’s Kolby Davis (34) and Brayden Giles (20) combine for a sack of Heard County quarterback Kesean Johnson during the Dragons’ game against Heard County at Dragon Stadium in Lindale.

“Our kids played extremely hard,” Dragons head coach Rick Hurst said. “We’ve had a lot of adversity over the last couple of weeks losing some guys to injury. For them to come put and play the way they did tonight and go toe-to-toe with one of the top-ranked teams in the state in AA, I’m super proud of them.”

The Dragons fell behind the 8-ball early. On the second play of Pepperell’s first possession, sophomore quarterback Matthew Waddell’s pass to the left was intercepted by Heard County’s Ayden Cannon and returned 24 yard for a pick six.

However, Waddell rebounded as the game went along and finished 9-for-14 for 147 yards, one touchdown and the aforementioned interception. He also recorded 69 rushing yards and one TD.

“After that first play, a young kid sometimes would’ve tucked their head and never been able to recover from that first interception,” Hurst said. “He came back strong. The future is really, really bright for him.”

Waddell’s favorite target was senior Tray Robinson, and the two shined offensively. Waddell located Robinson in the left corner of the end zone from six yards out to knot the score at 7-7 with 6:07 to play in the first.

That score would only last 50 seconds as the Dragons’ defense struggled to contain Heard County’s big plays in the first half. Braves quarterback Kesean Johnson spied Ayden Cannon over the top for a 79-yard strike to retake the lead 13-7.

After trading three-and-outs, Pepperell brought out the fireworks (and cannon) as Drake Miller fielded a Heard County punt, then quickly reserved it to Robinson. Robinson, in turn, charged down the Dragon sideline, weaving through traffic and finally made a cutback move to cross the goal line for a 75-yard punt return TD.

The Dragons had their first lead of the game at 14-13, but it would be shortlived, as a 73-yard rush by Alex Boyd on the next Heard County possession would set up a 10-yard dash by Ashton Bonner for a 19-14 edge.

However, Bonner’s 5-yard rush for six with six minutes to play in the fourth proved to be the difference, as the Dragon defense could not contain the Braves’ rushing attack.

“Defensively, we’ve got to be able to tackle better,” Hurst said. “It’s really hurting us. We’re doing well in spurts, but in spurts we’re not.”

Pepperell’s offense featured Waddell under center for majority of the contest, and Hurst said that will continue.

“Matthew’s our guy,” Hurst said. “We’re going to use Tray (Robinson) in certain situations, but Matthew grew up a ton over the last couple of weeks.”

Pepperell remains in Lindale and prepares to welcome Bremen to Dragon Stadium next Friday, Sept. 18, at 7:30 p.m.

WASHINGTON (AP) — A second Republican senator came out in opposition to filling a vacant Supreme Court seat before the Nov. 3 election while Speaker Nancy Pelosi asserted without details that the Democratic-led House has "options" for stalling or preventing President Donald Trump from quickl…

ATLANTA — For the last two decades, Georgia Republicans have cornered the market in U.S. Senate races.

Biden to focus on health care in Supreme Court debate