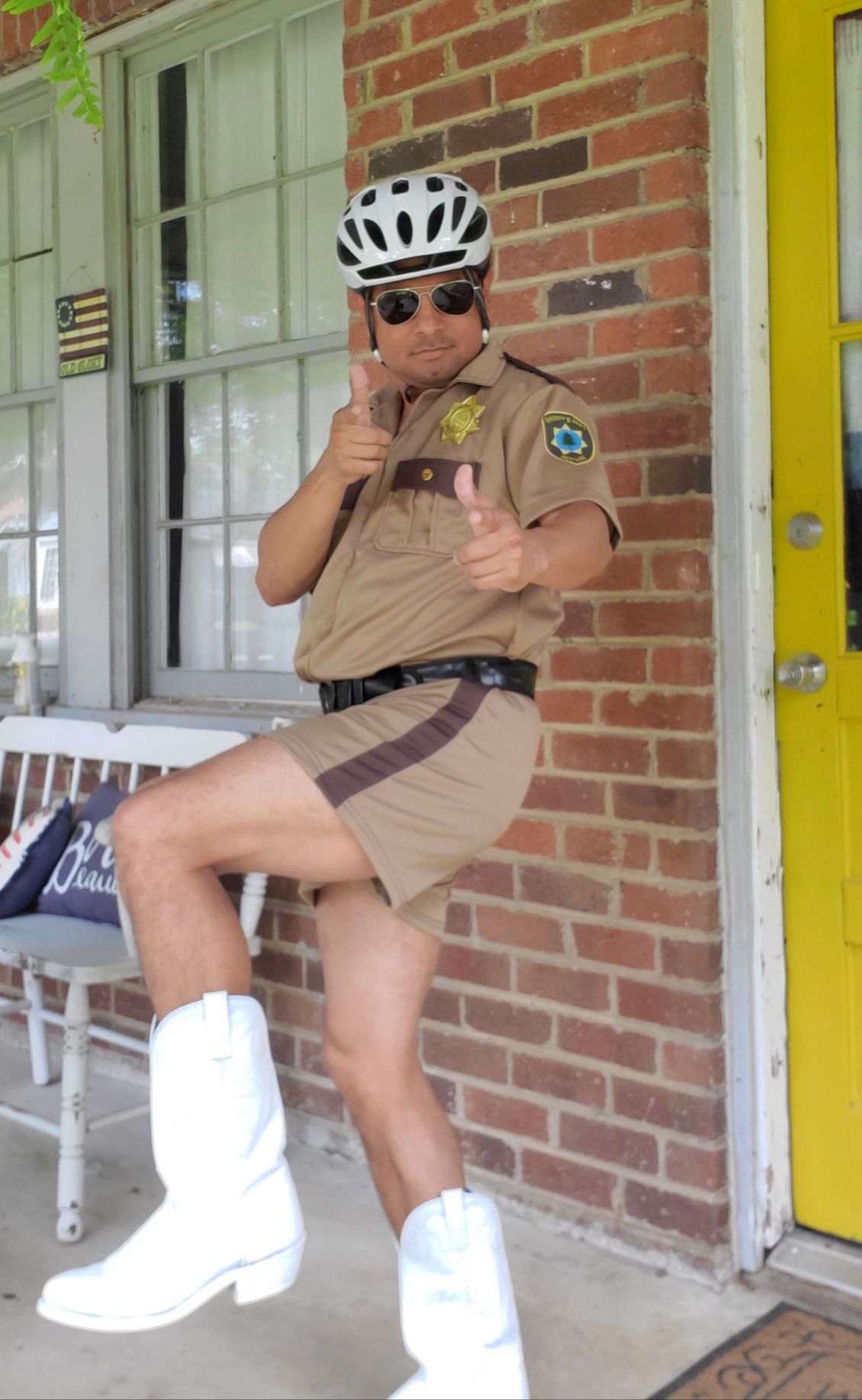 The costume I spent time and money putting together only to get to the party at which no one else was wearing a costume.

I made a complete fool of myself this past weekend and I’ll happily tell you how it happened.

A few weeks ago I got a Facebook invitation to a social distance-friendly birthday party for a friend of mine. The event’s Facebook page said it would be held outside in a host family’s driveway and to make it more fun, it would be a costume party and the theme was TV characters.

I immediately knew it would be a fun event. Fun people were hosting it and the costumes would make for a really good time.

For my costume (y’all know I like to be as ridiculous as I can) I chose the character of Lieutenant Dangle from the comedy show Reno 911. Lt. Dangle works for the Reno sheriff’s department and he wears very short uniform shorts. But in one of the show’s most memorable episodes he purchases brand new gleaming white cowboy boots and is so proud of them. He struts around for the camera claiming that he’s just “new boot goofin’.”

So I decided to go all out.

I bought the costume of a shirt and short shorts and utility belt. But because deliveries are taking longer than normal I had to pay extra to have it delivered in time for the party.

And then there was the issue of cowboy boots. Lt. Dangle is wearing crisp gleaming white cowboy boots. So I first asked people on Facebook if I could borrow a pair from someone. But of course no one just has white cowboy boots laying around. So since I’m so committed to this costume I PURCHASE regular cowboy boots and I painstakingly paint them to look like the ones in the episode.

Then to finish off the costume, I put on a bike helmet because in that episode, Dangle is wearing a helmet.

I was so proud of my little costume, y’all. I wore it around the house just strutting and stomping trying to mimic Lt. Dangle’s actions exactly.

The party was on Saturday and I got all dressed up (except for the helmet) and I drove down Horseleg Creek Road to the party. As I pulled up to the house, I parked behind a Jeep just in time to see the people get out of it.

I immediately put on my little helmet that was in the passenger seat and my aviator sunglasses. Then I looked up to see someone from the Jeep staring at me because I obviously looked strange with a bicycle helmet on in my car.

No one in the Jeep was wearing a costume. That was a little disappointing to think that there would be a family there not in costume. But I know not everyone may have had the time to get dressed up.

But as my eyes followed that family up the hill to the party I could see the other partygoers (maintaining safe distances) and socializing. I thought it was odd that I couldn’t make out people’s costumes. It looked like folks just had on regular clothes. In fact, I couldn’t see any costumes at all. And it’s then that I realized not ONE SINGLE person was in costume. Not even the hosts.

It took me a minute to realize that no one at this party had bothered to wear a costume even though they had weeks to plan. And at NO POINT did anyone say on the event’s Facebook page that they weren’t wearing a costume or that perhaps costumes weren’t the best idea or maybe we should change the theme. No, no one said anything and let me believe we were all going to be in costume.

And these are fun people. I would have thought these folks would have gone all out with their costumes.

I felt so embarrassed.

Now my buddy was at the party and I knew he had purchased a costume so I called him on his phone because there was no way I was gettin’ out of my car. He came down to my car and I guess he could tell how mad I was because he didn’t try to dissuade me when I told him I was surely NOT getting out of my car in this ridiculous costume when no one else was wearing one.

Now he tried to tell me that a couple other people at the party were wearing T-shirts as their costumes to which I responded that a T-shirt is most certainly NOT a costume and that didn’t make me feel any better.

I was mortified. Everyone saw me park my car and NOT get out. But I was not going to get out of that car in that stupid costume. I turned around and headed back down Horseleg Creek Road and back to my house.

The silver lining in all this is because the hosts were mindful of social distancing, the event was held outside and I could see from the road that no one was in costume. Can you imagine how I would have felt if it had been an indoor party and I had opened the door and walked in to a room full of people not wearing costumes?

The Lord moves in mysterious ways and he knew what he was doing by letting me see the other people before I made an even bigger fool of myself.