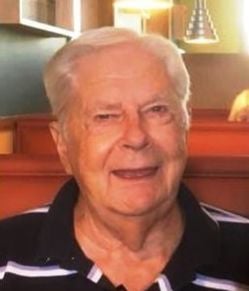 Former Cave Spring Mayor Gayle T. Godfrey, age 82, died Tuesday afternoon, March 10, 2020 after a brief illness. A native of Cherokee County, Alabama, Mr. Godfrey was born September 20, 1937, a son of the late W. R. Godfrey and the late Gertrude Ellis Godfrey. Mr. Godfrey had made his home in Cave Spring for many years, was a veteran of the U. S. Army, having served in Korea during the Korean War, was a former Cave Spring City Council member, he served as Mayor of Cave Spring, and was associated with the Floyd County Tax Assessor's office for twelve years. Mr. Godfrey was associated with the Georgia Kraft Company for 40 years prior to his retirement in 2000, was a home builder and was in the home rental business for 60 years. One of the founders of the Bank of Cave Spring, now the United Community Bank, Mr. Godfrey later ran the General Store in Cave Spring for 16 years. Mr. Godfrey was a member of the First Baptist Church of Cave Spring, and was a member of the Mackey Lodge #120 F. & A. M. for over 60 years. The first member appointed to the Downtown Development Authority by Mayor Rob Ware, Mr. Godfrey had also served three 6 years terms on the Floyd County Jury Commission, and 14 years on the Floyd County Board of Equalization. Mr. Godfrey had said that the very best trip on his life was when he and Peggy went to the Holy Land with Georgia Governor Lester Maddox and his wife in 1972. Besides his parents, Mr. Godfrey was preceded in death by two brothers, Roland Godfrey and Leon Godfrey, by two sisters, infant sister Foy Godfrey, and Mrs. Doris Godfrey Shaw, and by a sister in law, Mrs. Betty Godfrey. Survivors include one son, Robert Godfrey and his wife Brenda; one daughter, Susan Gayle Allen and her husband Jon and by a stepson, Steve Pruitt and his wife LaVerne Eight grandchildren, four great-grandchildren, two brothers, James Godfrey and Therron Godfrey, his sons' mother, Mrs. Peggy Myers, the mother of his daughter and his best friend, Connie Godfrey, and a special friend Angie Gladden also survive. Funeral services for Mr. Godfrey will be held at John House's Cave Spring Chapel Saturday afternoon, March 14, 2020 at 2:00 P.M. with Rev. Anthony Trawick officiating. Interment will follow in the family lot of the Cave Spring Cemetery. Pallbearers will include Steven Pruitt, Tate Godfrey, Mack Godfrey, Tom Lindsey, Larry Hestly, Charles Howell and John House. An honorary escort will include Ed Wallace, Charles Ledbetter, Rob Ware, Leonard Steed, Dennis Shoaf, John Shaw, and John Russell. The Mackey Lodge #120 F. & A.M. will have charge of the graveside rites. The family will receive friends at the funeral home Friday evening, March 13, 2020, from 6:00 P.M. until 8:00 P.M. John House's Cave Spring Chapel

To plant a tree in memory of Gayle Godfrey as a living tribute, please visit Tribute Store.
+1
Plant a tree