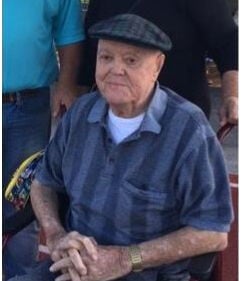 Mr. James Benjamin "J. B." Daniel, age 93, of Cave Spring, GA, passed away Friday, October 30, 2020, in a local hospital surrounded by his loving family. Mr. Daniel was born in Thomaston, GA on August 1, 1927, son of the late Leon Durell Daniel and the late Berte Reddick Daniel Allen. He was also preceded in death by his first wife, Edith Taylor Daniel, by his late wife, Jean Beck Daniel, by a sister, Janice Adams, and by two brothers, Bobby L. and Rickie Daniel. A retired Staff Sergeant in the United States Army, he served for over 22 years during the Korean War and Vietnam War eras. Following his military service, he retired from Civil Service following 20 years of employment. Mr. Daniel was a member of the Oostanaula Lodge #113 F. & A. M. and was a Mason for over 71 years. He was also a member of the American Legion Post #5 and the V. F. W. Post #4911. He was of the Methodist faith. "J. B.", as he was affectionately known, was a very kind and giving man. He loved his country, his family, and most of all the good Lord above. He always had a joke to tell to put a smile on your face. He loved to travel and fish. He enjoyed catfish and Krystal hamburgers that he could not get for over 20 years while in California. He is survived by a sister, Pat Daniel Druce, Thomaston, GA, and by nieces, nephews, and cousins, who he was always like a father to and they cherished him dearly. Funeral services will be held on Tuesday, November 3, 2020, at 3pm in the Chapel at Henderson & Sons Funeral Home, South Chapel, with the Rev. Don Voyles officiating. Social distancing guidelines will be followed. Interment will follow in Oaknoll Memorial Gardens with the American Legion Post #5 Honor Guard presenting military honors and the Oostanaula Lodge #113 F. & A. M. delivering masonic rites. The family will receive friends at Henderson & Sons Funeral Home, South Chapel, on Tuesday from 1 until 2:45pm. Social distancing guidelines will be followed. Henderson & Sons Funeral Home, South Chapel, has charge of the funeral arrangements.