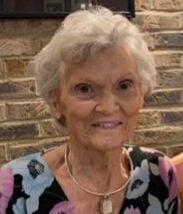 Mrs. Martha Jo Harper Brewer, age 86, of Rome, passed away on Monday, May 31, 2021, at a Cartersville healthcare facility. Mrs. Brewer was born in Floyd County, Georgia on October 12, 1934, daughter of the late Warner Asa Harper and the late Johnnie McKinney Harper. She was also preceded in death by a sister, Wilma Springer. Mrs. Brewer was a member of Calvary Baptist Church. She worked for several years at Celanese Corporation and then retired from Hostess Bakery. After retirement, she went back to work for Winshape at Berry College until she was 80 years old. Survivors include her husband of 69 years, Harlan Brewer, to whom she was married on May 28, 1952; a daughter, Jennifer Clark (Brad), Rome; three sons, Ricky Brewer, Rome, Bradley Brewer, Rome, and Kevin Brewer (Emily), Rome; 8 grandchildren, 12 great grandchildren; nieces and nephews. Funeral services will be held on Friday, June 4, 2021, at 11am at the graveside at Oaknoll Memorial Gardens. The Rev. Tony Cargle will officiate with her son, Kevin Brewer, delivering the eulogy. The family will receive friends at Henderson & Sons Funeral Home, Oaknoll Chapel, on Thursday from 5 until 7pm. Henderson & Sons Funeral Home, Oaknoll Chapel, has charge of the funeral arrangements.

To plant a tree in memory of Martha Brewer as a living tribute, please visit Tribute Store.
+1
Plant a tree