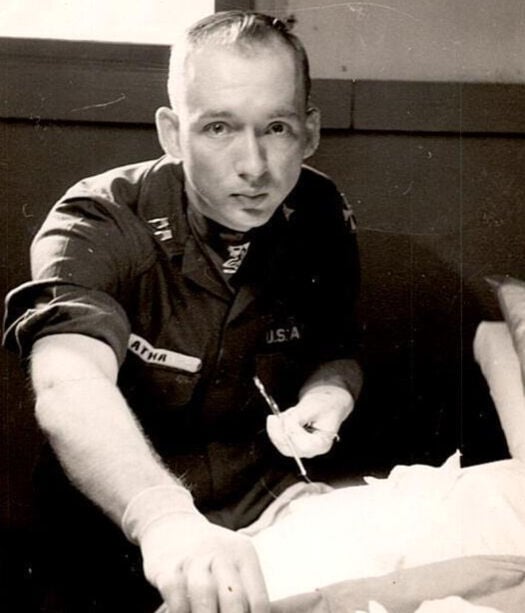 Dr. William J. Atha, age 88, of Rome, GA passed away at his home on Sunday, September 6, 2020. Dr. William J. Atha, known as "Jack" to friends and family, was born in Epworth, Georgia on June 23, 1932 to W. J. Atha, a Methodist Minister and Ruth Crocker Atha, a school teacher. Jack graduated from Darlington School in 1951 and North Georgia College, B.S. Biology, in 1954. He then went on to the Medical College of Georgia earning a Doctor of Medicine in 1958. Jack completed an internship at Rex Hospital in Raleigh, N.C. in 1959 where he met Vivian Brooks and to whom he married on July 18, 1959. Jack then spent two years in Korea, a medical officer attached to the US Army 11th Engineer Battalion. On his return from overseas military service in 1961, he opened a general practice in West Point, Georgia where he worked until 1970 when he moved his family to Augusta, Georgia to complete a residency in anesthesia. In 1972, he accepted an Anesthesiologist position with Floyd Anesthesia Associates in Rome, GA, where he worked for 26 years before retiring in 1998. Jack was believer in Jesus Christ and worshiped at the First United Methodist Church of Rome where he was a member. He is survived by his wife, Vivian Brooks Atha and his children - Victor Atha of Rome, GA, Steve Atha of Cumming, GA, Rebecca Atha Cain (Mark) of Augusta, GA, Will Atha of Rome, GA, Josh Atha of Rome, GA along with a number of grand children, nieces and nephews. He is preceded in death by his brother, John Atha and his sister, Joy Atha Moyer. Jack enjoyed amateur radio, gardening, woodworking and civil war history. He loved playing the piano and played for the Rome Symphony Orchestra for several years. The family will receive friends at Daniel's Funeral home on Saturday, September 12, 2020 from 10 to 11 a.m. with the Funeral service to follow in the chapel of Daniel's Funeral Home. In lieu of flowers, please send contributions to the Salvation Army of Rome, Georgia. Daniel's Funeral Home has charge of the arrangements.