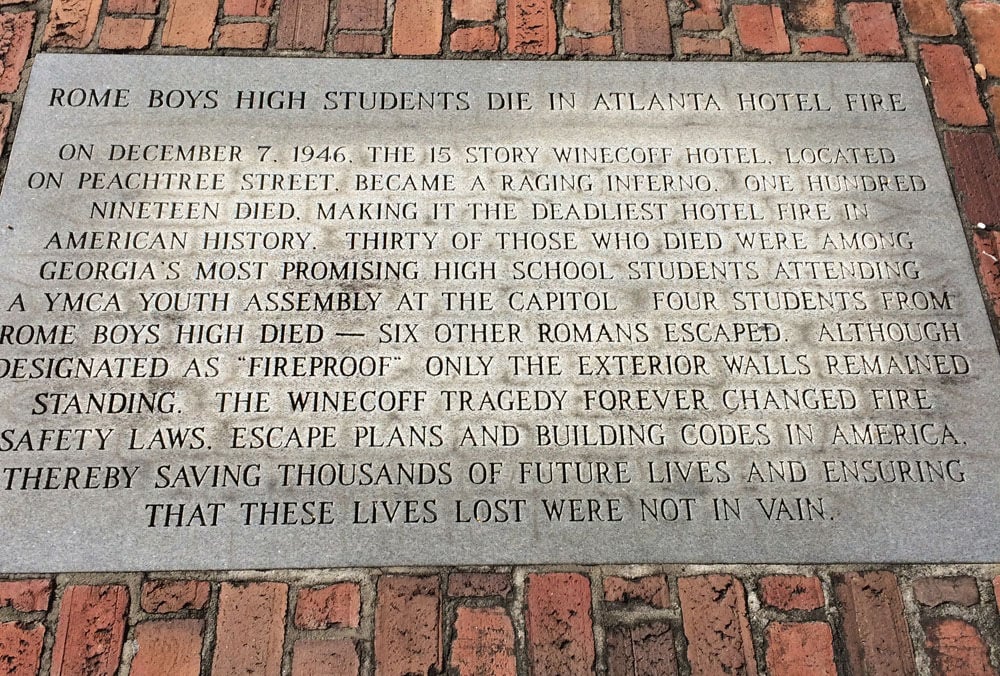 A picture of the memorial to the four Romans who perished in the Winecoff Hotel fire on Dec. 7, 1946, in Atlanta. The memorial can be found at the corner of Broad Street and Sixth Avenue. 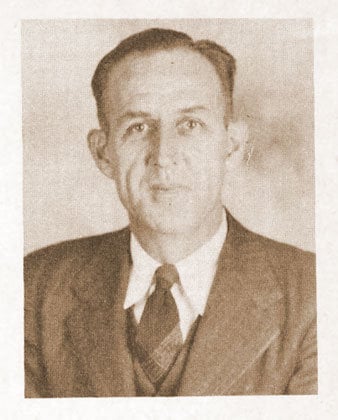 C.E. Hamil is shown from the 1947 school yearbook. (contributed image)

A picture of the memorial to the four Romans who perished in the Winecoff Hotel fire on Dec. 7, 1946, in Atlanta. The memorial can be found at the corner of Broad Street and Sixth Avenue.

C.E. Hamil is shown from the 1947 school yearbook. (contributed image)

Rome native Richard Hamil believes that time is a great healer, at least in his case.

He was 9 years old on Dec. 7, 1946, and had gone to the YMCA Hi-Y Youth Assembly in Atlanta with Rome high school students, when fire engulfed the Winecoff Hotel. The blaze killed four of the teenagers from Rome and 115 others.

Hamil, who has lived in Dawsonville for the past 13 years, said he rarely thinks about the tragic fire, except at this time of year. He recalls having nightmares about the fire for a few years after, but time eventually eased his mind.

“Seventy years is a long time, I guess time does end up healing all wounds,” Hamil said.

His father, C.E. Hamil, was a teacher at Rome Boys High School and the adviser for the YMCA group. The boys were all in the Winecoff, while young girls who participated in the event were in a different hotel.

Hamil remembers much of the incident like it was yesterday. Ironically, he doesn’t have a full memory of his rescue.

“We woke up in the wee hours of the morning to the sound of sirens and other confusion,” Hamil said.

He could not smell smoke in his room on the 15th floor, but when his father opened the door to see what was going on, the hallway was filled with smoke.

The building did not have exterior fire escapes and the only interior stairway was wrapped about a central elevator shaft. They quickly determined that was not an option.

“We got out and got confused and ended up in a room with a woman from Mississippi. Her name was Jane Wallace,” Hamil said.

He said the woman was getting ready to jump, but his father talked her out of that.

“We got the window open; we were on the back side of the hotel next to the Mortgage Guarantee Building,” Hamil said.

Hamil took a lamp off the desk to shine a light out the window, letting people know they were there. He remembers thinking it was odd that they never lost power in the room and running water was available throughout the disaster. He recalls going to the bathroom and wetting towels to put over their face to help breathe.

Hamil said he believes a custodian at the Mortgage Guarantee Building devised a plan to extend a ladder across from the building to the hotel, and cover it with boards so people could crawl across.

“The last thing I remember was somebody yelling ‘grab the ladder,’” he said. “Somebody took me across the ladder. The next thing I know I was on the ground beside the Mortgage Guarantee Building, on the sidewalk, and I was taken to Grady Hospital by a taxi cab.”

Hamil shared that his father was devastated when he learned the four boys had died. His father lived and breathed his teaching, but a pastor counseled him at the time and community members let him know it wasn’t his fault.

The boys who died were on the eighth floor. The boys who survived were on a floor much closer to the street and got out by going down a drain pipe to the top of the old Candler Shoe Store.

Hamil attended a program on the fire at Heritage Sandy Springs on Tuesday, and had lunch in the restored Winecoff, which is now a luxury, boutique hotel called the Ellis Hotel.

East Cobb couple on founding a mask company in a pandemic

Westport officials, residents discuss what to do with $8.4 million in federal funding