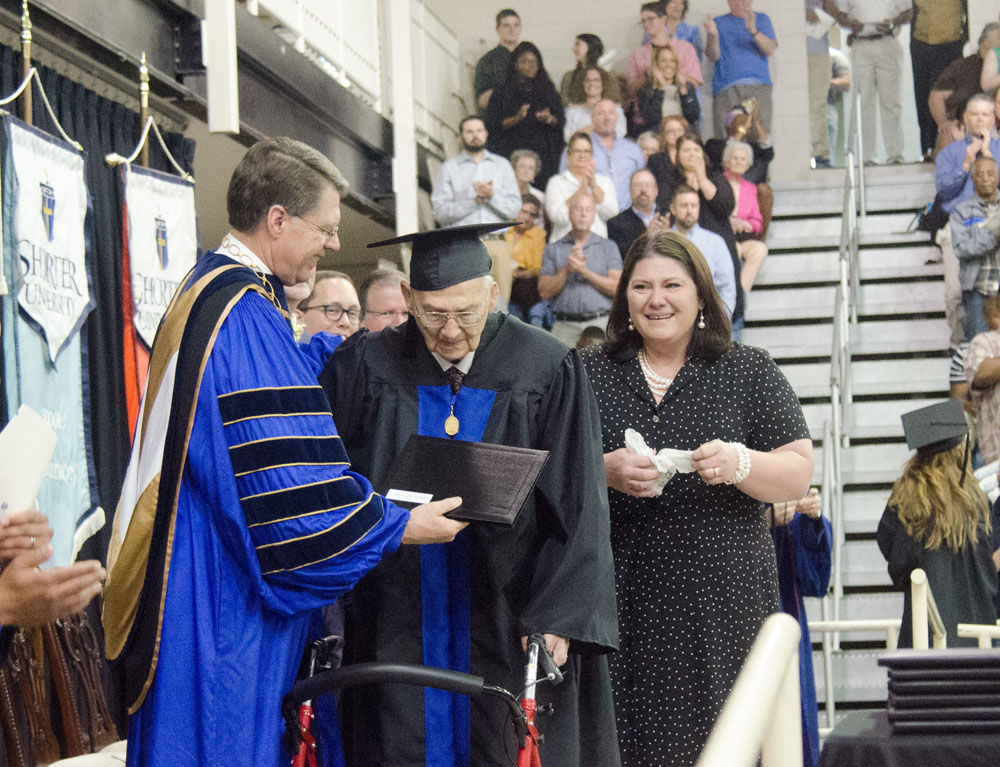 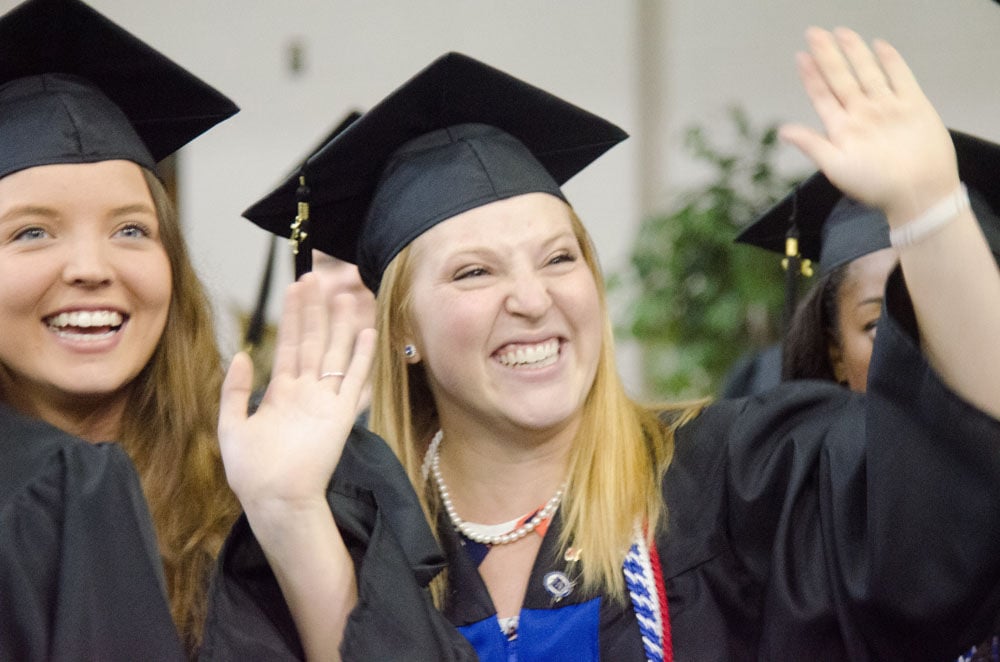 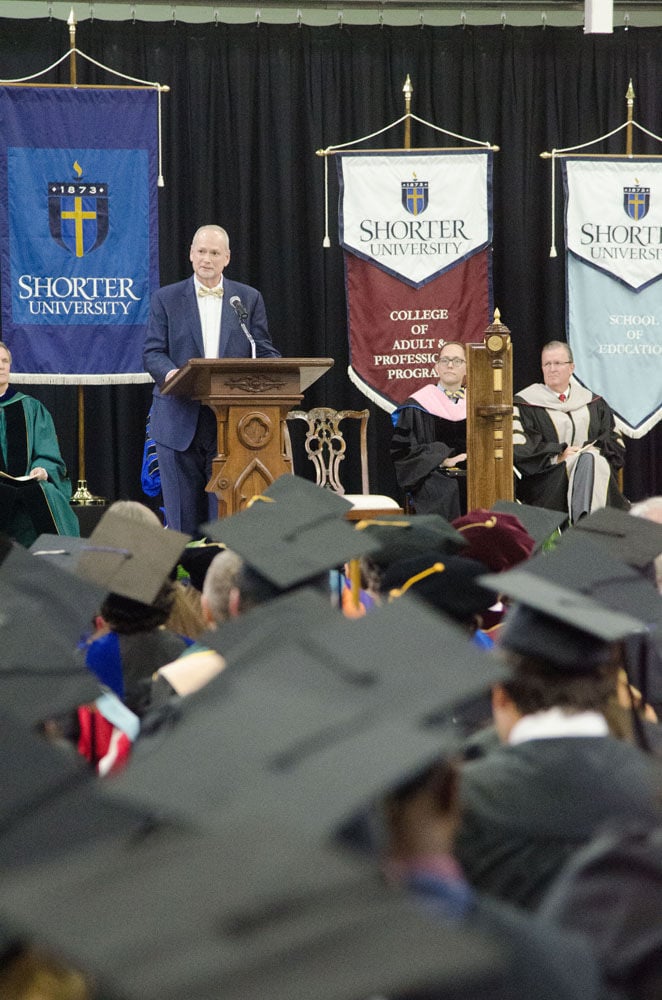 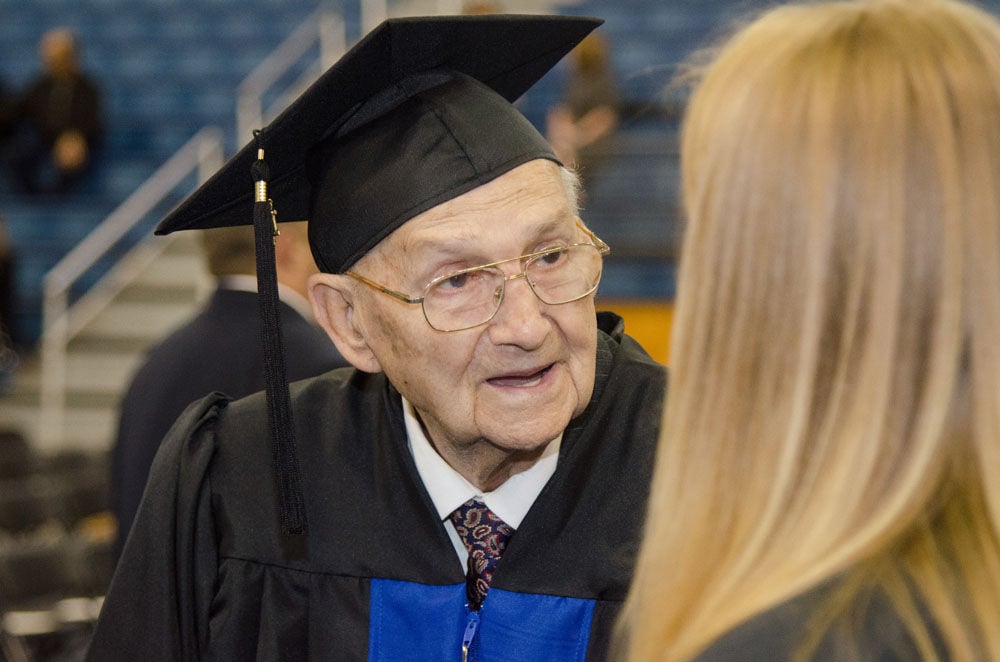 The Rev. Horace Sheffield talks with one of his fellow graduates before Friday’s ceremony at the Winthrop-King Centre on Shorter University's campus. (Photo contributed by Dawn Tolbert) 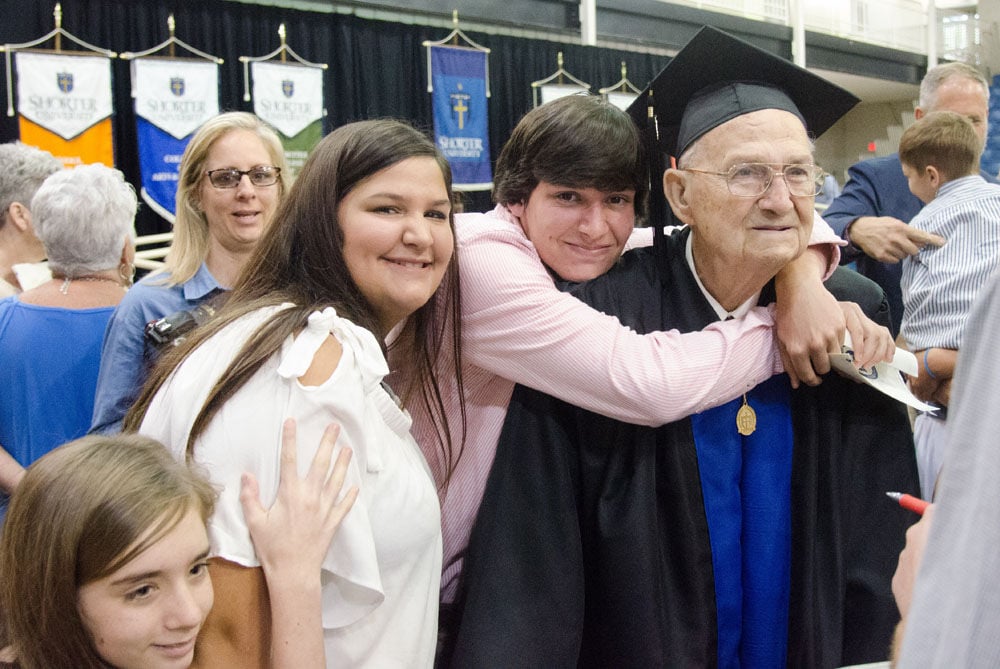 The Rev. Horace Sheffield receives hugs from some members of his family following the commencement ceremony at Shorter University on Friday, May 5, 2017. (Photo contributed by Dawn Tolbert)

The Rev. Horace Sheffield talks with one of his fellow graduates before Friday’s ceremony at the Winthrop-King Centre on Shorter University's campus. (Photo contributed by Dawn Tolbert)

The Rev. Horace Sheffield receives hugs from some members of his family following the commencement ceremony at Shorter University on Friday, May 5, 2017. (Photo contributed by Dawn Tolbert)

As Shorter University’s Class of 2017 walked across the stage at the Winthrop-King Centre to receive their diplomas, one graduate in particular was completing a very long journey.

The Rev. Horace Sheffield first enrolled at Shorter in 1961 but left without a diploma in 1965 because his own daughters were soon to enter college. On Friday, the 88-year-old completed his journey and received his Bachelor of Science degree in Christian Studies. As soon as his name was announced, the crowd erupted with whistles and yells, and didn’t stop until he left the stage.

“It’s a thrill of a lifetime,” he said following the ceremony, while surrounded by family. “I finally made it.”

Sheffield is the first graduate of Shorter’s online degree program in Christian Studies.

“I didn’t care about having a diploma back then, but I’m getting my degree this time,” he said.

The retired pastor said he was inspired to complete his degree after reading a magazine article stating that senior citizens can often attend certain colleges and universities without paying tuition. He had left Shorter with 115 hours and came back determined to graduate. He said the Christian Studies faculty helped him to achieve his goal.

Also helping was his neighbor and technical assistant, Amanda Brannock, who helped him type his papers and enter online assignments after he wrote them by hand.

“I saw him write until his hands couldn’t write anymore, and I’ve seen him focus so hard to the point where his vision wasn’t normal,” Brannock said.

An early literacy teacher at a primary school in Lamar County, Brannock said she believes Sheffield is one of the hardest working students with a great work ethic. She also said he has been an inspiration to her as he has worked to achieve his goal.

“I moved to Georgia five years ago, and Horace was one of the first people I met here. He came to my home to talk to my family about accepting the Lord and becoming members of the church. It’s because of Horace I was able to see my husband and my son baptized,” Brannock said.

“When he approached me about going back to college, he said it was the only thing in life he had never finished, and he did not want to meet the Lord without that degree. He said he knew nothing about computers let alone own one. So I said, ‘Pop, I’ve got a computer and a printer, and I’ll get you internet. Let’s go for a ride.’ He gave me the gift of God in my husband and son; I could do no less than help him get an education. We are so proud of him,” she said.

Brannock walked beside Sheffield as he pushed his walker across the stage.

“We went in as a team, and we wanted to come out as a team,” she said. “I could not be more proud if it was my own degree.”

The majority of the Sheffield family gathered to celebrate his graduation, including his two children, five grandchildren, and 14 of his 15 great-grandchildren.

The eyes of Sheila Milner, his youngest daughter and graduate of East Rome High, welled up with tears in describing the overwhelming feeling of seeing her father cross the stage.

Jill Brazier, a granddaughter of Sheffield’s, said the whole experience of him going back to school has “been kind of surreal.”

Sheffield hopes to motivate people of all ages to get as much education as they can as soon as they can. He believes he is called to challenge people to raise themselves to a higher level.

A Facebook photo gallery of him wearing his cap and gown has gained hundreds of likes. In one photo, he is holding a sign that reads “With God all things are possible — Matthew 19:26.”

“I am living proof that you have no excuses,” he said.

Navalny says nerve agent was found 'in and on' his body

Liz Weston: Fear of bankruptcy holds too many people back

Work ramping up for Nov. 3 election in Polk County