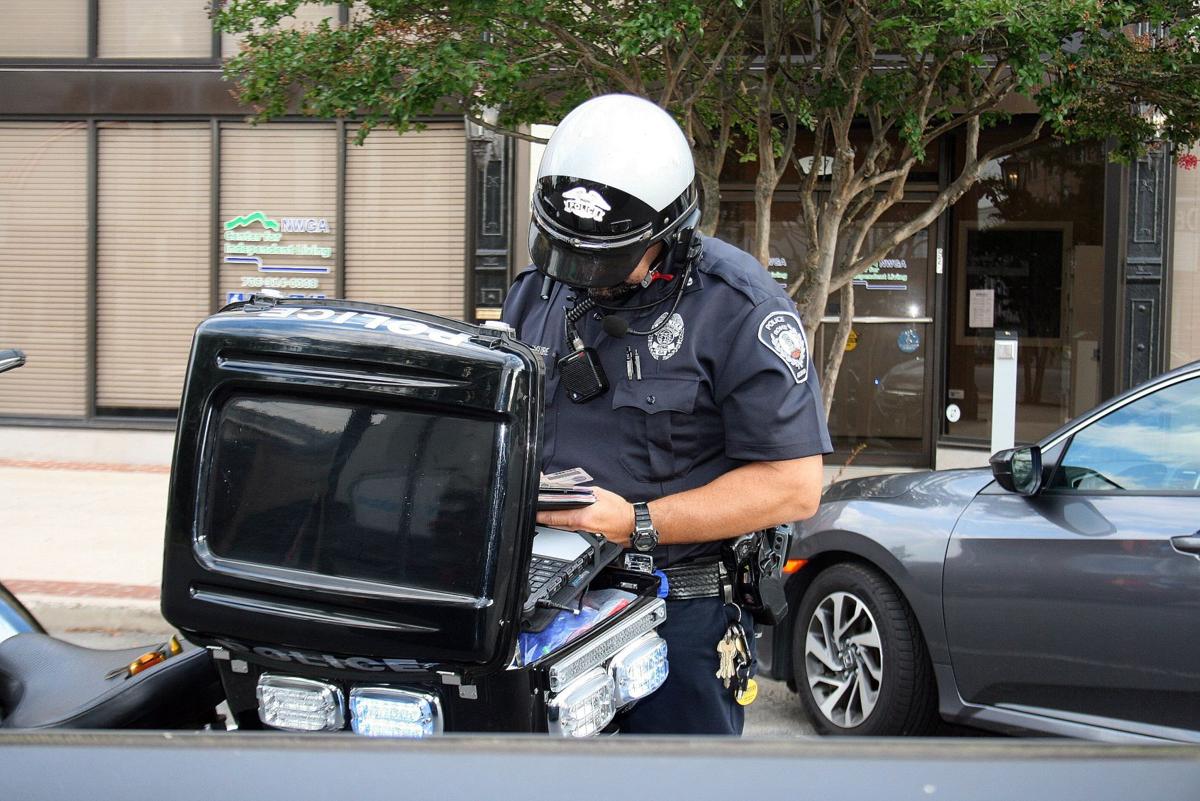 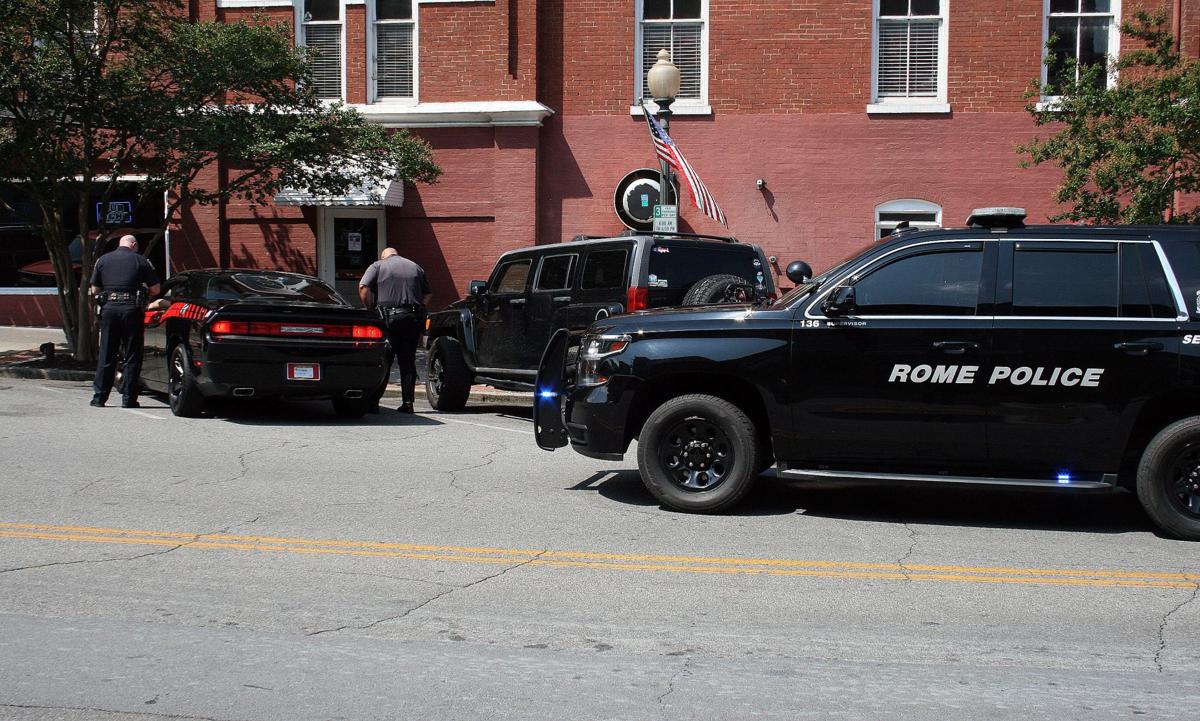 Rome police Capt. Chris DeHart (left) and Pfc. Matt Cowan approach a motorist stopped for speeding at Fourth Avenue and Broad Street on Friday. DeHart said he had made five stops before noon Friday but only wrote one ticket in the stepped up campaign to slow down traffic on Broad Street. 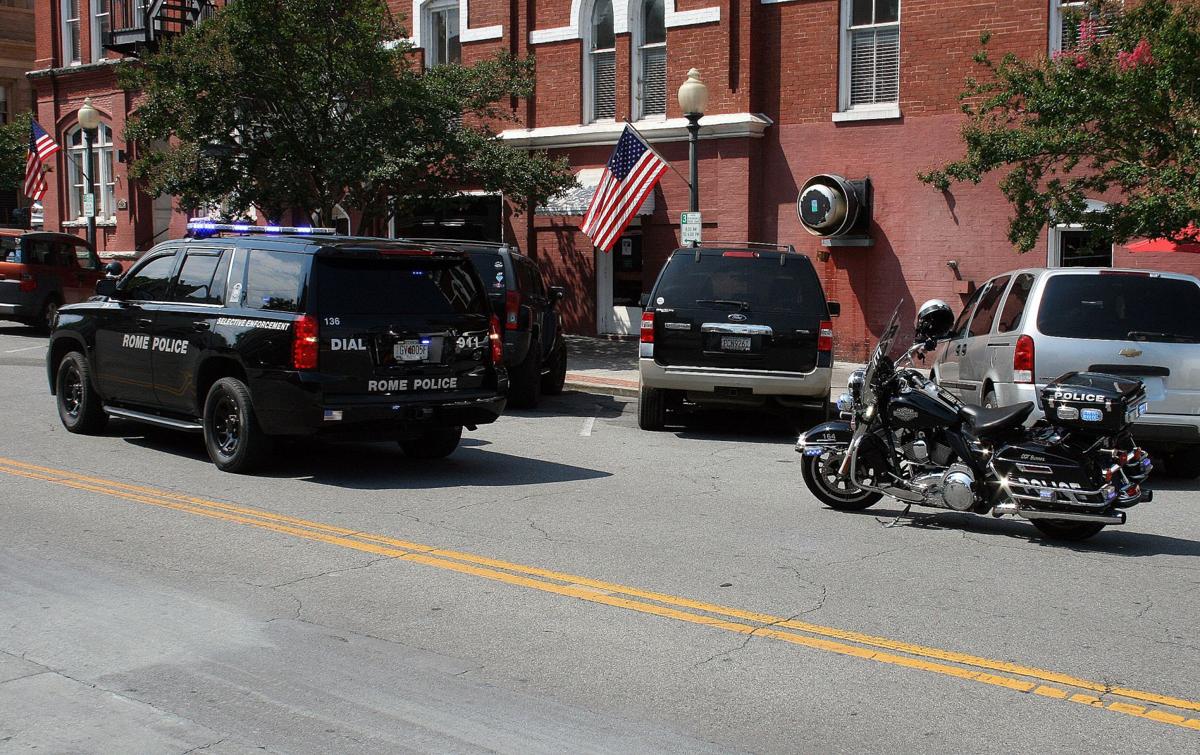 Two Rome police units were involved in a traffic stop at Broad Street and Fourth Avenue on Friday just before noon. Police are strictly enforcing the speed limit in downtown Rome in a concerted effort to slow down motorists in the area.

Rome police Capt. Chris DeHart (left) and Pfc. Matt Cowan approach a motorist stopped for speeding at Fourth Avenue and Broad Street on Friday. DeHart said he had made five stops before noon Friday but only wrote one ticket in the stepped up campaign to slow down traffic on Broad Street.

Two Rome police units were involved in a traffic stop at Broad Street and Fourth Avenue on Friday just before noon. Police are strictly enforcing the speed limit in downtown Rome in a concerted effort to slow down motorists in the area.

It was barely 9 a.m. Friday morning when Rome motorcycle patrol officer David McGuire had a motorist pulled over in the 500 block of Broad Street for speeding.

The city getting serious about stepping up enforcement of a wide range of violations — from speeding motorists to boisterous after hours noise on the streets downtown.

“Broad Street is our shining jewel,” said Mayor Bill Collins. “We certainly don’t want it to become a haven for crime, dragging and speeding, etc.”

Rome’s Public Safety committee held a special called meeting, without notice to the public or media, on Wednesday to discuss issues impacting the downtown business and residential district.

The mayor said city leaders simply want to make sure that Broad Street is safe for residents and visitors alike. “At some point time you have to act when you have a consistency with things that have been going on, people taking an opportunity to abuse what it is,” Collins said.

Downtown residents and business owners also weighed in on the topic.

“You can’t just let things build and build and then all of a sudden say let’s crack down,” said Harry Brock, a longtime downtown business owner. “Why not just keep it under control?”

Collins said he feels like most of the problems are as much a nuisance issue as a crime issue. City Manager Sammy Rich said what the city is dealing with downtown are largely nuisance issues.

“Any time you’ve got an environment where people come to re-create and where people want to live, you’re always going to have a clash,” Rich said.

However, Rome Police Chief Denise Downer-McKinney pointed out that speeding is a crime.

“It’s just time for us to do some enforcement,” Downer-McKinney said. She said for years, the city dropped the speed limit on Broad Street to the point that police were not able to use radar to enforce it. The city reversed that some time ago and now the speed limit is more easily enforceable.

By noon Friday, RPD Capt. Chris DeHart, head of the Selective Enforcement Unit, had stopped five motorists but only wrote one ticket.

He said because downtown is a historic district it can be treated like a school zone.

“We’re stopping people at five over the speed limit (which is 25 mph on Broad Street) but the officers are only writing tickets for the most egregious violations,” said DeHart.

It all comes down to safety — the goal is to make drivers aware of heavy pedestrian use and the importance of obeying the speed limit.

Maj. Rodney Bailey said he got a complaint Thursday from the husband of a woman who got a ticket for doing five miles per hour over the speed limit.

When Bailey explained that she was actually doing 36 miles per hour, 11 over the limit, and the officer dropped it down to 30 for the purpose of the ticket, the man eased off a little.

“At the end of the day, if this leads to some other conversations about how we can make downtown more pedestrian-oriented and less about a thoroughfare maybe that will take in a new direction,” Rich said.

Brock mentioned that Athens had actually created a “no cruising” district downtown, something that Rich said he would look into before the committee meets again.

The police department is currently short 13 officers making it virtually impossible for the chief to have foot or bike patrol officers solely in the Broad Street community.

The chief said the officer shortage problem is a combination of pay along with the current situation confronting all law enforcement.

“You have to have a heart to do this job and to be in this profession,” she said. “Right now, in these times, this is not what people want to be.”

When it comes to the loud noise issue, the police chief said that the ordinance can be a challenge to enforce and that while police do get a lot of calls — they generally try to give people the benefit of doubt and issue a warning.

“If people don’t adhere to that warning we will cite them,” the chief said.

Drop in US jobless claims offers hope for battered economy