Georgia state troopers stand guard in front of the State Capitol building on the first day of the 2021 legislative session in downtown Atlanta, Monday, Jan. 11, 2021. 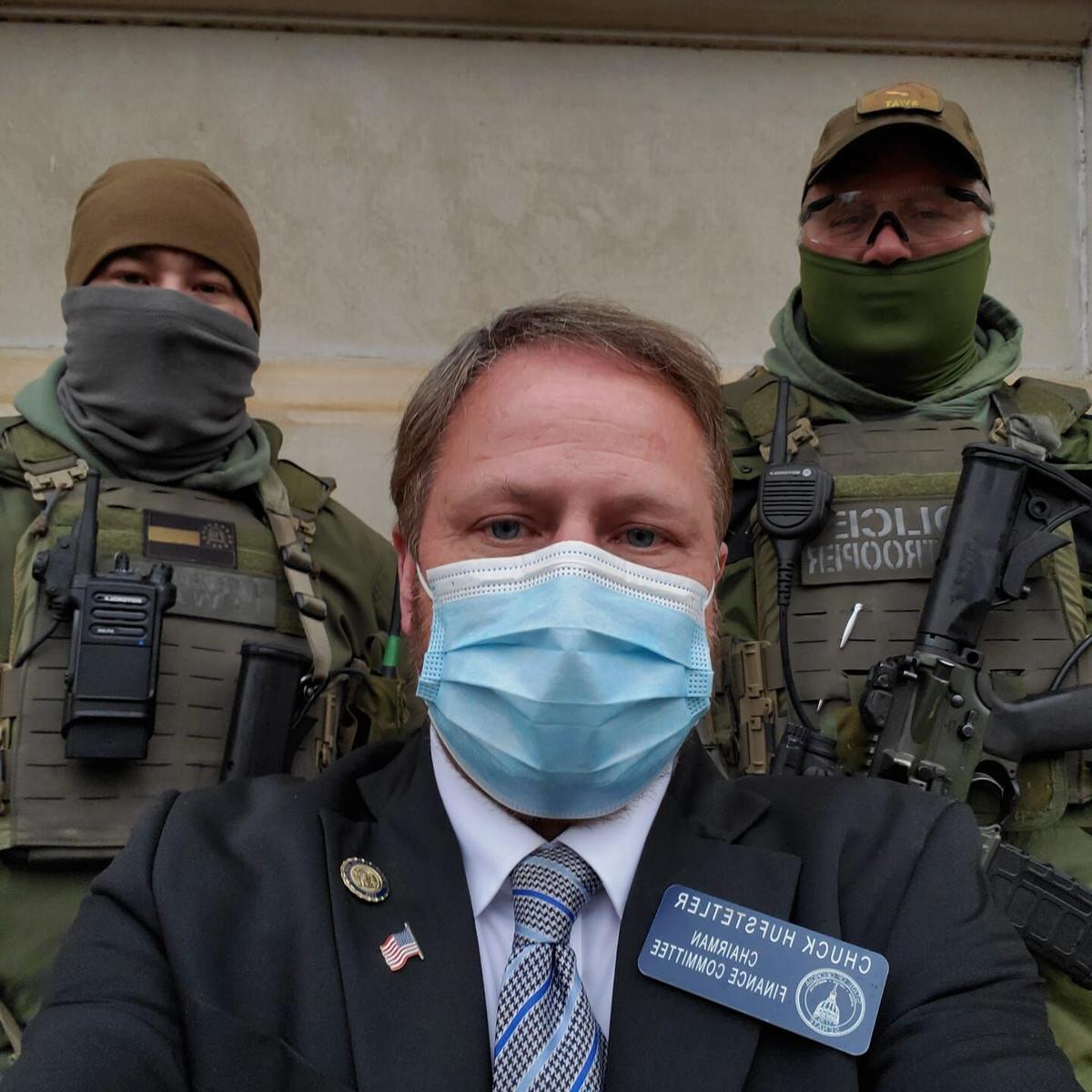 State Sen. Chuck Hufstetler, R-Rome, takes a selfie Tuesday with some of the Georgia State Patrol troopers providing security at the State Capitol on Tuesday, Jan. 12, 2021.

Georgia state troopers stand guard in front of the State Capitol building on Monday, Jan. 11, 2021. State capitols across the country are under heightened security after the siege of the U.S. Capitol last week.

Georgia state troopers stand guard in front of the State Capitol building on the first day of the 2021 legislative session in downtown Atlanta, Monday, Jan. 11, 2021.

State Sen. Chuck Hufstetler, R-Rome, takes a selfie Tuesday with some of the Georgia State Patrol troopers providing security at the State Capitol on Tuesday, Jan. 12, 2021.

Georgia state troopers stand guard in front of the State Capitol building on Monday, Jan. 11, 2021. State capitols across the country are under heightened security after the siege of the U.S. Capitol last week.

Sen. Chuck Hufstetler, R-Rome, chairs the Senate Finance Committee. He was among the chamber’s power brokers singled out in an Atlanta Journal-Constitution pre-session report.

“An anesthetist, Hufstetler rose quickly after being elected in 2012 and runs the committee that considers tax legislation and is one of the most active late-session panels at the Capitol. He’s been involved in a wide range of issues, including health care and ethics, and he hasn’t been afraid to stand against his Republican colleagues on issues,” the report noted.

Sen. Jeff Mullis, R-Chickamauga, maintains control of the Senate Rules Committee, which determines which pieces of legislation make it to the floor for a vote. Mullis also is listed in the AJC report on “Who’s Who At The Gold Dome.”

“These committee chairs are uniquely qualified to develop real and lasting solutions aimed at building a better Georgia,” Duncan said in a release. “The Senate will continue to prioritize diligent committee work and sound public policy, and I look forward to working closely with each one of our chairs, and their committee members.”

While senators typically keep their committee assignments unless they request a change — Hufstetler sought and was given a seat on the Rules Committee this year — there were a few shake-ups.

Two of the members who launched the most vocal attacks on Georgia’s election security this winter lost their chairs.

Sens. Brandon Beach, R-Alpharetta, and Burt Jones, R-Jackson, were among the four who clamored for a special session to investigate President Donald Trump’s false claims of election fraud. Sens. William Ligon, R-Brunswick, and Greg Dolezal, R-Cumming, also continued the push after being rebuffed by Gov. Brian Kemp and Duncan.

The senators held special committee hearings in early December that featured Trump attorney Rudy Giuliani presenting testimony that had been rejected — or omitted from lawsuits he filed — in courts around the country.

Ligon did not run for reelection and Dolezal, who took office in 2019, had no leadership position to lose. Beach, however, was not reappointed to chair the Transportation Committee and Jones no longer heads the Insurance and Labor Committee.

Sen. Dean Burke, R-Bainbridge, was named chair of the Labor Committee. He previously served as vice chair of the Health and Human Services Committee.

Sen. Frank Ginn, R-Danielsville, is the new chair of the Transportation Committee. He had chaired the Economic Development and Tourism Committee.

Kirkpatrick’s Ethics Committee gavel went to Sen. Max Burns, R-Sylvania., This is Burns’ first year in the State Senate but he is a former U.S. Representative who served in Congress from 2003 to 2005.

‘They gave oxygen to a lie’

Meanwhile, Capitol Beat News Service reported that Democratic lawmakers in the Georgia Senate have introduced a resolution condemning the riot by supporters of President Donald Trump at the U.S. Capitol last week.

The resolution also criticized the Republican state senators for holding “sham hearings” in December that gave a platform to election fraud claims spread by Trump and his allies, “delegitimizing the Senate and giving credibility to these conspiracy theories,” the resolution said.

State Sen. Jen Jordan, D-Atlanta, called on Tuesday for them to be held accountable for acting to agitate Trump’s supporters, saying on the Senate floor they “aided and abetted the spread of disinformation.”

“They gave oxygen to a lie,” said Jordan, who faced death threats for challenging the fraud claims at the hearing. “To pretend like nothing happened, that this is just another day … that can’t be an option.”

The Republican state lawmakers on the Senate Judiciary Subcommittee released a report last month calling the Nov. 3 election “chaotic” and saying that “any reported results must be viewed as untrustworthy.”

Proposals to change Georgia election laws including tighter voter ID requirements and limits on who can cast mail-in ballots look to feature prominently in this year’s session after Biden became the first Democrat to carry Georgia since 1992 and Democrats flipped the state’s two Republican-held U.S. Senate seats last week.

Beau Evans with the Capitol Beat News Service contributed to this report.

COVID-19 vaccine rollout creeps ahead in Georgia amid limited supplies