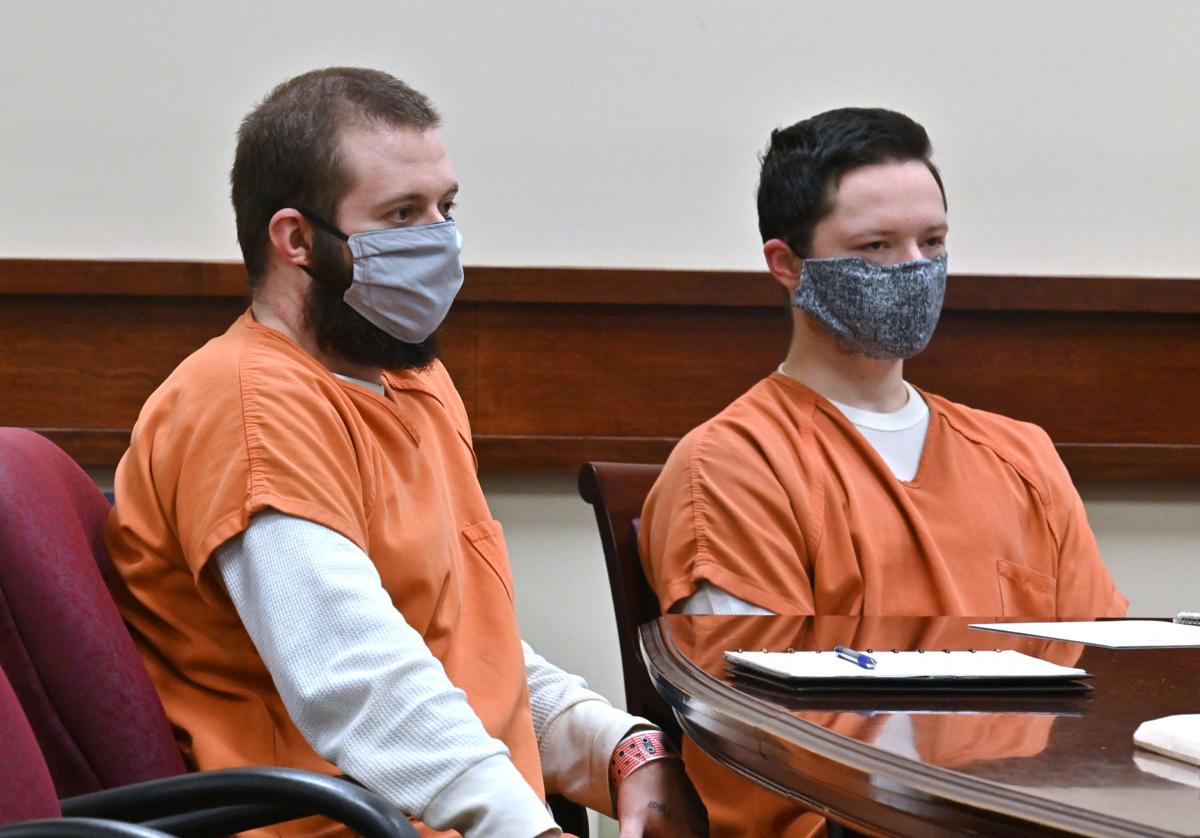 Michael Helterbrand (left) and Jacob Kaderli sit with their attorneys Radford Bunker and John Lovell (both not pictured) during their preliminary hearing before Judge Jack Niedrach at Floyd County Superior Court in Rome on Friday. 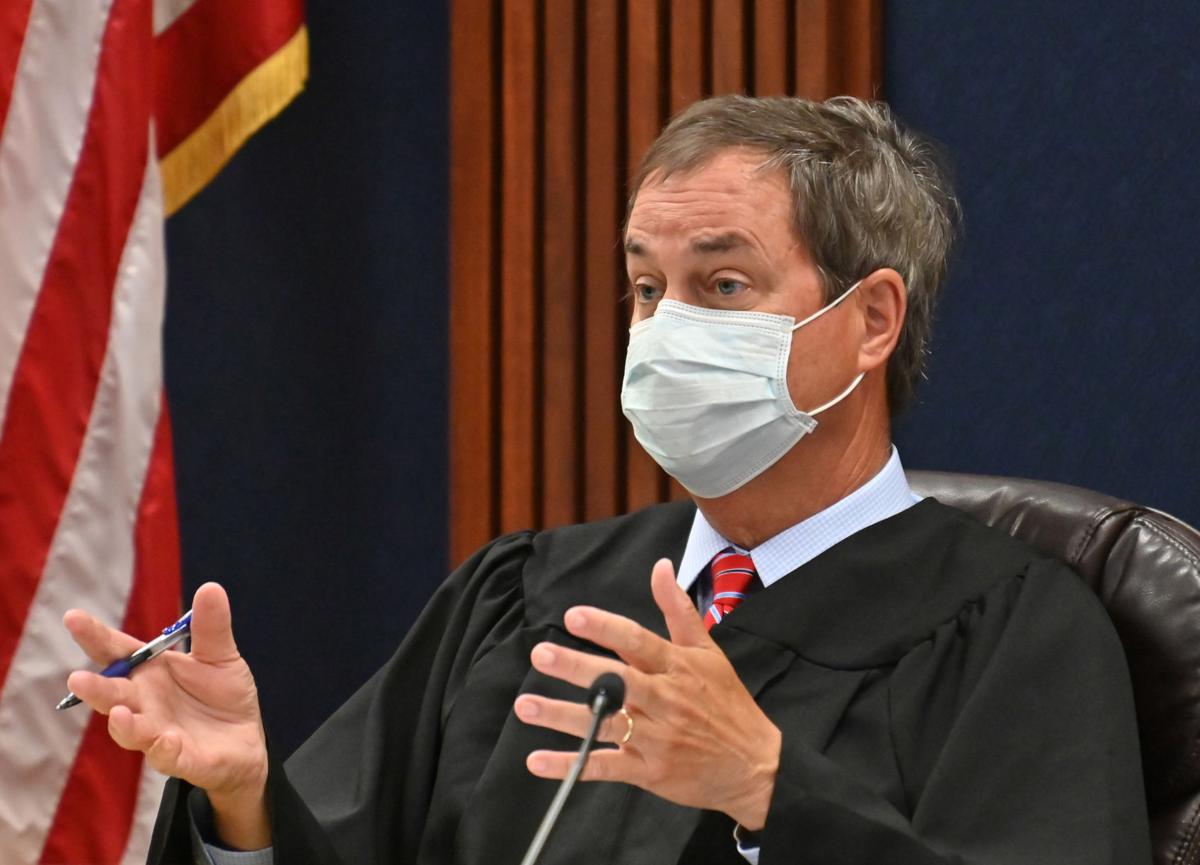 Judge Jack Niedrach speaks during a preliminary hearing for Michael Helterbrand and Jacob Kaderli at Floyd County Superior Court in Rome on Friday, May 29, 2020. 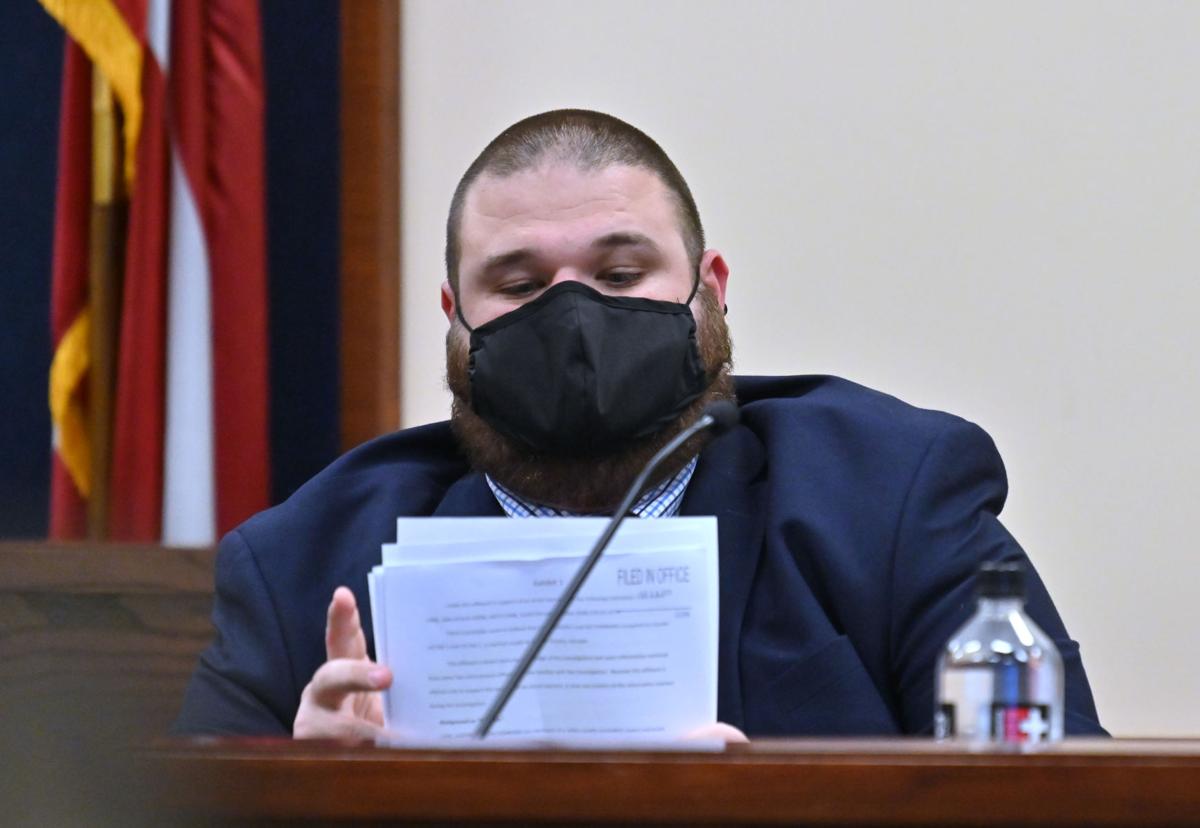 Michael Helterbrand (left) and Jacob Kaderli sit with their attorneys Radford Bunker and John Lovell (both not pictured) during their preliminary hearing before Judge Jack Niedrach at Floyd County Superior Court in Rome on Friday.

Judge Jack Niedrach speaks during a preliminary hearing for Michael Helterbrand and Jacob Kaderli at Floyd County Superior Court in Rome on Friday, May 29, 2020.

The case against three men accused of participating in a conspiracy to murder a Bartow County couple to further their white supremacist group’s goals will go forward.

Floyd Superior Court Judge Jack Niedrach listened to almost two hours of testimony Friday before ruling there was probable cause to continue the case against Jacob Kaderli of Dacula and Michael Helterbrand from Dalton.

They are both charged alongside Luke Lane from Rome with conspiracy to commit murder and participation in gang-related activity.

The only witness to testify during the two-hour hearing was Floyd County Police Department Sgt. Matthew Meyers who signed off on documents that resulted in a judge issuing a warrant for the arrest of all three suspects.

None of the three men have been arraigned or indicted yet and are being held in the Floyd County Jail without bond. Kaderli’s attorney John Lovell and Helterbrand’s lawyer Radford Bunker each indicated that their clients intended to plead not guilty to the accusations.

The charges stem from allegations that all three were involved with The Base, a “white, racially motivated violent extremist group,” Meyers testified.

During Lovell’s cross examination of Meyers, he asked the investigator if the victims were white and Meyers said yes.

The local investigation began in July of 2019 after an undercover agent infiltrated the group, and much of the testimony centered on each defendant’s role in the alleged conspiracy.

Meyers testified that it was Kaderli’s idea to burn the couple’s house down after the murders. Helterbrand was supposedly going to supply a solvent trap, to mitigate any noise from the shooting. He was also going to supply bags to capture spent shell casings so there would not be any evidence left behind.

Meyers also testified the defendants met at Lane’s home in Silver Creek 10 to 12 different times to discuss the plot.

Lovell asked the detective if Kaderli was present for any meeting after mid-December.

“No sir, he did not, but he did participate in some conversations I believe,” Meyers said.

In one of those conversations, the men had a discussion of whether or not the couple had children at the home. Meyers testified that Helterbrand responded, “I wouldn’t mind killing commie kids.”

During closing arguments, Lovell conceded the state had probably met the relatively low threshold for evidence in a probable cause hearing. He then asked Judge Niedrach to reconsider bond for Kaderli, because there was no direct evidence of his client’s involvement for a month prior to the arrests in mid-January.

All three of the men have participated in two bond hearings each, and were denied bond in both hearings.

Floyd County Assistant District Attorney Emily Johnson said she was not prepared to argue bond during the hearing Friday, but said she had evidence of a conversation involving Kaderli where he said would flee if he was allowed to get out of jail. She agreed to provide a copy of that statement to Lovell.

After Lovell’s concession regarding probable cause, Johnson argued that there was evidence that Helterbrand, “was a proud member of The Base, that he did a drive-by (of the victim’s home) and said he would kill commie kids.”

Niedrach said he would take Lovell’s request for bond under consideration but did not anticipate another formal hearing on the bond issue.

Tom Leonard, superintendent of Westlake schools, to retire in January 2023

Why are Florida stone crab prices so high this season?

Local colleges: WPI men's soccer standouts kick in from all over

Worcester urged to prosecute those responsible for vandalizing Columbus statue

"It's time for us to be an example": Holly Springs mayor takes stance against civil asset forfeiture

Deputies: Man shot at a truck while driving in Cherokee County