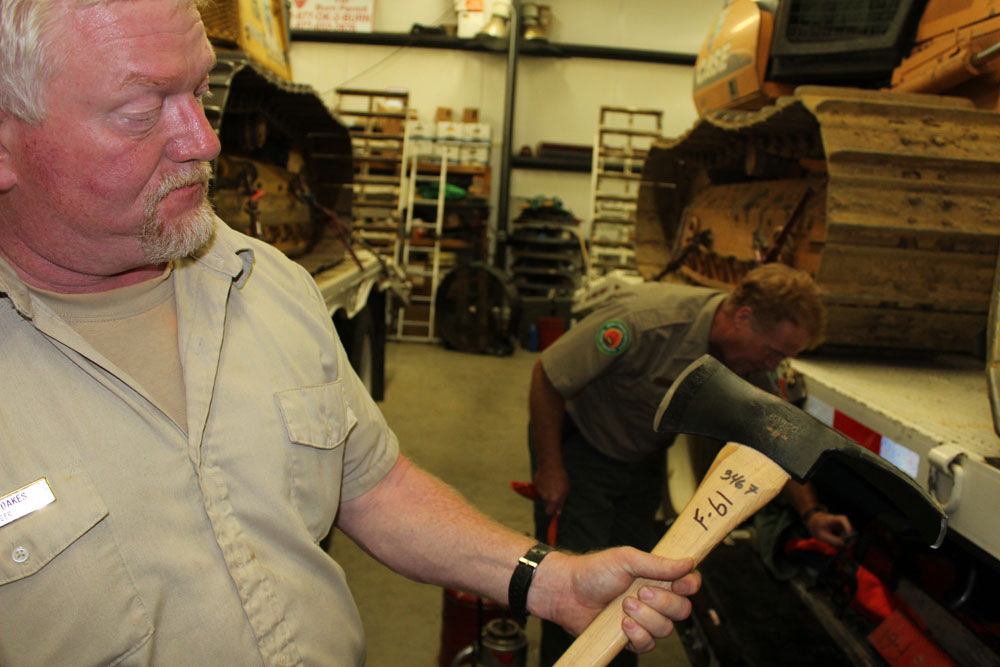 Georgia Forestry Commission Ranger Nathan Oakes, of the Floyd County unit, explains the usage of a pulaski in cutting through roots for forging a fire break. (Spencer Lahr / Rome News-Tribune) 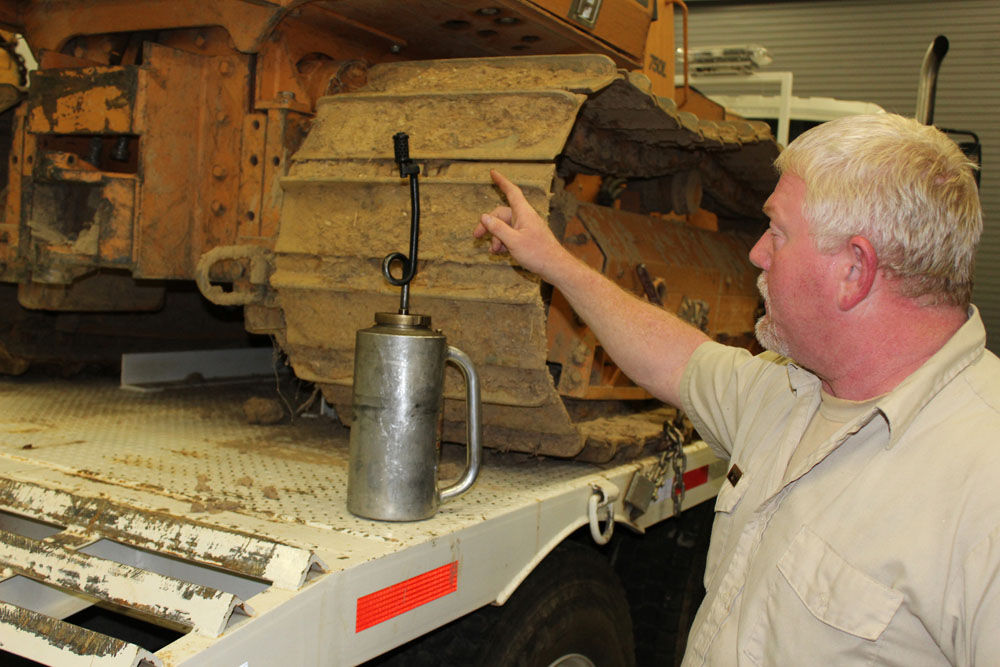 Georgia Forestry Commission Ranger Nathan Oakes, of the Floyd County unit, explains the usage of a pulaski in cutting through roots for forging a fire break. (Spencer Lahr / Rome News-Tribune)

Georgia Forestry Commission Ranger Nathan Oakes learned from his father not to play with fire.

“I remember my old man cut all the honeysuckle bushes down and threw them in a barrel and poured gas on it, went inside to get a match and when he came back ‘poof,’” said Oakes, a ranger for the forestry commission’s Floyd County unit.

Oakes said his father “burnt all his hair off his head, burnt his fingers and had them all bandaged up, (and) only had two fingers sticking out for smoking a cigarette.”

“So, I was never a big firebug as far as that goes,” he added.

In 2004, after 20 years in the Air Force, Oakes needed a job. With his love for the outdoors trumping the forewarning of his childhood memories, Oakes began a career fighting fires.

Stacy Cantrell had a safer relationship with fire growing up, starting prescribed burns on his family’s farm. His upbringing and involvement with the outdoors attracted him to becoming a ranger in Floyd County.

Even with a lack of precipitation in May, only two wildfires have broken out in Floyd County. The fires burned a total of four acres on Banks Mountain, south of Cave Spring.

Floyd’s wildfire numbers, to date, may be low but that doesn’t mean Oakes and Cantrell haven’t been busy. The two were dispatched to separate wildfires May 28 and June 2 in Whitfield and Walker counties.

Mike Brunson, chief ranger of the Floyd and Chattooga County units, said that because of state budget cuts to the forestry commission in 2010, forestry districts went to six from 10.

Brunson said this means “many county units have combined,” leaving forestry units to do more with less.

Each county is allotted so many rangers based upon the amount of wooded acres within its borders. Floyd County’s acreage totals 190,468, the Georgia Forestry Commission website stated, which leaves their unit with three rangers plus a chief ranger.

So when a wildfire breaks out in neighboring counties, Oakes said they “help their brothers out if they need it.”

On May 28, Oakes was called to Dug Gap, west of Dalton off Dug Gap Battle Road, in a relief capacity. Oakes joined a crew of 10 men divided into a four man hand crew of rangers from Gordon, Chattooga and Polk counties.

Hand crews are typically staffed with 20 rangers, but Oakes echoes the mantra of doing more with less.

By 8 a.m. Oakes’ crew took the north end of the rocky, sloping terrain of the gap.

“Our job basically was to start the north line, take it down to bare dirt with a pulaski, which looks a lot like a pick axe and a mattock, and three fire rakes that are about 18 inches wide and have four metal teeth and sharpened edges where it will cut roots,” he said.

Oakes was establishing a fire break, which is a trench created to contain the flames.

Oakes never saw the fire, only smoke plumes, but he saw plenty of rocks.

“I heard ‘rock’ so many times when we were coming down that mountain it wasn’t even funny, and I yelled it more than a thousand times I figure to just let the guys below you know that you’re shaking something loose,” he said.

Throughout the day helicopters crews made water drops and plane flyovers surveyed the fire.

An aerial vantage point has its pros and cons Oakes said.

“In areas like this, the plane is a great asset as far as being able to get you closest to where the fire is.”

A pilot may be able to spot a fire but not the specifics of the nearby terrain.

Setting a fire break can be done by a bulldozer with a tractor plow attached, but when terrains slope and get rocky their ability is limited. Even if a dozer can get into sloped areas, it won’t be able to back up a mountain or properly maneuver on rock to get its back blade deeper in the soil, Oakes said.

So it’s up to hand crews to more extensively trench the fire break, which is what Oakes did for 8 hours.

After 18 hours of work, Oakes ended his day. The fire was all but wrapped up by 4 p.m. the next day. What started as an 8 acre fire finished with 43 acres burned.

Safety during wildfire fighting is always in mind. Not just for the health of each ranger, but the resources it depletes in treating someone.

“You have to think that in the places that we worked, if you were to twist your ankle it would pull other resources off the fire to get you out of there,” Cantrell said.

Cantrell took off June 1 in a type six engine fire truck in response to a fire at Camp Adahi, 125 Camp Adahi Road, Menlo, in Chattooga County.

“Somebody had left a campfire unattended,” Cantrell said. “The fire trailed on out of that and it was only about 15 feet from the 600 foot side of the mountain and it fell of.”

However good one’s intentions may be when having a campfire, it doesn’t mean they’ve prepared for all that can happen. Simple things like raking away material to checking the weather are often neglected.

“As far as the irresponsibility of people, they’re all over the place,” Oakes said.

When not fighting fires Oakes and Cantrell spread their knowledge, educating others on preventative measures and fire safety.

The Latest: Trumps appears to welcome crackdown on protests

Tear gas and burning cars in US cities as unrest continues