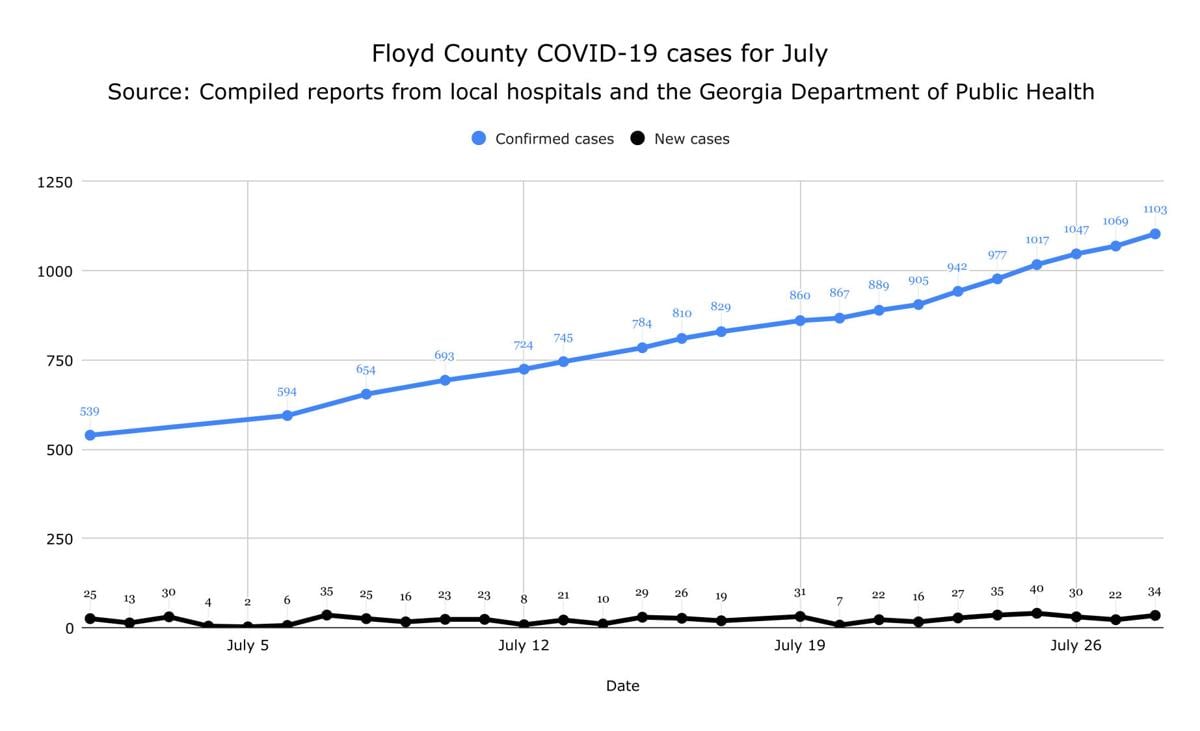 Floyd County COVID-19 cases have doubled in the month of July. There have been nearly 200 new cases reported in the past week alone. 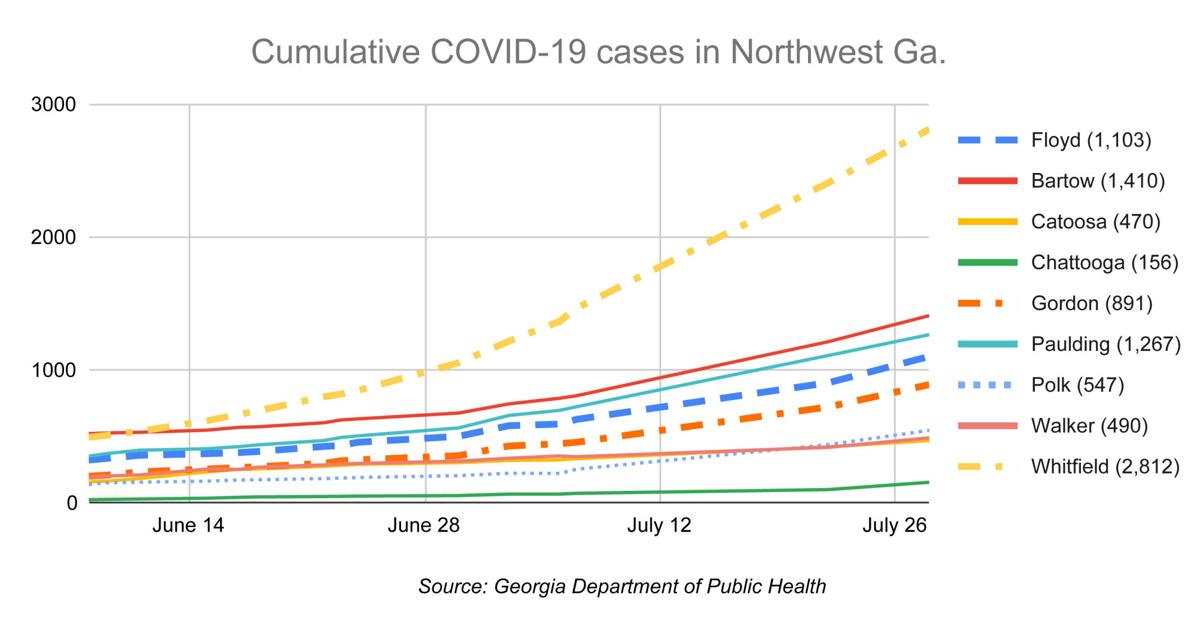 Floyd County COVID-19 cases have doubled in the month of July. There have been nearly 200 new cases reported in the past week alone.

Shortly after the coronavirus arrived in Georgia in March, the number of hospitalized people and fatalities ramped up. However, shelter in place actions taken locally and, later, by Gov. Brian Kemp slowed the spread of the virus and the number of people hospitalized to single digit numbers.

That’s no longer the case.

Local hospitals reported to the Floyd County Emergency Management Agency that 33 people were hospitalized at Floyd Medical Center and 20 at Redmond Regional Medical Center with COVID-19 on Tuesday. Those numbers aren’t counting those hospitalized who are awaiting test results.

Compare that with a month ago, on June 29, when 13 COVID-19 patients were hospitalized in Floyd County.

The number of deaths has not followed that trend and local healthcare leaders have previously attributed that to a better understanding of how the disease affects people and more tools to fight the disease. Floyd County hasn’t had a COVID-19 related death reported by the state since late May.

At a roundtable talk in Atlanta, representatives from the state’s largest hospitals and nursing-home associations detailed growing concerns over maintaining care and curbing infections due to tight finances, difficulty procuring test kits and health disparities in minority communities.

They laid out challenges with retaining hospital and nursing staff, receiving enough sanitization materials and keeping seniors in long-term care facilities from becoming depressed due to prolonged isolation as the virus continues battering Georgia.

More federal funds for health-care providers in a second round of coronavirus relief will be critical to fend off a large increase in positive cases and intensive-care hospitalizations over the past month, several hospital executives said Monday.

“Anything we can get is important because the financial burden, especially in hot spots, has been really tremendous on health-care centers and hospitals,” said Dr. Jonathan Lewin, president and CEO of Emory Healthcare in Atlanta.

Monday’s talk was hosted by Loeffler, R-Ga., and Seema Verma, administrator of the U.S. Centers for Medicare & Medicaid Services.

Loeffler, who has brought legislation to broaden insurance coverage for telemedicine, aims to focus on federal aid for schools, health-care providers and businesses as Congress hashes out another funding package.

State officials have helped increase staffing levels at around 50 hospitals and 70 long-term care facilities in Georgia via staff augmentation contracts since March, said Frank Berry, commissioner of the state Department of Community Health.

Keeping that extra support in place will be critical as the summer months wear on and hospitals face capacity issues as more patients are admitted, Berry said.

But positive COVID-19 cases and intensive-care hospitalizations are still climbing, sparking worries among hospitals and providers that health-care finances already pummeled by the virus since March could get worse.

“Our volumes are significantly higher in this wave than they were in the previous,” said John Haupert, president and CEO of Grady Health System in Atlanta. “What we’re very concerned about now is there is not a great compliance with social distancing and masking in our community.”

Nursing homes stumbled early in the outbreak due to lack of training in infectious-disease control measures and a severe shortage of tests that could help facility staff quickly isolate infected residents.

Many elderly residents are showing signs of weight loss and depression due to their isolation as long-term care facilities remain locked down across the state, said representatives from several nursing-home groups.

“We are identifying the need that they have to see each other,” said Deborah Meade, board chair of the American Health Care Association.

Verma, the federal Medicaid administrator, said her agency has started sending “point-of-care” test kits to nursing homes across the country to conduct COVID-19 tests for residents and staff inside facilities rather than off-site. Around 1,000 kits have already been sent, she said.

Verma called those kits a “game changer” that would help elder-care facilities curb infection rates so that residents can begin interacting with each other at a safe distance and potentially receiving visitors.

“This has been an incredibly difficult time,” Verma said. “I think the tests that we’re doing are really going to be that turning point and allowing for that reunification (with families), and allowing for them to have a better quality of life inside the nursing home.”

Those disparities could affect ongoing clinical trials for a COVID-19 vaccine, said several leaders. Minority communities have historically been under-represented in clinical trials and tend to express more distrust for the effectiveness of vaccines as a result.

Hurricane Alpha? Amped up season forecast, names may run out

Lack of study and oversight raises concerns about tear gas

'The way I do business is no longer valid': As businesses adapt to coronavirus, county aid a boon