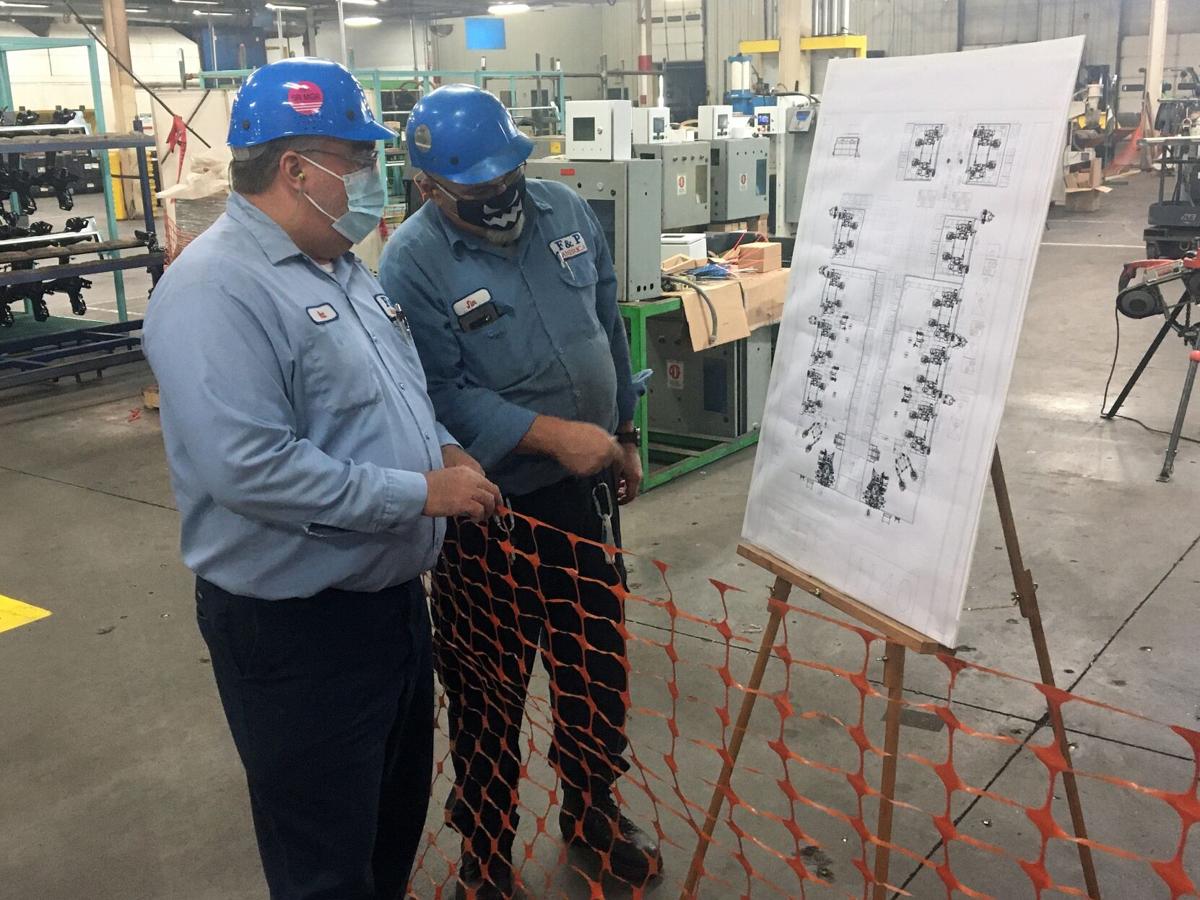 F&P Georgia Senior Manager Nat Massey (left) checks out schematics of two of the three new weld lines that are being added to the Rome plant to supply parts to another major automotive manufacturer. 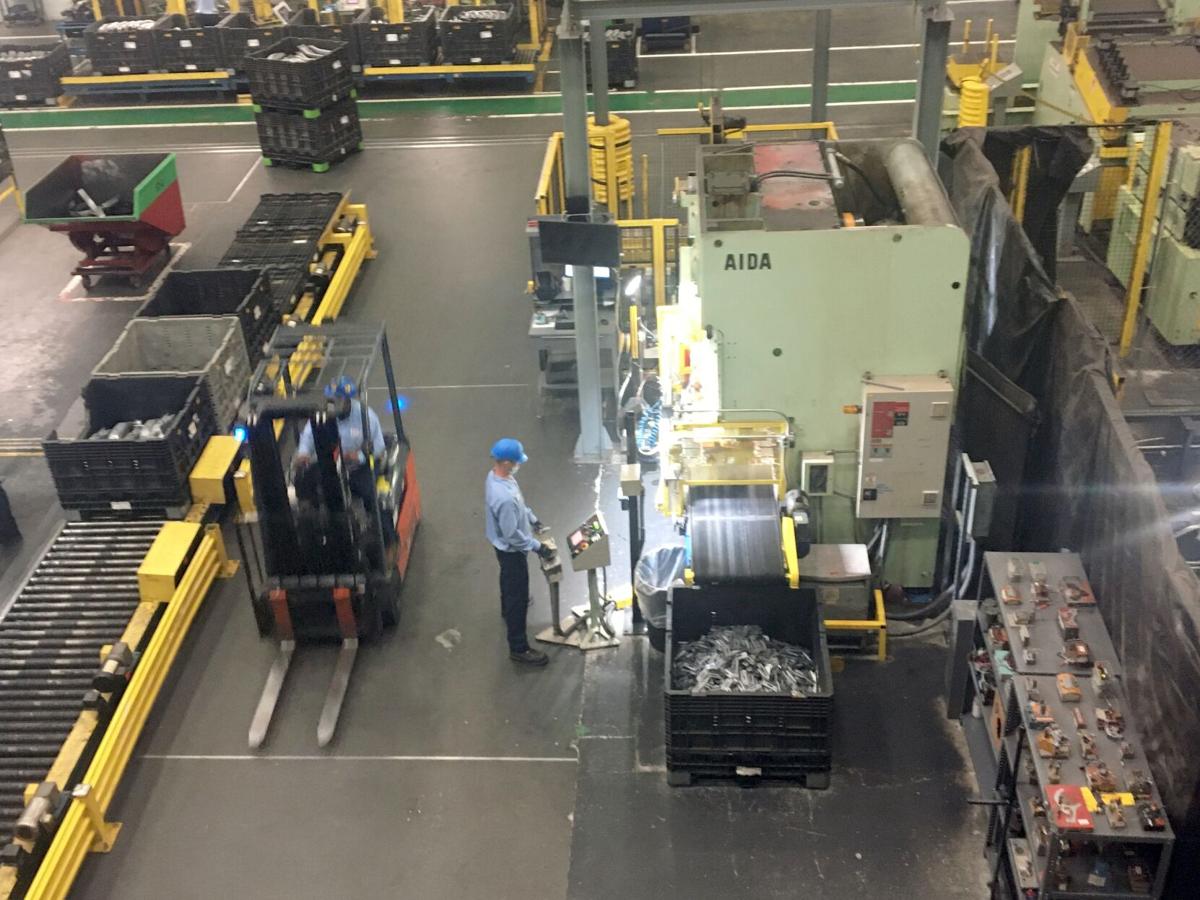 A look down onto the work floor inside F&P Georgia. The company will add a 400 ton progressive stamping press just to the right as part of a new $23 million capital investment. 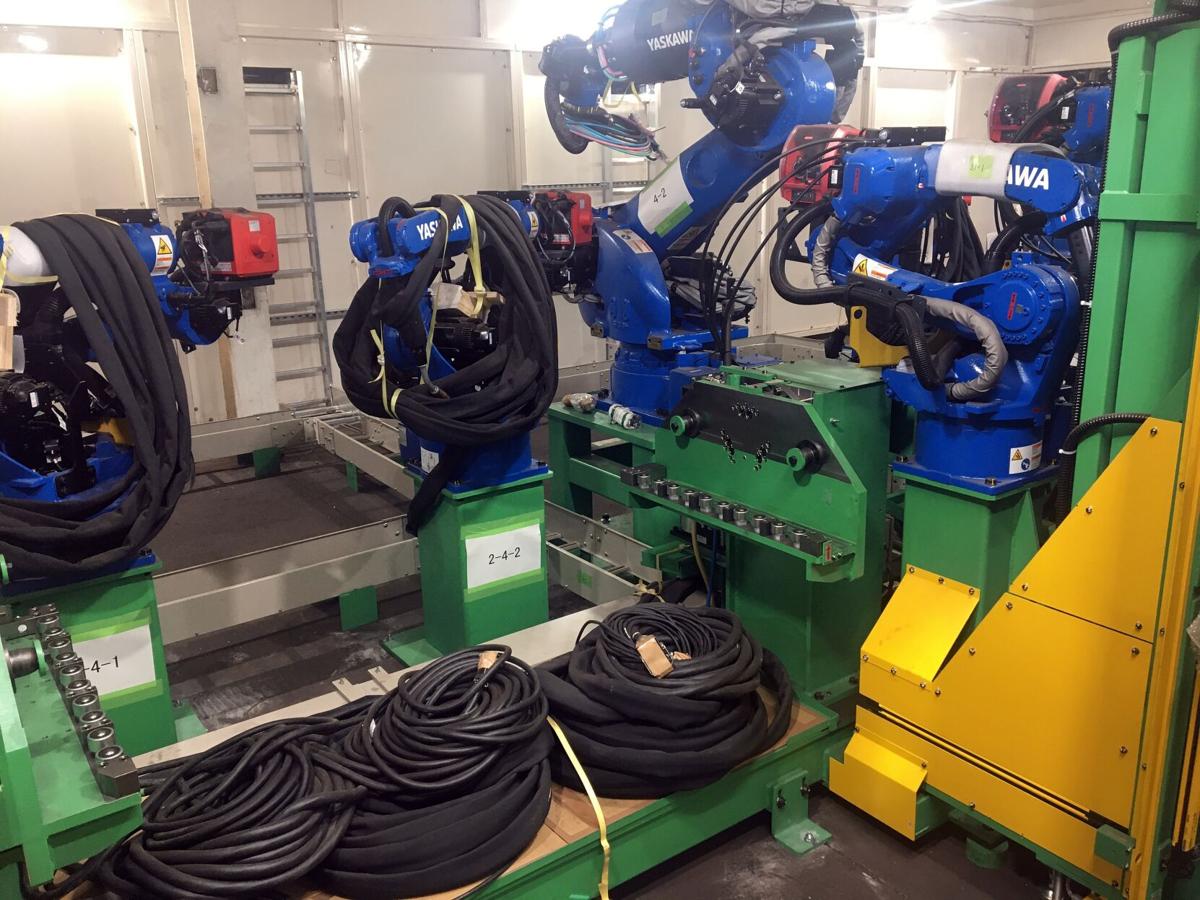 Equipment is ready to be installed Tuesday for one of the three new weld lines being added to the F&P Georgia plant in Rome.

The auto parts manufacturer in the Floyd County Industrial Park off US 27 South announced plans for growth over the next three years during a meeting of the Rome-Floyd County Development Authority on Tuesday.

The expansion will result in a $23 million capital investment and addition of at least 15 new jobs over three years.

“Rome and Floyd County have been a great home for F&P. We are proud to continue to grow our business here,” said Senior Manager Nat Massey. “We are also very thankful for the support of the people, government and Development Authority of Rome and Floyd County.”

F&P opened in Rome in 2001 with 70 employees and has already expanded five times, growing to more than 600 employees. The last major expansion occurred in 2012, when the company went into a second building in the industrial park. In 2014, it added another 50,000 square feet to that building.

The newest expansion will be to produce the front and rear subframe and other components for another automobile manufacturer. The company already is a major supplier to Nissan and Honda.

The project will involve three new weld lines along with a new 400 ton progressive stamping press.

A 10-year payment in lieu of taxes, also known as PILOT, tax abatement plan was approved for the project. F&P will receive a 100% tax break for the first three years, 50% for the next three years, 25% for three years and 10% for the final year of the package before paying full taxes on the upgrade.

The R-FCDA also huddled in a closed session with three representatives of another existing industry with plans for a possible expansion.

The company has been in Rome and Floyd County for about 30 years. An official with that industry said they still have some work to do on their end before corporate executives give the green light to move forward with the expansion.

The authority also gave its president, Missy Kendrick, the go ahead to submit an application the the U.S. Environmental Protection Agency for a $600,000 assessment grant.

The grant would help the authority, the city of Rome and Floyd County with choosing future industrial sites. The funds would be used to make sure there are no environmental issues related to the property.

Kendrick was also authorized to move forward with an application for a clean-up grant and revolving loan funds that could be used in the event contaminants are discovered on sites being considered for industrial expansion.

Money from the grant could be used only on sites owned by the development authority while the revolving loan could provide funding for local industries to address environmental issues on land that is privately owned.

Kendrick said that contacts with industrial prospects have slowed down somewhat in recent weeks, but she said that is not unusual for the period of time leading up to a major election.

Arrest records from the Saturday, Nov. 28, edition of the Calhoun Times