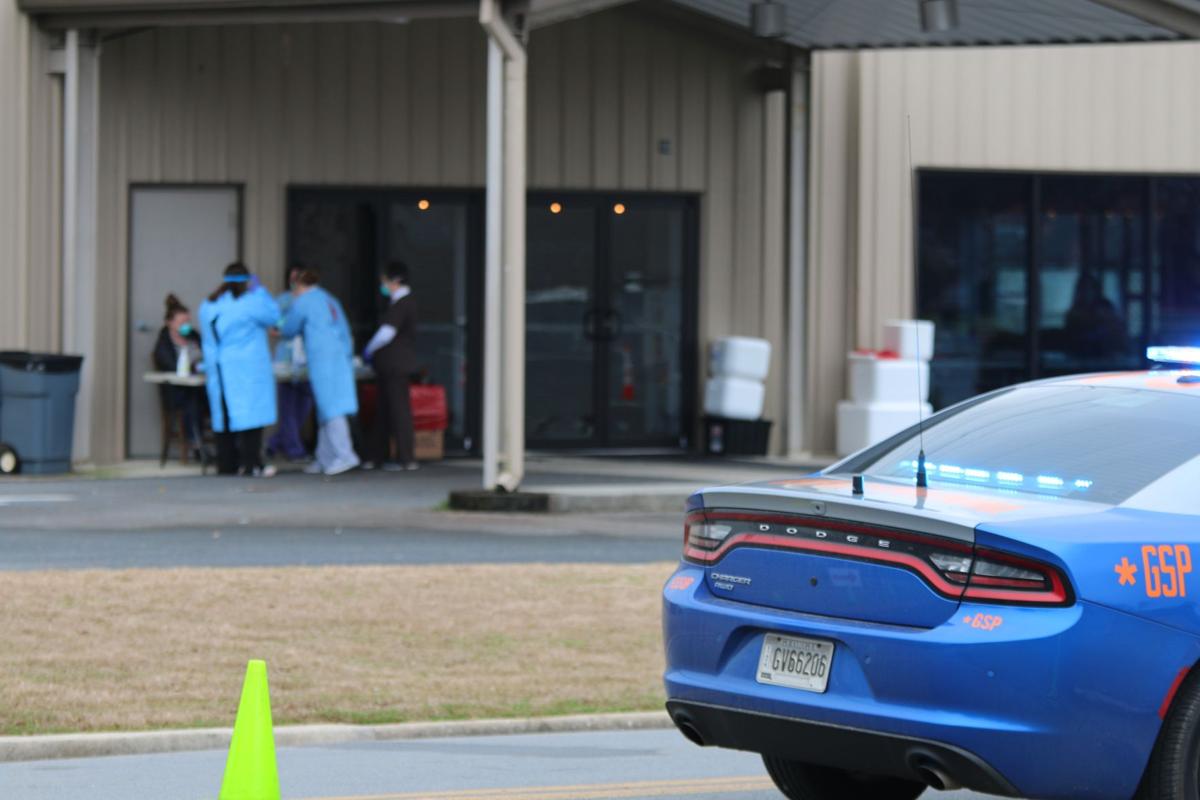 In this March 18 file photo, a Georgia State Patrol vehicle sits at the border of a temporary facility in West Rome set up to obtain swabs for COVID-19 testing. 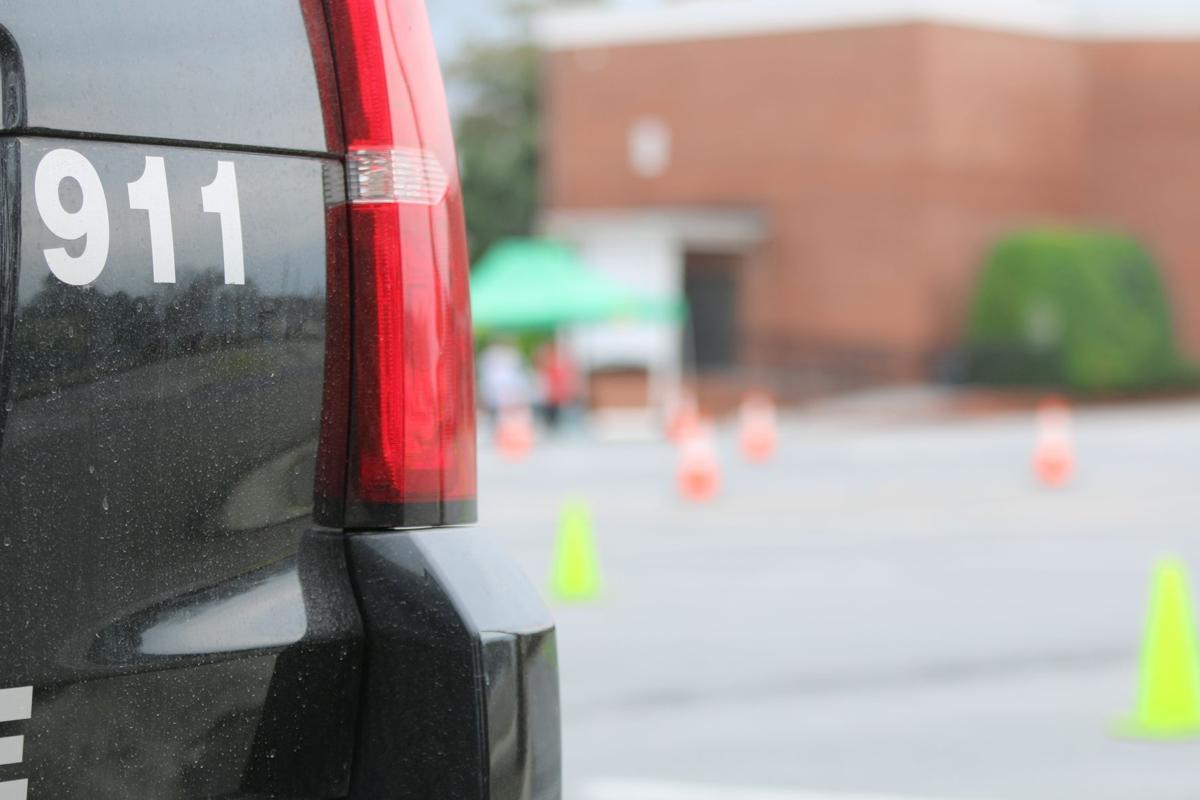 In this March 18 file photo, a Rome Police Department SUV sits at the border of an area cordoned off in West Rome as a temporary facility to obtain swabs for COVID-19 testing from pre-approved patients. 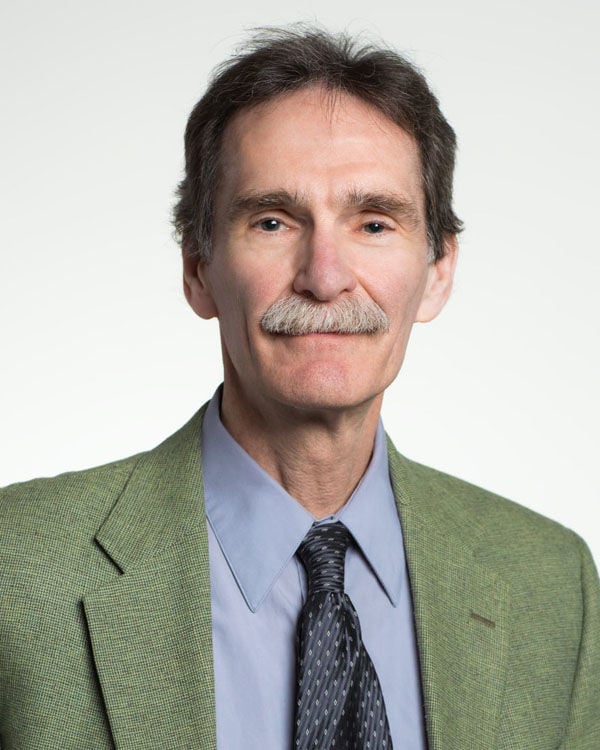 In this March 18 file photo, a Georgia State Patrol vehicle sits at the border of a temporary facility in West Rome set up to obtain swabs for COVID-19 testing.

In this March 18 file photo, a Rome Police Department SUV sits at the border of an area cordoned off in West Rome as a temporary facility to obtain swabs for COVID-19 testing from pre-approved patients.

Floyd County Coroner Gene Proctor has confirmed the identity of the woman who died from a COVID-19 related illness Thursday night.

Elizabeth Eugenia Wells, 65, a resident of an apartment complex off Woodrow Wilson Way in West Rome was admitted to Redmond Regional Medical Center on March 7 and tested for COVID-19 on March 12.

Her listed cause of death was respiratory failure from complications of COVID-19.

"Redmond confirms that one patient who tested positive for COVID-19, has passed," said the hospital's spokesperson Andrea Pitts ina statement. "Out of respect for the family and the privacy of the patient, we have no additional details to share. Our thoughts and prayers are with the family."

Members of the Church at Liberty Square posted on their Facebook page several memorials for Wells, who was a member of their congregation.

"This virus is no joke," Proctor said. "Anyone with a compromised immune system and over the age of 60 is in danger from this. They need to take all precautions to avoid this."

Two other members of the church, a Cave Spring Elementary employee and his wife, are recovering. The church choir Facebook page is filled with support for members who tested positive for coronavirus.

State epidemiologists earlier canvassed the Cartersville church regarding two Sunday morning services — March 1 and March 8. Another member of the church spoke on CNN last week regarding his condition.

"Hospital and healthcare leaders across Northwest Georgia are working collaboratively to respond to the increasing presence of COVID-19 in Northwest Georgia," a realease stated. "Following the guidelines from both the U.S. Surgeon General and the American College of Surgeons, effective immediately, AdventHealth, Cartersville Medical Center, Floyd Health System, Harbin Clinic and Redmond Regional Medical Center are beginning the process of rescheduling non-essential surgeries and procedures."

Surgeries and emergency procedures will continue uninterrupted, the release stated.

The move is also aimed at conserving resources as medical professionals are seeing a reduced supply of protective equipment.

"The elimination of nonessential and elective surgeries and procedures will also ensure the most time sensitive and medically necessary care can be prioritized and delivered quickly," the release stated.

Floyd County Schools announced today they would remain closed through April 10. At this point Rome City Schools are closed until April 6.

FCS has also canceled all field trips scheduled for the remainder of the school year.

"Details on refunds will be made available to families as soon as they are determined," said FCS spokesperson Lenora McEntire Doss in a release. "School-sponsored events will be postponed or canceled for the duration of the closures."

With the limited number of tests available for COVID-19, determining who to test is key.

“We are focusing on our highest-risk individuals, particularly the elderly and nursing home residents, as well as those who, if they had the virus, would dramatically impact many individuals in the entire community. These include healthcare workers, first responders, and teachers,” said Dr. Gary Voccio, the health director of the Georgia Department of Public Health Northwest Health District.

The first part of testing is the collection of swabs for those most at risk, the second is sending those specimens off to the Georgia Public Health Lab or a private laboratory.

“We wish we had more overall specimen collection and testing capability, and that’s coming, but right now, specimen collection for testing is only for people meeting specific criteria who have been evaluated by their physician and received an ID number,” Voccio said.

In the region, and in Rome, the agency has set up temporary collection sites for those fitting those criteria.

He stressed that they are not collecting specimens to test for the virus from the general community at this time. People will be referred to the DPH by their healthcare provider.

The number of people who test positive is increasing not only because of additional infections but also because there are more tests available.

The total confirmed positives for COVID-19 over the state — mostly concentrated in Fulton, Cobb, Bartow and DeKalb counties — was at 197 Wednesday.

Floyd County has six cases confirmed by the state, however since it’s a regional healthcare hub, people from neighboring counties often will come here for treatment.

Numbers of confirmed cases on the Georgia DPH website reflect the county in which a person is a resident, not necessarily where they’re receiving treatment.

Locally, there were five people receiving treatment as of 1 p.m. Wednesday who have tested positive for COVID-19. There were 34 people who had been tested but were awaiting confirmation from the CDC for verification of a positive or negative result.

One person who was being treated had transferred to another medical facility.

New cases are continuing to emerge. The U.S. District Court in Rome was closed Wednesday until further notice after a security officer was hospitalized after feeling ill.

The officer was on duty in the federal courthouse on the week preceding his hospitalization, the order stated, and during that period was feeling ill. The order stated that, since it will be several days before COVID-19 can be confirmed as the illness, the building will be closed until further notice.

The deaths brought the total number of known fatalities traced to COVID-19 to four in Georgia. A 67-year-old man with underlying health conditions died last week at Wellstar’s Kennestone hospital in Marietta.

In a news release, Phoebe Putney officials said 23 people had tested positive for the respiratory virus as of noon Wednesday while more than 400 others were awaiting the results of their tests.

“Unfortunately, more deaths are likely to occur, and we will certainly see more positive cases as we receive more test results,” Kitchen said. “We strongly urge everyone to heed warnings and practice proper social distancing. We need to do all we can now to try to slow the spread of the virus.”