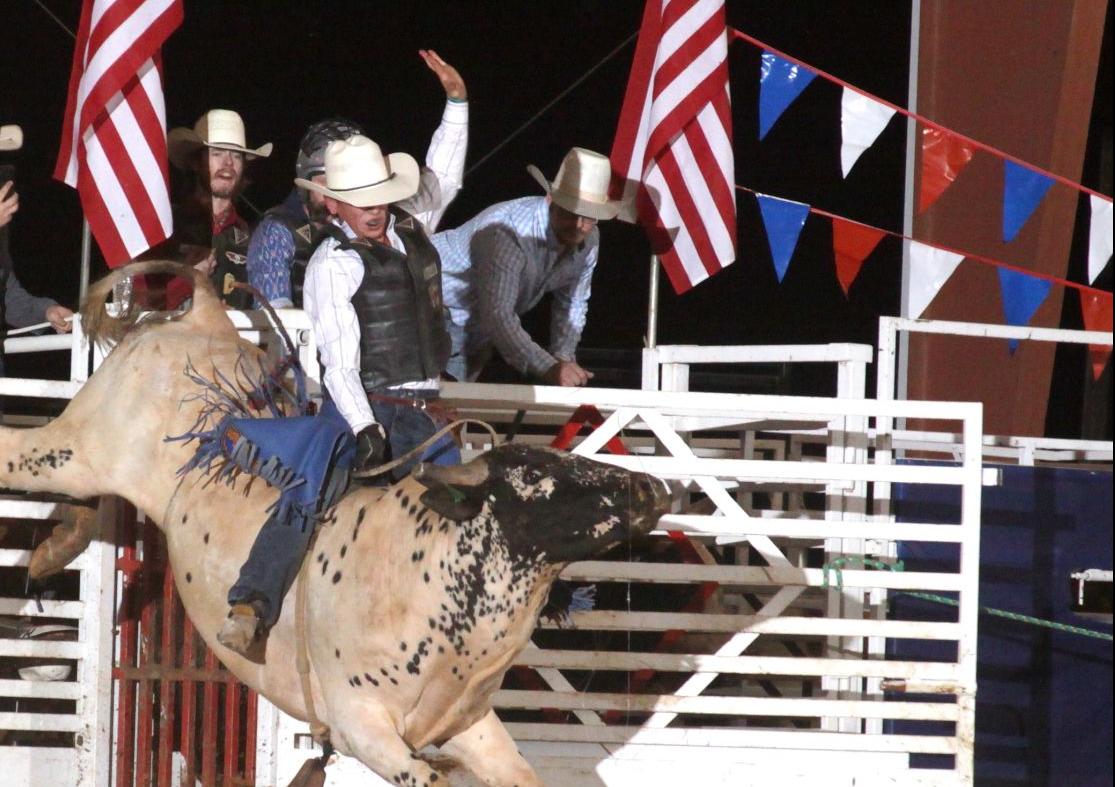 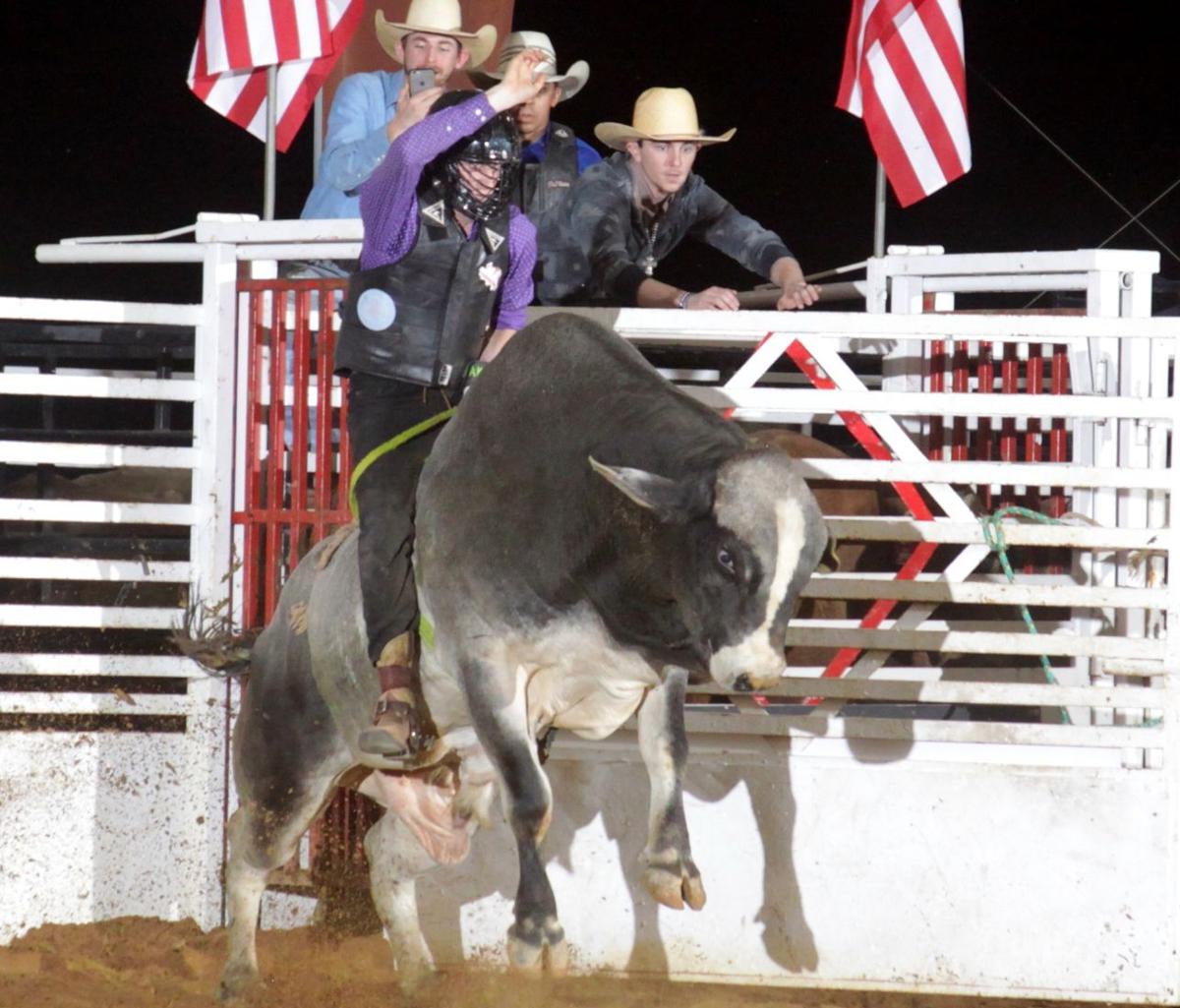 It’s been 11 years now since the first time a bull came tearing out of the chute under the lights in the Gunby Center arena on the Berry College Mountain Campus. Each year for one night the college welcomes cowboys ready to try their luck on bulls from the 4L & Diamond S stock contracting company out of Lyerly.

The event is the stuff of many a country song, with cowboys and bullfighters ducking oncoming horns and thousands of pounds of angry livestock after each brief ride is over.

“We buck a total of 30 bulls,” explains Kevin Ellis, Gunby Center barn manager and bull riding organizer. “There are 20 guys in the long round, and we bring back the top 10 scores for the short round and the best average score is the winner.”

The event utilized the Premier Bulls Tour for its cowboys this year and Zach Chesser of St. Augustine, Florida took home the high score to win the event.

This event is a departure — albeit a welcome one — for most Berry students, even those who work or play in some corner of the agriculture industry. The Gunby Center hosts Intercollegiate Horse Show Association events and animal science students visit the facility regularly for labs centered on horse health, but bringing in 30 bulls requires a bit of a different mindset.

The Berry College chapter of the National Block and Bridle Club puts on the event as a fundraiser, using 4L & Diamond S to pull off the contest each year.

“It’s our big event for the school year,” says club president Kyla Adams, a senior animal science major. “We have to have one that’s free for students.”

The club supports the bull riding by securing community sponsorship and selling tickets to the public. Adams says the event brought in about $1,500 for the club this year, and the arena was packed out with 1,000 attendees.

Each year, his crew works to transform the Gunby riding area from a horse arena to a professionally-arranged bull riding operation where cowboys can safely show off their talents. They bring in portable bucking chutes and fencing and transport the bulls from Lowry’s farm about a half hour northwest of Berry.

The bullfighters work in conjunction with rodeo clowns and announcers to keep the cowboys safe and the crowd entertained. This year, fighters Taylo Glass and George Austin worked together to distract the bulls. Rodeo clown Tim “Wild Thang” Lepard — also known as a barrel man in rodeo lingo — bantered with announcer David Sharp to keep the event afloat while cowboys took the time they needed to climb aboard their bulls in the chutes.

The show ground to a brief halt a few times when cowboys had bad falls, and Glass and Austin dodged would-be hookings from sharp horns as they ushered the still-bucking bulls from the arena. Ellis ducked inside the fence a few times to help the young men to their feet and escort them safely to an exit.

Ethan Ray, of Trion placed second in the contest with a score of 83 points on “Blackberry Winter,” a bull he’s ridden several times before.

“It went my way this time,” Ray said, laughing.

He works full time for 4L & Diamond S and attends dozens of rodeos and bull ridings with the company each year, setting up the events during the week and competing in them on the weekends. The Berry College bull riding is unique in that it’s close to home for Ray.

Second place actually ended up in a three-way tie this time, so Ray split the money. He participated in the very first Battle on the Mountain, and he was champion in 2013.

Ellis has played a significant role in making the event as big as it is today. It began as an invitational bull riding, and he helped get it off the ground by working his contacts from his career in the industry as a bullfighter. He spent nearly 20 years traveling the country distracting bulls so cowboys could exit arenas safely after completing their rides. He officially retired as a professional in 2012, but not before the students he supervised at the college got to see him in action. He participated as a bullfighter during those first few events on Mountain Campus.

“I was still rodeoing at the time, and I invited guys who had the credentials,” Ellis explains. “We wanted to match really good bulls with really good guys ... It all kind of started out being a fundraiser — just introducing a different area of the ag world to Berry College.”

The event began as the culmination of ag week and continued because of the positive response, he says.

“It has become an event that the students, staff and faculty all look forward to,” he says. “It allows people to see a different world, a different culture. Here are some cowboys competing, and they’re helping each other.”

Trump end run around Congress raises questions on his claims

Teens arrested on gun charges after police shoot at car

Man charged after toddler shoots shelf in head in Atlanta

New arrivals for the Wednesday, Aug. 12, 2020 edition of the Standard Journal