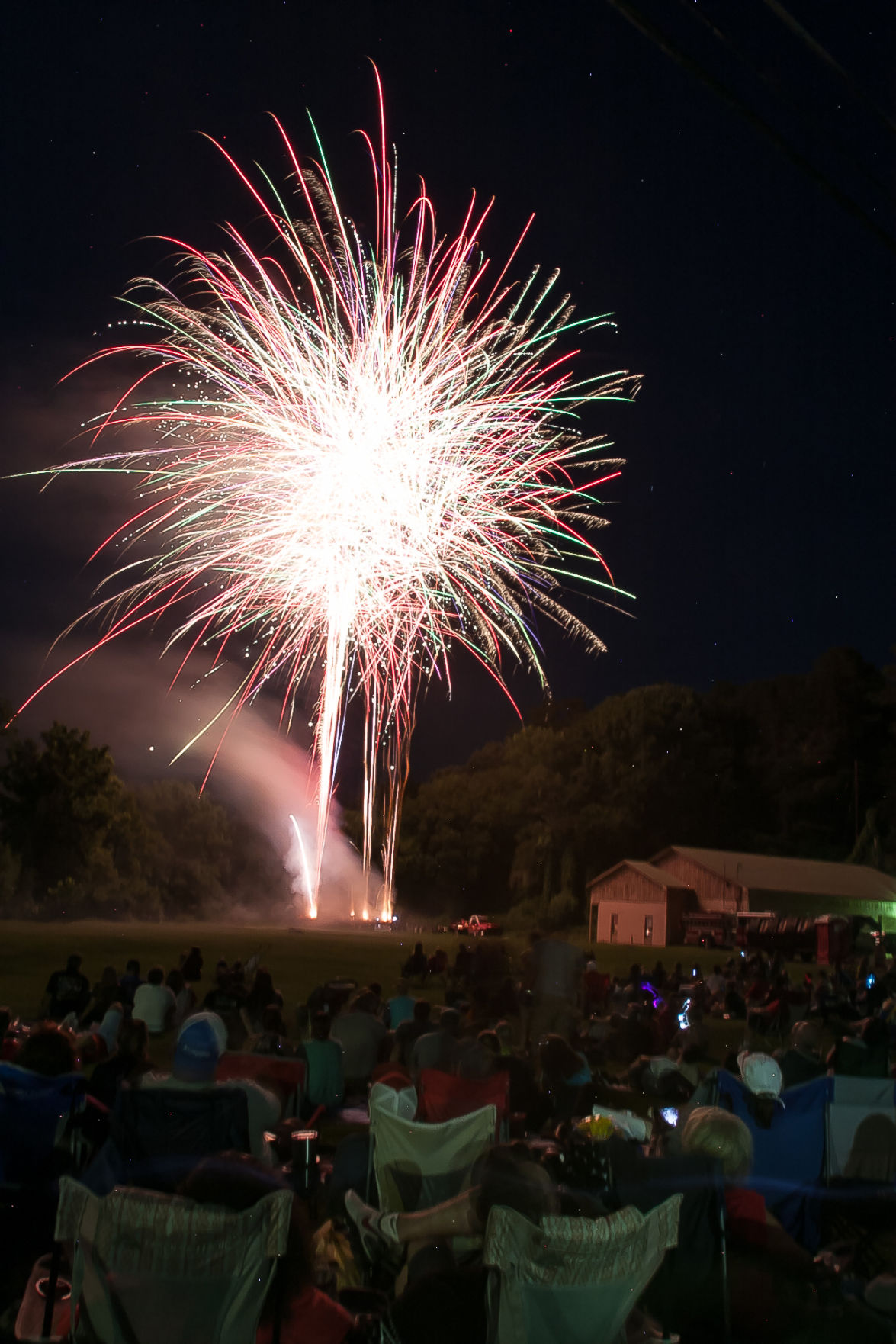 Onlookers sit back and enjoy the fireworks in Rolater Park in this file photo from 2018. 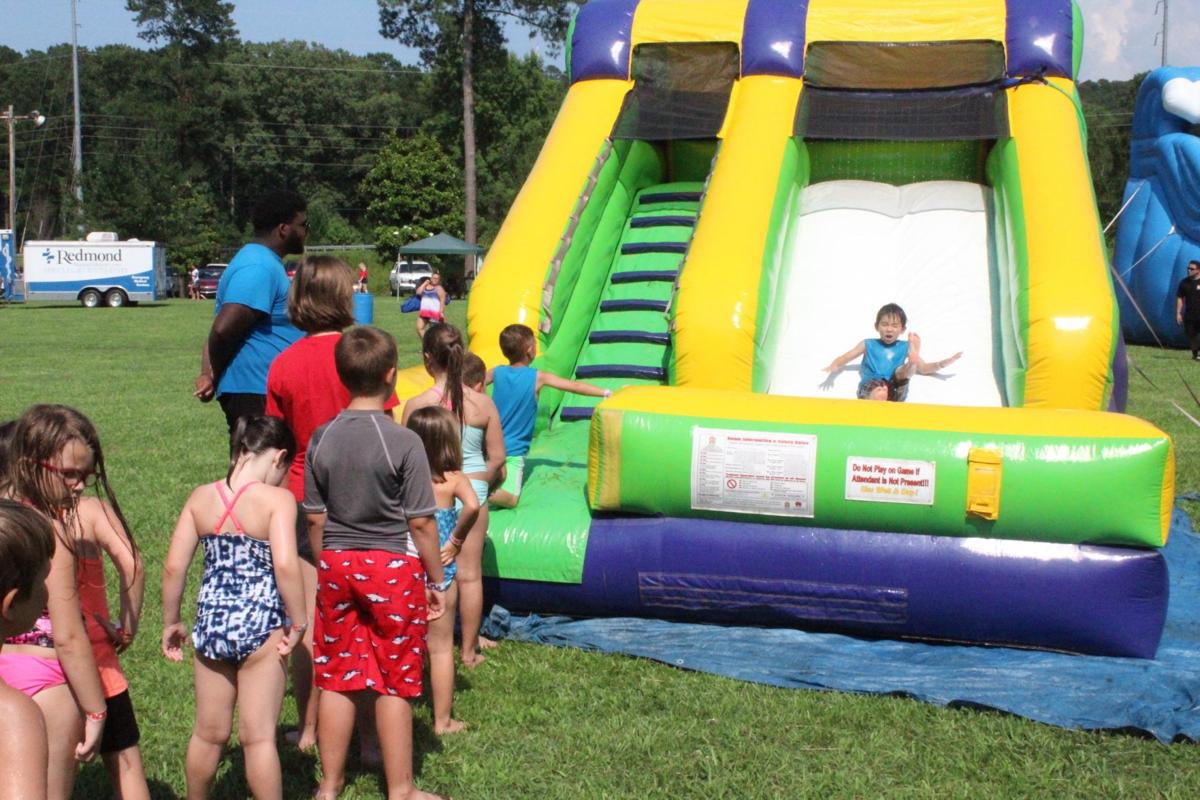 Inflatables were a big draw for the kids during the Patriotic Party in the Park at Ridge Ferry Park on July 4 in 2018.

Onlookers sit back and enjoy the fireworks in Rolater Park in this file photo from 2018.

Inflatables were a big draw for the kids during the Patriotic Party in the Park at Ridge Ferry Park on July 4 in 2018.

Independence Day celebrations abound in and around Floyd County, starting with a festival and fireworks Friday in Cedar Bluff, Alabama.

“I like to put my boat in the water and watch from (Weiss Lake). It’s beautiful,” said Cave Spring Mayor Dennis Shoaf.

Cedar Bluff’s Liberty Day runs from 4 to 10 p.m. Friday, with fireworks starting at 9 p.m. There’s a car show, inflatables for the children, craft and food vendors and a live band on the schedule.

Cave Spring’s fireworks are set for Saturday night, but Lindale would be a good first stop of the day.

A festival on Lindale’s South First Street will run from 9 a.m. to 1 p.m. Crafters and food vendors — think barbecue, watermelon, kettle corn and deep-fried Oreos — will be set up, along with a Kids Corner.

“The parade is free and everyone is invited to participate,” said Tim Reynolds, president of Restoration Lindale. “We ask you decorate your entry in an appropriate American theme.”

Following the parade, there will be a memorial ceremony and wreath-laying service at 11:30 a.m. at the World War II plaques in front of the Gilbreath Recreation Center on Garden Avenue.

Cave Spring’s festivities kick off at 1 p.m. with the Southern Style Sweetheart Cloggers, followed by the Miss Liberty pageant at 2 p.m. There are nine categories, from 6 months to 18 years.

All of the early events will take place at the gazebo downtown. The WhataDance! Studio Cloggers are set for 4 p.m. and Cake Dance, a rock band geared to dancing, takes over at 7 p.m.

The fireworks are due to start at 9:30 p.m. Shoaf said they’ll be shot off from the old fire station across from City Hall, so there are plenty of good spots for viewing.

“Anywhere around (Cave Spring Elementary School) is good, at KC’s, the parking lot at City Hall ... Come early, though. All the shops will be open and we’ll have live entertainment going on.”

Waterslides, free watermelon, a dunking booth, sack races, food vendors and a cornhole tournament are planned. The tournament is $20 a team. Small Town Rumor will perform at 7 p.m. Fireworks start at 10 p.m.

The annual Salute to America concert is set for 6 p.m. Sunday at Cave Spring Baptist Church across from Rolater Park.

Organizer Christa Jackson said GI Jive, a trio of women reminiscent of The Andrews Sisters, will perform “Boogie Woogie Bugle Boy” and other WWII favorites. A highlight is the salute to veterans, where the flag of each branch is brought out and veterans stand while the theme is played.

“There will be lots of great solos by locals who can really sing and some little things the kids can do. And it’s free,” Jackson said.

The event — billed as “food and fellowship” — will wrap up with an old-fashioned community singing of “God Bless America.”

The free Independence Day celebration in Rome — Patriotic Party in the Park — is scheduled from noon to 11 p.m. on Wednesday, July 3, in Ridge Ferry Park.

The Armuchee Ruritan Car Show, food vendors and inflatables area will open first. Craft vendors will be set up by 3 p.m. and registration for the games starts at 4 p.m. The hula hoop and cornhole contests begin at 5:30 p.m.

Fireworks are set for 9:50 p.m., with Dover and Cochran closing out the evening in song starting at 10:10 p.m.

The Rome Braves meet the Asheville Tourists at 7 p.m. Thursday, July 4, at State Mutual Stadium. The highlight of the night will be an Independence Day celebration and major fireworks show after the game.

Before that, the 34th annual Cave Spring Fourth of July Parade is set for 9 a.m.

“It’s a free-for-all. Anyone can join in,” Mayor Dennis Shoaf said. “It’s truly a grassroots parade.”

Line-up is at 8:30 a.m. Motorized vehicles and horses — they must be diapered — meet on Perry Farm Road. Walkers gather at Joe Hill’s Lawn Mower Shop at the Old Depot on Alabama Street. The best place to watch is from the Town Square.