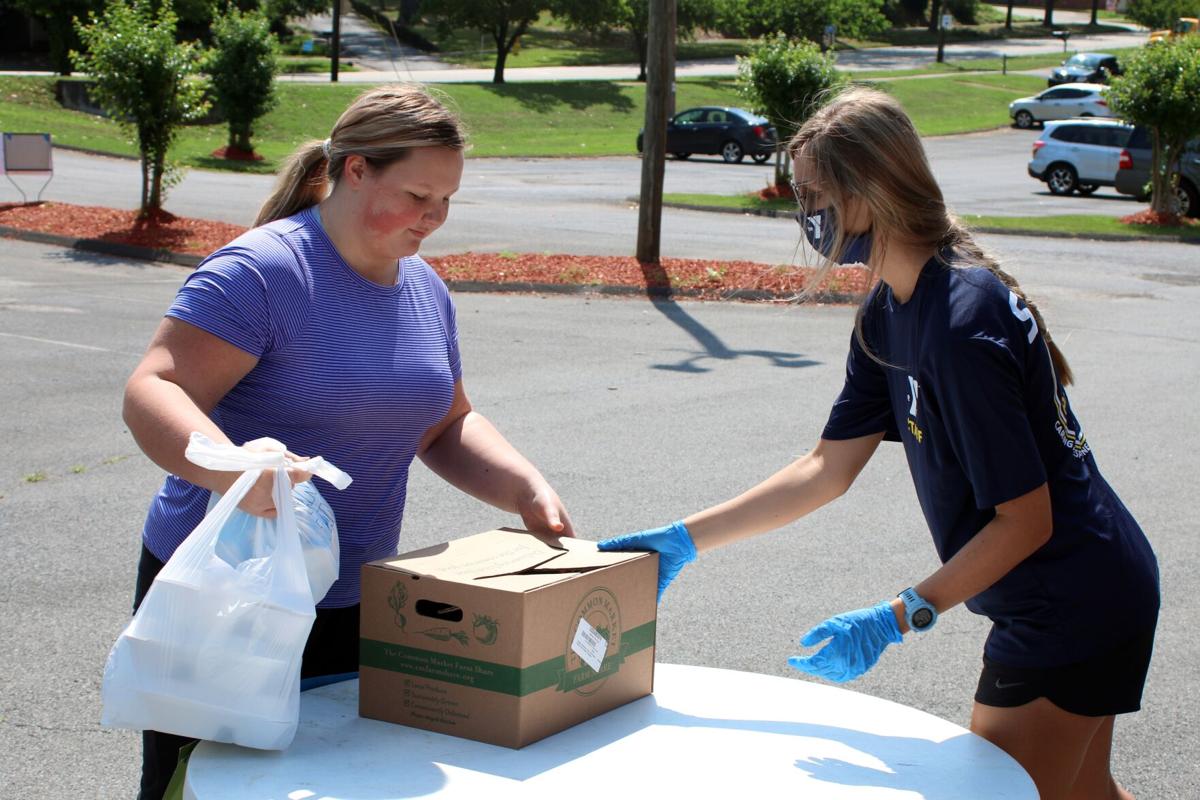 In this June 2020 file photo Floyd County Schools student Jaeleigh Wiggins (left) picks up free meals and a box of fresh produce from Rome-Floyd YMCA staff member Allie McDermont at the facility on East Second Avenue. The YMCA partners with both Rome City and Floyd County schools to distribute meals and food boxes to any child under 18 on Mondays and Thursdays. 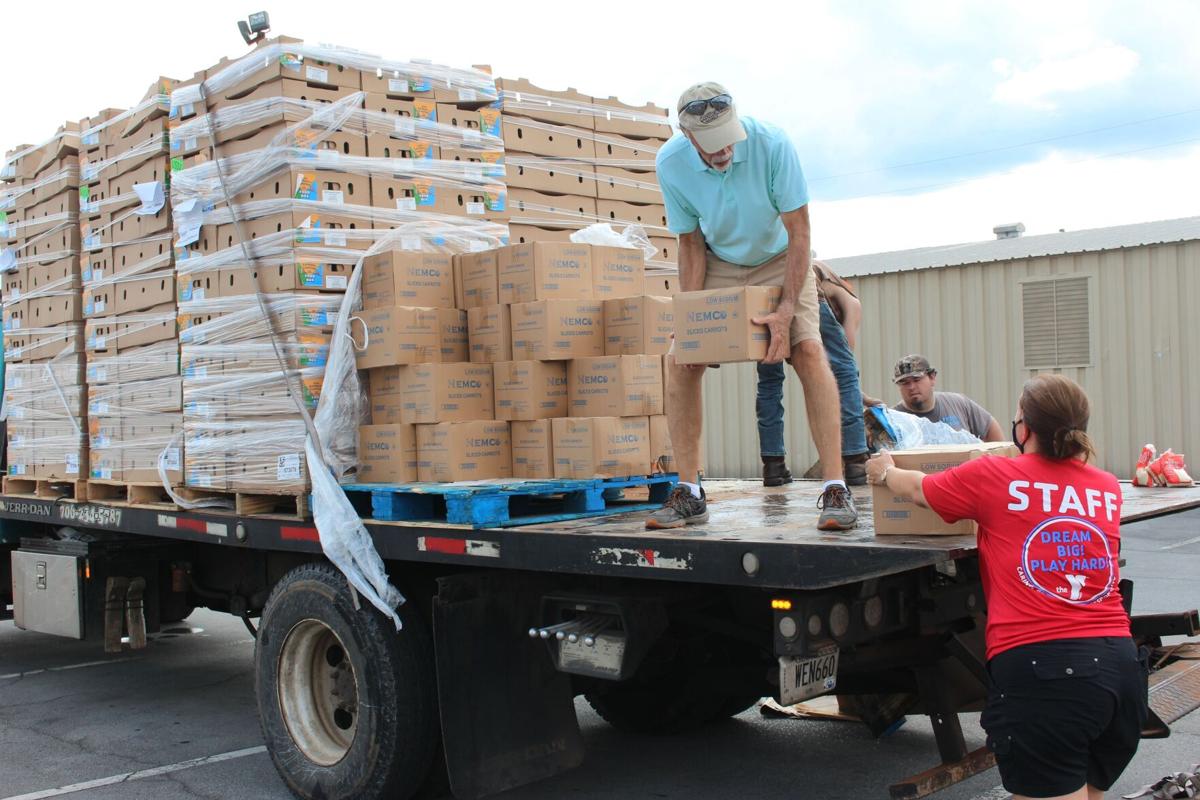 In this September 2020 file photo, pop-up market volunteers Greg Helms and Jennifer Jolly unload the first set of boxes before tackling the pallets of Farmers to Family boxes at the Coosa Valley Fairgrounds.

In this June 2020 file photo Floyd County Schools student Jaeleigh Wiggins (left) picks up free meals and a box of fresh produce from Rome-Floyd YMCA staff member Allie McDermont at the facility on East Second Avenue. The YMCA partners with both Rome City and Floyd County schools to distribute meals and food boxes to any child under 18 on Mondays and Thursdays.

In this September 2020 file photo, pop-up market volunteers Greg Helms and Jennifer Jolly unload the first set of boxes before tackling the pallets of Farmers to Family boxes at the Coosa Valley Fairgrounds.

It was a special day when donors dropped off string cheese at the Rincon Library outside Savannah. Luxury items like that weren’t always on the menu at the COVID-19 pandemic’s peak this past summer, when the library-turned-food bank was often serving 90 meals a day to Rincon’s neediest children.

“They were super excited,” said Cathy Driggers, the library’s branch manager. “It was just a little treat that they normally didn’t get.”

Food banks in Georgia have seen demand soar since the start of the pandemic in March, when the virus shuttered schools and work shutdowns drove people to joblessness. Among the state’s most vulnerable to going hungry are children from poor families who rely on free meals from school for their daily diet.

Even as in-person classes resume, many schools are still leaning on food deliveries and help from community groups like local food banks to keep kids fed – especially as coronavirus outbreaks in Georgia begin flaring up again this winter.

“We have done an amazing job of feeding kids, but knowing that we’re not getting to everybody is disheartening,” said Beth Moore, communications manager for the Clarke County School District. “We can only do what we can do, and we’re doing that to the best of our ability.”

The amount of food being served to the more-than 1 million Georgia school children eligible for federally funded free meals has declined 40% to 45% since March, said Linette Dodson, the state Department of Education’s school nutrition director.

With relaxed federal rules on meal deliveries, local schools like those in Savannah are still shipping out food with their buses and at pick-up locations to reach as many students attending virtual classes as possible, said Onetha Bonaparte, school nutrition director for the Savannah-Chatham County Public School System.

That district has dished out nearly 1.5 million meals mostly from school buses since March, said Bonaparte. But that is still much less than the roughly 36,000 meals served daily before the pandemic. And many of the district’s 38,000 students have opted to stick with online classes, creating challenges for a school population needing food both on campus and at home, she said.

“We know the ultimate goal is to get the students fed, and if we can do that, nothing else really matters in our department,” Bonaparte said. “We’re going to keep going until they tell us to stop.”

Georgia schools won’t technically have to stop until at least July 2021 when current U.S. Department of Agriculture waivers allowing remote meal services end. That will be helpful for districts like the DeKalb County School District, where all roughly 100,000 students are still taking virtual classes.

DeKalb schools, where three-fourths of the student body qualifies for free meals, have set up 30 food-production sites to serve up hundreds of meals three times a week that ship out on 336 different bus routes for deliveries, said the district’s nutrition director, Connie Walker. The district also taps into a network of churches, county agencies and other groups to help reach more children.

Still, the district has only been able to serve about 19% of the students who normally receive free meals, even with tireless work from school staff and outside groups that have transformed DeKalb’s meal program since March, Walker said.

“We want to do more and I think we’re doing a great job,” Walker said. “But we still have not reached the total population.”

Some pressure on schools has been eased by a pandemic-specific federal program that gives families a one-time $256 payment to buy food for students eligible for free meals or already receiving Supplemental Nutrition Assistance Program benefits, according to several local district administrators.

The Pandemic Electronic Benefit Transfer program distributed more than $290 million in benefits to around 750,000 children before ending in mid-September, according to the state Division of Family and Children Services. It has since been extended for the 2020-21 school year, and state officials are hashing out how to continue dispersing funds.

With local schools facing limited resources, food banks in Georgia that stepped up to help plug the meals gap have seen a 50% increase in demand since the pandemic started, said Danah Craft, executive director of the nonprofit Georgia Food Bank Association.

Nearly half of Georgians seeking meals from food banks are doing so for the first time in their lives, highlighting how rates of food insecurity in the state have risen 26% for the entire population and 39% for children, Craft said. That increase comes as food banks worry the amount of food provided by the USDA could soon decrease by 50% without more federal emergency relief funding.

“We know there are kids who are continuing to fall through the cracks,” Craft said. “And our network has not experienced any easing in the demand. We’re still seeing an unrelenting need for food.”

That need has cropped up consistently for a host of food banks and other service organizations throughout the state such as the nonprofit Feeding the Valley Food Bank, which covers 18 counties in west-central and south Georgia including the hard-hit Albany area.

Amid the challenges, many school officials and food-bank workers see a silver lining in the tightened collaboration that has formed between community groups to feed as many kids as possible during the pandemic. Driggers, the library manager in Rincon, certainly hopes those ties will continue long after vaccines render the virus less destructive.

“Doing this has really showed us what a substantial need this is right now,” Driggers said. “I’d hate to think that anyone’s child is walking in a grocery store and still walking out hungry.”

EXPLAINER: Election claims, and why it's clear Biden won

Confederate monument to be removed from Lawrenceville square

The Brookhaven Police needs your help finding this missing man