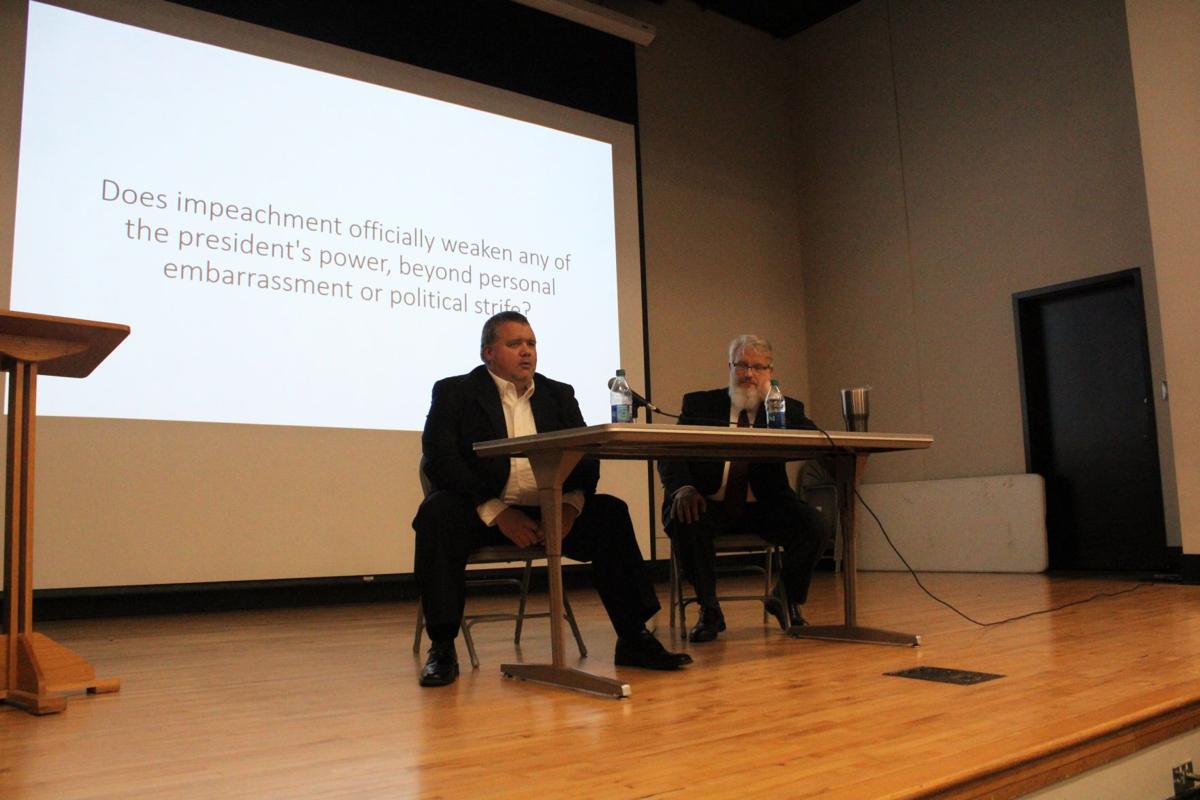 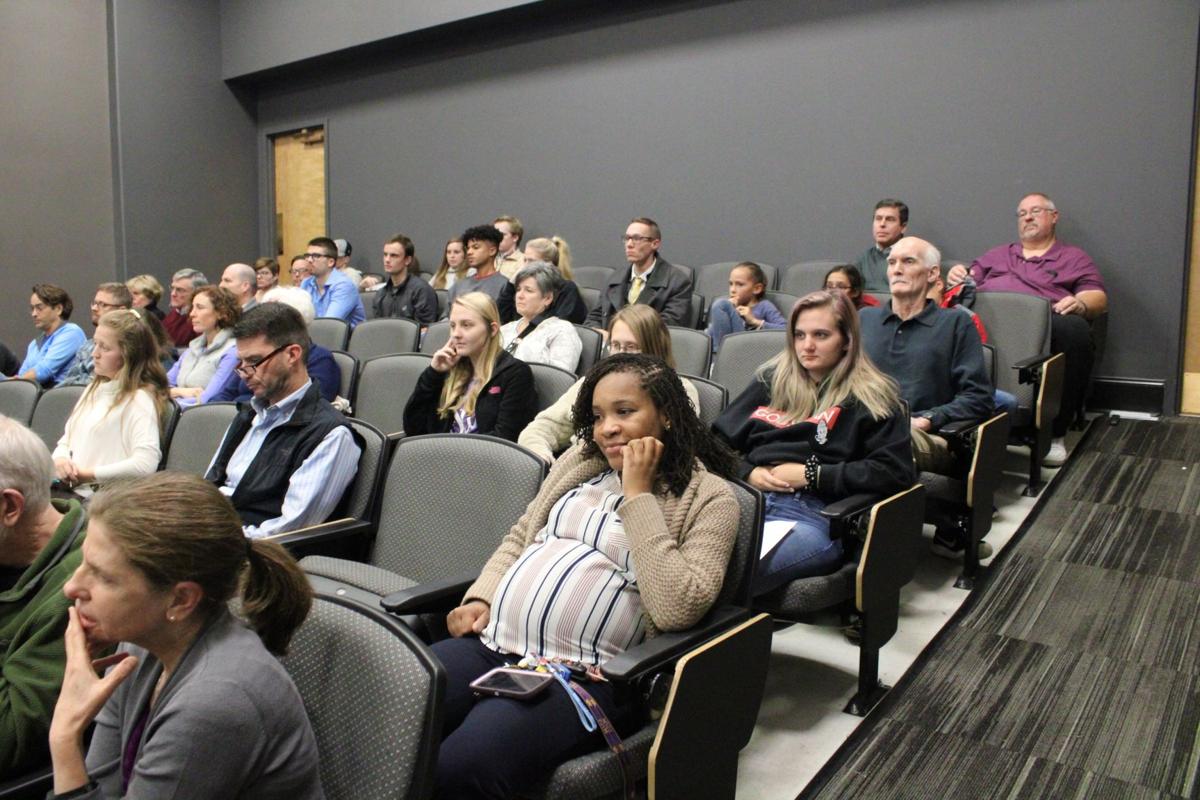 An audience of more than 70 people showed up to listen to a discussion about impeachment at Berry College. 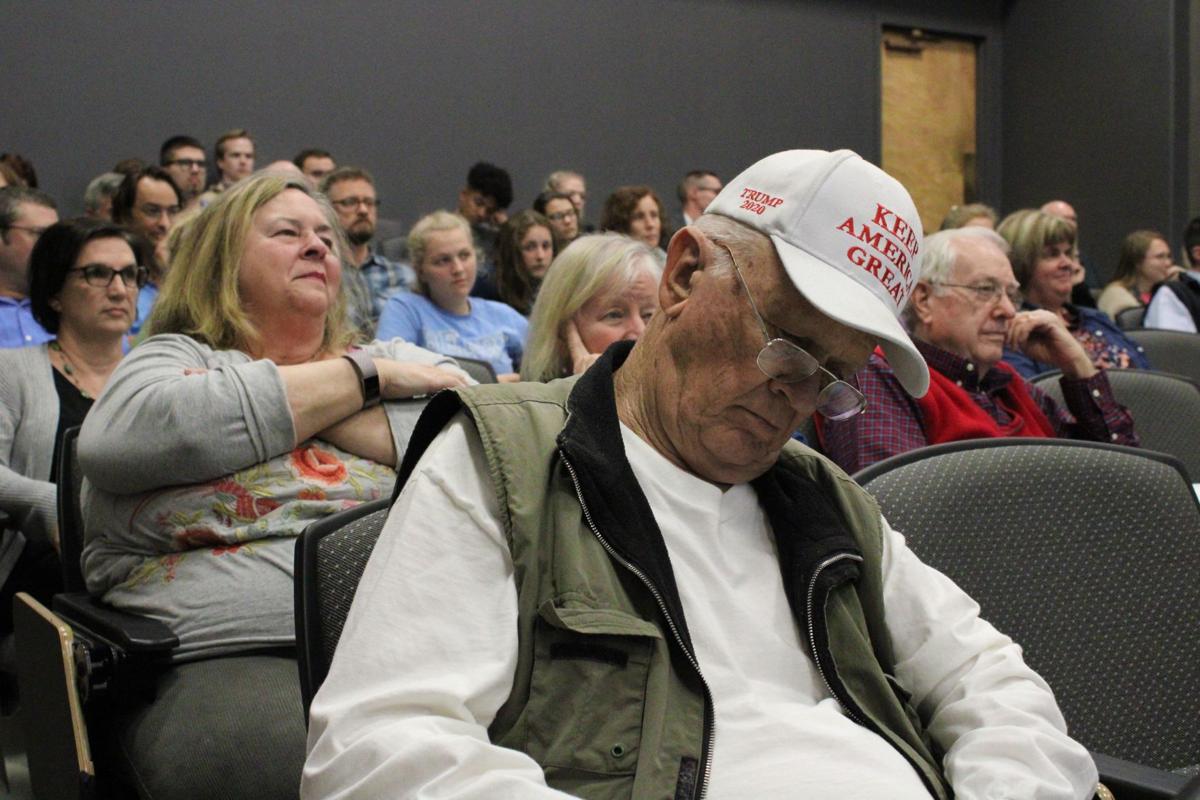 Grant Evans, who wears hat for the campaign to re-elect President Donald Trump, takes notes at a discussion about impeachment at Berry College.

An audience of more than 70 people showed up to listen to a discussion about impeachment at Berry College.

Grant Evans, who wears hat for the campaign to re-elect President Donald Trump, takes notes at a discussion about impeachment at Berry College.

Those were the questions at hand at Berry College last week when associate government professors Michael Bailey and Eric Sands held a discussion titled “Impeachment in an era of toxic partisanship.”

“Impeachment is whatever Congress says it is,” said Sands. “The dearth of impeachment and the parts and use of impeachment has made ascertaining the true meaning incredibly difficult.”

On Sept. 24, Speaker of the House Nancy Pelosi announced to the nation there would be a formal vote to pursue an impeachment inquiry against President Donald Trump.

Her letter expressed concerns about a July 25 phone call between Trump and President Volodymyr Zelensky of Ukraine. The call is described by House Democrats as an attempt to pressure the Ukraine government to open a corruption investigation against Democratic presidential candidate and former Vice President Joe Biden.

The House, which is currently controlled by Democrats, is expected to vote to impeach the President. However, many pundits say it is also likely that Trump will be acquitted in the Senate, much like Bill Clinton and Andrew Jackson.

“I think a college campus is a place where these conversations need to happen,” said Nate Pearson, the director of the Center for Integrity and Leadership at Berry College. He put the event together.

“We have a responsibility to be a place where people can come, think, and have different ideas,” Pearson said.

“Based on a report they (Democrats) have never seen, about a conversation they never heard, from a person they have never met, the Speaker and her following have decided to drag our country into a mess,” he said in a statement on his website. “The reckless pursuit of impeachment simply hurts our country and nobody wins.”

Graves does not serve on any committees pertaining to the impeachment inquiry.

The Berry discussion — including its promised look at “toxic partisanship” — drew in more than 70 people from the Floyd County community. The integrity of the impeachment hearing has been questioned, and even Sams had his own questions about it.

Floyd County voted overwhelmingly in favor of Trump in the 2016 election. Democrat Hillary Clinton only received 26 percent of the vote.

“There are some things about this impeachment inquiry and this impeachment hearing that are peculiar,” said Sands. “The fact that it’s being done in front of the Intelligence Committee is awfully strange.”

Sands said the rumor is that the current chair of the House Judiciary Committee, Democrat Jerry Nadler of New York, is “too soft for the job.” But Sams said that doesn’t explain why the role was assigned to Intelligence Committee Chair Adam Schiff, D-Massachusetts.

“To answer the question of should he be (overseeing the inquiry), I guess it depends on whether you want the impeachment to be successful or not,” he continued. “But is he bringing fairness and integrity to the process? I think there are some questions that are being raised and should be raised about the way that he’s presided over the hearings.”

Billy Cooper, a community member who attended the event, said he would have liked to hear more discussion about the role the media has played in the way the impeachment hearings have gone.

“Media has such an impact in politics today,” said Cooper. “If we look at the impeachment process here, the media is having a huge impact. Every morning on the morning news, what do you get? The latest polls, right? I do believe that media companies are in the business of making money and they have editorial viewpoints.”

He said his perception is that Fox News has a more conservative bias while CNN has a liberal bias.

Cooper’s friend Steve Conrad said that Sands helped him learn more about the intent of the Founding Fathers.

“They did not just think things and do things off the cuff,” Conrad said. “ They were products of their heritage, their time, and they were trying to piece together something new that had never been done before.”

This story has been edited to correct the name of a Berry College professor as well as to correct the list of U.S. Presidents who have faced impeachment.

How Biden chose Harris: Inside his search for a running mate

Back to school: Classes resume in Calhoun, Gordon County