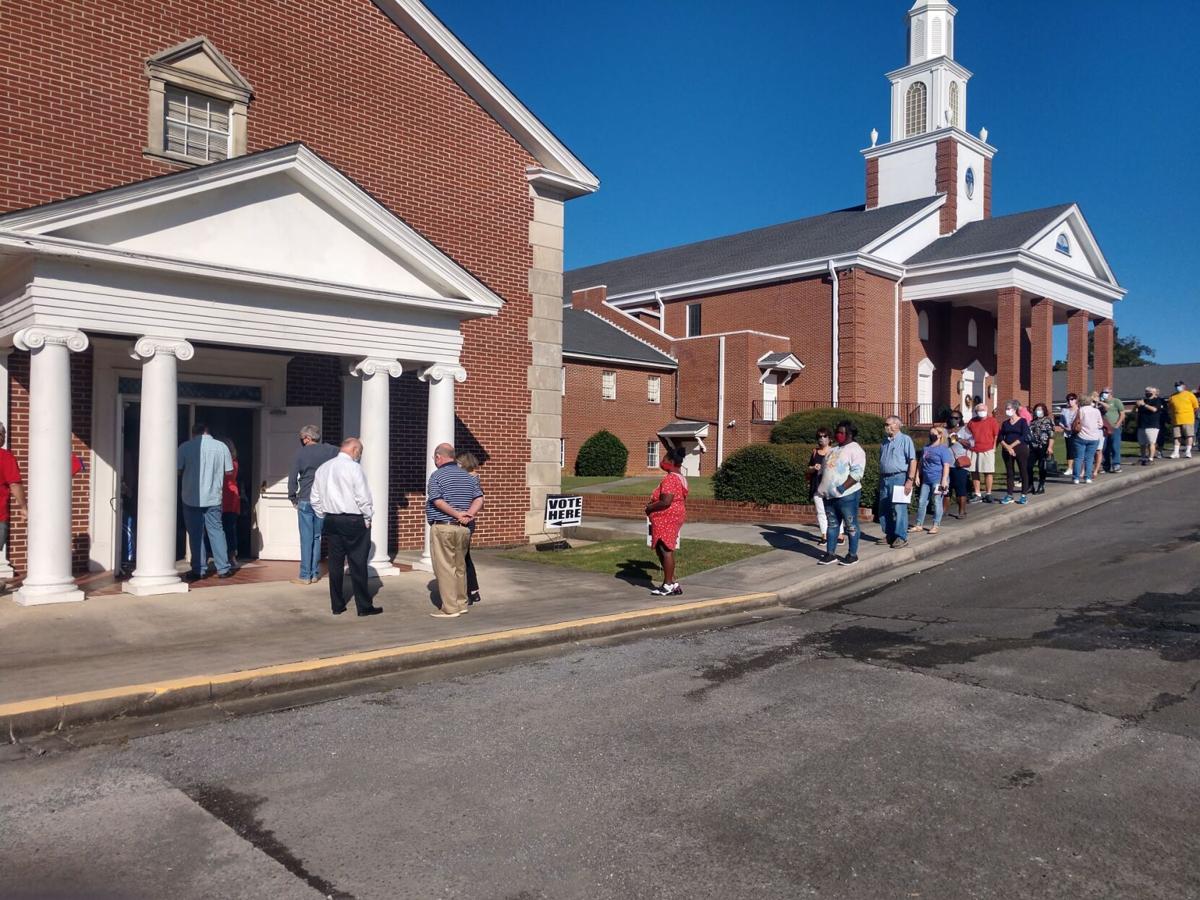 Voting lines at Garden Lakes Baptist Church as of 10 a.m. 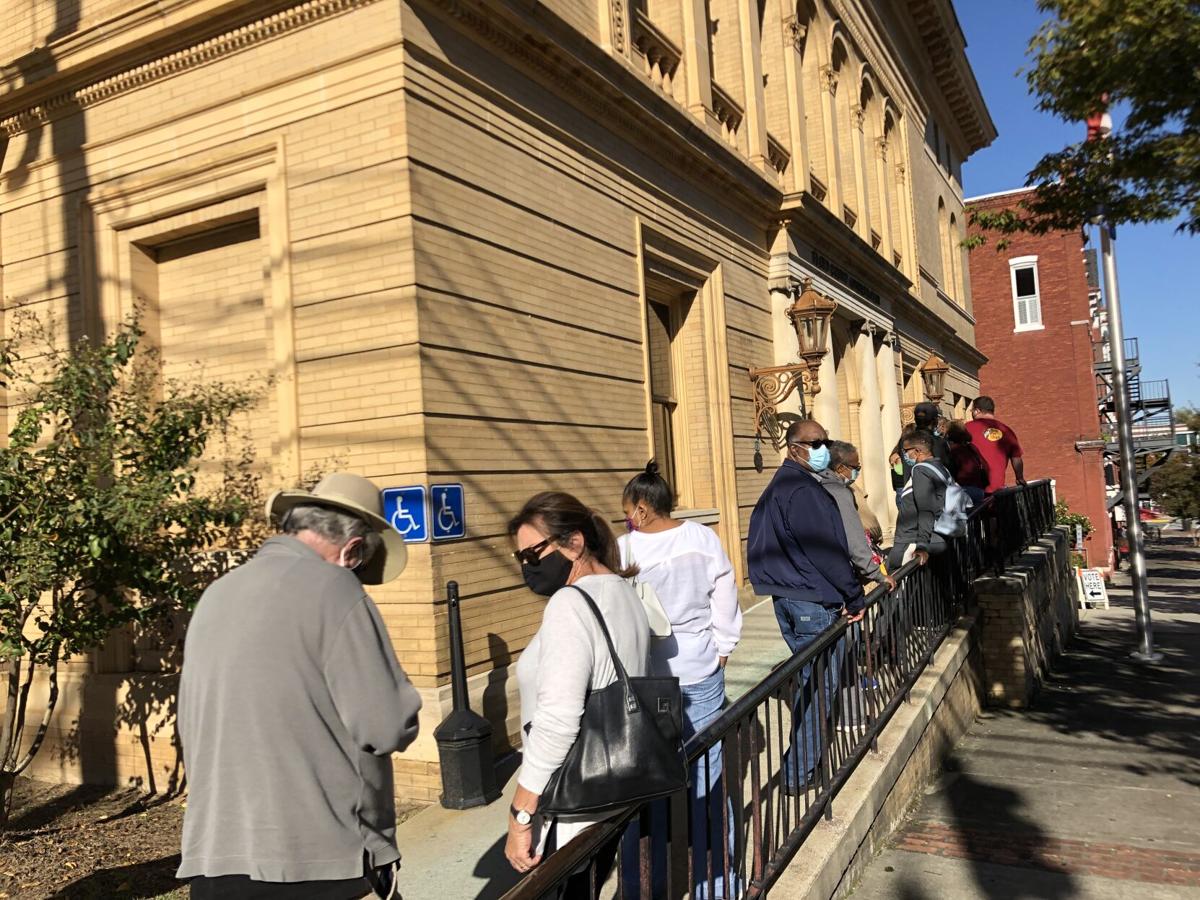 People were reporting long wait lines at the downtown location for early voting early Tuesday. Several people who left at 10 a.m. reported they had arrived and been in line since 8:15 a.m.

Voting lines at Garden Lakes Baptist Church as of 10 a.m.

People were reporting long wait lines at the downtown location for early voting early Tuesday. Several people who left at 10 a.m. reported they had arrived and been in line since 8:15 a.m.

Three people leaving the downtown location at the county administration building at 10 a.m. said they'd arrived around 8:15 a.m. Others waiting in line outside Garden Lakes Baptist Church said they'd been there for an hour and a half and still hadn't gotten to vote.

Technical issues appear to be the cause of the issue, especially at the Garden Lakes precinct, and cancelling out absentee ballots at polling locations are slowing an already slow system down even more, Floyd County's elections chief Robert Brady said.

Every voter who requests a mail-in ballot but shows up in-person must formally cancel their ballot by signing an affidavit, which adds more time to the already long waits at precincts

At least one person, who asked not to be identified, said they had not requested an absentee ballot but the system showed they had.

Elections board member Melanie Conrad said from what she saw the laptops used to check in voters were operating slow or going down. They were attempting to determine whether or not it was a computer or system issue as of early Tuesday.

Poll managers had requested more laptops and she has contacted the county to request more laptops for polling locations. However, if the overall system is the issue, she said, she is not sure if that will fix the situation.

Voter interest is slowing down their computer system as well.

"Expect lines to be long," Brady said. He asked that people who have requested absentee ballots drop them off at drop box locations at the county administration building and the library.

Approximately 525 Floyd County residents voted Monday. There were average wait times of 2 and a half to 3 hours on Monday.

Regionally, elections officials reported that wait times to vote were much shorter.

Shea Hicks, chair of the Gordon County Board of Elections and Voter Registration Office, said 652 voters showed up to vote in person on Monday with an average wait time around 30 minutes. On Tuesday, they had worked out some issues and voters were getting in to vote in around 10 minutes.

More than 128,000 people piled into polling places across the state to kick off the three-week stretch of early voting, according to Georgia Secretary of State Brad Raffensperger’s office.

It was a record number of first-day ballot casters who turned out amid the lingering health terror of coronavirus and unprecedented nationwide doubt in the legitimacy of voting processes in the United States.

On top of that, droves of voters had requested absentee ballots prior to arriving in-person at polling places Monday, representing a fraction of the roughly 1.6 million Georgians seeking to vote by mail amid the pandemic.

People standing in line outside the Floyd County Administration Building around noon said they had been waiting upwards of an hour or more as the queue extended down toward Broad Street.

The vendor made a last minute adjustment to the electronic pollbooks used to check in voters, she said, and the data wasn’t pulling up as it should.

“It’s essentially a statewide issue,” Conrad said. “The vendor made some changes last Friday and so the poll pad information wasn’t coming up correctly. We’re trying to work with that situation to try and get that fixed.”

Problems with the electronic pollbooks were among the issues that contributed to long lines across the state during the June primary election, along with high turnout, consolidated polling places and shortages of poll workers. Conrad said that, locally, the lines were not due to a shortage of poll workers.

Poll watchers reported that only one computer was available to check in voters at the County Administration Building and at Garden Lakes Baptist Church, leading to delays. Conrad said they installed a hotspot at the church to fix the additional connectivity issue there.

The elections board will likely discuss the issues at their board meeting on Thursday at noon. The regular monthly meeting had been scheduled for Tuesday but was bumped to Thursday after the polling problems emerged, and moved to the spacious Berry Shorter Room of the Forum River Center, 301 Tribune St. in downtown Rome.

Robert Brady, the county’s chief election clerk, told the Associated Press the pollbook issue initially slowed things down but it was resolved within about an hour.

“Typically in Floyd County, you have a line that lasts five minutes. Today it’s taking up to 30 minutes,” Brady said. “It’s because of the huge — and I’m talking about huge — turnout.”

However, people reported standing in lines an hour or more at the county’s polling locations well past noon.

In-person voting began Monday and runs through Oct. 30. Voters can cast their ballots at either the Floyd County Administration Building Community Room at 12 E. Fourth Ave. or Garden Lakes Baptist Church at 2200 Redmond Circle, from 8 a.m. to 5 p.m. during the week.

The Associated Press reported that issues arose early across the state.

Election officials in Fulton County were aware of an issue with the electronic pollbooks used to check voters in at State Farm Arena, where the Atlanta Hawks NBA team plays, county spokeswoman Jessica Corbitt-Dominguez said. Technicians were on site working to resolve it, she said.

The line began moving when the arena opened for voting at 8 a.m. and some voters were able to cast their ballots, but things ground to a halt a short time later when the pollbooks stopped working with hundreds of people waiting. By mid-morning, the problem appeared to have been resolved and the lines had cleared at the arena, which is the largest early voting site in the state with 300 voting machines.

Some people lined up before dawn to be among the first to participate in early in-person voting, which runs through Oct. 30 in Georgia. Turnout also may have increased because Monday is a federal holiday, so more people are off work.

While voters must vote at their assigned polling place on Election Day, they can vote at any voting site in the county where they live during early voting.

With record turnout expected for this year’s presidential election and fears about exposure to the coronavirus, election officials and advocacy groups have been encouraging people to vote early, either in person or by absentee ballot.

Natalie Rawlings, 49, started the morning at a library offering early voting in Atlanta, but said there was no parking and a long line. So she decided to head to State Farm Arena. She got in line, and it didn’t move for 45 minutes.

She said someone came out and announced that there was a “known software issue” they were hoping to work through. A handful of people left, but most stayed. Overall, it took Rawlings about an hour and a half to vote, but she said she’d waited in line longer during early voting in Florida, so she wasn’t frustrated.

“I’m outside. It’s a nice day. They’re giving water away. There are worse things. And everybody is appropriately socially distanced,” she said.

Rawlings, a Democrat, said she feels this election is more important than others because of the “coarseness” of the language she’s heard from President Donald Trump and his seeming lack of respect for other branches of government and world leaders: “It’s gotta end.”

“We’d prepared as much as we could, but there’s only so much space in the rooms and parking in the parking lot. We’re maxing out both of those,” Eveler said.

“People are double parking, we have gridlock pretty much in our parking lot,” she added.

In Macon, Seth Clark arrived to vote at the main election office at about 9:30 a.m. Monday and found a U-shaped line wrapping around the parking lot. He was still waiting 90 minutes later, estimating he’d gotten through only about half the line.

“I’ve never seen this many people on the first day of early voting,” said Clark, who won election over the summer to a nonpartisan seat on the Macon-Bibb County commission.

♦ U.S. Senate: 19 challengers look to unseat Republican Kelly Loeffler, who was appointed to fill the seat by Gov. Brian Kemp. Among those who are polling the highest are Democrat Raphael Warnock and Republican Doug Collins.

Voters can apply for absentee ballots through Oct. 30 on the secretary of state's website SecureVoteGa.com. Ballots must be returned by 7 p.m. on Election Day to be counted.

To track your absentee ballot, go to https://georgia.ballottrax.net/voter/. That website will show whether or not you have requested an absentee ballot, when it is sent and when the ballot is received by elections officials.

Once you receive your ballot and fill it out, you can either mail it to the elections office at 12 E. Fourth Ave. using the United States Postal Service or drop it off at one of the two ballot boxes -- outside the elections office and the Rome-Floyd County Library at 205 Riverside Parkway.

In-person voting starts on Oct. 12 and runs through Oct. 30. Voters can cast their ballots at either the Floyd County Administration Building Community Room at 12 E. Fourth Ave. or Garden Lakes Baptist Church at 2200 Redmond Circle, from 8 a.m. to 5 p.m. during the week.

The county administration building and Garden Lakes Baptist Church also will be available to voters the weekends of Oct. 17-18 and Oct. 24-25.