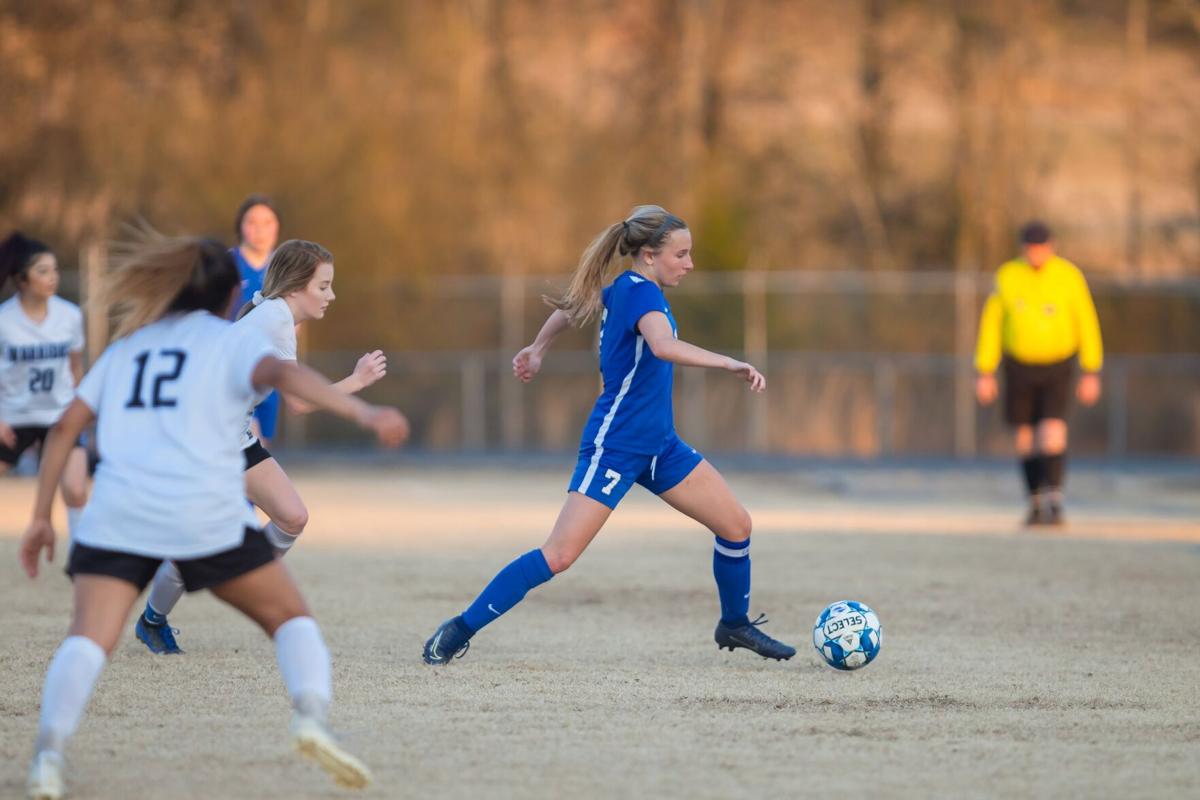 Model’s Lauren Akemon controls the ball during a Region 7-AA game against Gordon Central at Model High School on Tuesday. 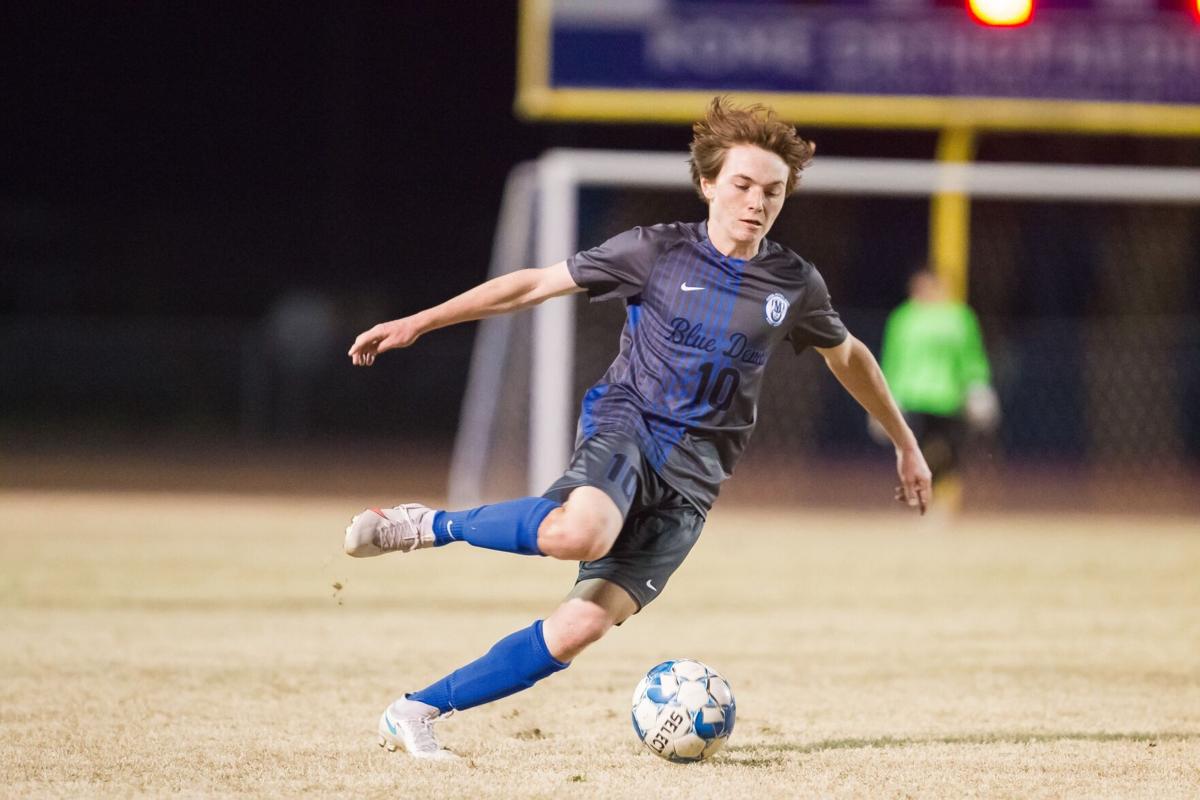 Model’s Lauren Akemon controls the ball during a Region 7-AA game against Gordon Central at Model High School on Tuesday.

Model soccer split home games against Gordon Central High School Tuesday, as the Lady Devils run the win streak to 10 games and the Model boys were shut out.

The Model Lady Devils are 10-0 after defeating the Gordon Central Lady Warriors 3-1 at Woodard-Tuggle Stadium.

"This was a very important game for us," Lady Devils head coach Ian Crawley said. "We know we've got to play well in order to well against Gordon Central, so we emphasized to the girls that we need to play smarter and faster and out-possessed the ball and they brought it."

After a scoreless first half, Model quickly jumped on the board, breaking the deadlock 25 seconds into the first half, as senior Lauren Akemon scored her first of two goals on the evening.

"We felt like we were watching the game (in the first half) instead of playing it, and so we wanted to get our energy matching to each other once the game started," Akemon said. "Right when the ball is kicked off, we wanted to go straight for that goal. It felt really good and it was the most electric play to have."

"Believe it or not, we asked them to get one in two minutes (and) they came out and got one in 25 seconds," Crawley said. "Traditionally with us, once we break the ice, the other ones tend to come a little bit easier."

Model would add another on an own-goal by Gordon Central to make it 2-0 less than seven minutes into the second half. Model's Ashley Vicente would get credit for the tally.

The Lady Warriors cut the deficit in half when Cora Stepp scored on a high-arching, left-footed shot that found space in the top right corner of the goal with 28 minutes to play.

Akemon, however, had Model's response in quick fashion, scoring off a free kick 58 seconds after GC's strike to make it 3-1, which would hold for the remaining 27 minutes.

Model remains atop Region 7-AA as the lone undefeated.

"I think our love for each other really does keep it going," Akemon said. "We try to fix if we ever have any issues, which we rarely do, we try to fix them right away. We're out here to have fun, but also it's fun with all the talent we have. We're super excited for state (playoffs) and we want to go super far in it so we want to do our best in region play to get there."

In the nightcap match of region undefeateds, the Blue Devils found themselves on the losing end of a 0-1 physical, grueling battle at the hands of the Gordon Central Warriors.

"That shows me we're able to compete with them," Blue Devils head coach Donnie Mendence said. "We knew going in that they're one of the top teams ... in the region, but we knew that they were one of the top teams in the state as well. We knew this was a big game, especially looking forward to a possible playoff matchup. First round, you might have Pace (Academy) or Lovett, so we're really trying to be one of those top two seeds."

Gordon Central's Zeke Parada scored the contest's lone goal 4:32 into the first half. From there, both sides dug in with neither defense allowing much in terms of scoring chances.

"We had to keep our composure going down early," Mendence said. "One thing you can't do is just let down or give up and then start giving up a lot of goals because this is the team, they will put a lot of goals on you if you don't play defense."

Model had two grade-A scoring chances on the night. The first came in the first half when a header from Liam Marshall and the second came at the very end of the second half.

In a last-second attempt, senior Edgar Reyes booted a free kick toward the GC goal. The ball took a bounce, but a diving save by Gordon Central's Armando Sanchez sealed the win for the Warriors.

"I've got a really solid defense and I knew I could count on them," Mendence said. "They did a phenomenal job all night. We've got to go back to work."

After a quick turnaround against Pepperell on Wednesday, Model is off until next Thursday, when the Devils host Coosa.

WASHINGTON (AP) — President Joe Biden said Tuesday that “never has there been more strain” on the U.S. Capitol Police as he honored Officer William “Billy” Evans, the second officer on the force to die in the line of duty this year.

The Club for Growth Foundation welcomed its incoming 2021 class of fellows, including Rome’s Dr. John Cowan.

LANSING, Mich. (AP) — The leaders of three-dozen major Michigan-based companies, including General Motors and Ford, on Tuesday objected to Republican-sponsored election bills that would make it harder to vote in Michigan and other states.

Former President Donald Trump slammed health officials Tuesday for halting Johnson & Johnson’s COVID-19 vaccine amid blood clot concerns — and dredged up an old election conspiracy as a possible reason for the pause. “The results of this vaccine have been extraordinary but now (its) reputation will be permanently challenged,” Trump said in an emailed statement. The former president urged the ...

Biden to detail pullout plans for last troops in Afghanistan

Greater Latrobe picks assistant to serve as next athletic director

Woodstock officials: masks will still be required in city facilities

What is Georgia’s favorite conspiracy theory?

DNR: Spring is the time to become 'BearWise'